b.good, a popular eatery on Greenwich Ave that opened in November, has partnered with Community Plates, an organization committed to ending American food insecurity by rescuing fresh, usable food that would otherwise be thrown away from restaurants, markets and other food industry sources. 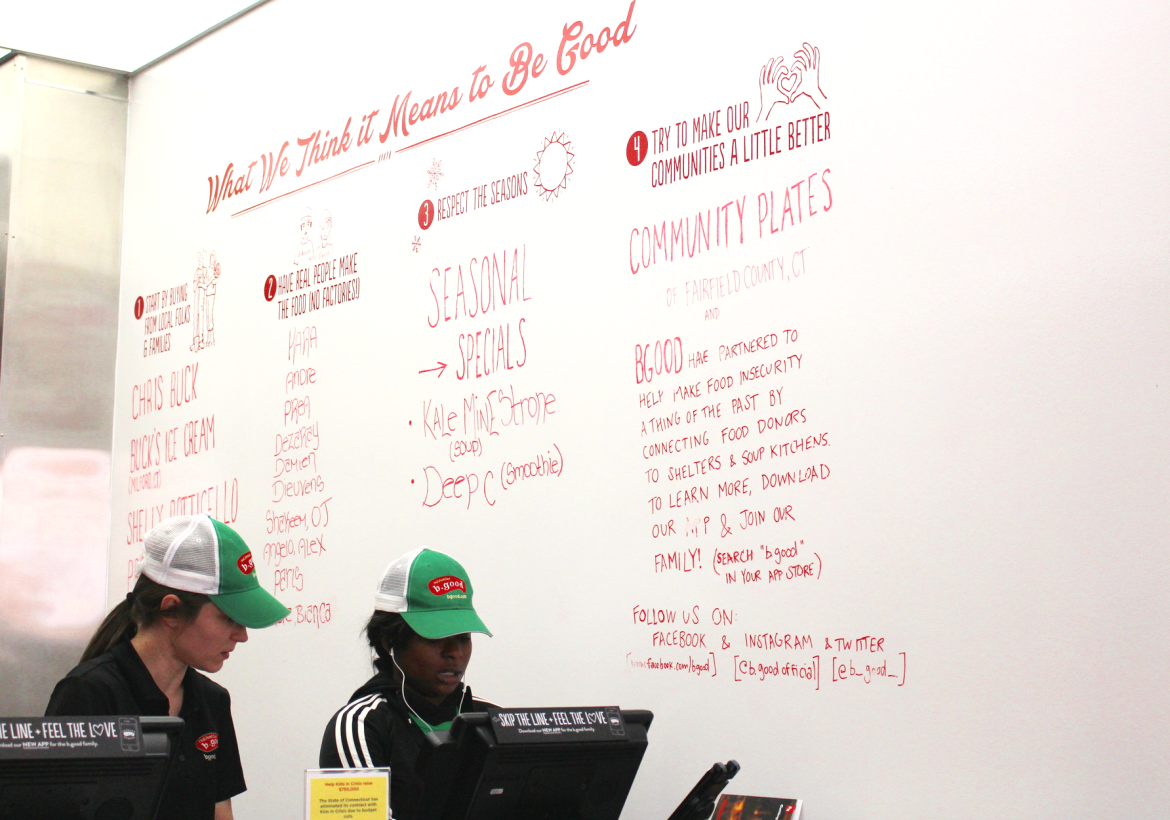 Along with three other b.good locations, the folks at the Greenwich location are donating food that would otherwise go to waste. Community Places volunteers will connect the food to receiving agencies including Pacific House in Stamford.

“March is volunteer month at b.good,” said Greenwich manager André Gainer, who mentioned he’s been inserting small flyers in the bags of his customers orders explaining how a food run works. All it takes is a few minutes, a smartphone and access to a car.

Mr. Gainer, who is already bitten by the volunteer bug, teaches cooking at the Boys & Girls Club of Stamford. He explained that b.good has a “Cousin program,” which feeds one child every day for life. His cooking students brainstormed a video about their class which won the Cousin program. “The class made, edited and submitted a video and the entire class is ‘the cousin,'” he said. “b.good supplies the food for the cooking class the first week every month.” 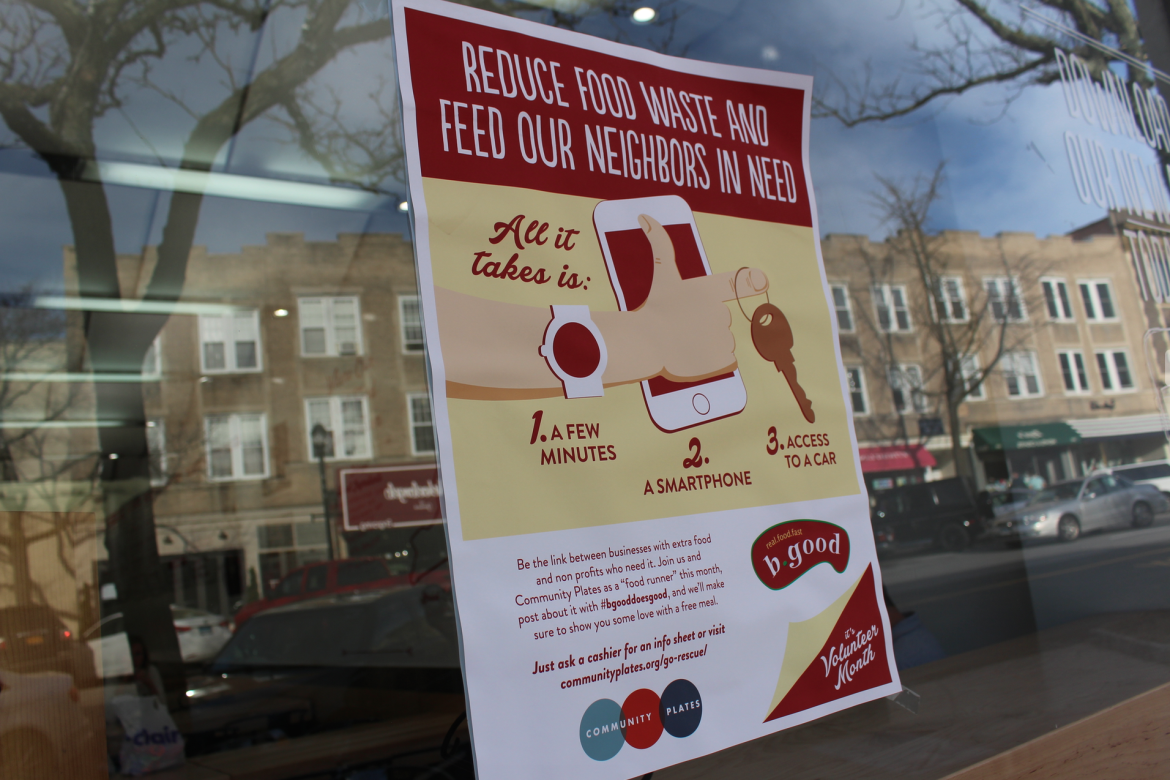 During the food run, b.good wants runners to post a photo with the #bgooddoesgood hashtag and they’ll show you some love by sending you a free meal on their app! Questions? Email [email protected]

Also in March,  Community Plates is looking for 50 new runners to join their already strong group of over 300 active food runners in the Fairfield County. 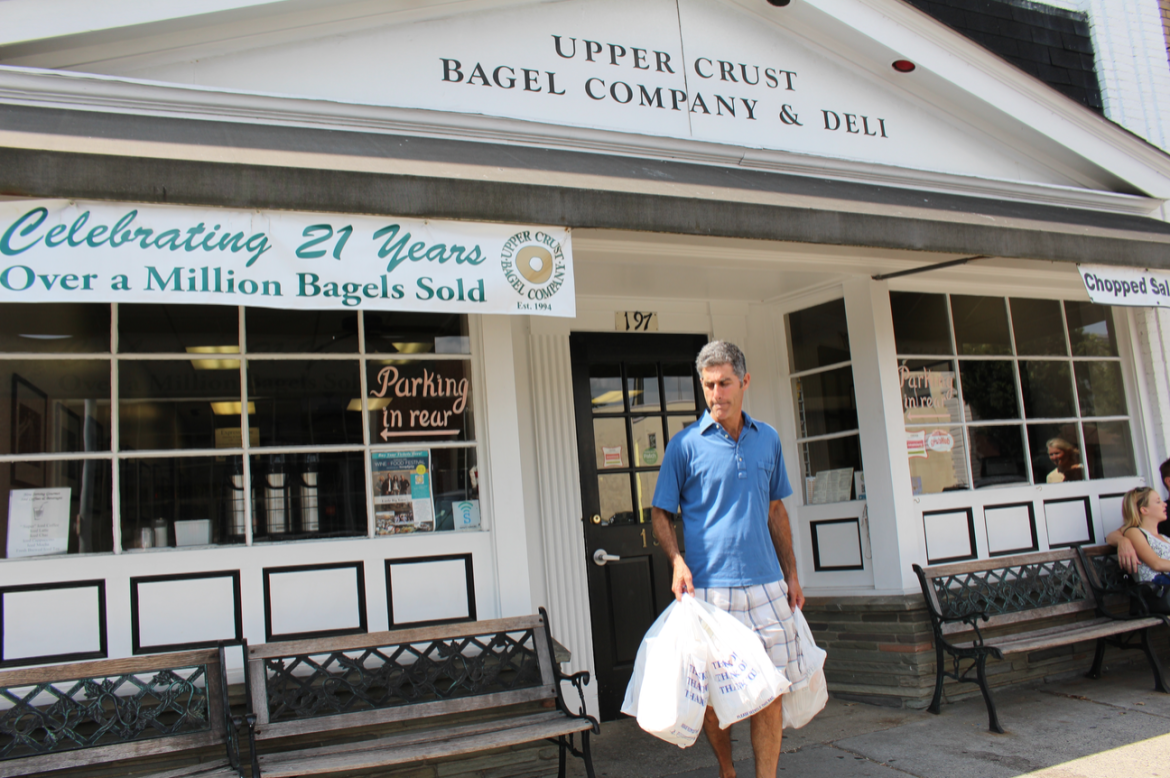 “If we could double our number of food runners this year, because of the economy of scale our platform provides, the impact for those in need would be far more than double,” said Community Plates Executive Director Kevin Mullins. “Anyone and everyone can be a part of this simple solution to ending local hunger.”

Since beginning in 2011, Community Plates Fairfield County has rescued over 8 million meals, saving 12 million pounds of food from going into landfill, at a value of over $13 million.

Over 50 million Americans are food insecure and Community Plates is fighting this with the support of its volunteers.  Volunteering for Community Plates is a convenient, effective and immediately gratifying way for individuals and food donors to support their community.

Founded in January 2011, Community Plates is committed to ending American food-insecurity through direct-transfer food rescue. Established as a 501(c)3 non-profit food-rescue platform, Community Plates is focused on transferring healthy, usable foods to where it can help feed those in need. This volunteer-driven, technology fueled process coordinates with restaurants, grocers, bakeries, caterers and other food-service organizations who have foods destined to be thrown away and delivers the food to soup-kitchens, food-pantries and other hunger relief organizations who serve food-insecure individuals and families. Community Plates currently operates in Cincinnati, OH; Columbus, OH; Albuquerque, NM; Fairfield County, CT; New Haven, CT; Hartford, CT; New Orleans, LA; with plans to open seven additional sites in 2016.