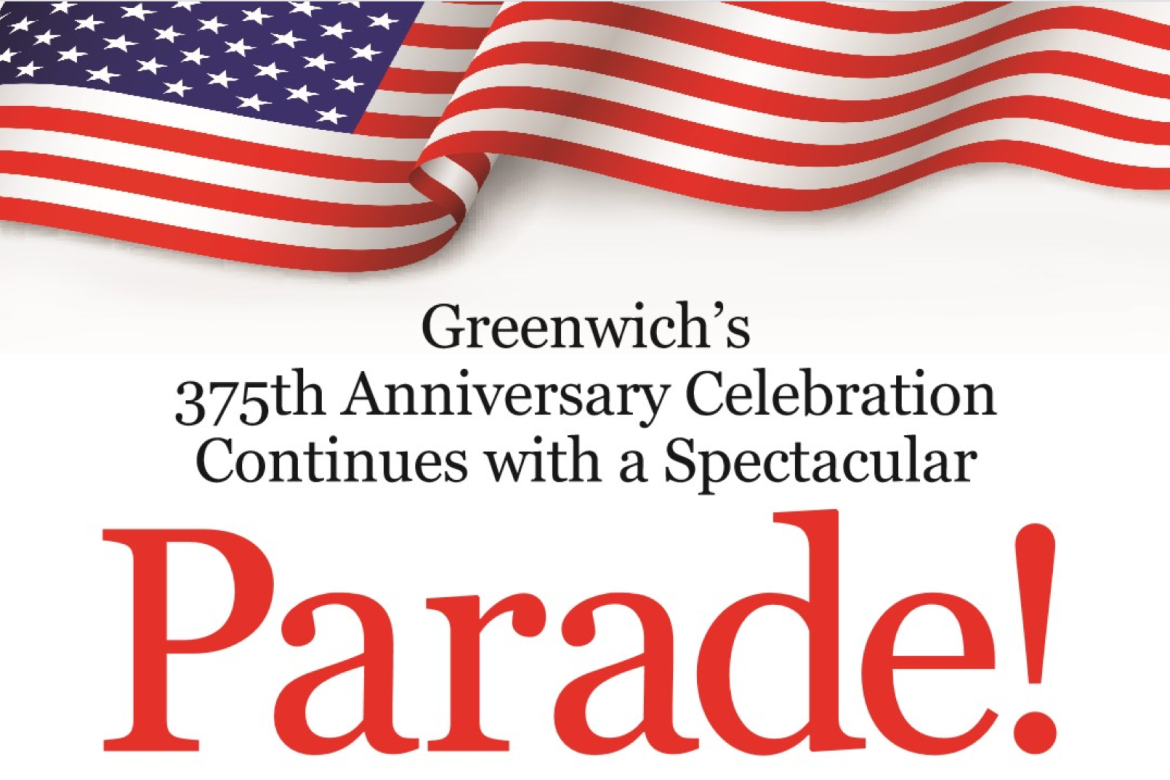 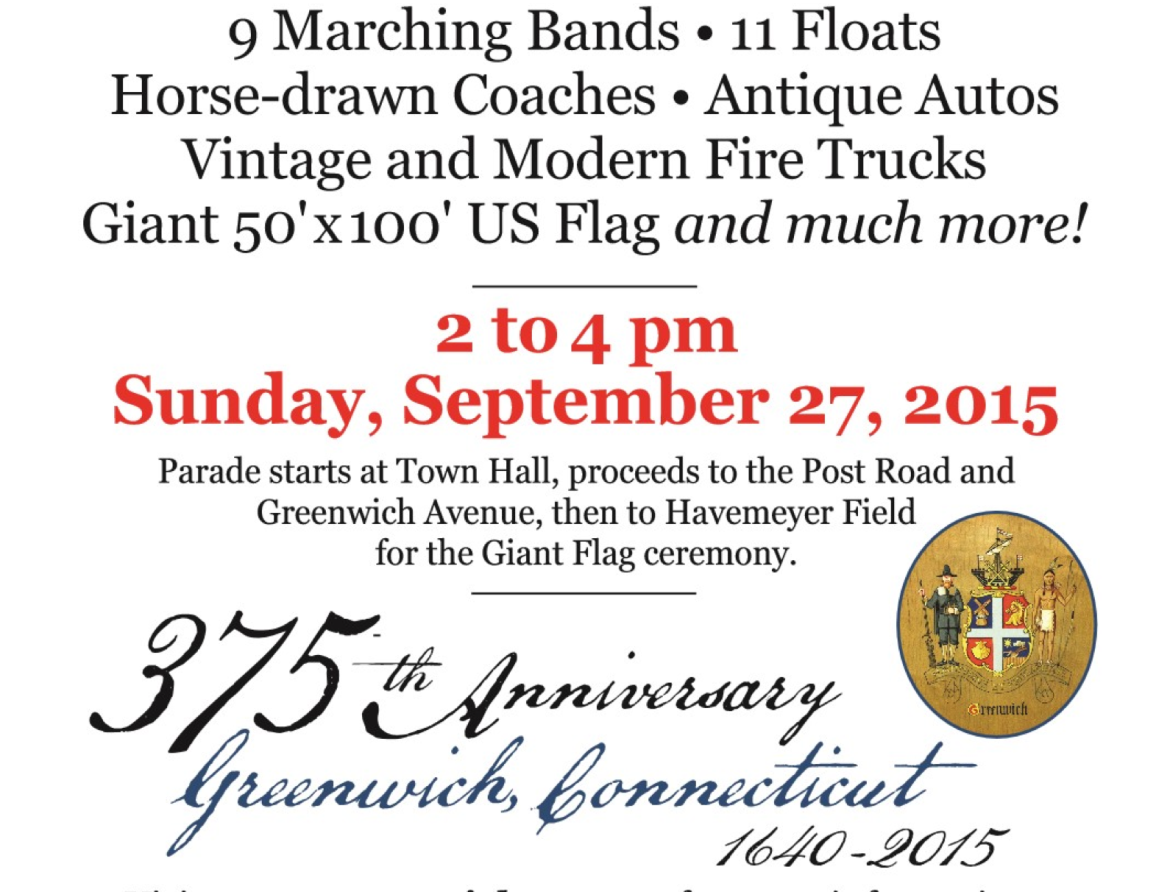 The Greenwich Police Honor Guard will lead off the Parade carrying the 375th commemorative flag, with the Town of Greenwich flag, the CT State Flag, and the U.S. of America flag.

Scouts from the Greenwich Chapter of the Boy Scouts of America will follow carrying the flags of the thirteen original colonies, while other scouts will be distributing souvenir flags to Parade spectators.

Retail stores from Byram and Glenville to Riverside, along Putnam Avenue to Old Greenwich will be displaying Parade flag posters inviting everyone to the celebration.

The Flag Committee co-chair, Dean Gamanos pointed out that this is a Parade gala that happens only every 375 years! 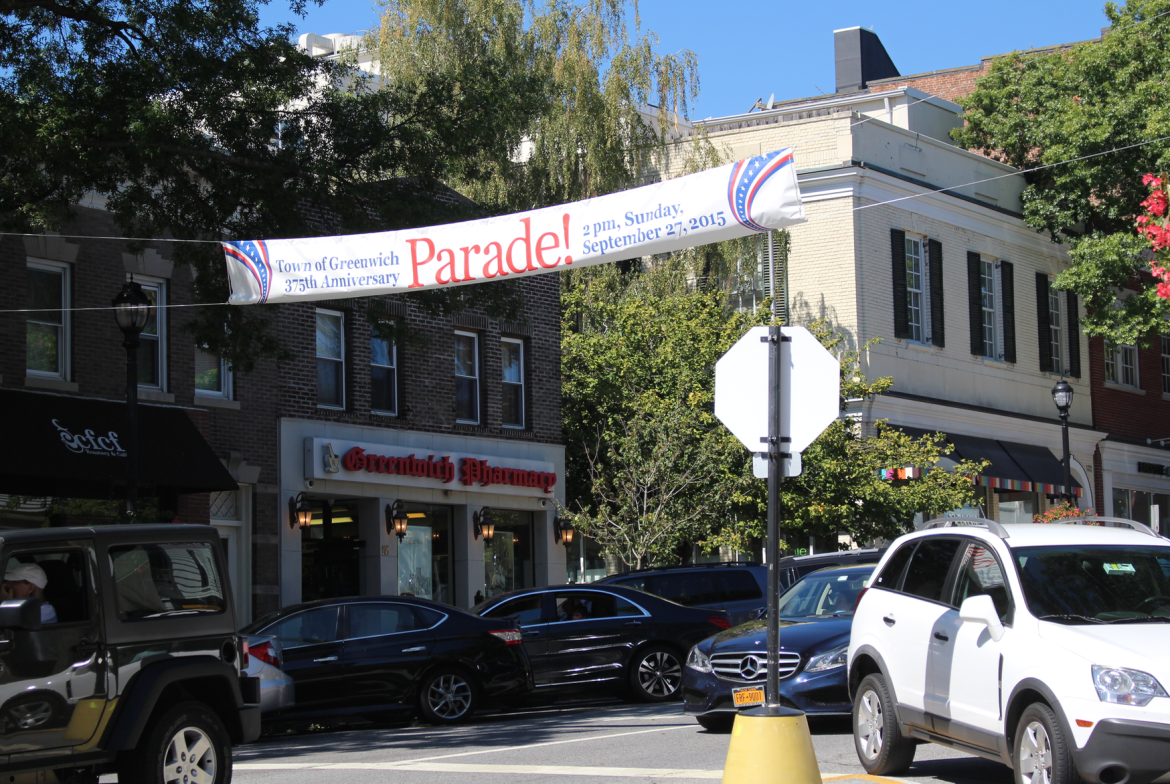 Catherine Sidor, co-chair of the 375th Flag Committee said that many volunteers have worked on so many different aspects of this Anniversary year’s events and programs.

The Greenwich 375th Anniversary Parade will be held on Sunday, September 27th beginning at 2:00 p.m.”

The September 27 Parade marchers will form up in their group’s positions with the assistance of the Greenwich Kiwanis Club’s Nick Edwards, experienced in staging many of the Town’s past parades.

Crowds of parade watchers will have excellent views of marching bands, the Second Company of the Governor’s Foot Guard dressed in their handsome red Colonial-style uniforms, floats galore, the renowned Wells Fargo stage coach drawn by its team of Clydesdale horses, vintage and modern fire engines, classic cars, the red fezzes of a contingent of Shriners, and representatives from Greenwich’s civic and nonprofit organizations.

Pat Mendelsohn, Chair of the First Congregational Church of Greenwich’s own anniversary this year, said that music director, Craig Symons, will play the keyboard on a float with singers dressed in costumes that reflect the church’s long history, singing popular and familiar tunes.

Parade Route
The 375th parade will start at Town Hall at 2:00pm and proceed to the Post Road, then east to Greenwich Avenue. The parade will move down the Avenue to the grandstands on lower Havemeyer Field for the final spectacular closing ceremony where a 50′ x 100′ flag will be unfurled at 4:00pm as the grand finale of this milestone 375th Anniversary event.

For more details, go to the 375th Anniversary’s website www.greenwich375.org and keep a lookout for the banner overhead on Greenwich Avenue!

Meet the Archivist at Greenwich Historical Society: Gatekeeper to the Past