Many more secret wonders did abound during the tour, which Davidde Strackbein, Chairman of the Greenwich Historical Society Board, launched as part of a year-long community effort to celebrate the Town of Greenwich’s 375th anniversary. 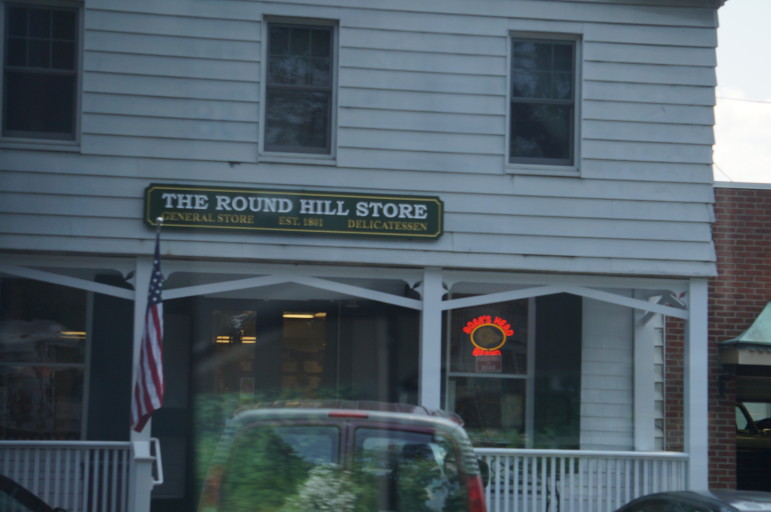 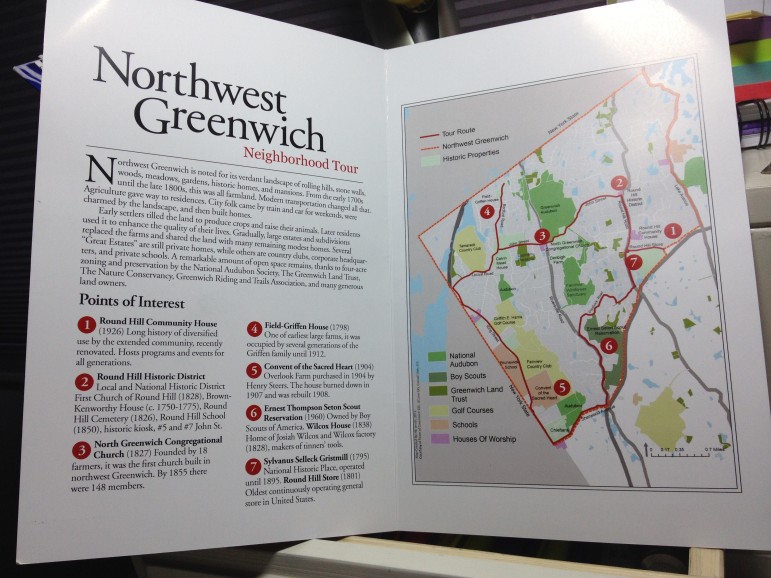 Departing from Round Hill Community House, the two-hour minibus tours were sold out long in advance. Tour leaders, who are all volunteers, mirrored the community’s enthusiasm.

Enter this reporter’s tour leader, Helen O’Malley, who has lived in Northwest Greenwich for over 40 years. Her love of research and learning (she was the Director of North Greenwich Nursery School for eight years) sparked her desire to learn more about the places on the tour. 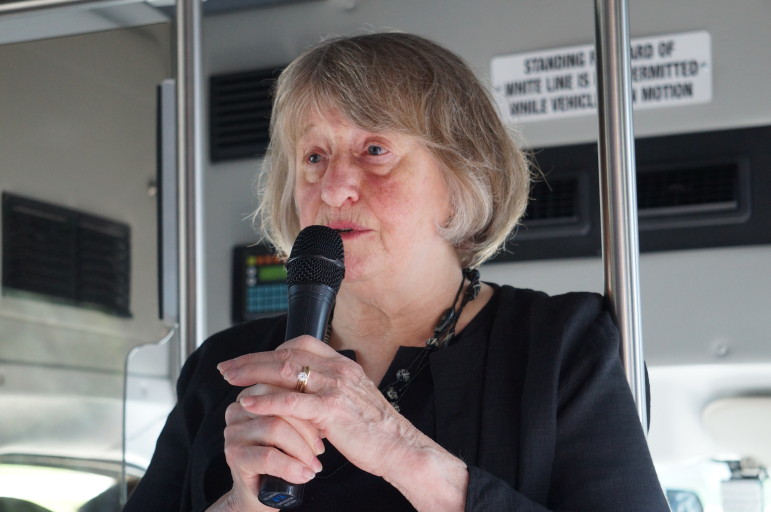 “I used to lead the Youth Fellowship, and one time in the Round Hill Community House, we did a sign for the hostages in Iran. All the kids signed it, and we sent it off to Iran. When those hostages were freed, amazingly, Kennedy came here and spoke,” said O’Malley. 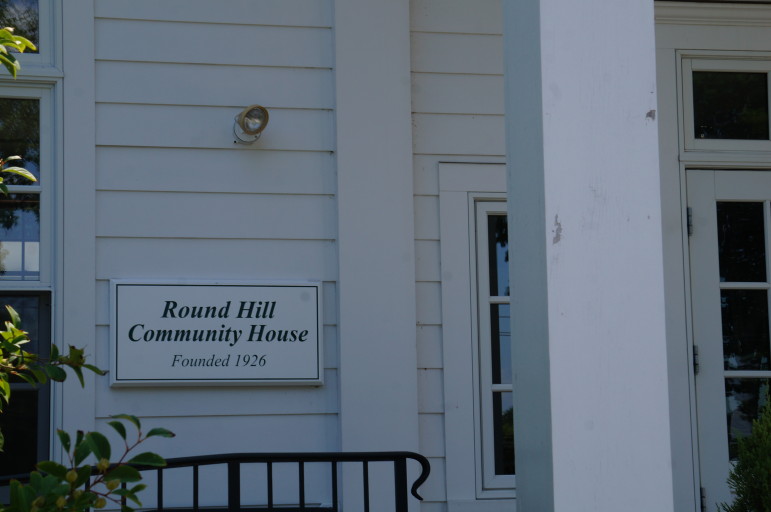 O’Malley also led the Round Hill Community Church’s first service in 1983. The service was on Christmas Eve. 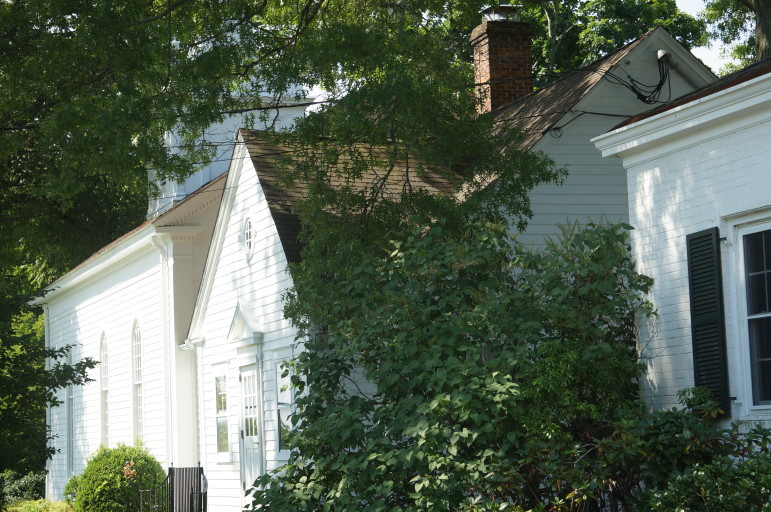 After traveling down Round Hill Road, the minibus came to a stop in front of a hill. On June 6, 1924, the Ku Klux Klan burned a 20-foot high cross here to retaliate the recent opening of an ecumenical church. 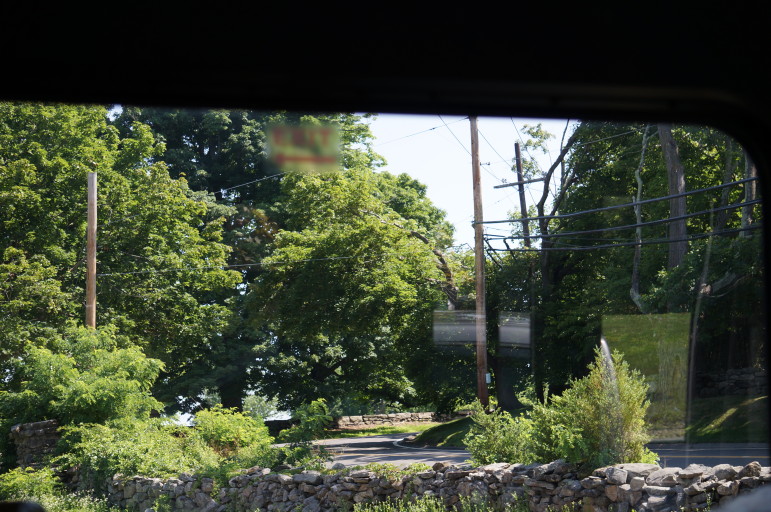 The hill on which the Ku Klux Klan burned a 20-foot high cross on June 6, 1924. Credit: Katherine Du

“One of the themes I find very interesting is that people kept seeking their own freedom: freedom of religion, freedom to do what they wanted to do. The first people to come back here were Quakers,” said O’Malley. 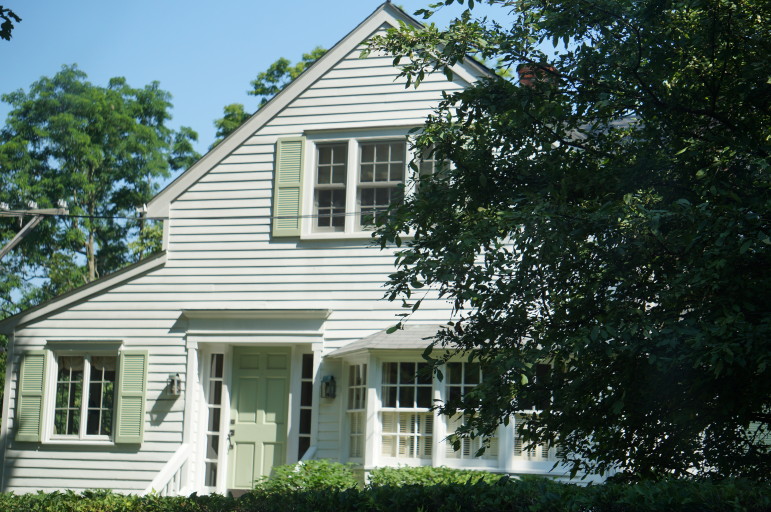 In the 1970s, a descendent of John Winthrop lived here. Credit: Katherine Du

“I was having cocktails on my porch when a helicopter lifted the Burghers of Calais from this house to take [the sculpture] to Washington,” said a passenger. 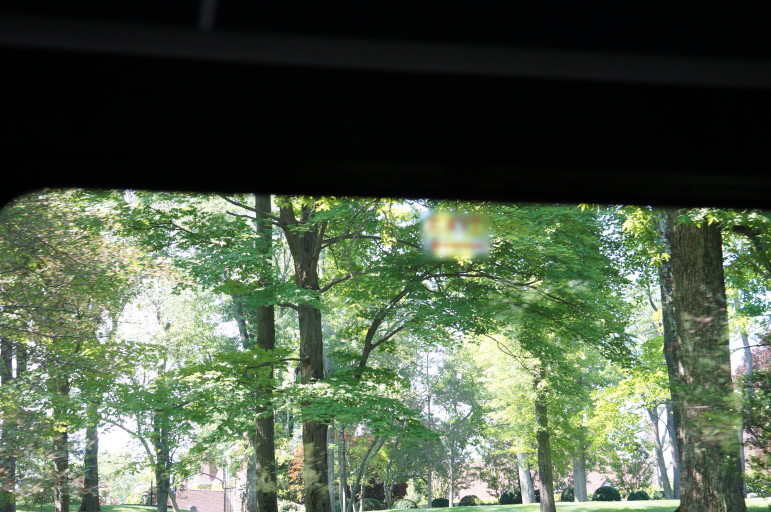 “This field has been here since the Indians were here,” said O’Malley. 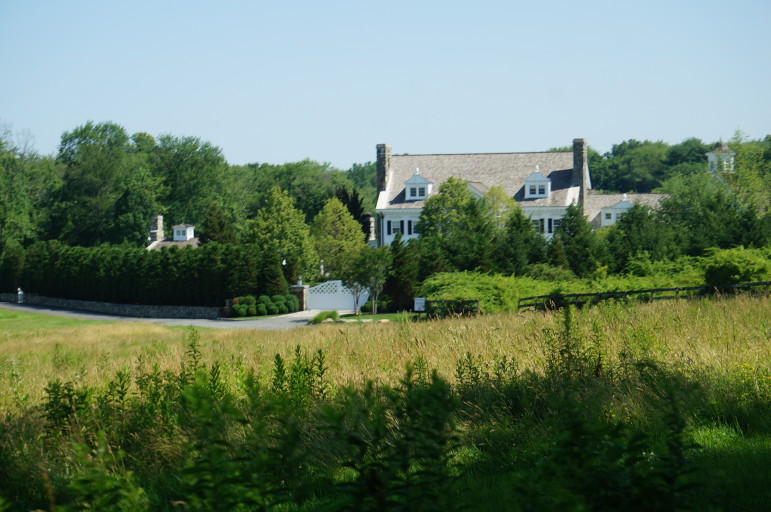 “We just passed Mrs. Moore’s house. She was a survivor of the Titanic,” said a passenger. 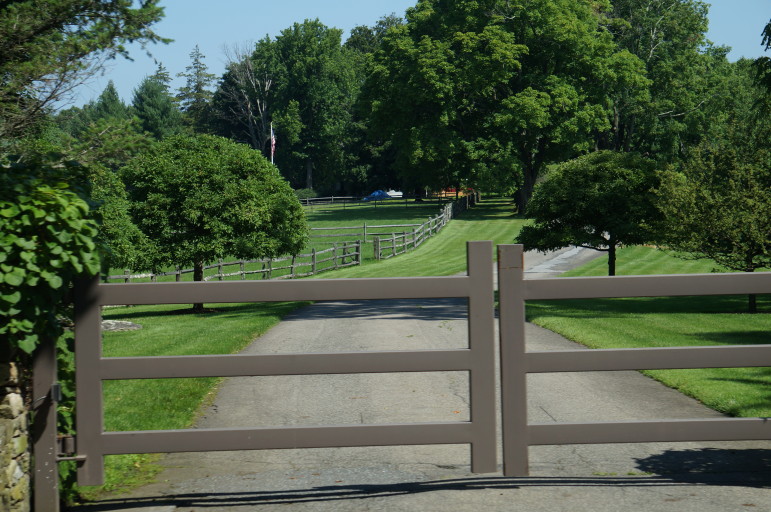 One of the many colossal orchards that once defined NW Greenwich. Farmers typically grew potatoes and apples, shipping them to New York City on packet boats. Credit: Katherine Du 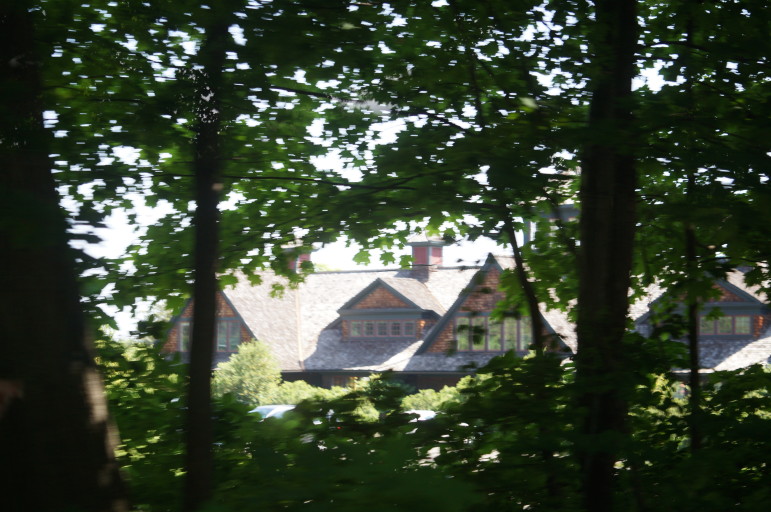 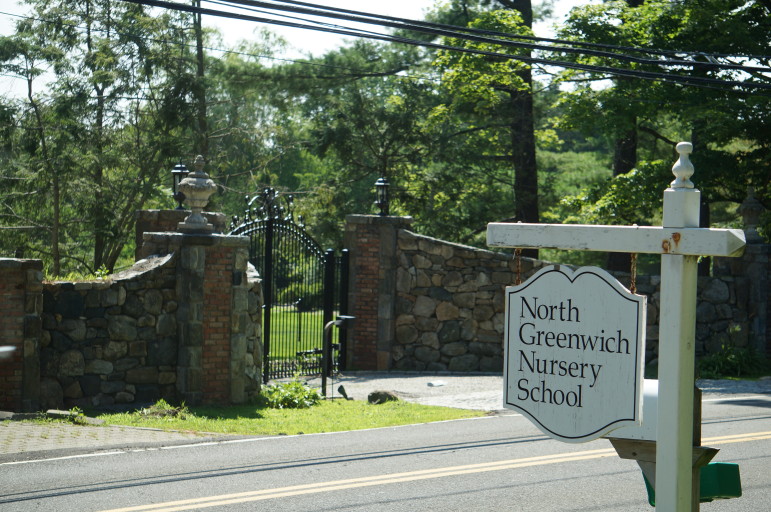 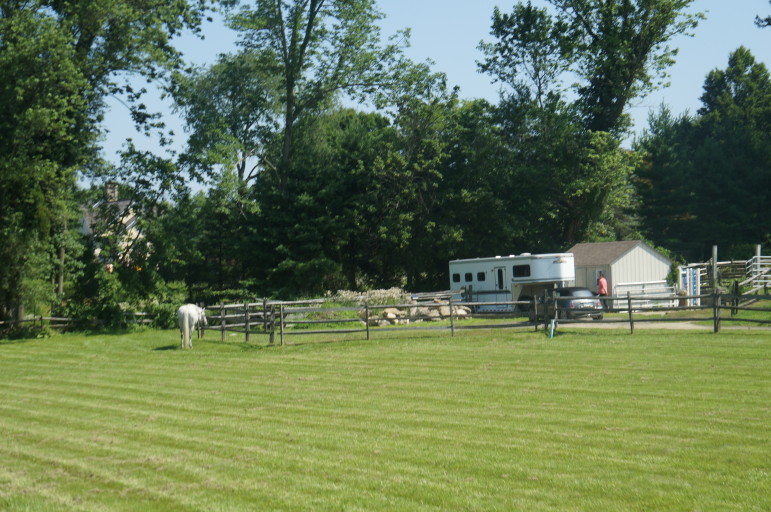 Built in 2007, this house comprises stones from China’s Yangtze River. Chinese letters are etched in the stones, which were shipped in 200 containers that each weighed 20 tons. 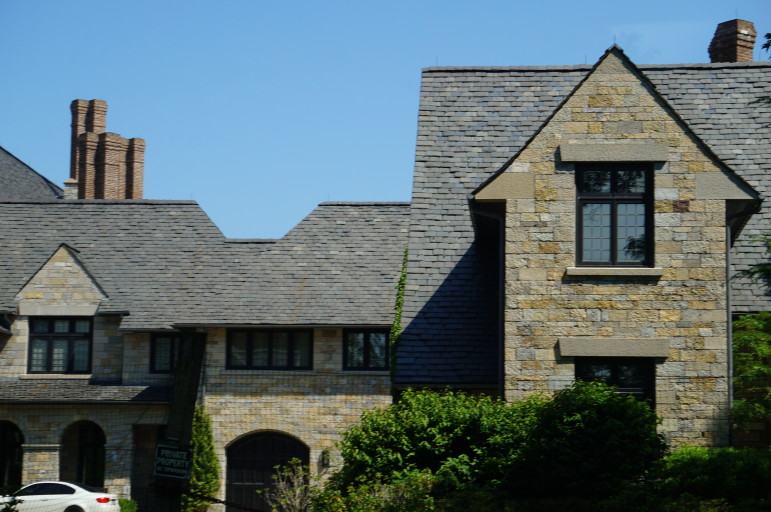 The Howes, who currently own this property, are planning to redo the un-pictured barn behind the house. “To strengthen its current state and keep it exactly the way it is,” said Genevieve Howe, a passenger on the tour. The Mead family owned the original barn. 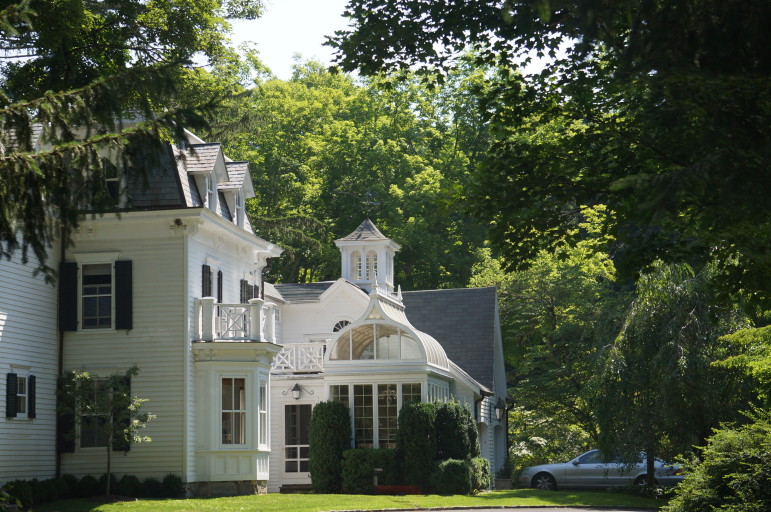 Passengers stretched their limbs at the 33-acre Field-Griffen House, one of the oldest estates in Greenwich. Quakers farmed on its grounds for several generations. 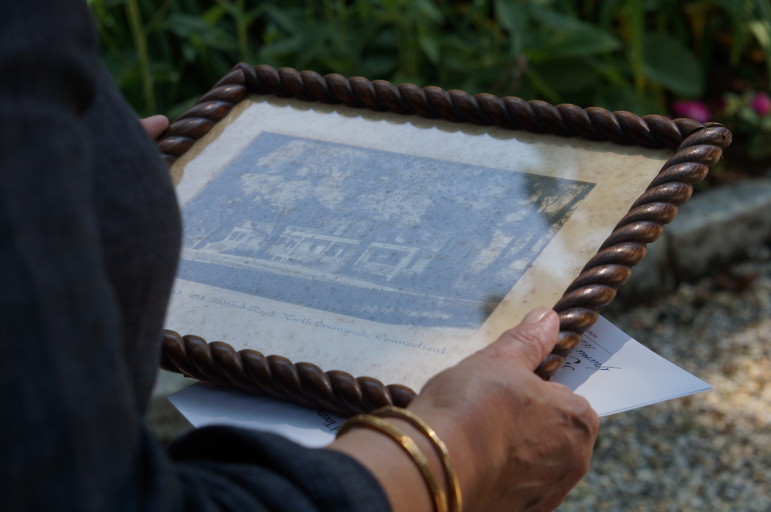 A photograph of the original Griffen House. Credit: Katherine Du

“The original house was built in 1734. It’s the Griffen House. The Griffens owned the house from 1734 to 1912, when it was purchased by Sterling. Sterling had bought 1,400 acres in back country Greenwich and parts of New York because a railroad was going to be put in down the street. The railroad never went in, and Sterling wound up donating the land to Yale University,” said Sean Murphy, the current owner of the Field-Griffen House. 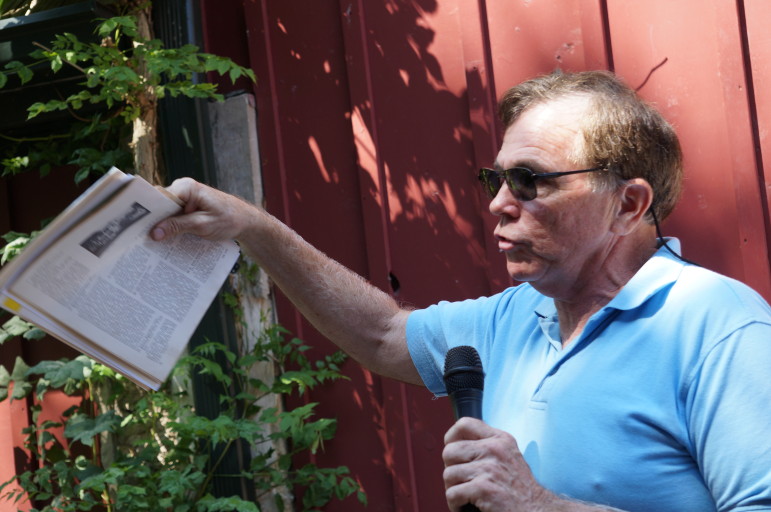 “When I purchased the property, the barn had fallen, but the foundation was still here, so I built new structures made out of the old lumber on top,” said Sean Murphy, who co-founded Murphy Brothers Contracting with brother Christopher Murphy. 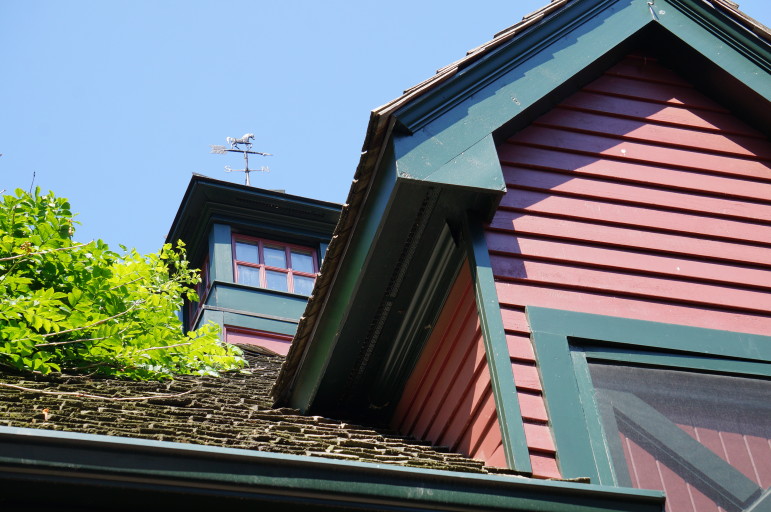 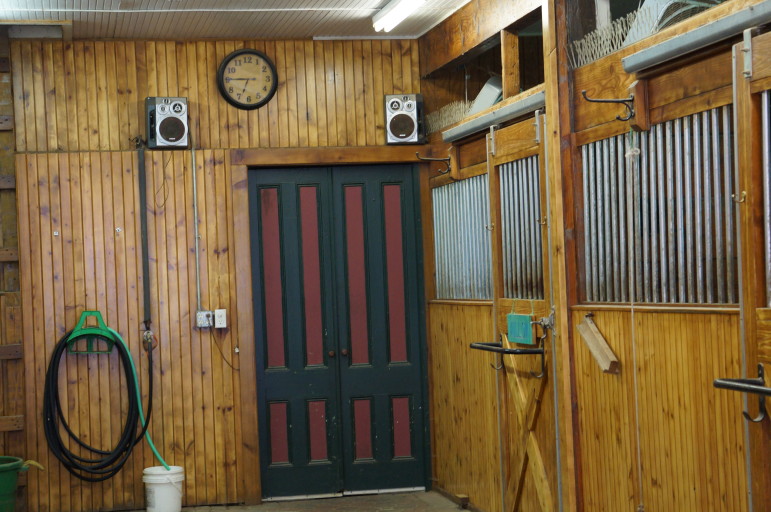 “Years ago, people rode horses just to ride, just to visit their friends. The Greenwich Riding Trails Association is a part of that now… The connections they have made not only with their animals, but also with the other people in town are pretty amazing,” said Rosary Murphy, Sean Murphy’s wife. 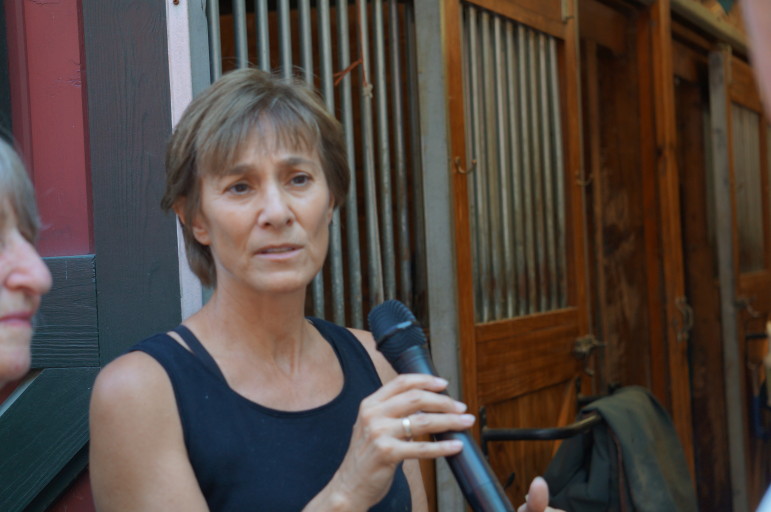 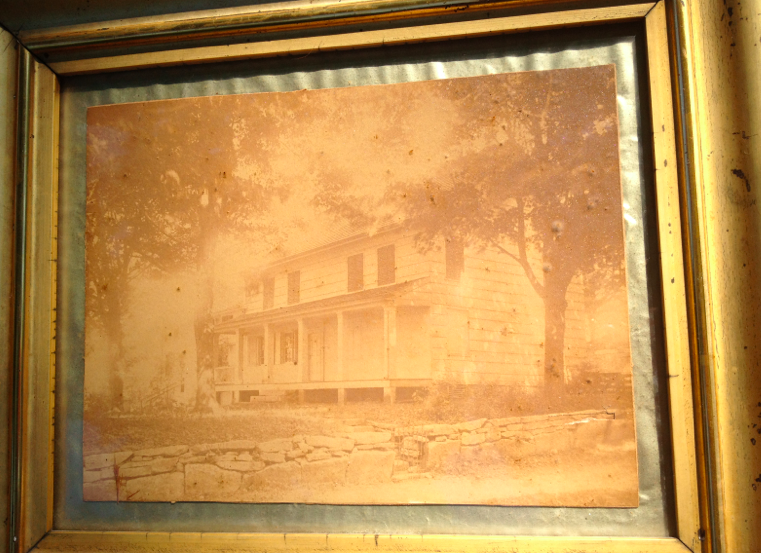 A photograph of the original Griffen House. Credit: Katherine Du

“I try to keep the house as original as possible. The main house has 34-inch hand-split shingles on two sides. Some of the interior of the house still has some of the original mutton horse’s hair plaster. The first floor has the original windows with the wavy glass,” said Sean Murphy. 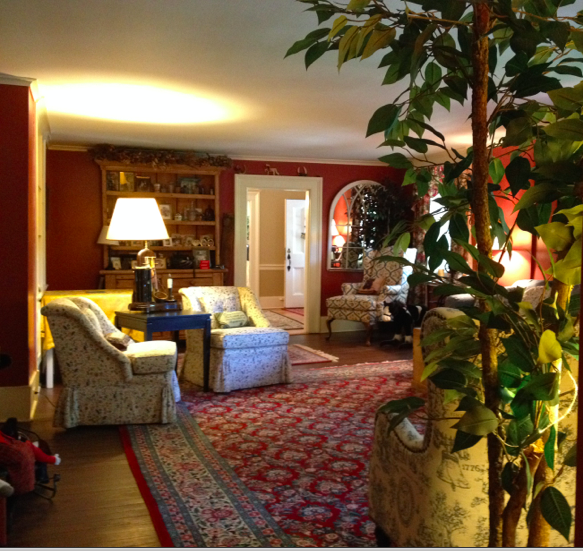 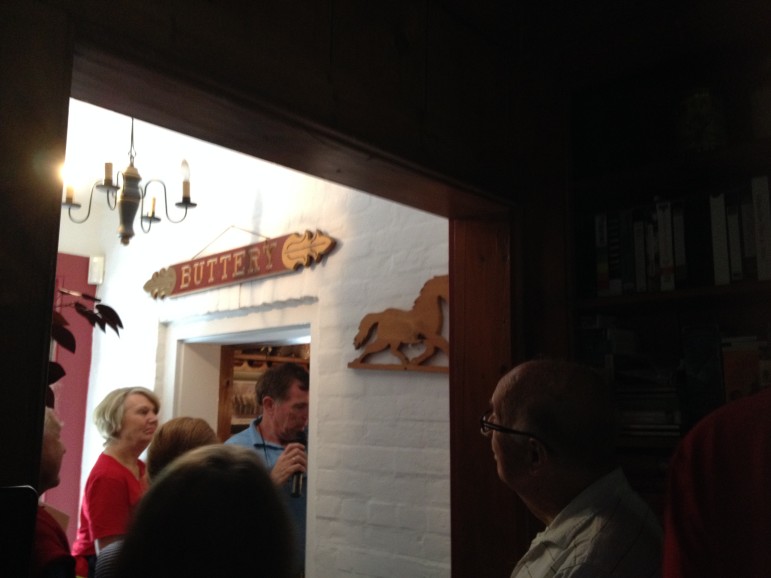 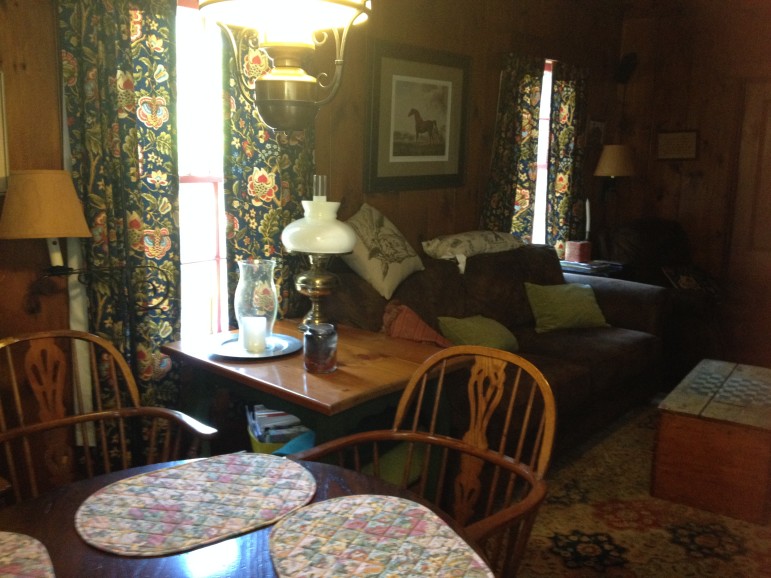 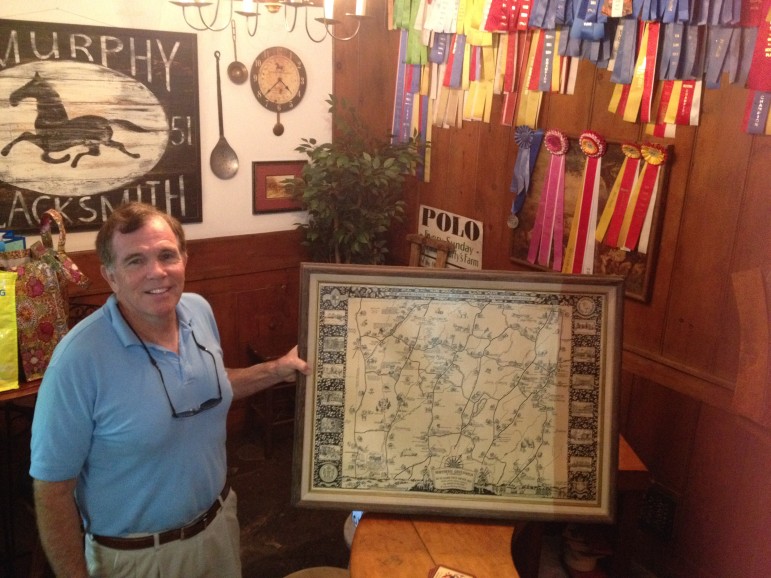 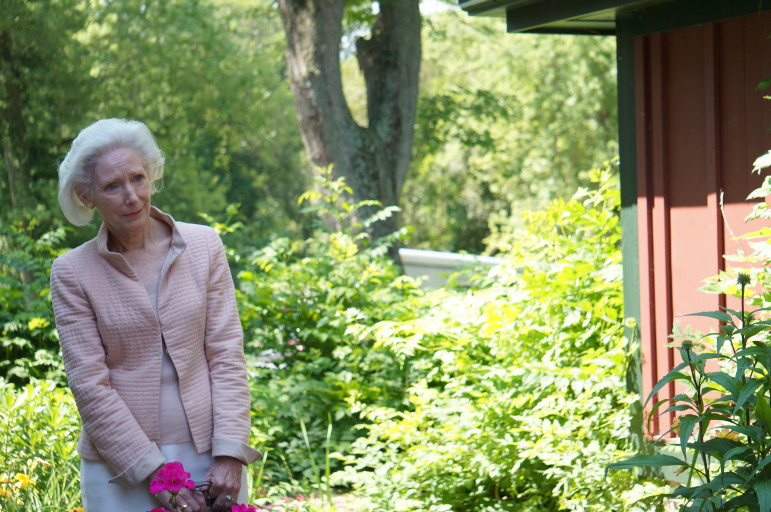 Davidde Strackbein, Chairman of the Greenwich Historical Society Board, at the Field-Griffen House. Credit: Katherine Du

“I used to walk a great deal. When I walked, it was beautiful in the fall. Leaves would turn yellow, and this whole Bedford Road was like the Yellow Brick Road,” said O’Malley. 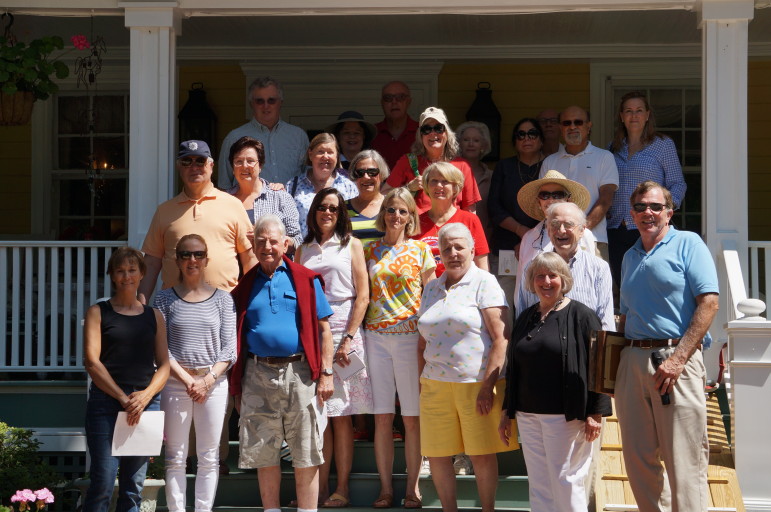 A few stops away, Brunswick School, which almost became a Xerox site, recently raised 100 million dollars to fund an olympic-sized natatorium with geothermal heating. O’Malley mentioned Joan Warburg’s old saying: “If you have the means, you have the responsibility to use them well.” 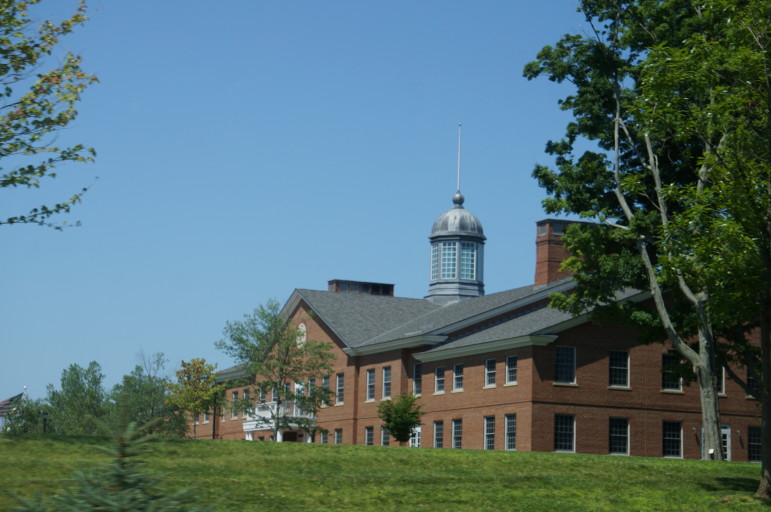 A scenic stop ensued at the Ernest Thompson Seton Scout Reservation, owned by Boy Scouts of America. Strackbein relayed that the Greenwich Boy Scouts Chapter is the only independent Boy Scouts chapter in the United States. 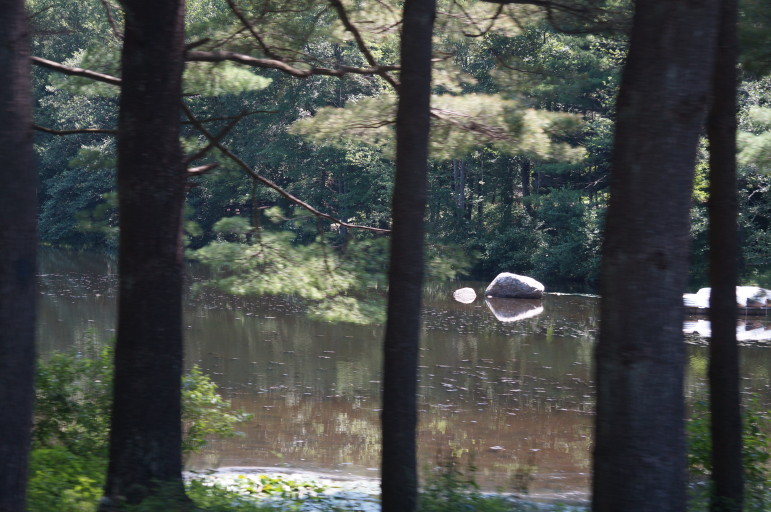 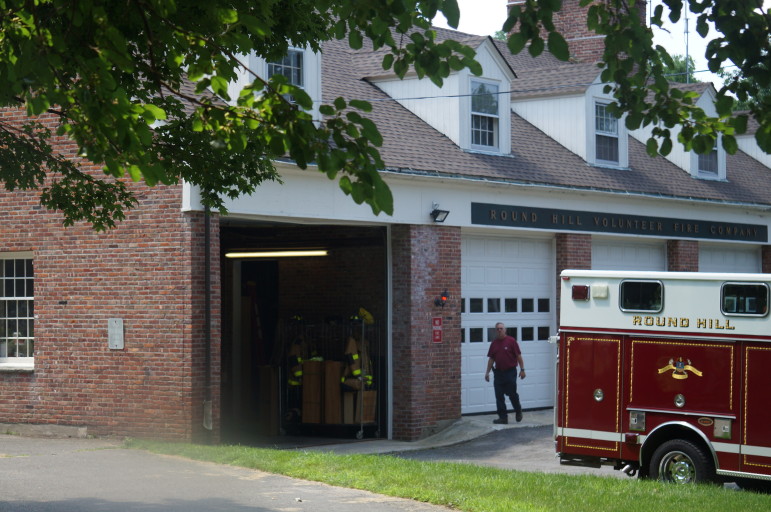