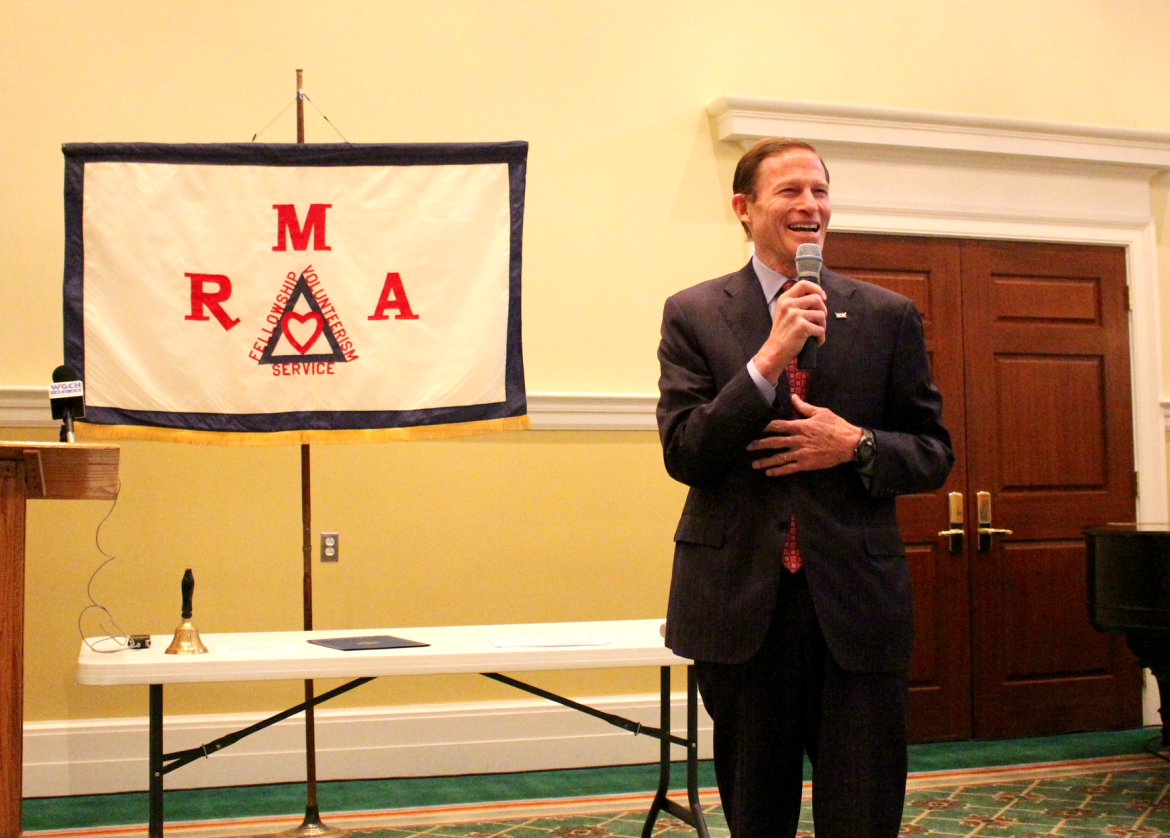 The Retired Men’s Association welcomed US Senator Richard Blumenthal (D-CT) to their speaker series on Wednesday morning with a standing room only crowd.

Senator Blumenthal, who lives lives in Greenwich, acknowledged his father-in-law Peter Malkin in the audience.

From there, Blumenthal touched on more serious topics, and fielded questions from RMA members ranging from the US agreement with Iran on missiles (It’s an agreement, not a treaty) to dumping dredge material from Greenwich Harbors into Long Island Sound (Any dumping of dredge should be far enough out so it doesn’t contribute to pollution).

War Against ISIS
“I was horrified and heartbroken by the tragic, brutal, inhumane attack in Brussels,” Blumenthal said, adding that military efforts must be re-doubled against terrorists.

“We’re at war against ISIS who have taken responsibility for the attacks. And we must make sure the war is fought in the Middle East,” he said, adding that ideally the US will utilize its air superiority, special operators who equip and train allies, and ability to intercept of enemy intelligence. He said Russia has as much to lose from ISIS growing in strength as the US. “They are playing a very dangerous game by putting the main burden of fighting ISIS on us,” he said.

Blumenthal said toward the end of defeating ISIS, the US must invest in its military.  Specifically he said submarines, made in Connecticut, can launch missiles and put special operators in places otherwise impossible. Submarines can also conduct surveillance and gather intelligence. “They are the most stealthy, invisible way to project power to other parts of the world,” he said, adding that the US has 48 submarines. He advocated building two new submarines per year. “They can do things you wouldn’t imagine,” he said. 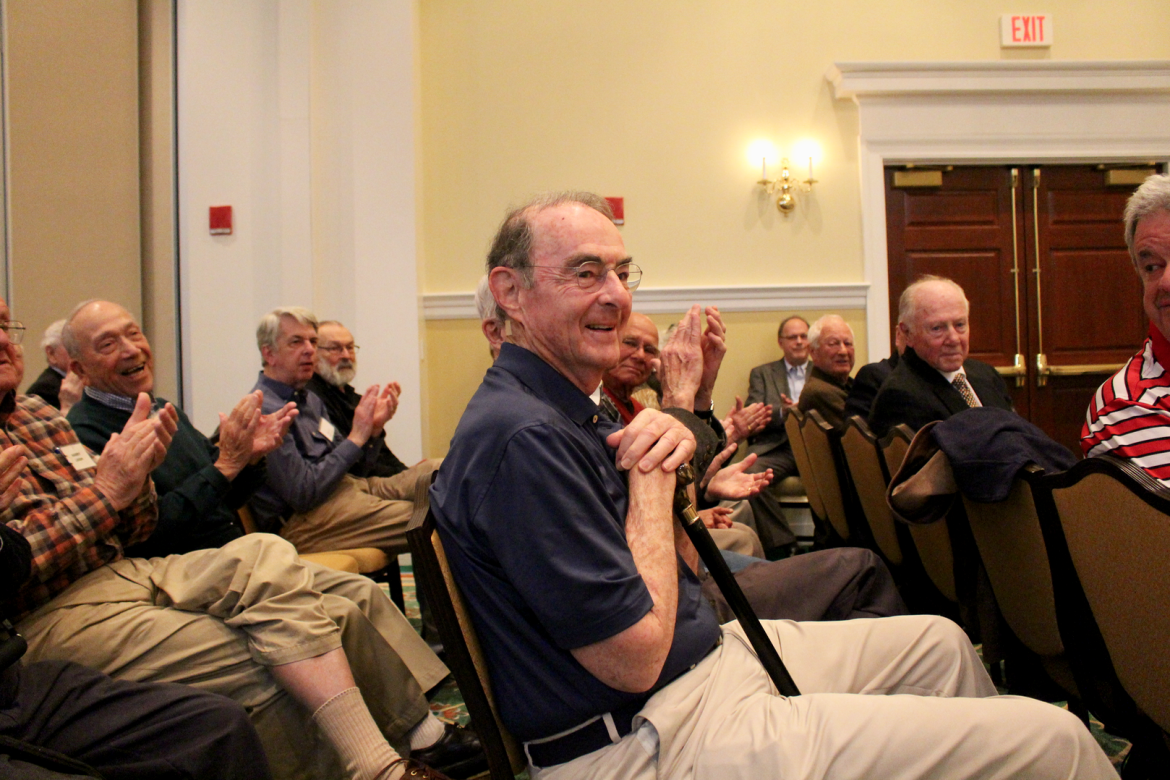 “It’s a job creator, but it’s also essential to move jobs and people,” he said. “We can’t be a 21st century economy when we are relying on bridges built at the turn of the century. The Walk bridge in Norwalk was built when Grover Cleveland was President.”

Blumenthal advocated a public-private partnership to create an “Infrastructure Bank,” which he said his Republican colleagues call “a public financing authority.” 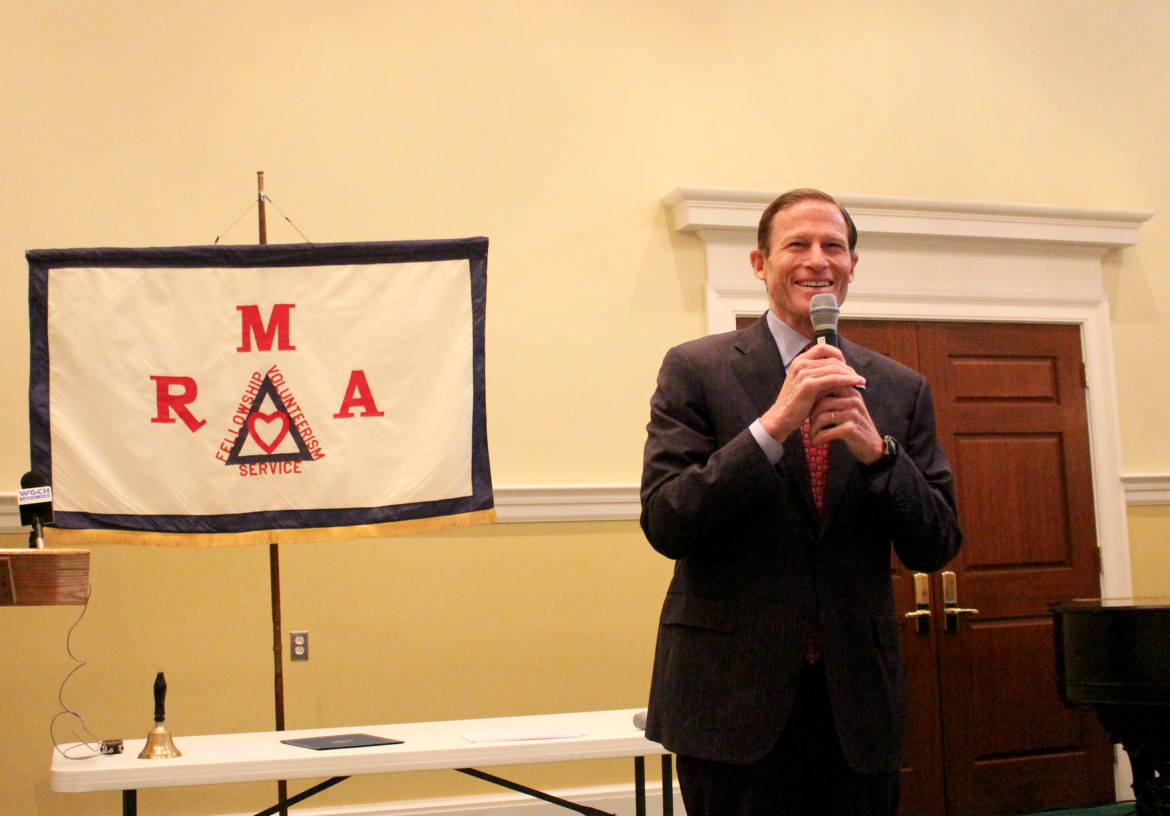 Education and College Debt
Blumenthal, who still has a child in college, said that in the US, the collective college debt totals $1.2 trillion, desribing it as the largest debt, with the exception home loans. He said the average college debt is in the range of $60,000-$100,000.

“They can’t start a business, can’t start a family, can’t buy a home. …It drags down the whole economy and prevents young people from becoming entrepreneurs and taking risks,” he said, adding that college loans are one of the few that cannot be discharged or re-financed.

Washington Gridlock, Supreme Court Vacancy
Blumenthal expressed frustration at the refusal of Republicans to consider President Obama’s nominee for Supreme Court. “Not a hearing. Not a vote. Unprecedented,” he said.

“Just yesterday there was decision with a 4-4 tie,” Blumenthal said, referring to real life consequences for people because of the vacancy.

“If there is anything that disillusions people and dismays them is that we are not getting things done,” he said.  “We need to be more bi-partisan and reach across the aisle. The Senate should do its job.”