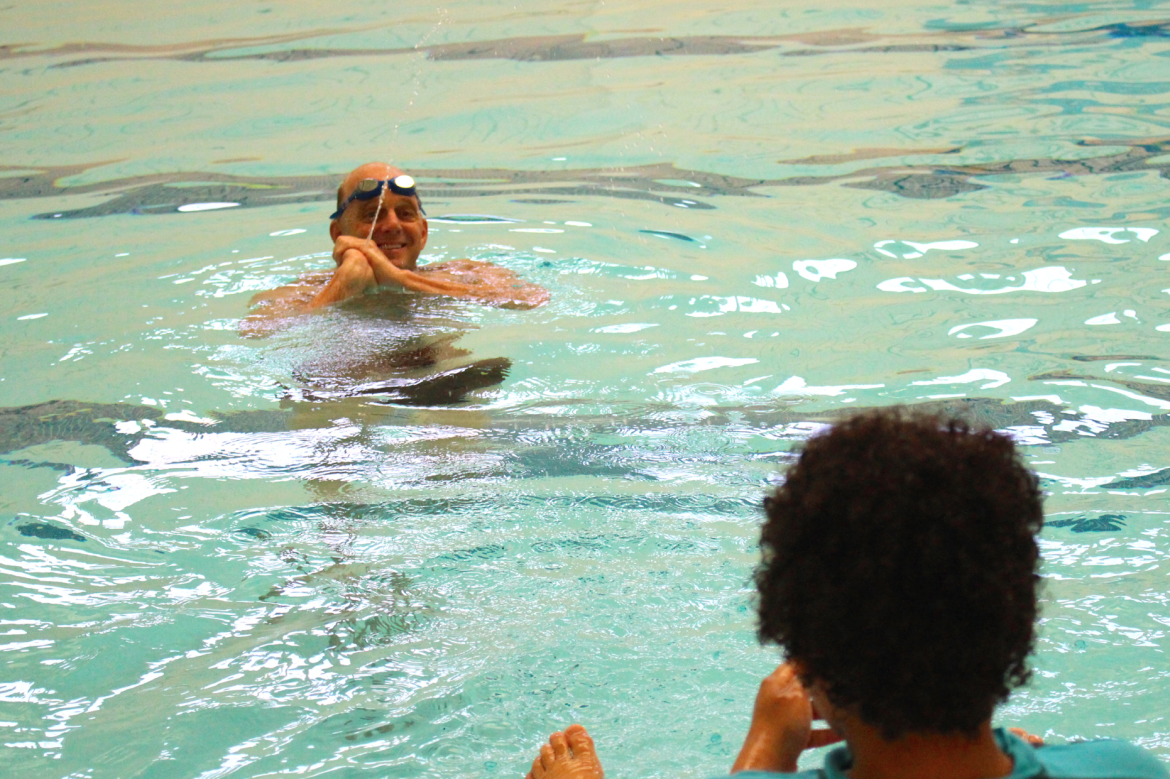 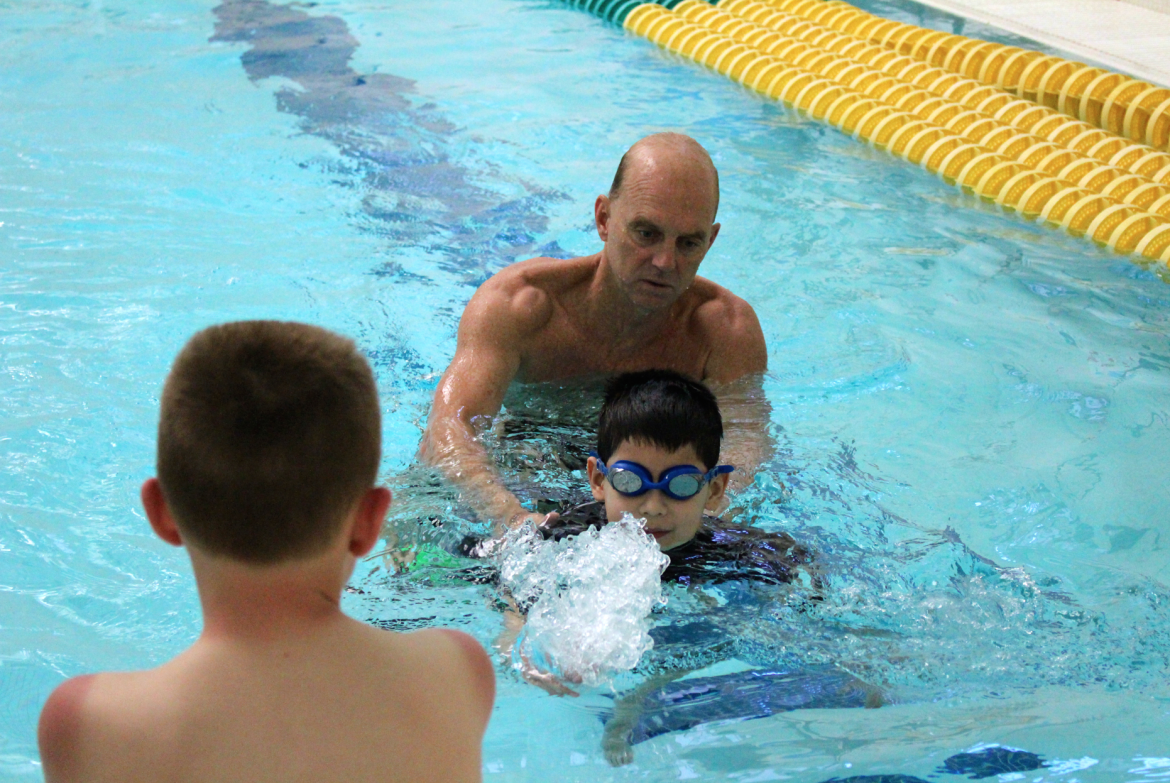 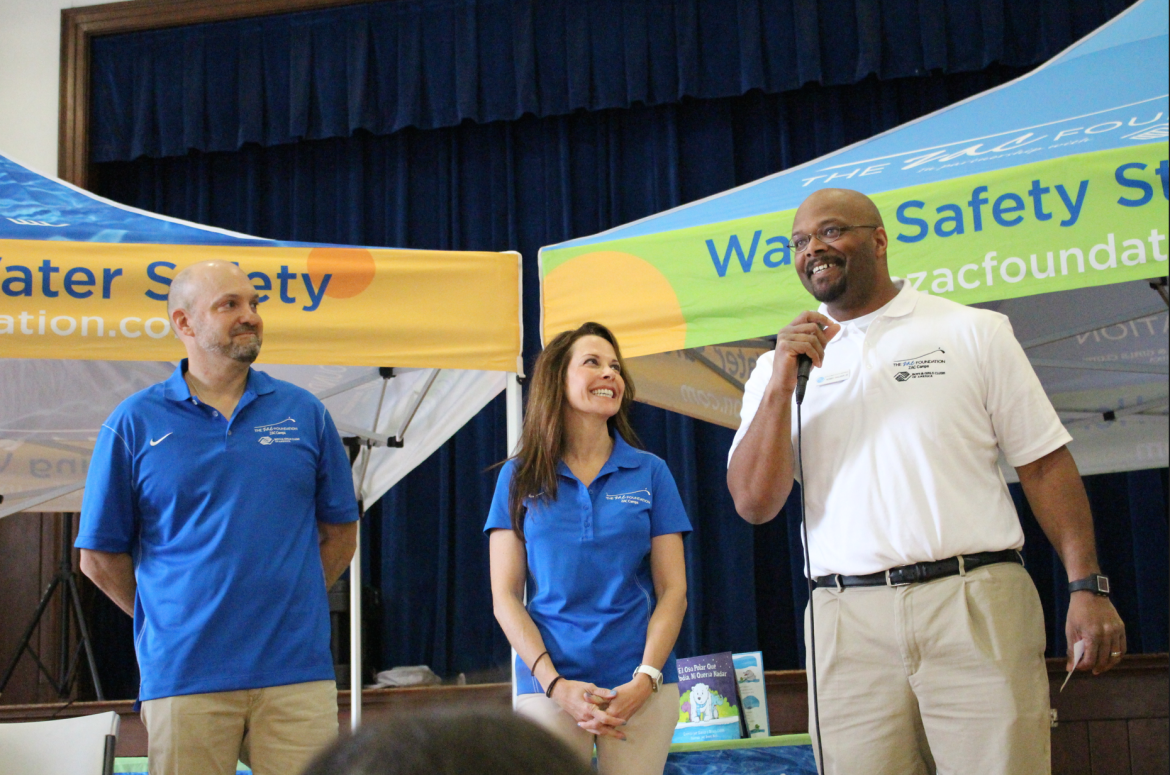 “Who ever said Mondays were boring?” asked Boys & Girls Club of Greenwich CEO Bobby Walker at 9:00am on the first day of ZAC Camp.

About 117 water safety campers had just been dancing around the game room to the Happy song and were still smiling.

The Boys & Girls Club of Greenwich was selected by The ZAC Foundation has to host ZAC Camp for the fifth year. The camp is named in honor of Brian and Karen Cohns’ six-year-old son Zachary who drowned in 2008 in the family’s swimming pool when he became entrapped in the suction of a swimming pool drain. 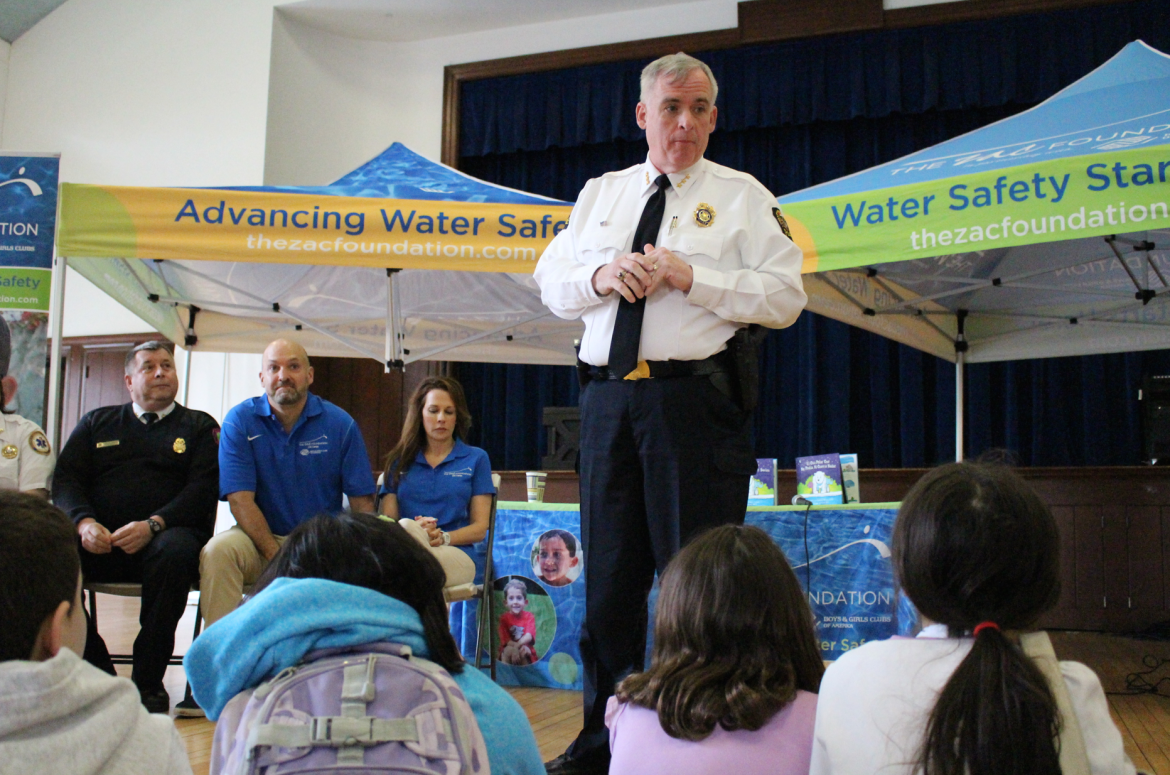 Greenwich Police Chief Jim Heavey said he learned to swim at the Boys & Girls Club when he was a boy. Credit: Leslie Yager

“Every time I come down to the Boys & Girls Club I get all kinds of memories, from when I was the same age as you and I was coming into this building for the very first time, putting my bathing suit on, and going into that same pool you’re going into,” Chief Heavey said.

“I was a little scared,’ absolutely,” Chief Heavey admitted. “I want to challenge you guys. There’s a lot of staff there to make sure it’s really safe. Be brave and challenge yourselves to do things you haven’t done before.”

Chief Heavey said at the end of the week, when the children get their medals, they will be a lot safer and have a skill they can take with them their entire lives. 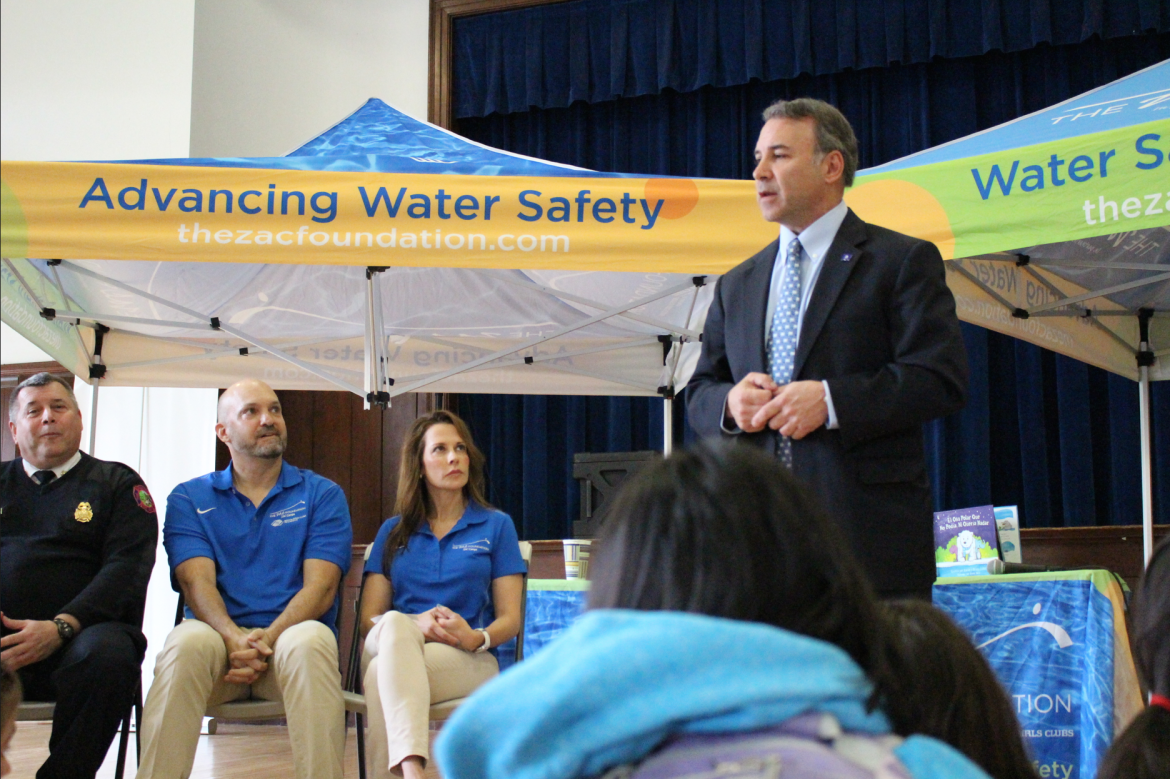 State Rep Fred Camillo (R-151) said he also learned to swim at the Boys & Girls Club when he was a boy, but had been terrified to touch bottom. He told the children that he would go on to become a lifeguard. Credit: Leslie Yager 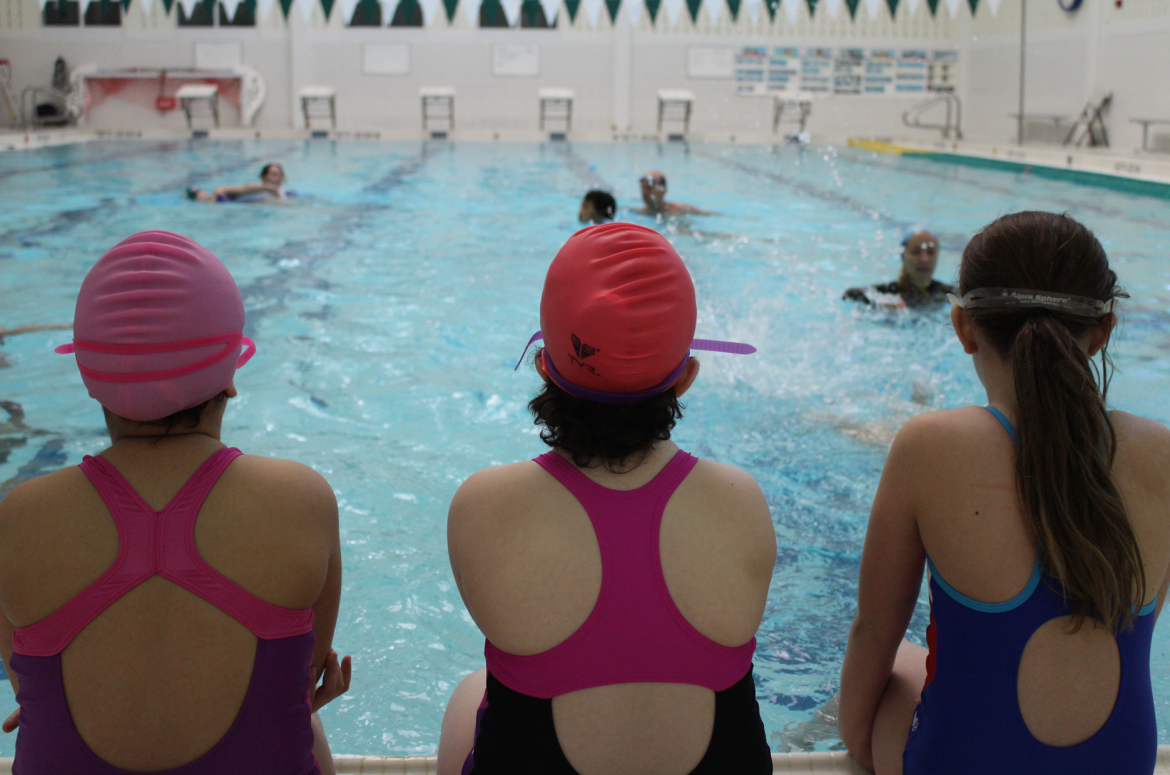 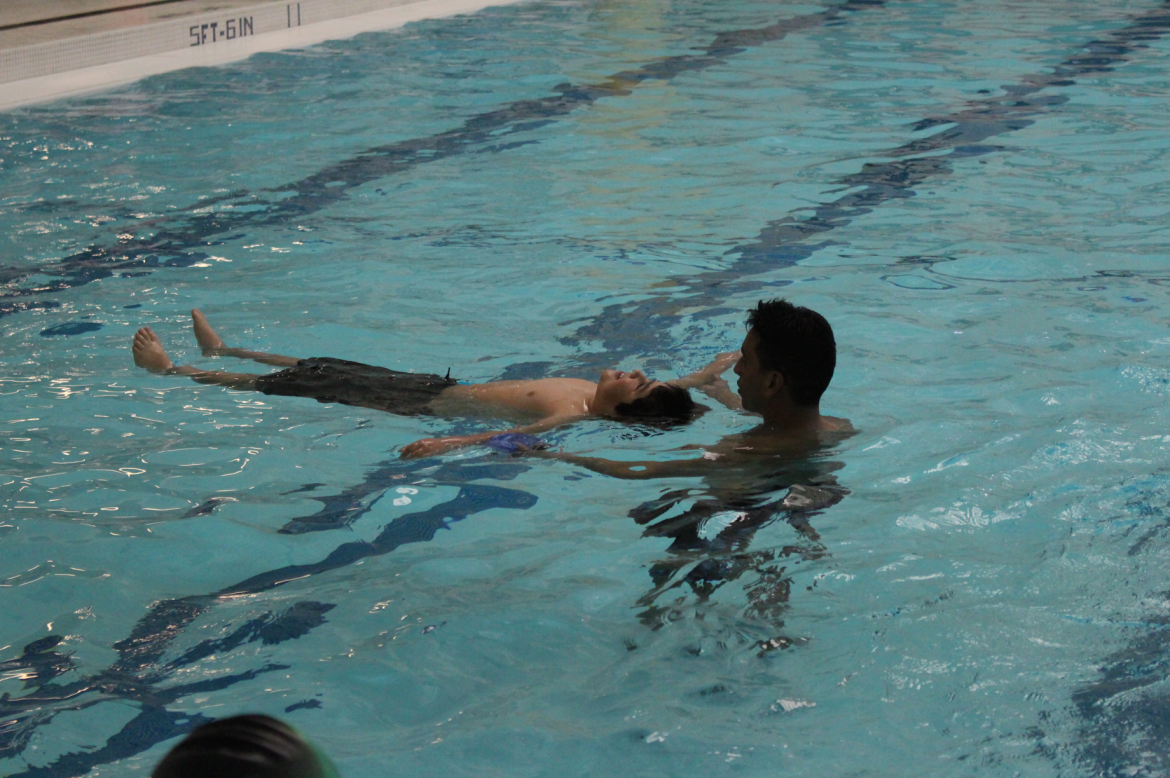 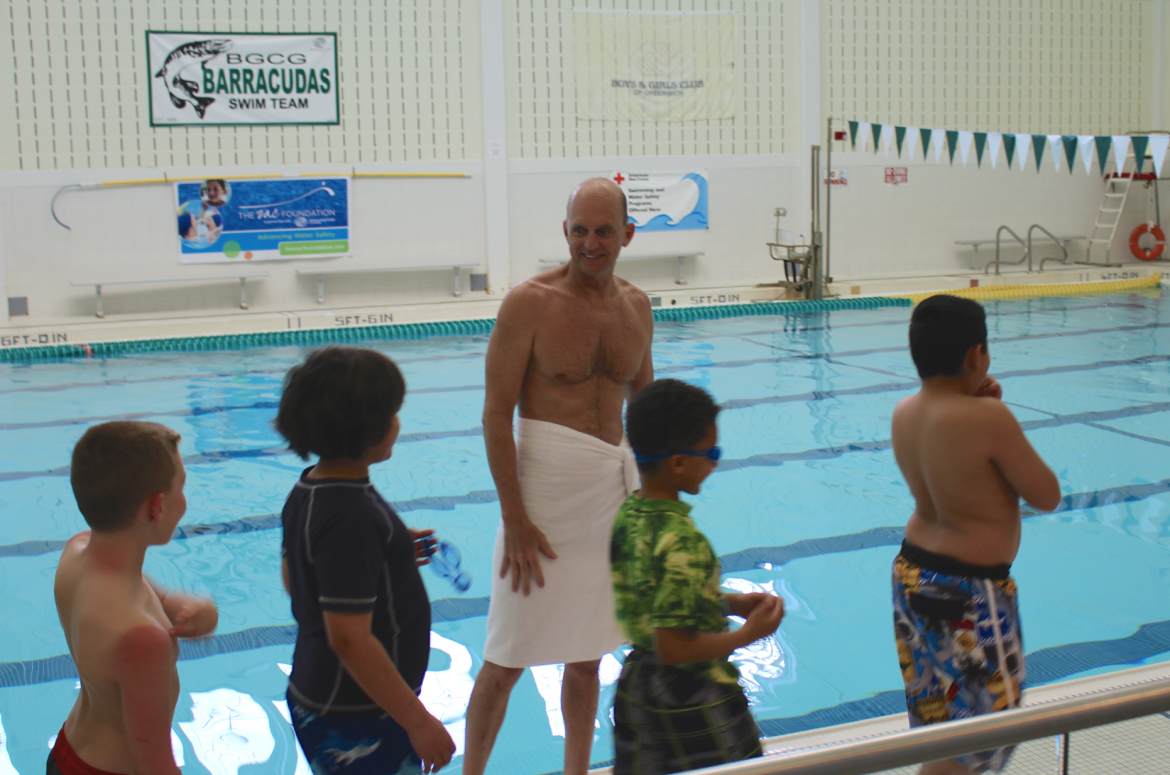 State Rep Fred Camillo (R-Dist 151) said he too learned to swim at the Boys & Girls Club. “I was afraid to touch bottom,” Mr. Camillo said. “But I had to stick with it. My uncle worked here to make sure I stuck with it. Eventually I conquered it, and a few years later, I was actually lifeguarding at a pool.”

Rowdy Gaines, a three-time gold medalist for swimming in the Olympics introduced himself to the children. He said he didn’t start swimming until he was 17 and a junior in high school. 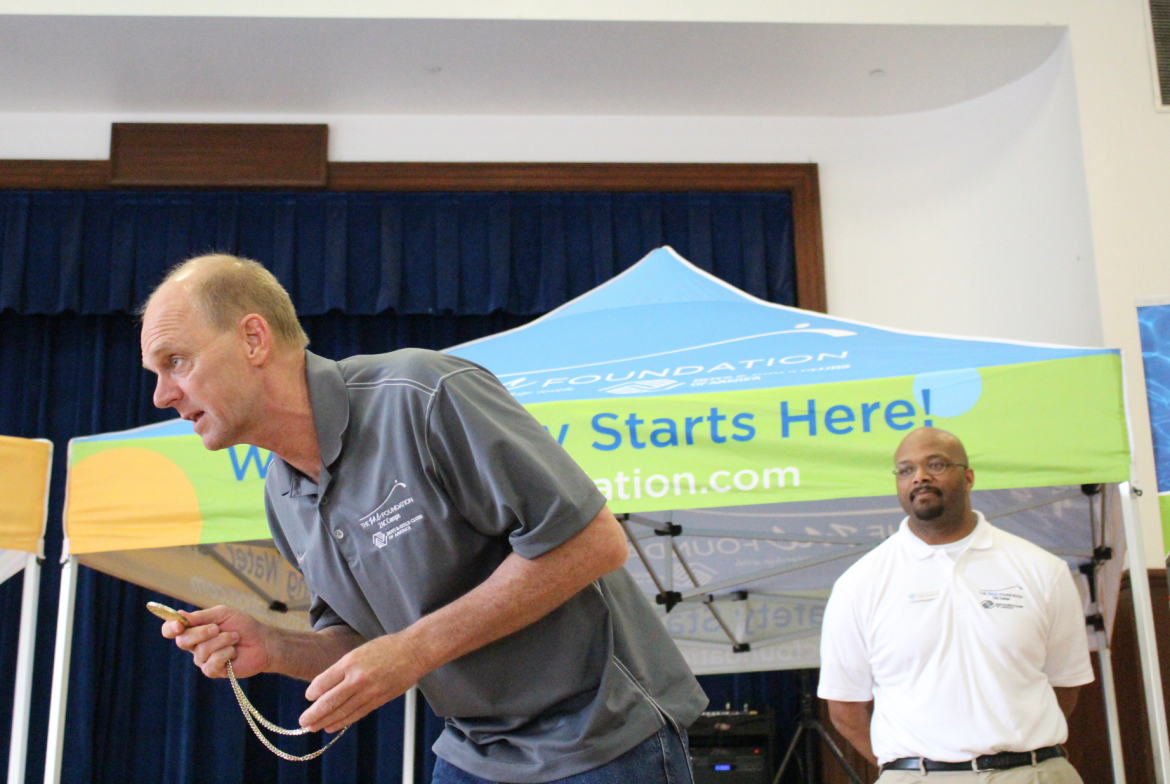 Rowdy Gaines shared one of his gold medals with all 117 children at ZAC Camp at the Boys & Girls Club of Greenwich. Credit: Leslie Yager

“So don’t ever let anyone tell you it’s too late to learn to swim. It’s never too late to learn how to swim. If you don’t know how to swim, don’t be embarrassed,” said Gaines who brought one of his gold medals with him and passed it around for each child to see and touch. “Everyone tells me that when they touch the medal, it brings them good luck. That’s the legend,” he said. 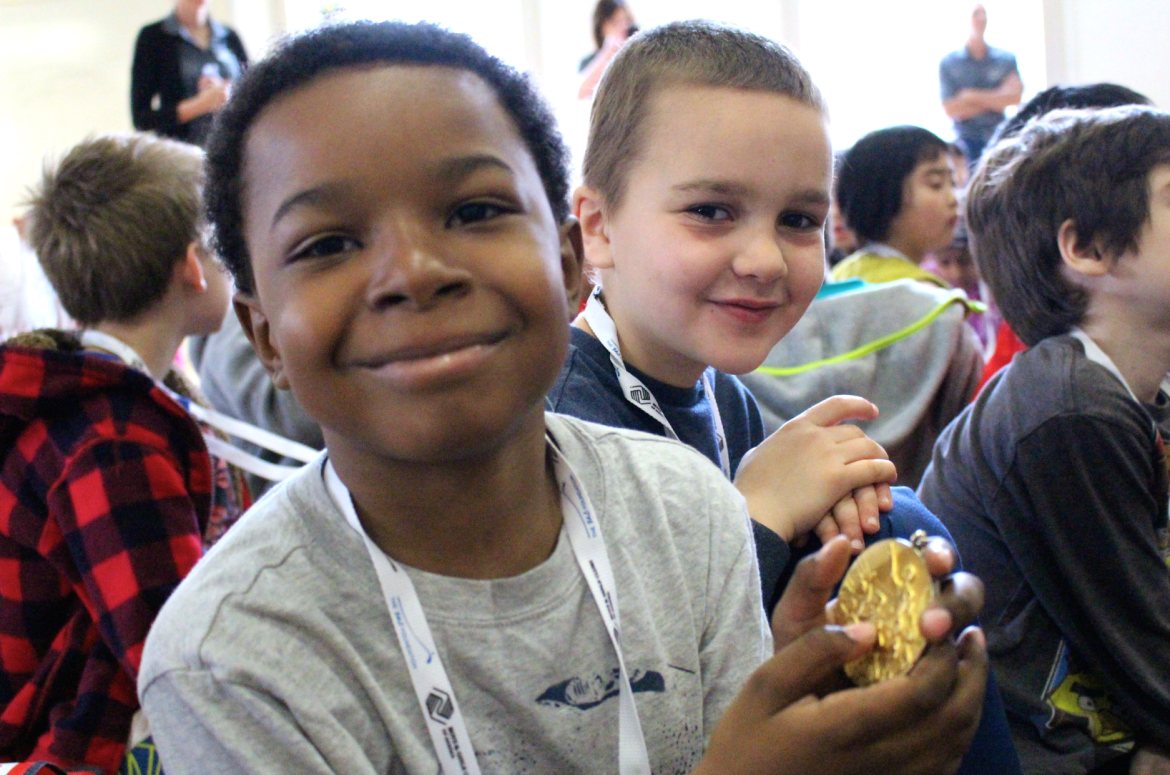 Children get to check out one of Rowdy Gaines’ gold medal he won as an Olympic swimmer. Credit: Leslie Yager 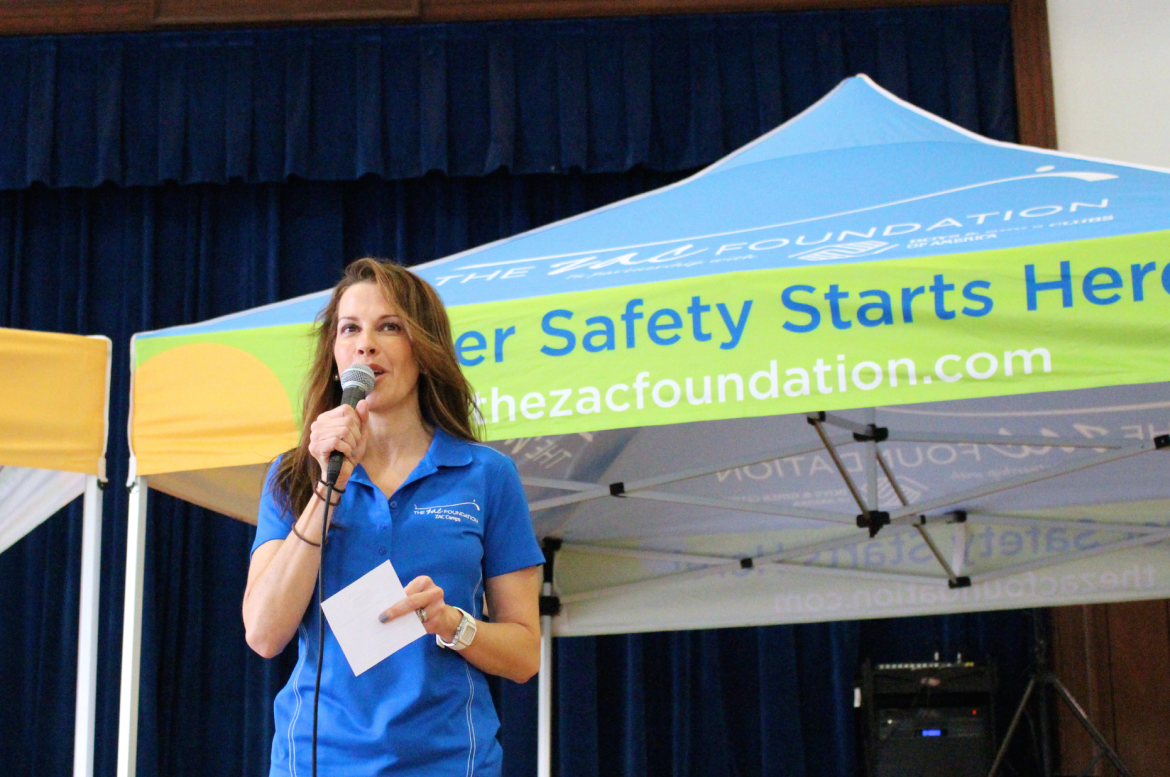 Karen Cohn summarized the ABCD’s of swimming safety: A is for Adult. Never swim without an adult present. B is for barriers, which are gates around a pool. Never climb over a fence or gate into a pool. C is for classes. Everybody needs to learn how to swim. D is for drain safety. Mrs. Cohn showed the children how to tell if a pool drain is safe. Credit: Leslie Yager

Karen Cohn showed the children a photo of her son Zachary, who she said was a really good swimmer.

“We didn’t know that the drain cover could come off and he could get stuck in it,” she explained to the children, adding that her family’s goal is to keep children and families safe in the water. 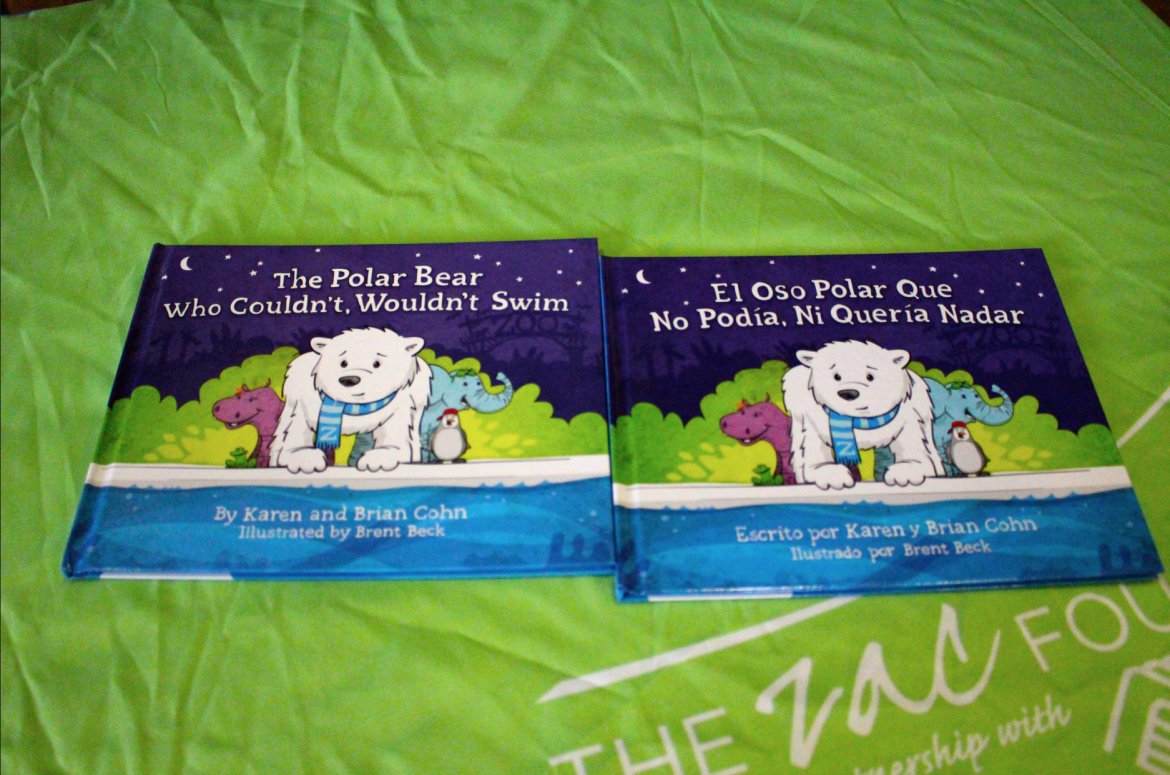 Karen and Brian Cohn wrote The Polar Bear Who Couldn’t, Wouldn’t Swim, which they offered to all the children at ZAC Camp in their choice of English or Spanish. Credit: Leslie Yager

The weeklong ZAC Camp, which was started on a trial basis here in Greenwich is now one of 20 across the country. The week includes swimming lessons and safety sessions with Greenwich Emergency services providers. There is some classroom time, during which a children’s book co-authored by Zachary’s parents,  The Polar Bear Who Couldn’t, Wouldn’t Swim, is a resource.

Drowning is the leading cause of accidental death in children ages 1-4 and the second leading cause in children 5-14, according to the Centers for Disease Control. Risk of drowning is highest in minority populations with the fatal drowning rate almost three times that of Caucasian children. Many of these deaths are preventable if proper water safety measures are taken.

More information on the ZAC Foundation is available online or on Facebook. 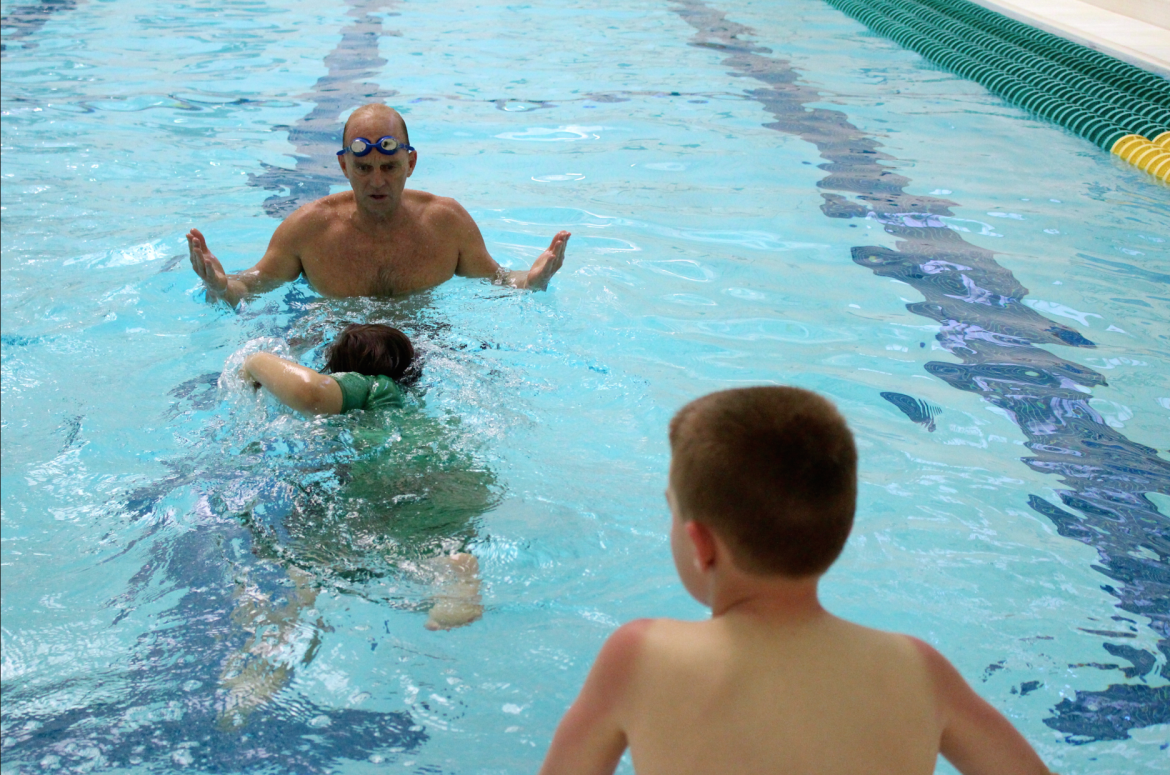 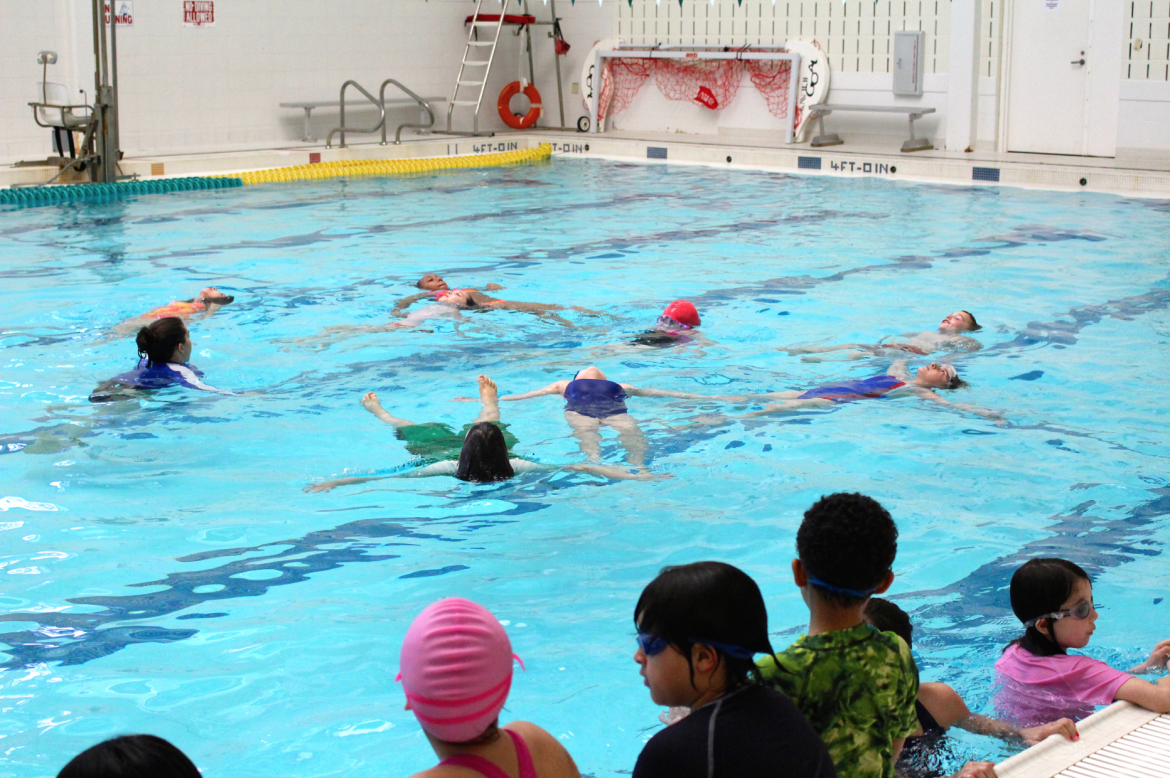