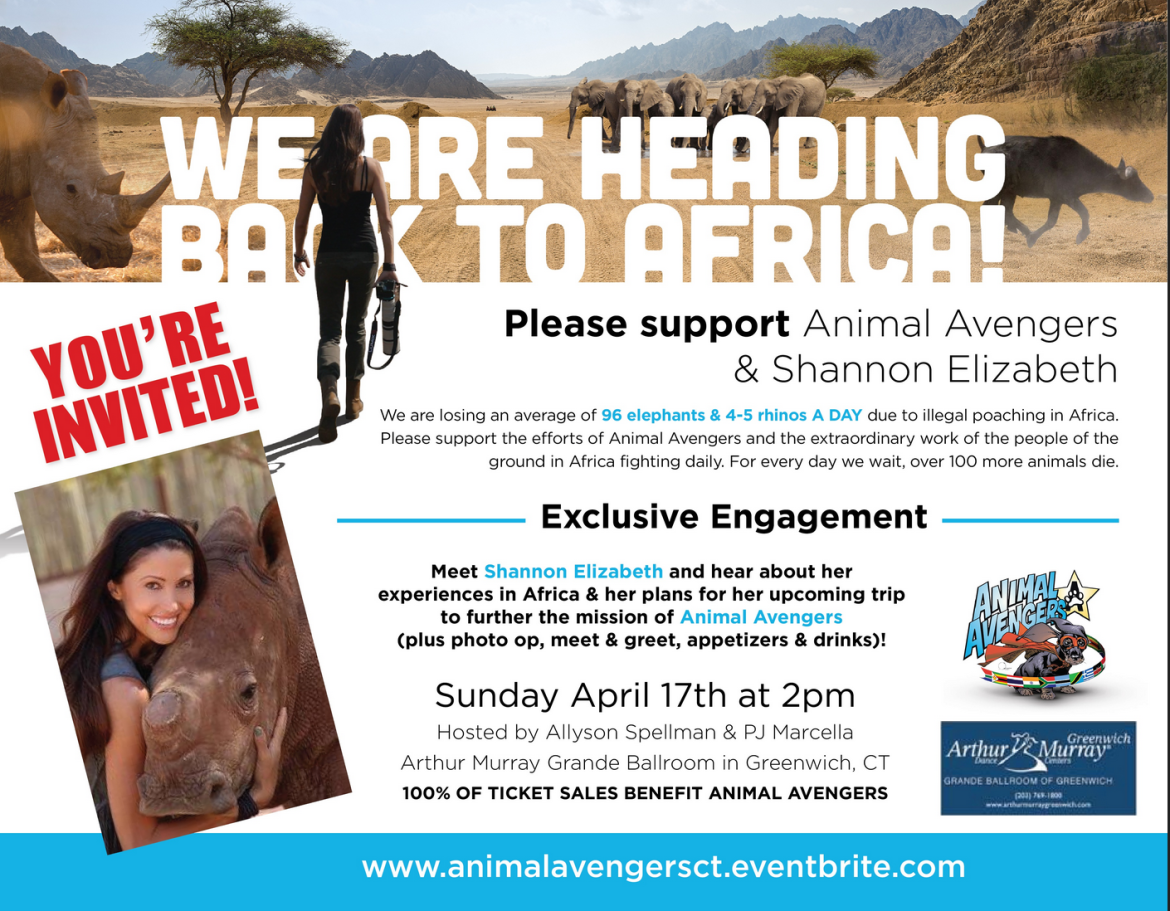 Arthur Murray Grande Ballroom of Greenwich is hosting an exclusive and intimate event “Shannon Elizabeth & Animal Avengers: Back to Africa” on Sunday April 17, 2016. The event will bring awareness and support to Shannon Elizabeth’s non-profit Animal Avengers that is currently assisting anti-poaching units as well as organizations and people in Africa who are protecting and saving endangered animals while supporting the surrounding communities in the process.

Elizabeth who has appeared in over 50 films and television shows started Animal Avengers in 2001 as a cat and dog rescue that has now evolved to helping animals on a bigger scale while also helping the communities around them, and ultimately our ecosystem and planet. She is headed back to Africa the end of April 2016 to further her mission to stop the illegal slaughtering on average of 96 elephants and 4-5 rhinos a day and save them from extinction.

“Shannon Elizabeth & Animal Avengers: Back to Africa” is co-hosted by Allyson Spellman and PJ Marcella.  The event will include Elizabeth sharing her personal experiences on her last trip to Africa and her plans for her upcoming trip, a meet and greet with the celebrity activist, photo opportunities with her, Q & A, appetizers and drinks.

100% of proceeds from ticket sales will go directly to Animal Avengers to support her upcoming trip to Africa where she will continue her work with anti-poaching units, wildlife trusts and other organizations that are protecting endangered animals from illegal poaching.

To learn more and to register for the event held at Arthur Murray Grande Ballroom of Greenwich, 6 Lewis Street in Greenwich on Sunday April 17, 2016 starting at 2:00 pm, visit www.animalavengersct.eventbrite.com.

Animal Avengers is a non-profit charity started by Shannon Elizabeth that is dedicated to the welfare of all animals and giving a voice to those who have none. The mission is to save as many animals on this planet as possible through strategic collaborations, engagement with policy makers, financial aid, hands on work in the field, education & tactical planning/execution for the future.

The focus for 2016 is currently supporting anti-poaching units, vets & various people & projects in Africa who are protecting & saving endangered animals, supporting the surrounding communities, educating our youth & working at government levels to create lasting change.  The goal of Animal Avengers is to assist in creating positive, enduring change in this world that is impactful long after we’re all gone. www.animalavengers.com