Eversource made its presence known in Greenwich this week as they began to prep for installing the new 115-kilovolt (kV) electric transmission line under approximately two miles of local streets by putting up temporary construction fencing in Bruce Park.

Another project Eversource is undertaking is to replace poles and install new lines along several miles of Greenwich’s roadways.

The goal of the pole replacement project is to deliver increased resiliency and reliability for customers.

“When completed, we’ll have the ability to more easily re-route power around the Town, and that redundancy will help reduce the length of, and frequency of outages, should they occur,” the utility said. 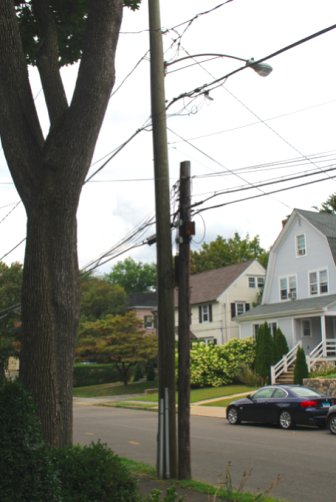 That is known in Town Hall as “double wood.”

Once the new pole is installed, each utility is responsible for the transfer of their lines from Eversource’s old poles to their new ones.

“Whoever is on the current pole will be on the new one,” Gross added.

Gross explained the reason there are three poles at  intersection of Maple and East Putnam Ave (by the hill where each year crocuses mark the beginning of spring). He said the new pole is from a previous project and is braced for additional stability, and that the older, shorter pole will eventually be removed. 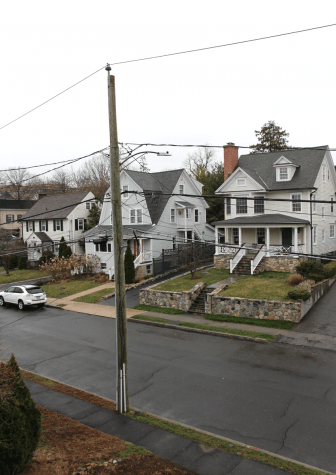 New, taller pole on Lincoln Avenue. The old pole has been removed and the utility installed an LED light on the pole. Last year that LED light replacement program, which has many benefits, got started in towns where Eversource owns the poles.

For now, he said, the old pole still has telephone or cable/internet lines on it.

“Once the utility that owns those lines relocates them to the braced pole, the shorter pole will be removed,” he said.

“The project is part of the work we committed to doing following the Labor Day 2018 power issues.  Our goal is, weather permitting, to have this work completed by late summer,” Gross said.

Eversource said that about eight miles of work are associated with the pole replacement project:

The lights reduce the amount of energy used, have a longer lifespan, and lower maintenance needs. The LED lights fit well into the goals of the Town to be more energy conscientious and reduce energy demands.