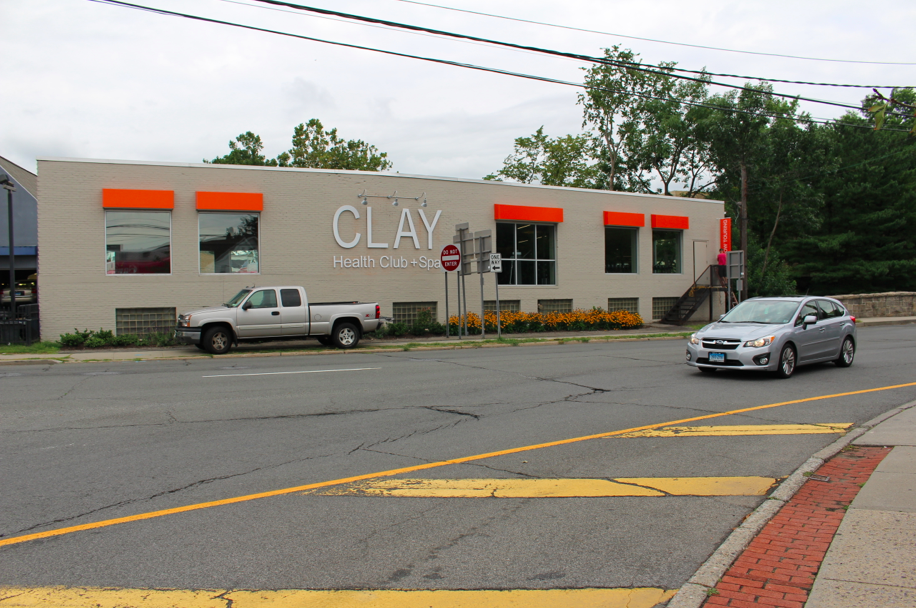 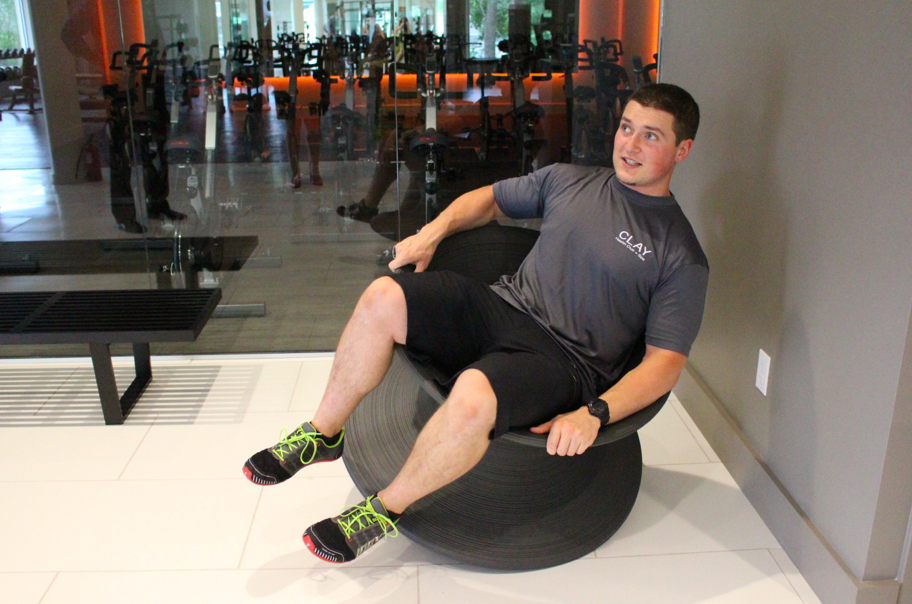 David Mychajluk who commutes from the Westport area to CLAY, demonstrates a unique chair. “The first time you try it you have the sense that you will fall over. But you can’t fall over in this chair,” he said. Credit: Leslie Yager

The countdown to the opening of CLAY Health Club + Spa’s Greenwich location is down to the single digits.

The unique fitness club, with its mantra, “from our temple to yours,” lives up to its promise with a luxurious array of amenities, professional staff and indulgent services. 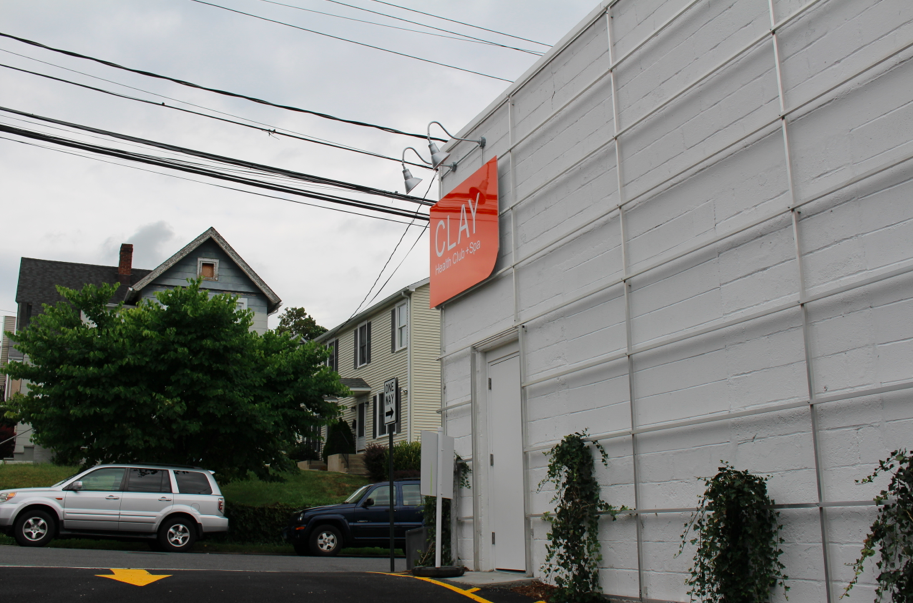 The vast expanses inside the bulky three-story building at 11 Riverdale Ave in Port Chester are filled with room after generous room. Indeed, the Sept. 2 opening of the 37,000 sq ft facility that was formerly an auto parts warehouse just over the state line from Greenwich was four years in the making.

Years of planning are evident on all three stories of the facility. And, while the wood floors of the warehouse have been restored, that is about the only reminder of the building’s previous incarnation. 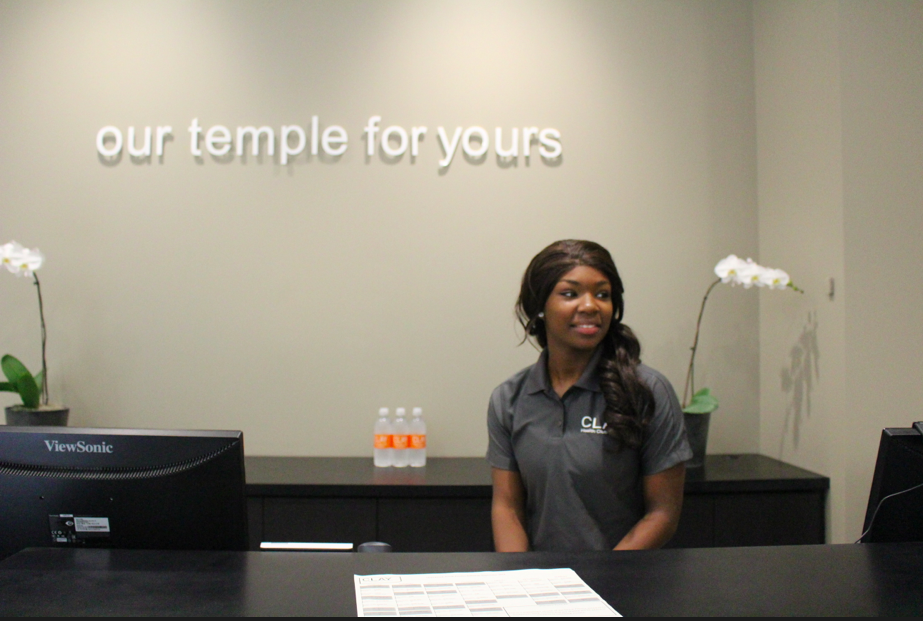 Koreen Elliott of Stamford is ready to greet members at CLAY, just over the state line in Port Chester, NY. Credit: Leslie Yager

“We’re not a muscle or body building facility,” said Root. “This is for regular people who want to get in shape.”

In addition to the vast array of equipment, unique amenities and services that range from child care in the “CLAY Play House,” to facials and massages, to one-on-one sessions with a pilates instructor or with Michael Manavian, the on-site golf pro, membership is capped.

Though Root said the hard number for membership cut-off has yet to be determined, he said staff would first get a feel for the ebb and flow of members on any given day and look for patterns.

And because so many Greenwich residents work in Manhattan, where CLAY has its original location near Union Square, it is possible to have a dual membership. 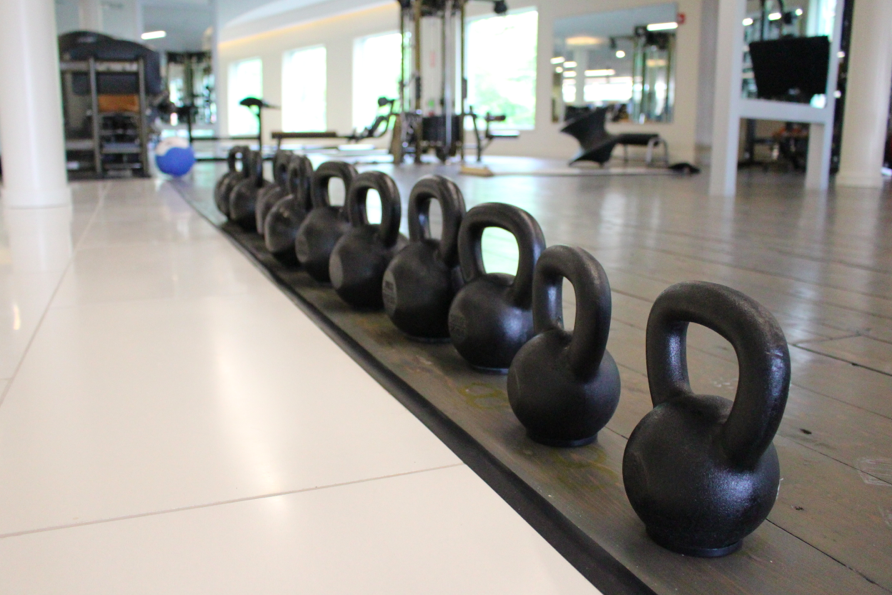 A row of kettle weights atop the original floor of 11 Riverdale Ave, where once was an auto parts operation. Credit: Leslie Yager

On a tour of the facility, the list of special touches features a “Mother’s room,” where a little privacy comes in the form of a comfy upholstered chair and private phone.

Upstairs, a row of tatami mats lines a wall of picture windows overlooking the Byram River and its canopy of trees.

At the top of the stairs an organic café flanks a rooftop sundeck, where members can enjoy breakfast or lunch. 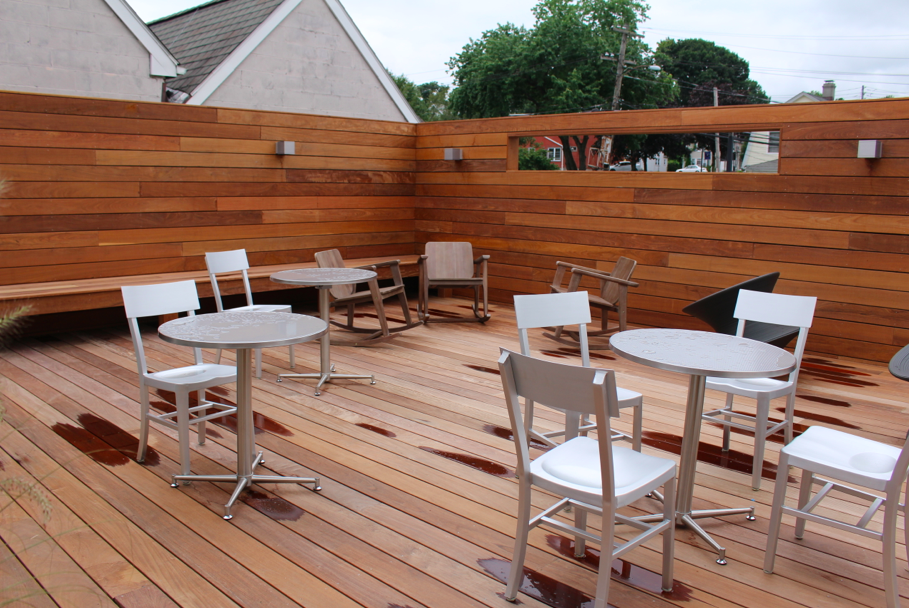 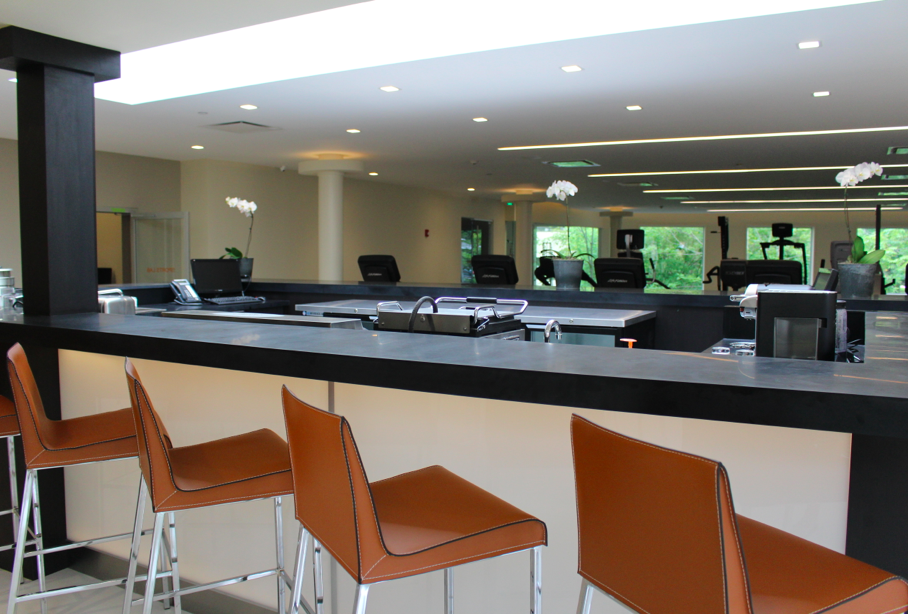 Indeed, once inside the vast expanses that comprise CLAY, with its array of sky lights and picture windows overlooking the river, one quickly forgets she is across the street from the traffic Island at the state line and long-time home to Dougie’s Stand By and Carvel. 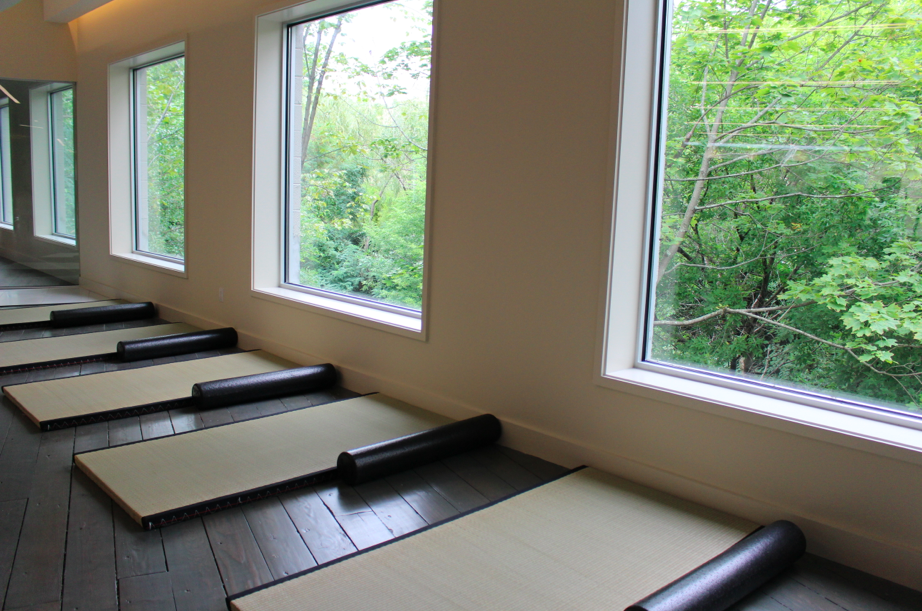 Tatami mats along a bank of over sized windows that overlook a canopy of trees and the Byram River. Credit: Leslie Yager

And, rather than feeling like you’re walking into a night club, at CLAY the feel is more zen like and pampered. Root says the key difference between CLAY and other fitness clubs is the way wellness is integrated into the offerings. The operation features an organic café with menu prepared a local caterer and nutrition services. 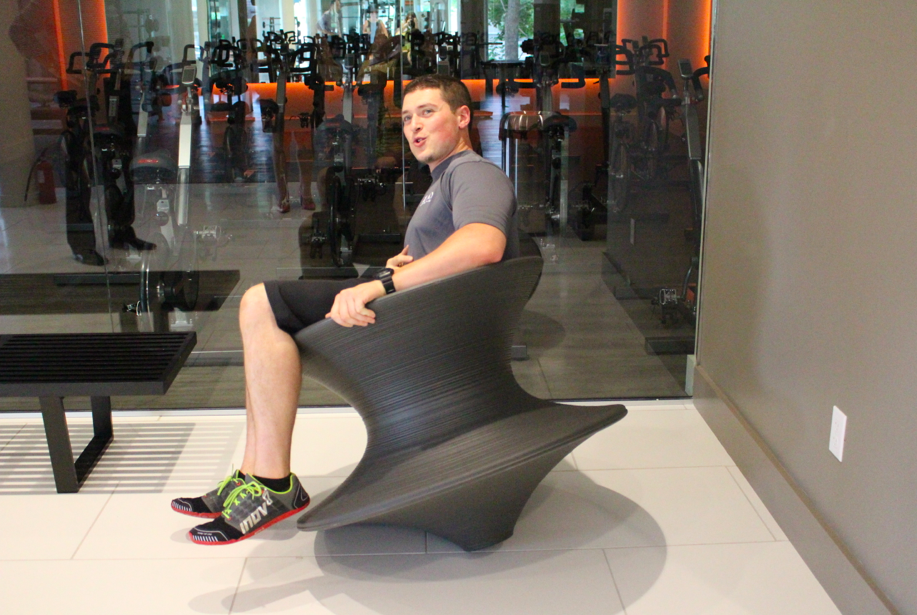 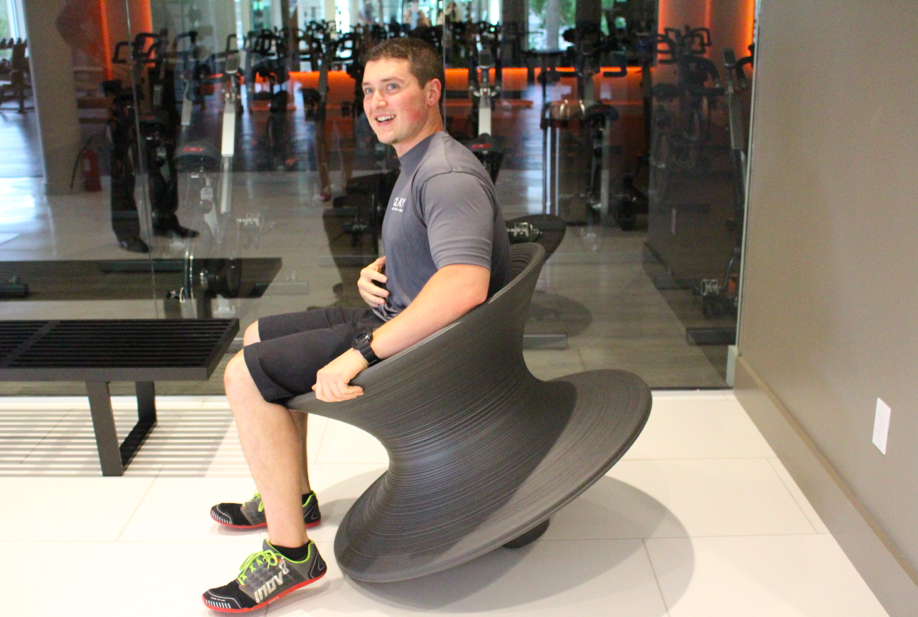 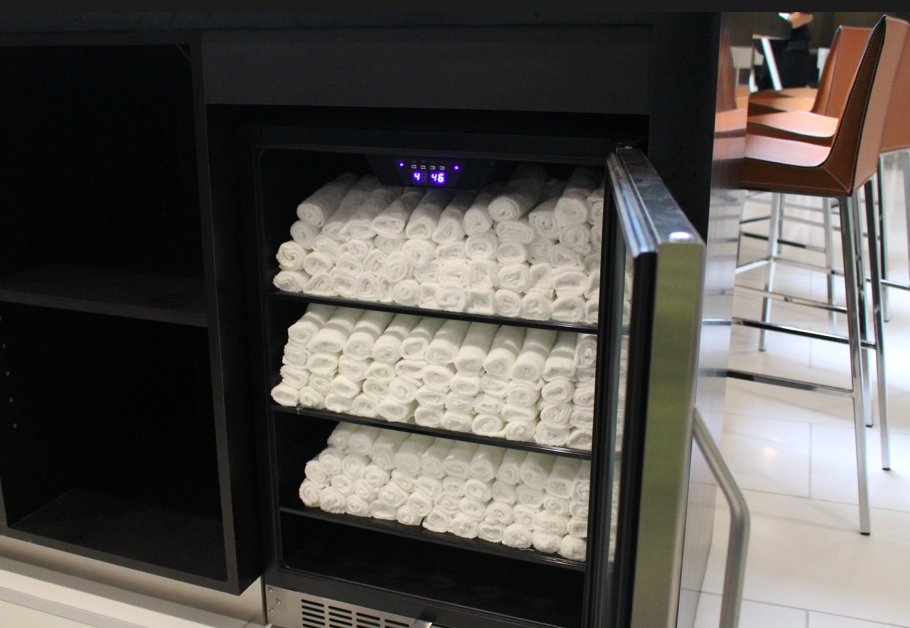 Sound deadening panels float from the ceiling of CLAY’s yoga studio. Indeed the music in the main room went silent once the doors to the yoga studio closed. Credit: Leslie Yager 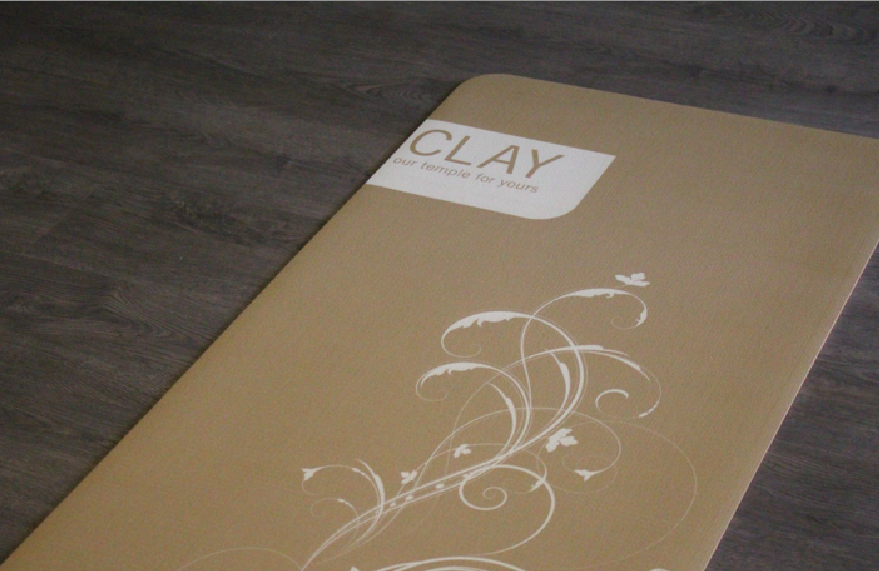 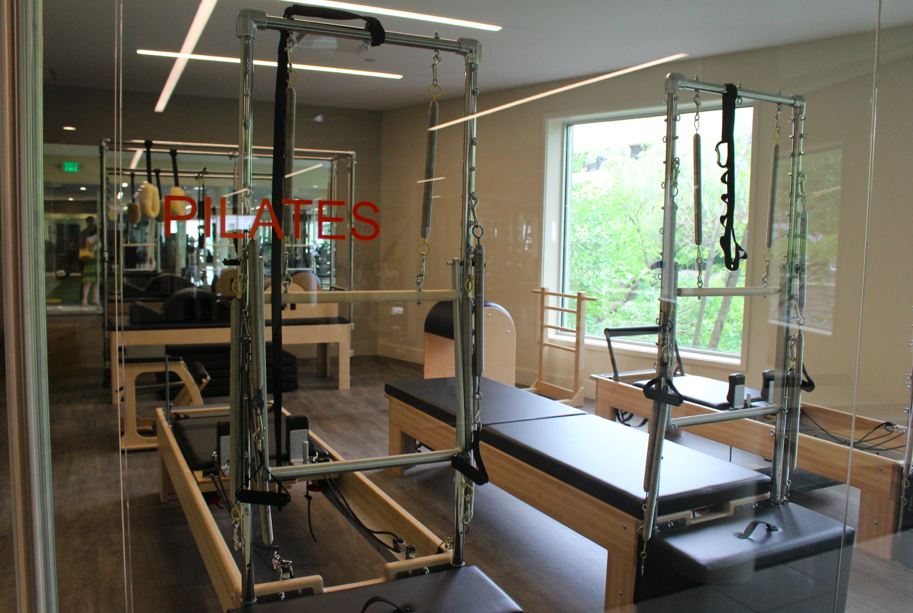 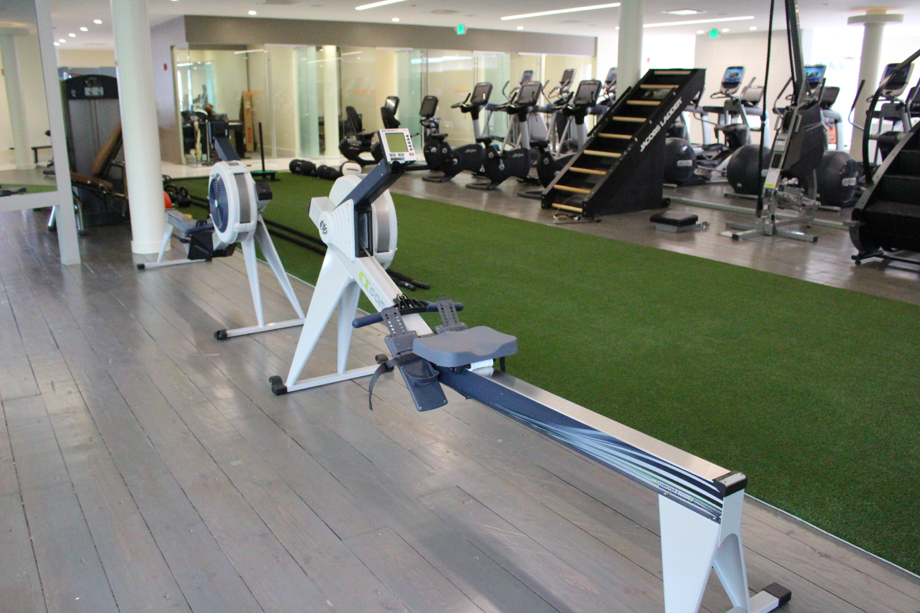 Rowing machines in the foreground. A 10 ft by 50 ft section of turf where members can try sled-pulling or work with heavy ropes. Credit: Leslie Yager 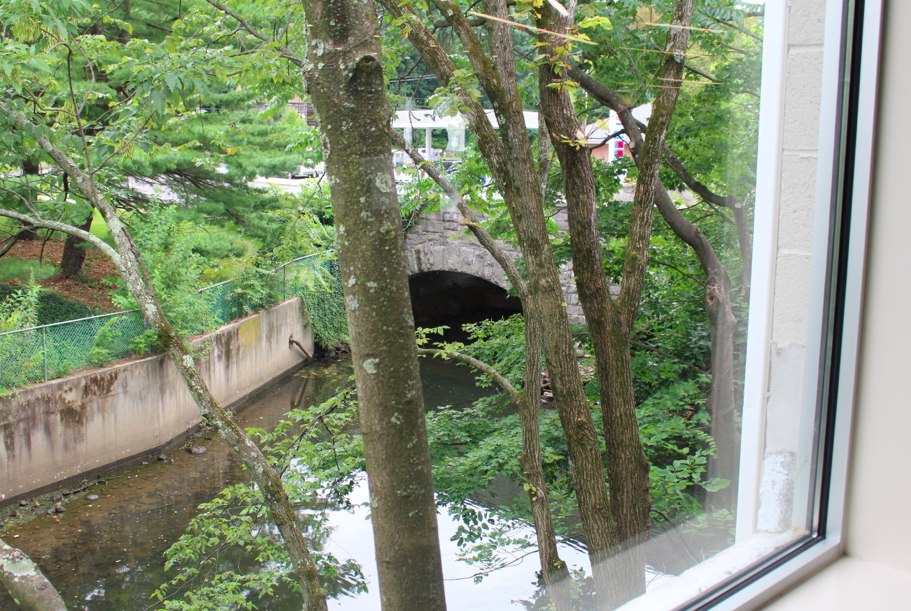 A wall of picture windows on the north side of CLAY benefits from the view of the Bryam River and its canopy of trees. Credit: Leslie Yager 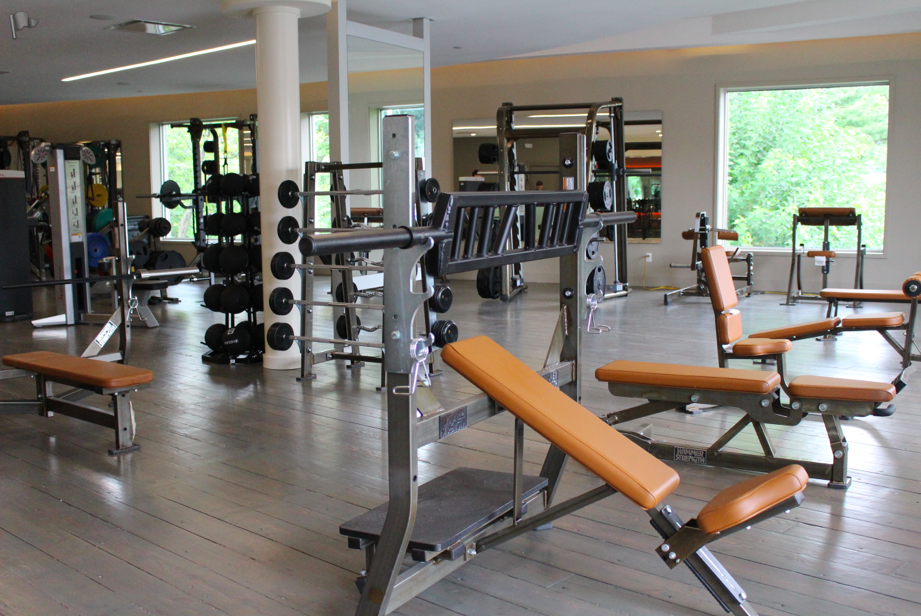 According to general manager Lance Root of CLAY Health Club + Spa Greenwich is the capped membership, which he described as a cornerstone of the brand. Credit: Leslie Yager 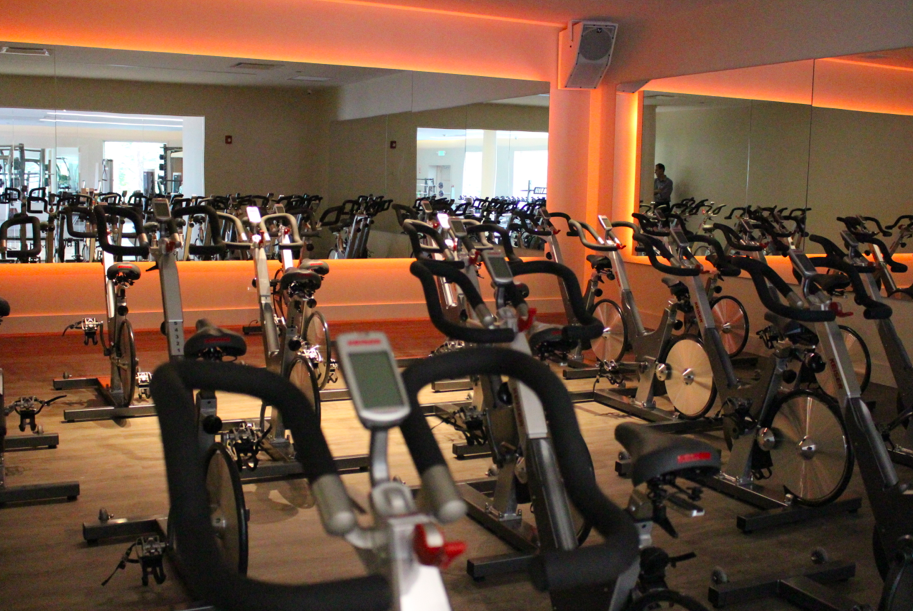 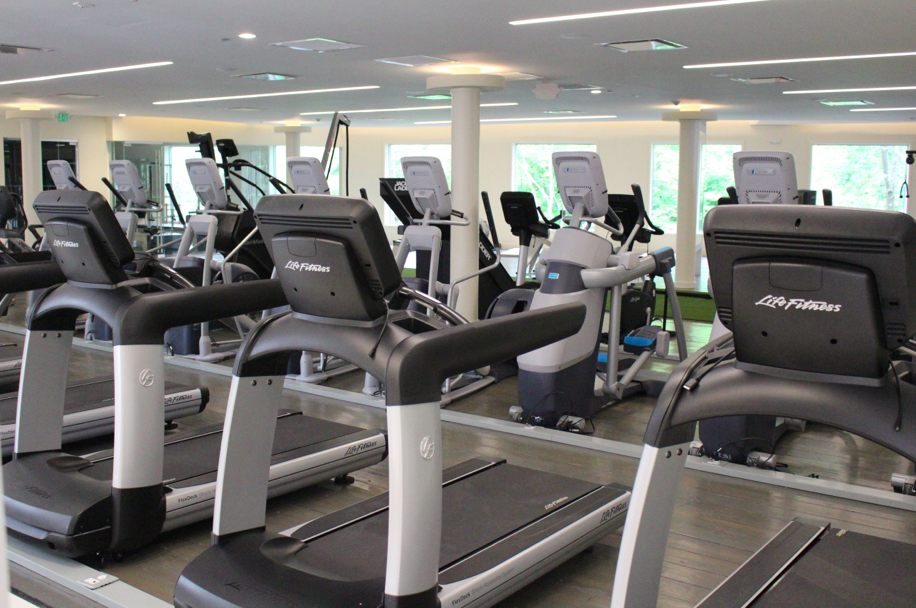 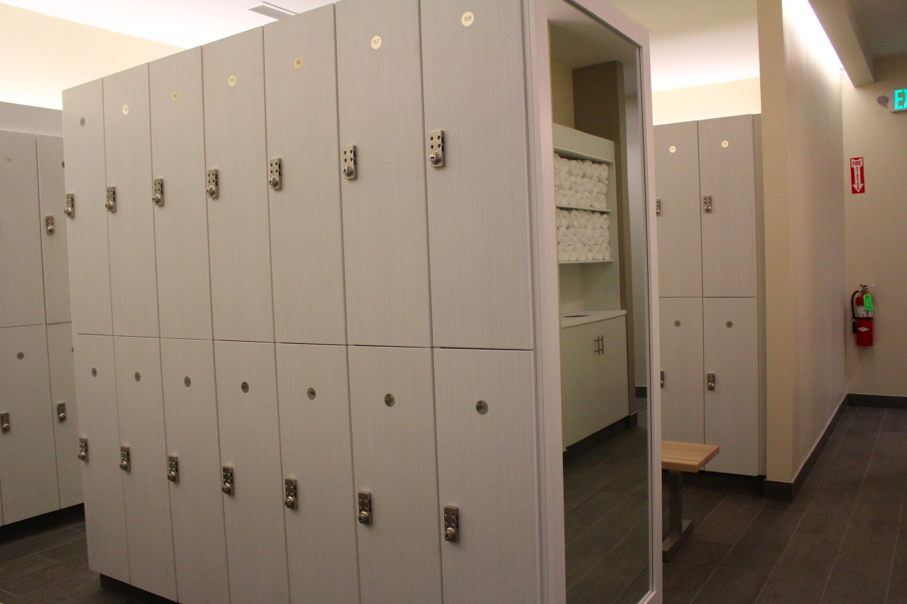 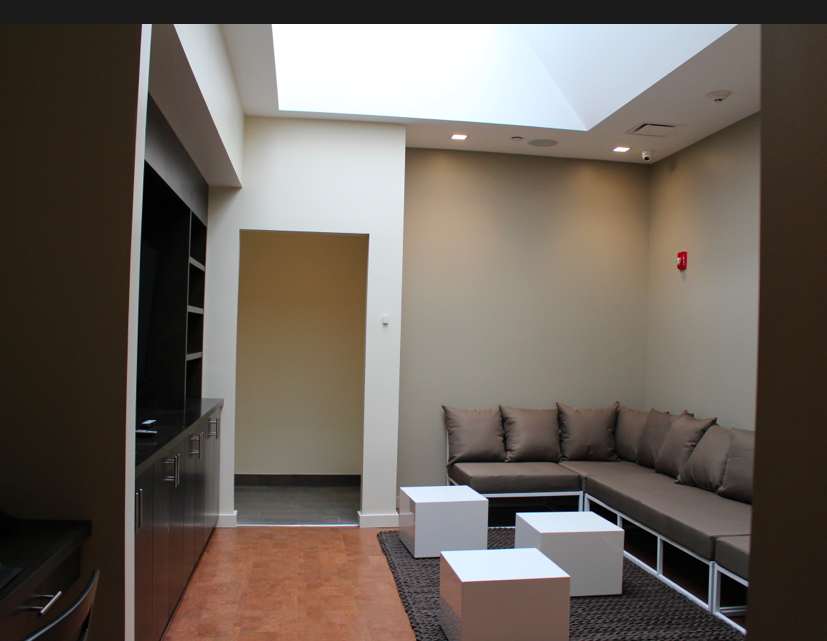 There women’s saunas and steam room at CLAY are duplicated on the men’s side. Credit: Leslie Yager 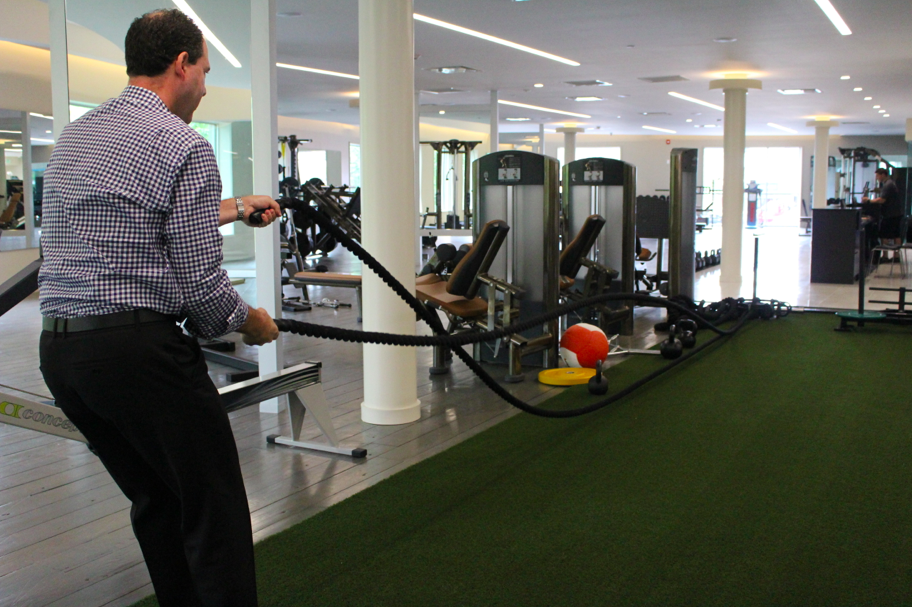 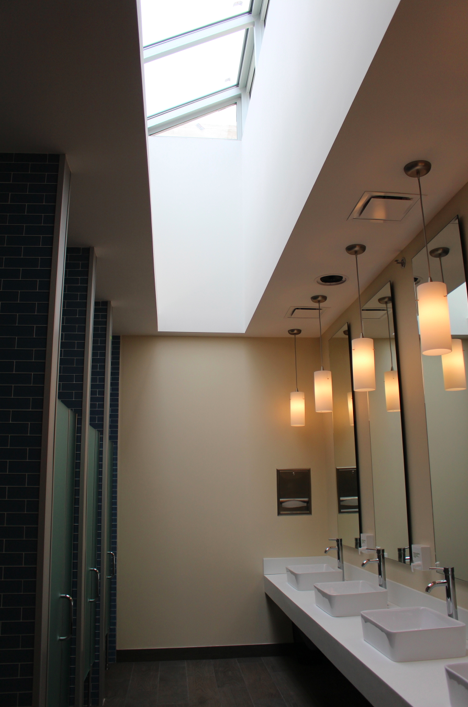