The sixth annual Greenwich 2016 Wine+Food Festival, presented by Serendipity magazine (www.serendipitysocial.com) and benefitting Paul Newman’s The Hole in the Wall Gang Camp, Wholesome Wave and The Greenwich Department of Parks and Recreation, has announced the headlining musical talent and celebrity chefs who will appear at this year’s festival.

“We wanted to give our guests an extra special night of music to cap off Saturday’s festival this year, so are featuring two co-headlining acts that are sure to get the crowd on their feet,” said Suni Unger, Founder & CEO of Serendipity magazine and the Greenwich 2016 Wine+Food Festival. “The combination of Ziggy Marley’s reggae with the American string band Old Crow Medicine Show will entertain everyone in attendance.”

“We are also excited to once again welcome back Connecticut’s own Kevin Bacon, along with his brother Michael, to join in our celebration and offer their unique blend of folk, country and rock music to an intimate group of attendees at the Master Chef Dinner on Friday night,” added Unger.

In addition to the musical acts, celebrity chefs Michel Nischan, Adam Richman and Marcus Samuelsson will participate in this year’s festivities, conducting cooking demos, mingling with guests and signing cookbooks.

At the Master Chef Dinner on Friday evening, Adam Richman will award Serendipity’s Most Innovative Chefs from across Fairfield and Westchester Counties who will serve their signature dishes.

Festival Ambassador Chefs will also be in attendance, preparing their best cuisine. The special evening is rounded out with renowned wine selections, creative cocktails and an auction. 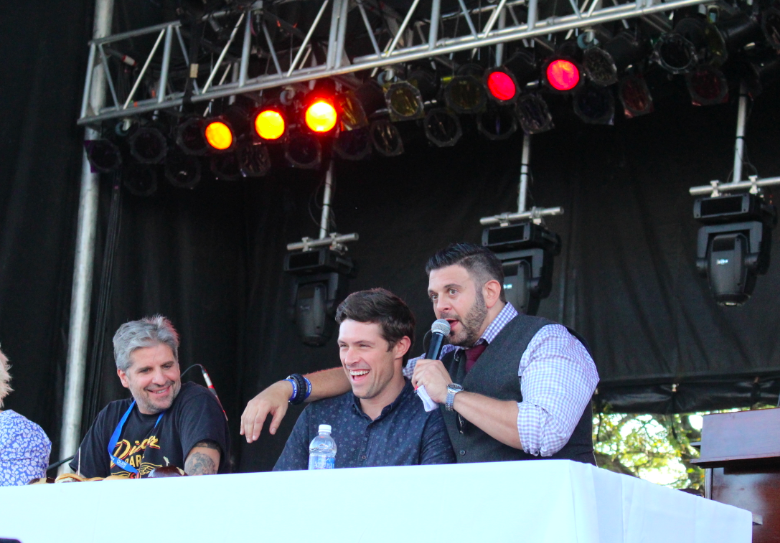 The celebration of local and national talent continues on Saturday, the signature day of the Greenwich 2016 Wine+Food Festival. The lineup features tastings and demonstrations from more than two hundred of the area’s finest food, wine, spirits and product vendors in the Grand Tasting Tent, as well as the Burger & Brew Tent, Grill Master Tent and Taco Party! There will also be a number of lively competitions, including the first annual Ultimate Sandwich Take-Down, the fifth annual Burger Battle and the third annual Top Bartender’s Showdown. Throughout the day, guests can enjoy sommelier presentations, celebrity book signings, and Q&A sessions with top culinary experts.

The Saturday VIP Pass with Intimate Dinner, featuring Marcus Samuelsson and Red Rooster Harlem, will give attendees the opportunity to sample the best of Harlem in a stunning waterfront setting. Award-winning chef, restaurateur and cookbook author Marcus Samuelsson will prepare a meal inspired by the roots of American cuisine at a seated dinner with table service (6:30-8:30pm). Attendees can take in the evening’s musical performance from private tables on an elevated stage ($525 per ticket) or from reserved, lawn table seating ($450 per ticket). Table packages will be available as well.

Visit www.serendipitysocial.com for more information and updates about the event schedule, participating celebrity and local chefs, musical talent and more.

The festival will be held rain or shine, and anyone under 21, including infants or strollers, will not be admitted. Pets are also not permitted.

His early immersion in music came at age ten when he sat in on recording sessions with his father, Bob Marley. As front man to Ziggy Marley and The Melody Makers, the group released eight best-selling albums that garnered three Grammys, with such chart-topping hits as “Look Who’s Dancing,” “Tomorrow People” and “Tumbling Down.” Ziggy’s first solo album, Dragonfly (RCA Records), was released in 2003.

Old Crow Medicine Show started busking on street corners in 1998, through New York and up into Canada, winning audiences along the way with their boundless energy and spirit. They eventually found themselves in Boone, North Carolina where they caught the attention of folk icon Doc Watson while playing in front of a pharmacy. He invited the band to play at his festival, MerleFest, helping to launch their career. Shortly thereafter the band was hired to entertain crowds between shows at the Grand Ole Opry in Nashville, TN.

It’s been over fifteen years since these humble beginnings. The band has gone on to receive the honor of being inducted as members of the Grand Ole Opry, and have won two Grammy Awards: “Best Folk Album” for Remedy (2014) and “Best Long Form Music Video” for Big Easy Express (2013). Additionally, their classic single, “Wagon Wheel,” received the RIAA’s Platinum certification in 2013 for selling over 1,000,000 copies.

The Bacon Brothers are anything but a typical rock band. Brothers Michael and Kevin Bacon, each accomplished in their own right, play gritty rock that is unapologetically unique and authentic.  Their style can best be described by their first album title, Forosoco, a word describing the blend of folk, rock, soul and country influences.  Now, nearly 20 years later, The Bacon Brothers continue to impress audiences and critics with their soulful sound and their latest offering of Americana, 36 Cents.

Older brother Michael, an acclaimed musician and composer, and younger brother Kevin, an award-winning actor, combine to form The Bacon Brothers. Their childhood hometown of Philadelphia is the brothers’ muse for their eclectic blend of rock and soul.  Growing up in the City of Brotherly Love, Michael and Kevin were surrounded by music from an early age.

Michael started as a career musician in the 1960s, first playing gigs at Philadelphia’s Electric Factory with younger brother Kevin tagging along.  He later moved to Nashville to pursue songwriting, and his musical career took off.  Now, an Emmy Award-winning composer, Michael is credited with many original scores for film and television, most recently scoring the documentary “Good Fortune – The Story of Morgenthau.”

The GREENWICH 2016 WINE+FOOD FESTIVAL is a multi-day event that benefits The Hole in the Wall Gang Camp, a nationwide organization dedicated to helping children and their families coping with cancer, sickle cell anemia and other serious illnesses, as well as Wholesome Wave and The Greenwich Department of Parks and Recreation. The festival is sponsored by Serendipity magazine in partnership with Pepsi.