Last year he published Five College Dialogues, which he describes as written in Socratic dialogue with each dialogue presenting a separate problem.

Getting published wasn’t easy. However, after his queries were rejected countless times, he was accepted by TouchPoint Press.

In his second book to be published, A trip Down Reality Lane, a junior pursuing a degree in English has no plans for his future. He finds that living in the present is far better than the alternative. One morning he wakes up and embarks on an acid trip to the Boston Museum of Fine Arts with two of his friends. 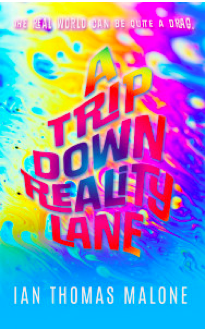 n his way back down to earth, three friends discover what matters most to them, and more importantly, that life is not so much about answers as it is about the exploration of the questions.

A Trip Down Reality Lane is published by Limitless Publishing and is available from all major booksellers including Amazon.

Ian Thomas Malone is an author and a yogi from Greenwich. He is a graduate of Boston College, where he founded The Rock at Boston College.

Malone is the grandson of noted Sherlockian scholar Colonel John Linsenmeyer. Ian has published thousands of articles on diverse subjects such as popular culture, baseball, and social commentary. His favorite things to post on social media are pictures of his golden retriever Georgie and his collection of stuffed animals.

Ian believes firmly that “there’s more to life than books you know, but not much more,” a quote from his hero Morrissey. When he’s not reading, writing, or teaching yoga, he can probably be found in a pool playing water polo. He aspires to move to the Hundred Acre Wood someday, though he hopes it has wi-fi by then.