For weeks, residents have anticipated the chance to order community tickets, priced at $85.00, to enjoy a day of socializing and live music that will culminate in a performance by headliner Eric Clapton.

Releases from GTP have stated that tickets would be available for purchase on a first-come, first-served basis on the GTP website on Thursday, April 5.

On Thursday morning residents who went online at 10:00am on the dot were told they were in a “queue” and to have their credit cards ready. A spinning icon rotated at the top of the page for a couple minutes, until finally the Reserve Tickets page popped up. But for many, as early as 10:02am, the community tickets were already sold out. 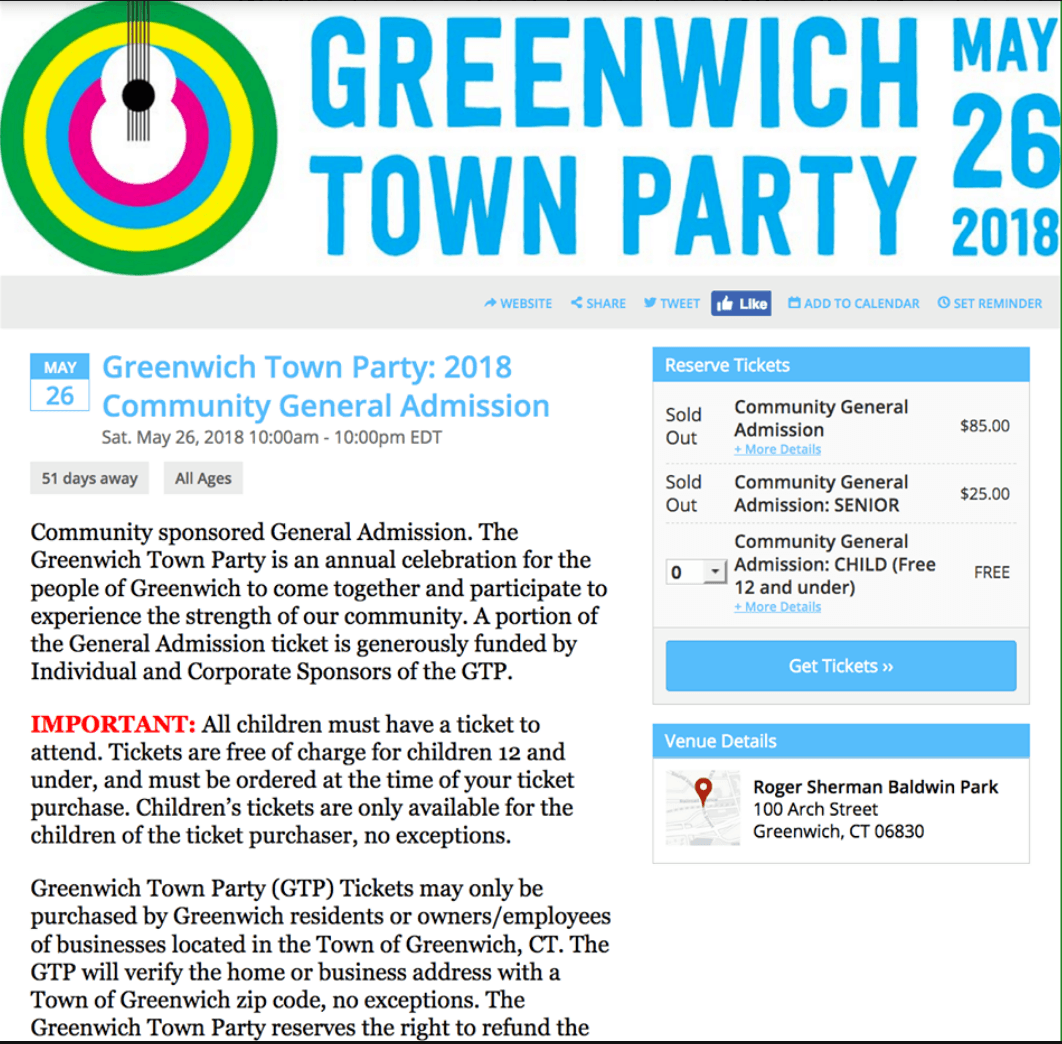 Incredulous residents took to Facebook immediately to voice their disappointment, anger and confusion at how thousands of tickets could sell out so quickly.

“It’s unbelievable! Being put in queue for 2 mins and they were all sold out at 10.02 am,” wrote one resident on the Greenwich Free Press Facebook page.

“I’m very curious who were able to get tickets – so far all I’m hearing is people being shut out,” another longtime resident wrote.

Over on the Greenwich Town Party Facebook page, there were many more complaints.

At 1:30pm, Greenwich Town Party’s co-president Ray Rivers sent a statement out to the media explaining that the process was actually a lottery and thanking all those who were able to purchase community tickets.

“Ticket sales went live at exactly 10:00am, and we had a huge demand this year,” Rivers wrote. “All 5,600 Community tickets were purchased within minutes.”

Rivers said the sale worked as a lottery, and that everyone online at 10:0am had an equal chance to make a purchase of up to six tickets.

“The demand was significantly greater than supply,” he wrote. “We wish we could accommodate everyone who wanted to purchase a ticket.”

Rivers said that throughout the year, GTP promote and offer a variety of opportunities to purchase tickets prior to the official sale date.

Rivers also said that from August to mid-November, Community tickets were available for “early bird” purchase for $125 on the GTP website for those who wanted to guarantee entry this year, even prior to the artist announcement.

Lastly, Rivers noted that GTP is a non-profit organization. “Thanks to the continued support and generosity of GTP sponsors and donors, the Community tickets are sold at a significantly discounted price. Our goal has always been to bring people together to celebrate the strength of the community and enjoy a day of amazing music, food, family and friends.”