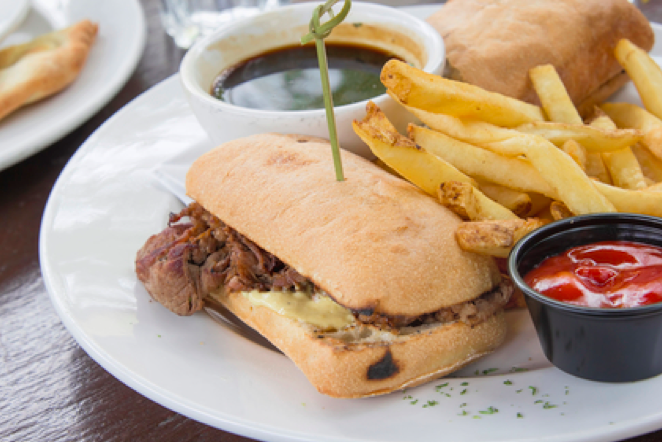 Seriously, I don’t know anyone who doesn’t love a good Philly Cheesesteak. The Philadelphia Cheesesteak Sandwich was created in the early 1930’s and has been popular ever since and has over time become a popular street food here on the East Coast. If you’re ever in Philly you might want to stop into Pat’s King of Steaks, which is where this famous sandwich originated.

In the meantime you can make your own at home and I think this is a perfect sandwich for game day parties. Throwing a Super Bowl party? Make a few of these sandwiches and cut them into halves or quarters and watc them disappear.

Split rolls almost all the way through. Layer roast beef and onion mixture in rolls. Top with cheese.

Place on baking sheet or broiler pan. Place under broiler about 6 inches from heat. Broil 3 minutes until cheese is melted.  Make sure to keep an eye sandwiches so they don’t burn. Remove from oven and let rest for 1 minute.  Slice or serve whole.  Serves 4
Prep Time: 20 Minutes
Cook Time: 8 Minutes
Total Time: 28 Minutes
“Work With What You Got!”