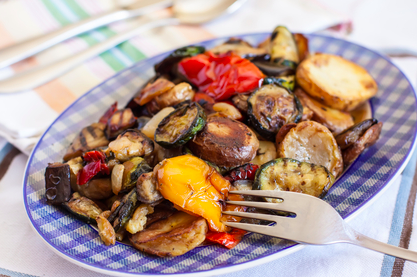 Grilled vegetables are so good. Feel free to exchange vegetables if you want. To roast peppers place them on a baking sheet and broil them 3 to 4 inches from the heat. Use tongs to turn them often until they are blistered on all sides, about 20 minutes. Don’t worry if parts of the skin blacken. Place peppers in a paper bag for 10 minutes to steam. Then peel and cut them as desired.

Preheat your oven to 450 degrees. Sprinkle a griddle with kosher salt and heat it. Brown eggplant and zucchini lightly on heated griddle, turning often. Remove and drain on paper towels. Brush endive and radicchio with olive oil. Grill until golden brown. Drain on paper towels. Arrange all vegetables on an ovenproof platter. Bake for 5 minutes. Sprinkle with Gorgonzola and bake 1 minute longer or until cheese melts. Remove from oven and use a paper towel to remove excess liquid from platter. Sprinkle vegetables with 1 tablespoon olive oil and serve hot. Serves 4