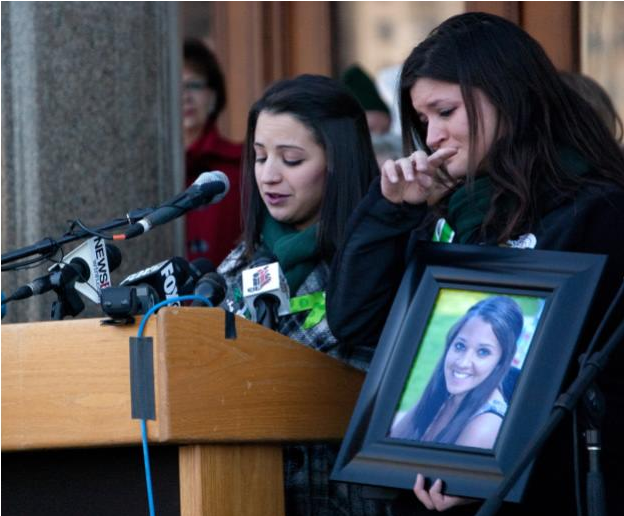 Jillian Soto, accompanied by family members, spoke about her sister Victoria at the March for Change rally at the State Capitol in Hartford February 14, 2013. Victoria Soto, a teacher at Sandy Hook Elementary, died protecting a child during the Newtown shootings in December 2012. Photo, Mary Knight

By Mary Knight, Nov. 8, 2014
It’s odd to be so far away from Connecticut, the birthplace of my husband and myself, and still feel so connected.

Connected to Connecticut—it should be a state slogan.

We are living in Israel, far from our home state, for my husband’s work, but we are thrilled about Governor Dan Malloy’s re-election. I’m especially proud of him for his courage to stand for gun control, against Goliath—the muscle-bound and sadly misled gun lobby. Days after his re-election, I’m still smiling.

On a previous assignment, my husband was sent to Iraq, a posting that is unaccompanied by family members. That meant I had to stay at home instead of accompany him, as our children and I had done in the past. But our Washington area home was rented, so I found a year lease in our home state of Connecticut.

It was a great time to reconnect with my father after living so many years abroad. Yes, I was lonely and missed my husband, but I stayed busy doing photojournalism and hanging with Dad.

Just in the middle of my Connecticut interlude, the Sandy Hook shooting occurred, twenty miles up the road. Clunk. Heaviness and depression took root in my determined-to be-strong resolve, while Bill was away. I remember that I didn’t want to leave the house.

I cross-examined myself, as we all must have, trying to understand what I could have done to prevent this, and to know what to do now. I decided that I should have been louder about wanting gun limits –my family will smile sardonically because I’m already pretty loud.

At the suggestion of a news editor, I began writing a blog, and covered the March for Change to the steps of the Capitol in Hartford. At the rally, ordinary citizens related the events of their children’s deaths by guns, while Bridgeport Mayor Bill Finch and State Senator John McKinney joined Governor Malloy in clamoring for gun law change. Last year, Governor Malloy succeeded in passing a law that mandates stronger background checks for would-be gun owners, and bans high capacity guns in Connecticut.

March for Change organizers Nancy Lefkowitz and Meg Staunton, along with Connecticut Effect and other groups, begged the crowd to stay connected to the cause and to vote gun issues.

And they did. The re-election of a politician who stands against a seemingly invincible gun lobby is great news and deserves more than a drum roll. It calls for confidence among states that they can do the same. It calls for determination against a foe as deadly as the gun lobby, our own apathy.

My husband and I are thrilled to see that Connecticut voters, spurred on by Connecticut Effect, March for Change, CT Against Gun Violence and other groups, have sustained a strong voice against the proliferation of guns. With the re-election of Governor Dan Malloy, we look for continued forward movement on the gun issue

Ten Best Practices for Comfort in a Bomb Shelter

How I Learned to Stop Worrying and Love the Bomb Shelter