Greenwich Police released an update on Tuesday about the woman hit by a car on Monday morning on Mill Street at the intersection with Mead Ave.

Shortly before 9:00 am, the pedestrian was crossing Mill Street at the intersection of Mead Ave from the south side to the north side of the road within the crosswalk.

The pedestrian was struck by small passenger vehicle which was traveling eastbound on Mill Street.

The pedestrian rolled over the hood of the car striking her head against the windshield and was thrown to the ground and short distance from the initial impact.

The operator of the vehicle immediately stopped, remained at the scene, and attempted to attend to the pedestrian.  The pedestrian had suffered a head injury and was unconscious.  The pedestrian was transported to the Stamford emergency room by GEMS. As of 10:30 am Dec. 21, 2016, the pedestrian remains in ICU for observation but her prognosis remains positive.

Greenwich Police released a statement on Dec. 21 at 10:30am.

According to the statement, the Traffic Section investigated the incident and at the time of the collision and found that the operator of the motor vehicle had a steady green light and was operating at a safe speed.

According to Greenwich Police, the pedestrian was found to be in have violated CGS Sec. 14-300c(b) Hazardous Entrance Onto A Highway By A Pedestrian by failing to heed the special pedestrian-control signal located at the intersection. 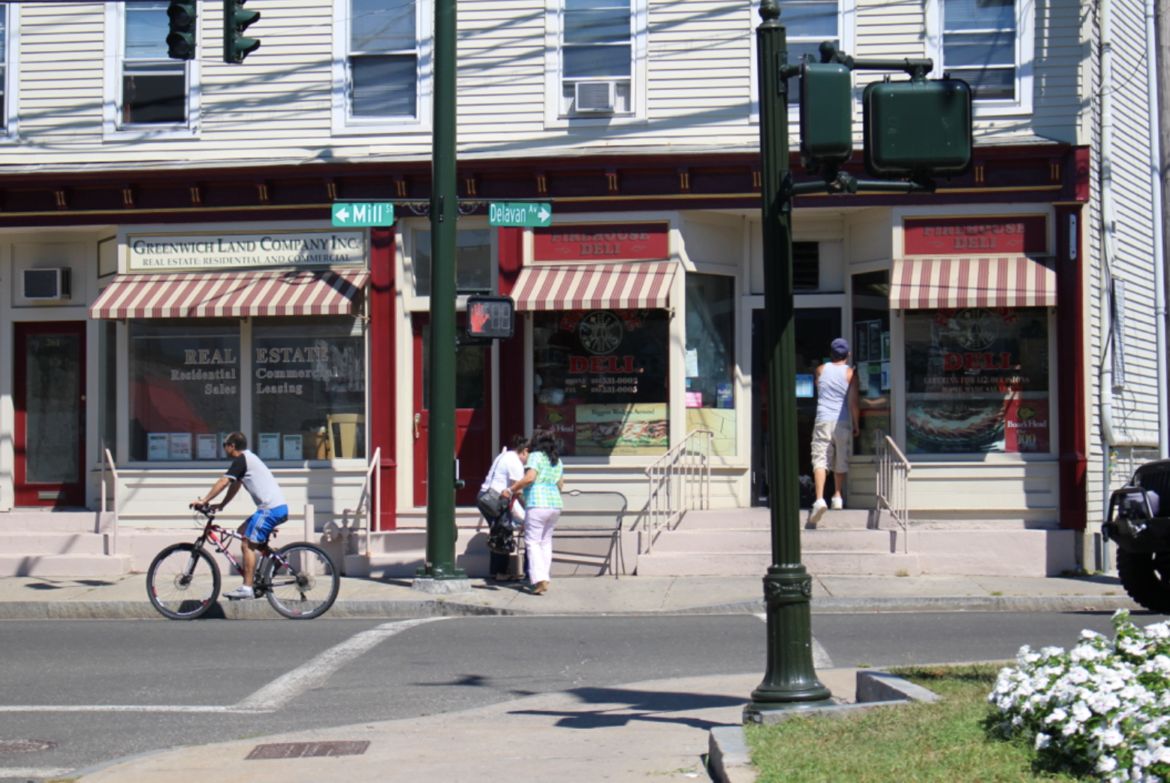 Please note that Mill Street has a name change at the Mead Ave intersection to Delavan Ave. Photo: Leslie Yager

Reported Accidents on Mill Street between Mead Ave and the State line. (This does NOT include Delavan Avenue. Please note that Mill Street has a name change at the Mead Ave intersection  to Delavan Ave)

No pedestrian accidents on Mill Street were reported in either 2014 or 2015 and this was the first in 2016.

12:30pm, Tuesday, Dec. 20, 2016
At Tuesday’s press briefing Lt. Kraig Gray said the woman who was hit at the intersection of Mill Street and Mead ave was crossing from the south side of Mill Street to the North  side when she was struck by a small passenger car. “Preliminary investigation by the traffic section determined she was struck and that the most serious injury she sustained was to her head,” Gray said.

The medical protocol  was to take her to Stamford Hospital where there is a Level 2 trauma center.

Lt. Gray said Greenwich Police, Greenwich Fire Dept and GEMS all responded and quickly attended to the woman’s injuries, and that the traffic section is investigating the accident. The investigation will include witness statements, physical evidence and video from merchants in the area that depict some of the accident.

11:00am Tuesday Dec. 20, 2016: Greenwich Police Lt. Kraig Gray released an audio statement Tuesday around 10:40am, about an incident involving a pedestrian being hit by a car earlier in the morning.

According to Lt. Gray, the pedestrian was struck by a passenger car at the intersection of Mill Street and Mead Avenue. The pedestrian received serious injuries and was transported to the Stamford Hospital Emergency Room, where she is being treated for head injuries.

“My preliminary understanding is she is a woman in her 30s,” Gray said, adding that the victim is a Stamford resident, who works in the Byram area.

Greenwich Police  are continuing to investigate at the scene and notifications are being made to the woman’s employer and family.

Lt. Gray said he expects to release the woman’s name some time on Wednesday.