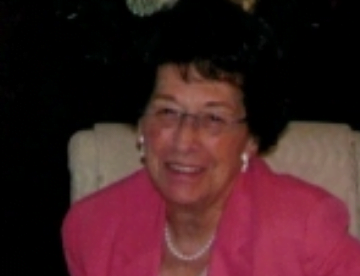 Frances L. Mackey died peacefully at her home on December 20th, surrounded by her loving family. She was 97 years old.

She was born on September 27, 1919 in the Bronx, NY to Frank and B. Louise (Bess) Hodson. After marrying her husband, John J. Mackey, they moved to Larchmont, NY, where they began their family.

In 1960 they moved to Old Greenwich, which was where she called home until her final days.

She worked for the NY Telephone Co. for 25 years and was a founding member of the Pioneer Club. She loved her many trips to various casinos, especially Foxwoods and those in Las Vegas. Many a time she accompanied her family and friends on these trips and was known as everyone’s “good luck charm.”

For many years, Fran spent weekends and summer vacations at “Mackey’s Tree Farm” in Honesdale, PA, where she made many close friends. Fran was also a long time parishioner of St. Clement of Rome Parish in Stamford.

Her greatest pride and joy was her family and nothing brought her more happiness than spending time with them. To this day, every table in her home is covered with family photos so that she could always hold everyone close, no matter how much distance separated them.

Fran is preceded in death by her parents, her beloved husband of 63 years, John J. Mackey and her son-in-law Ed Locke.

The Mackey family would like to thank all of the caregivers who provided Fran with love, comfort and friendship including Peguy, Shirley, Davetta, Marie, Linda, Fred, and Ruth.