At the Thursday’s Board of Education meeting, GHS headmaster Chris Winters and teacher Sarah Goldin gave an update on Innovation Lab – a “school-witin-a-school” that emphasizes project-based learning – and expressed their wish to extend the pilot program into a second year.

Dr. Winters said that there had been a groundswell of interest among Inn Lab students and parent to share their positive experiences with the board Thursday night, and joked that he’d become something of an Innovation Lab stalker.

“This program was designed with a powerful change model,” Winters said, adding that the Inn Lab teachers were empowered last year with a good amount of time to flesh out the program in advance. “We created a collaborative model, with the power to make decisions on a day to day basis.”

Dr. Goldin said an attitudinal survey of parents and students had found an extremely high level of satisfaction. She described Innovation Lab as a vibrant and supportive community, heterogeneously grouped, where differentiated learning takes place.

For example, she said there are five math classes and two different levels of science going on in the STEM class at once and you wouldn’t know it. “They help one another. They mingle and mix, and challenge each other. Each of them is challenged to their level.” 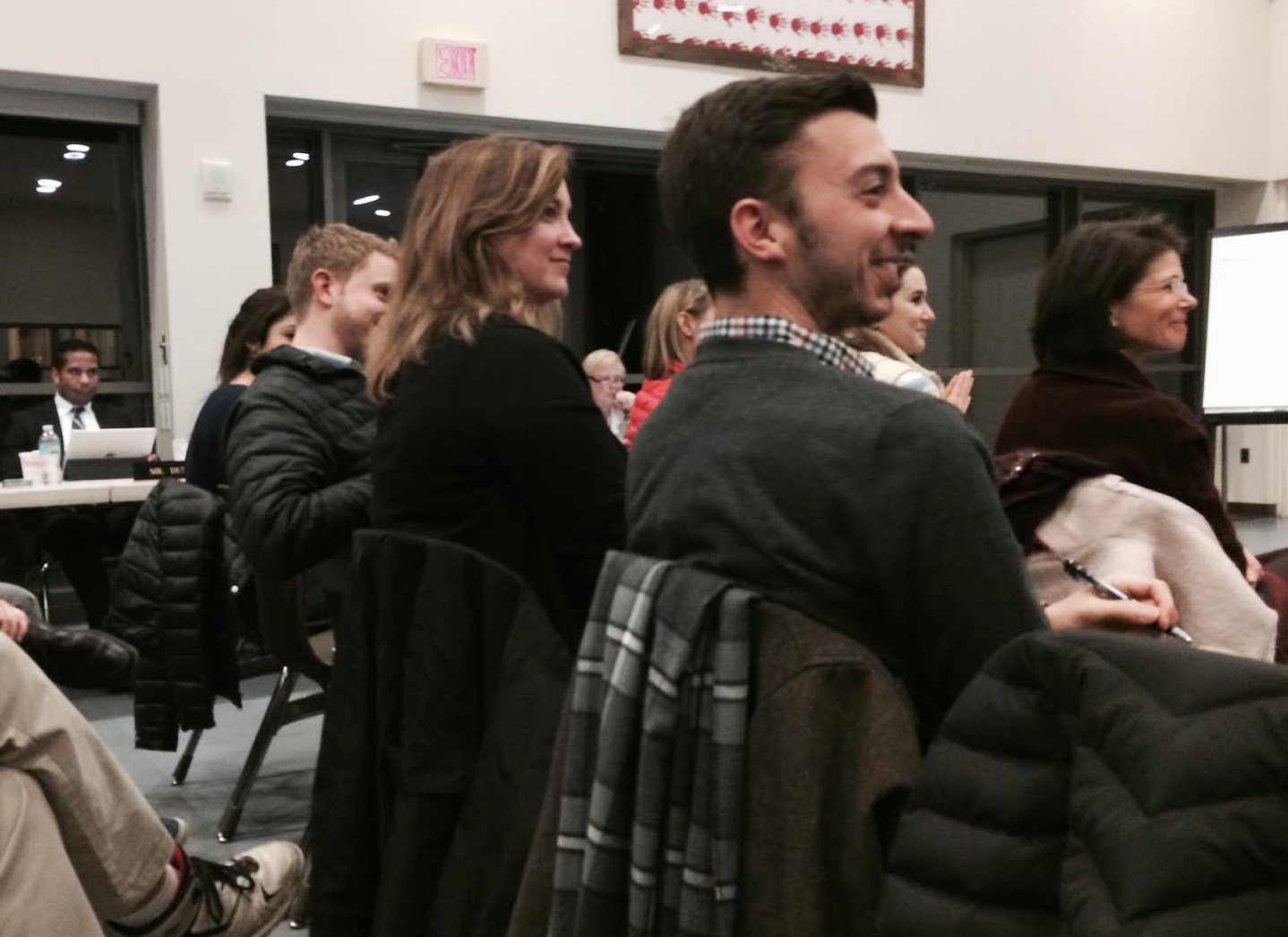 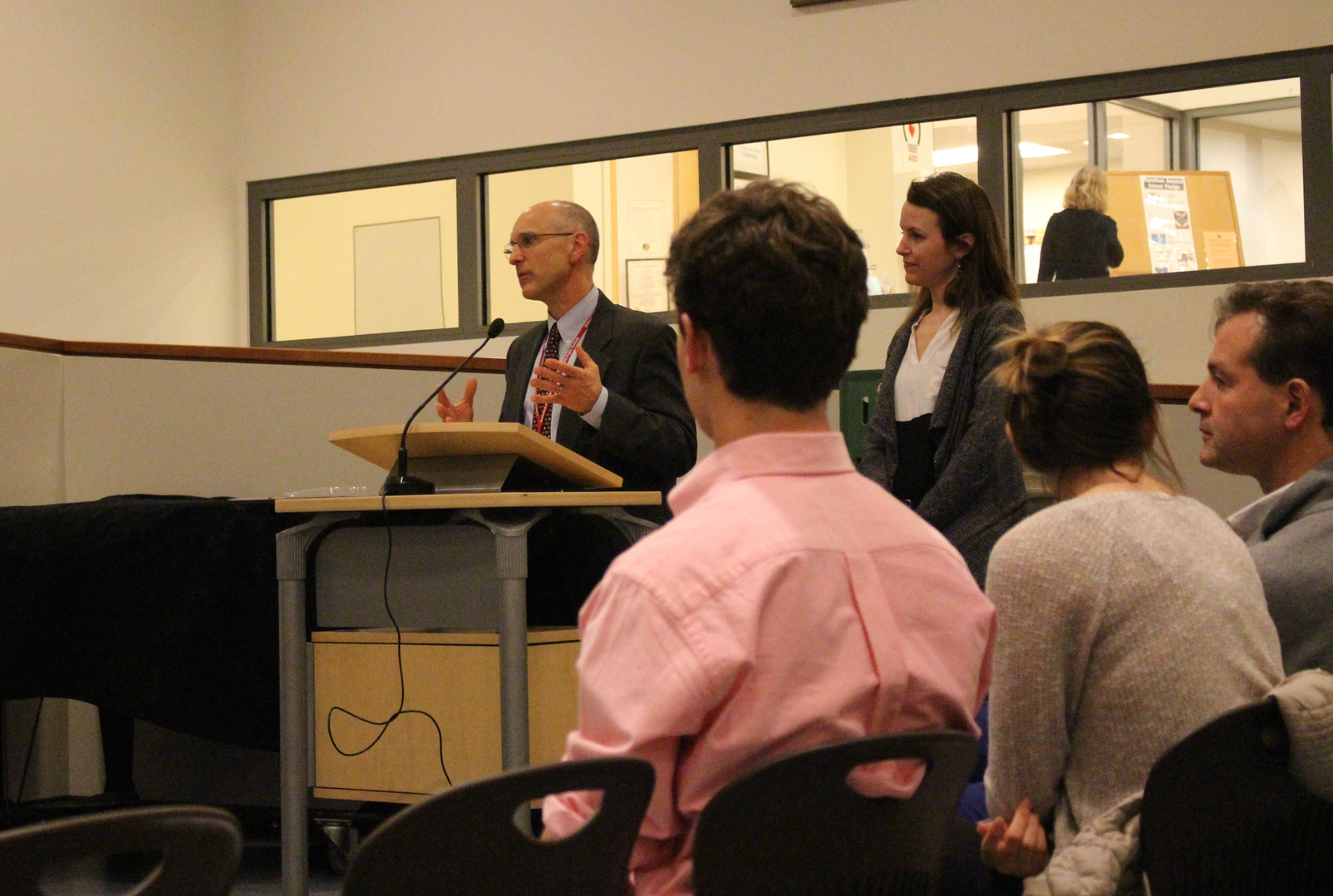 GHS Headmaster Chris Winters and addresses the Board of Education during their February meeting, held at Hamilton Avenue School. Feb. 25, 2016 credit: Leslie Yager

Though Dr. Goldin said a few students had transfered out of Inn Lab. “Overall, if there is one overarching theme, honestly I would say the reason is social pressure. The feeling was their crowd wasn’t there, and they weren’t sure who their crowd was going to be.”

Inn Lab student Pierce Ornstein said he hadn’t planned to enroll in Innovation Lab but had gone to an information session and left it completely convinced. He said that although he initially took some flack from his friends, he had no regrets.

Contrasting Innovation Lab to the traditional school setting, Pierce said his relationships with his teachers were extra strong.

“They’ve helped me develop ideas and habits to improve my time management,” he said, adding that the exhibition at Bruce Museum in particulate generated excitement, and that he enjoys having freshmen shadow him in the program.

“She feels incredibly supported. She is much more self confident and feels that her opinions and thoughts matter and that she is contributing every day in a meaningful way,” she said. “Long live Inn Lab!”

Rafa de la Sierra, father of Inn Lab student Sofi de la Sierra, said he believed his daughter has the best teachers in Greenwich. “What they’ve done in creating this curriculum is to foster environments where they can form relationships with their students,” he said. “I’m grateful to Greenwich Alliance for funding it, the Board to supporting it, to Dr. Winters for promoting it, but I’m most grateful for having not teachers, but educators educating Sofi.”

Inn Lab student Kathryn Papas said a pivotal moment in her deciding to join Inn Lab was when she watched Carol Dwyck’s growth mindset TED Talk. “By doing Innovation Lab I learned there is more than one way to learn, and that is perfectly okay. After Innovation Lab my head hurts because of all the thinking, planning and work that goes into the projects that we complete,” she said.

Kathryn said she changed her mindset about learning. When thinking about the word school she no longer associates it with stress, anxiety and endless piles of worksheets and homework. And while she had viewed science as a bit boring before, she said, “Now, during STEM class students are investigating parallel and series circuits and their different functions.” She said that later, students will work in a group to build a circuit that powers something to do a real-life task.

After several Inn Lab students and parents spoke of their great pride in the program and both Dr. Winters and Dr. Goldin fielded questions from board member Peter Sherr.

Though request to extend the pilot not require a vote, Mr. Sherr did ask some some tough questions.

Playing devil’s advocate, Sherr questioned the number of special education students in the mix, and asked and whether the “school-within-a-school” was succeeding in engaging students who, for example, might score high on the SAT but weren’t engaged in their classes.

“Will this help us lift up kids who don’t thrive in the traditional environment?” Mr. Sherr asked. “It looks like we only have that ‘choice’ part done.” 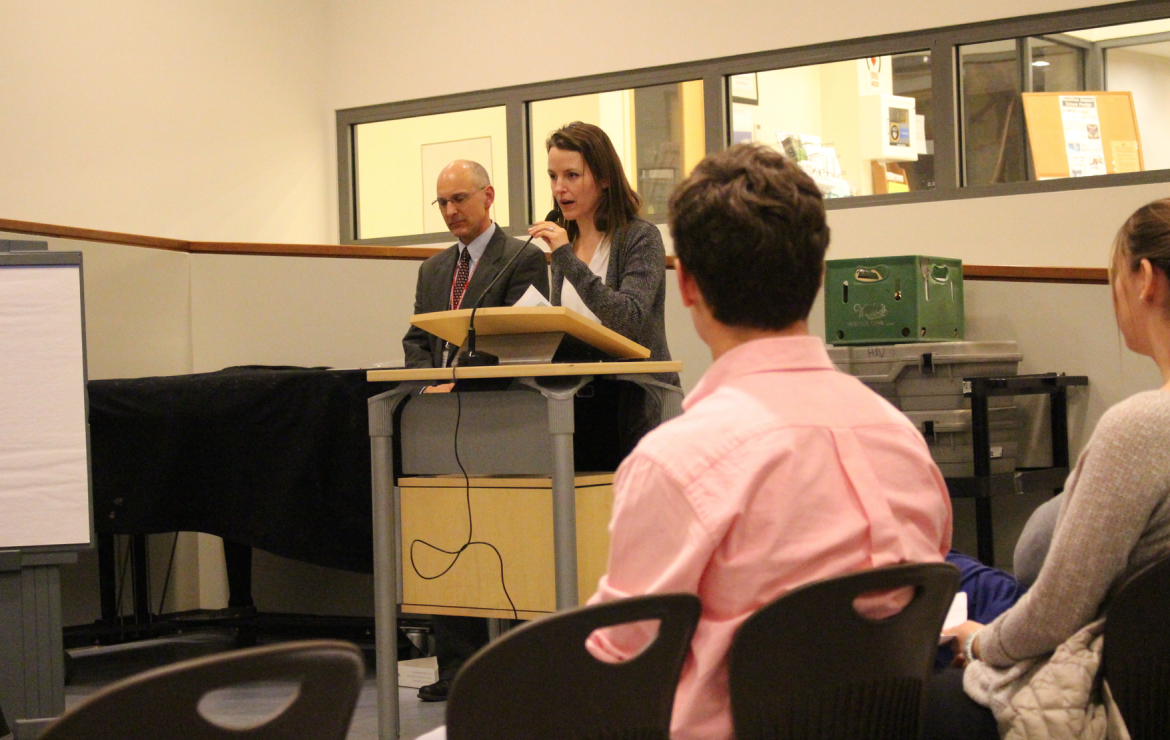 “The positive dynamics of the community are immediately apparent when you walk in,” Dr. Goldin said to the Board of Education, adding that through meaningful project work students are engaged in challenging content. Feb. 25, 2016 Credit: Leslie Yager

Dr. Goldin pointed out that with just 43 students, compared to 615 sophomores in the class of 2018, every addition or decrease of a single student in a category skews the comparison.

However, she said are indeed a number of special education students in the  program who are demonstrating that that partnership works well.

“We have consistently communicated to parents and to the resource room staff that we welcome special education students,” Goldin said. “We have a good relationship with resource room teachers and other support staff, like school psychologists, to help support those students.”

Sherr’s next question was about targeting students who don’t thrive in the traditional education model. “Early on there was a lot of discussion of ‘What problem does this solve?’ ‘Who isn’t served?’ and ‘Who is this targeting?’ We wanted to invest in Inn Lab to fix the challenge to kids who may not be engaged, or not succeeding in the traditional model.”

“Our intent was always to make it an option for all students – to offer a project-based learning,” Goldin said. “It is something that could be for anyone, but might not be for everyone.”

Having passed the half way point in its inaugural year, with an enrollment of 43 students sophomores, Dr. Sarah Goldin said the group’s demographics align with the GHS sophomore class as a whole, and that all students are welcome.

Mr. Sherr also wondered whether the small class size in Inn Lab is causing other classes in GHS at large to be bigger.

Dr. Winters said that indeed, he hoped more students would enroll next year. But, he acknowledged, “It’ll be a challenge until these guys go off to college. These students are our ambassadors,” he said. “College acceptance is a big piece.”

After Dr. Winters, Dr. Goldin and several students as well as parents from the Inn Lab program all spoke of their great pride and satisfaction with the program thus far, superintendent Dr. McKersie shared his thoughts.

“We have stumbled into a moment of brilliance,” Dr. McKersie said. He described Innovation Lab as a potential “engine” for the entire school, and said it would be important to structure time for other teachers to come and observe it.

Meet the GHS Innovation Lab Team. Putting the Passion and Play Back into Learning.