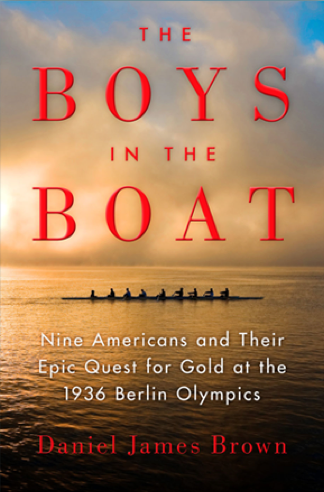 Next big pick for Greenwich Reads Together? This year the entire community is invited to read The Boys in the Boat: Nine Americans and Their Epic Quest for Gold at the 1936 Berlin Olympics by Daniel James Brown.

“The Boys in the Boat has personal meaning for me, as both my father and brother were serious rowers,” said Greenwich Schools Superintendent McKersie. “…Rowing is a perfect sport (and metaphor) for being a small, yet essential, part of something much bigger than oneself.”

GHS Programs for Greenwich Reads Together:

The highlight of the schools’ participation in GRT will be a talk given by The Boys in the Boat author Daniel James Brown in the Greenwich High School auditorium on Tuesday, October 28 and attended by students from Greenwich’s public and independent middle and high schools.

“GHS is very excited that Daniel James Brown will be speaking with our students,” Winters said. “The author’s presence on campus provides a unique opportunity for students deepen their understanding of the heroic accomplishments of the 1936 U.S. Olympic Crew Team and to see that feat as inspiration for their own lives.”

On Friday, October 24, Dr. McKersie will co-lead a book discussion on The Boys in the Boat for Board of Education and Town Hall employees with Greenwich Pen Women member Marcia Clay Hamilton.

GHS will hold its annual Greenwich Reads Together Discussion Day on Tuesday, October 28 and offer a series of related programs for faculty and students.

On Tuesday, October 28, at 2:30 p.m., GHS Headmaster Chris Winters will lead a book discussion on The Boys in the Boat in the Media Center for faculty, staff, and retired faculty.

On Tuesday, October 28, at 2:30 p.m., the GHS student book club Cover to Cover will discuss The Boys in the Boat in the Media Center. Cover to Cover will also hold a children’s book drive at GHS through October 17 as part of the Greenwich Alliance for Education’s 2014 GRT Book Drive. Donated books will be distributed to children at the Greenwich Boys & Girls Club on Wednesday, October 22.

Numerous Social Studies and English teachers have created curriculum units concerning the historical events and themes raised in The Boys in the Boat and Outcasts United, or have encouraged their students to read the book independently.

• CMS will hold a book discussion and international dessert sampling program for students, parents, and faculty on Tuesday, October 21 from 6:00 – 8:00 p.m.

• In addition, CMS will hold a sports equipment drive from October 13 through 21 and request new or gently used sports equipment be dropped off at the school for donation to a local community organization for after-school programs.

• Seventh grade students will participate in a two-day writing workshop with Fairfield University Professor and Connecticut Writing Workshop Director, Dr. Bryan Crandall, who will focus on working with the students on Outcasts United and crafting essays for submission to the GRT Essay Contest.

• Students in all grades have had booktalks in Language Arts classes for all three books and have the option to read any of the three.

• During selected Advisor Base periods prior to the breakfast, Media Specialist Karen Ball will be hosting read-alouds in the EMS Media Center of several of the racing sections of Boys in The Boat, and sections of Outcasts United.

• EMS students are involved in Advisor Base activities related to the discussion themes raised by the GRT books.

• WMS eighth graders will read Outcasts United in reading classes and discuss its themes with faculty and parents.

• From October 23 to 25, sixth through eighth graders will create a “How Can One Person Make a Difference?” banner in the WMS cafeteria. The banner will include images, influential quotations, and students’ own stories about how they make a difference in their community.

• Glenville will conduct an all school read aloud of Wilma Unlimited and discuss the book using thinking routines from the book Making Thinking Visible such as Headlines, Chalk Talk, Step Inside, and I Used to Think…, Now I Think….

• Grade K-2 students will use KidPix or Educreations to share their thinking about Wilma Rudolph’s life.

The International School at Dundee:

• Wilma Unlimited author Kathleen Krull will Skype with ISD fourth graders in connection with their Risktakers Unit on Wednesday, October 22.

• Grades 3 through 5 will read aloud and discuss Wilma Unlimited during the third week of October.

• Fifth graders will participate in a Google Hangout book talk session on October 29 with fifth graders from New Lebanon School.

• Grades 3 through 5 will read aloud and discuss Wilma Unlimited during the third week of October.

• Fifth graders will participate in a Skype session with Wilma Unlimited author Kathleen Krull on October 21.

• Fifth graders will participate in a Skype session with Wilma Unlimited author Kathleen Krull on October 22.

• Fifth graders will discuss A Strong Right Arm during a book group and baseball-themed lunch.

• Grades 3 and 4 will conduct read alouds with Wilma Unlimited and write “headlines”, an activity from the book Making Thinking Visible.

• Grades 1 through 4 will read and discuss Wilma Unlimited in class.

• Grades 3 and 4 will read A Strong Right Arm as a read aloud and watch video interviews of Ms. Johnson. Parents have been invited to help facilitate discussions of the book and students will also share their impressions of the book on the North Street School GRT Blog.

• Students will read Outcasts United in groups in e-book and print versions, watch CBS and CNN videos about how the Fugee Soccer Team was formed in Clarkstown, Georgia, and discuss the concepts of perseverance and courage in groups and online via the North Street School GRT Blog.

• A Book Club luncheon to discuss Wilma Unlimited was held on September 29 and October 1 for interested fourth graders.

• A Book Club luncheon to discuss A Strong Right Arm will be held on October 20 through 24 for interested fifth graders.

• Grades 3 through 5 will read aloud and discuss Wilma Unlimited. Fifth grade will extend the discussion online through Schoology.

• Interested fourth and fifth grade students will read Wilma Unlimited and participate in a book discussion around the themes raised therein.

About The Boys and the Boat and Daniel James Brown

The Boys in the Boat celebrates the 1936 U.S. Olympic eight-oar rowing team – nine working class boys who stormed the rowing world, transformed the sport, and galvanized the attention of millions of Americans.

Against the grim backdrop of the Great Depression, these young men reaffirmed the American notion that merit, in the end, outweighs birthright. They vanquished the sons of bankers and senators rowing for elite eastern universities. They defeated the sons of British aristocrats rowing for Oxford and Cambridge. They reminded the country of what can be done when everyone quite literally pulls together.

Drawing on the boys’ own diaries and journals, their photos and memories of a once-in-a-lifetime shared dream, The Boys in the Boat is a portrait of an era, a celebration of a historic achievement, and a chronicle of one extraordinary young man’s personal quest.

Daniel James Brown is the author of two previous non-fiction books and was a finalist for the B&N Discover Award for Under a Flaming Sky. The Boys in the Boat has been on bestseller lists across the country, including the New York Times, the Los Angeles Times, and NPR. Brown has taught writing at San Jose State University and Stanford. He lives near Seattle.