“Today is the culmination of an effort that started a long time ago,” said Greenwich Police Chief Heavey at Wednesday morning’s swearing in of Shane Geary and Matthew Swift. 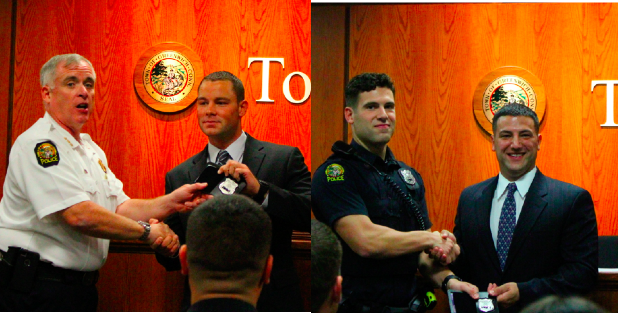 (Left) Shane Geary of Norwalk received his credentials from Chief Heavey. Matt Swift’s brother David is also a Greenwich Police officer and had the honor of presenting credentials to his newly sworn in brother. (Right) Credit: Leslie Yager

Chief Heavey said the new officers endured a process that included several hurdles including written tests, physical agility test, psychological tests, polygraph, physicals, interviews, and extensive background checks. “So we know everything we need to know and some stuff we don’t want to know,” he joked. 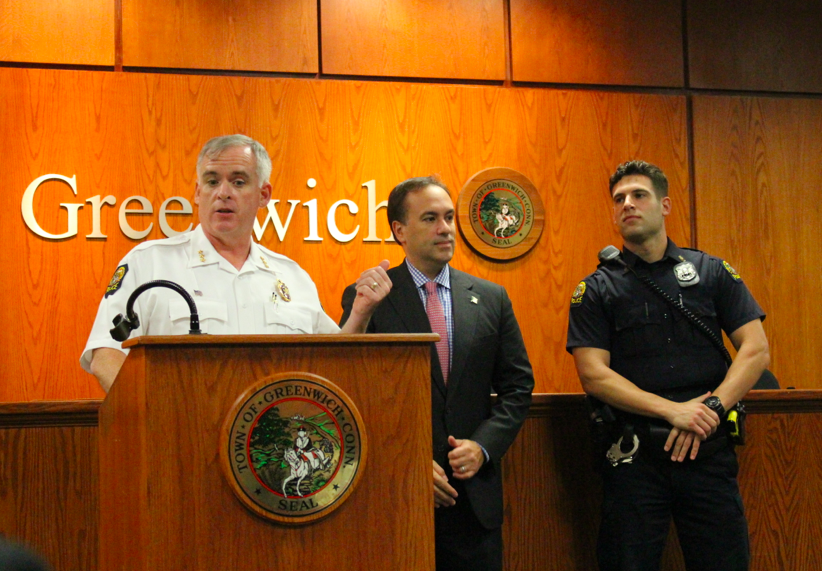 Heavey explained that in Greenwich police ride in one-man cars.

“You can say we ride alone, but we don’t for a number of reasons. Officers are part of a big family. You’re not riding alone, because you have the support of your family and friends.”

The Police Chief added that in the past he had sworn in five or six officers at a time and not drawn a crowd as large as the one that turned out on Wednesday, filling the Town Hall meeting room. 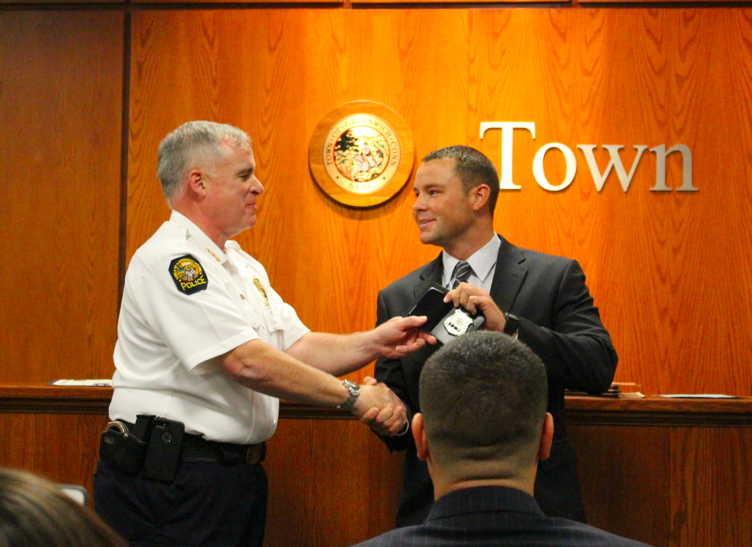 In Greenwich the Police Commissioner is First Seletman Peter Tesei, who said, “There is no more important service that this community provides through its municipal government and tax payers than life safety services, police protection, fire protection and EMS.”

Tesei warned that it is important not to take these services for granted. “Living in the world today, with instability and issues that have emerged is a reminder of how important it is to have a fully trained and equipped and staffed local police department.”

Matthew Swift resides in Old Greenwich and graduated from Greenwich High School. He is currently attending Norwalk Community College and is pursuing a degree in Criminal Justice. Prior to becoming a police officer, he worked at Round Hill Service Station doing minor automobile repair and towing. He has worked there for the past 13 years.

Swift holds a CT Boating Safety Certificate. His brother David is also a police officer with the Town of Greenwich and his mother Phyllis is an administrative assistant at Western Middle School.

Shane Geary resides in Norwalk. He attended Brien McMahon High School and Norwalk Community College where he obtained an Associate’s Degree in Criminal Justice. Prior to becoming a police officer, Geary worked at Integrated Security Services., as the Operations Manager of Connecticut. He holds boating and SCUBA certifications, plus motorcycle and firearms licenses. He also holds a security and investigator license.