On Monday, June 6, Greenwich Police Lt. Kraig Gray confirmed that his department continues to look for a Range Rover stolen last Friday during the bizarre series of events that began when Greenwich Police on patrol in Bruce Park spotted an Audi driving with its lights off at 3:30am.

The car turned out to have been stolen, and the driver, who had a passenger in the car, engaged police in pursuit. After the suspected car thieves crashed the stolen Audi A4 on Museum Drive, and fled on foot, one suspect was apprehended.

The other suspect eluded police after entering I95 in a car stolen from a driveway on Oneida Drive, where it had been left with its keys and remote control to open the gates in that private community.

Police continue to search for the second suspect and the gray 2011 Range Rover stolen from Oneida Drive. 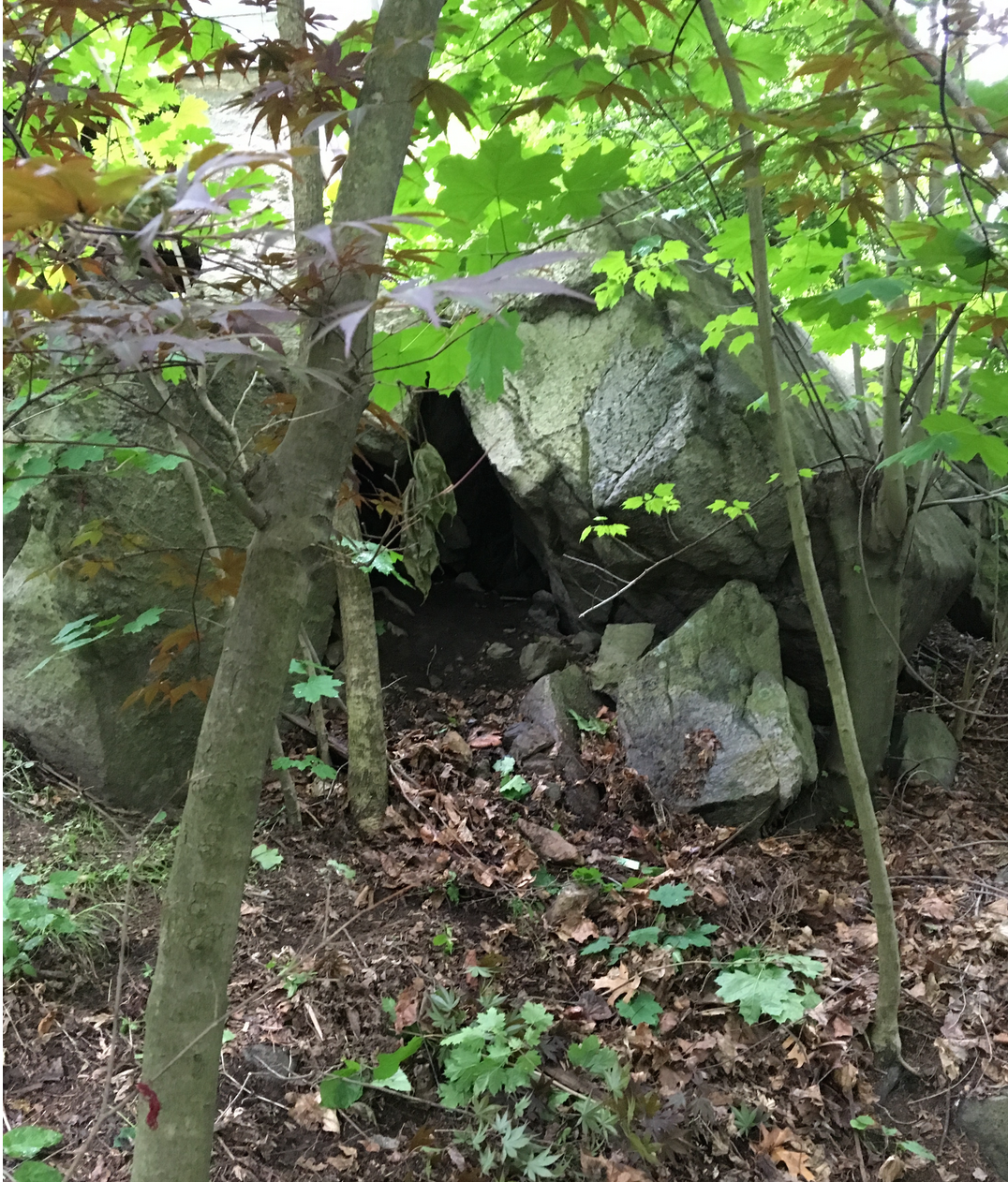 At approximately 3:30 am on June 3, 2016, a Greenwich Police Officer was on patrol on Hamilton Ave when he observed a 2014 Audi A4 traveling without their headlights illuminated. The driver immediately engaged the officer in pursuit.  Unbeknownst to the officer at the time, the car was reported as stolen about a week ago from Stamford’s jurisdiction.  The stolen Audi quickly lost the first pursuing police officer.

As other officers began to cordon off  the most likely avenues of escape, the vehicle was spotted again by a second GPD officer in Cos Cob.  As the suspect was exiting I-95,  the stolen vehicle sideswiped a police unit and again eluded that officer. The officer was not injured in the collision.

The vehicle was observed a short distance away by a third  GPD officer back in central Greenwich. The operator of the Stolen Audi A4 turned off its headlight and sped away.  The officer followed behind when he found the vehicle crashed on Museum Drive at Indian Harbor Drive with at least two suspects fleeing on foot.   A fourth officer suffered a minor injury to his lower leg most likely a pulled muscle or strain during the foot chase.

While other officers were setting a perimeter and continuing to search for the suspects, a resident reported the theft of their car (Range Rover keys within) from the vicinity of the search area.   A fifth Greenwich Police Officer spotted the stolen vehicle as it entered I-95 Northbound.  The operator of the stolen Range Rover immediately engaged that officer in pursuit northbound. The pursuing officer again broke off the chase due to congested roadway conditions and reckless operation by the suspect clearly creating a hazardous situation for the community.

Officers of the Greenwich Police Department continued to search on foot within the established perimeter calling in additional resources, which included GPD’s K-9 unit and Fairfield PD’s K-9 unit and a Trooper from Troop G.

As dawn approached, a resident observed a disheveled young male talking on a cell phone next to his house.  The resident called Police Dispatch regarding the suspicious person, and several officers flooded the area.  The suspect was located secreted within a rock outcropping and was taken into custody without incident. The suspect was transported to the hospital as a precaution based on the severity of the accident. The suspect was seen and released without injury.

The suspect is 17-year-old male Stamford resident and is being charged as a juvenile.  The male suspect has been charged with Larceny 1st (by possession)§ 53a-122, Criminal Trover in the Second Degree  § 53a-126b, Interfering with an Officer — § 53a-167a. 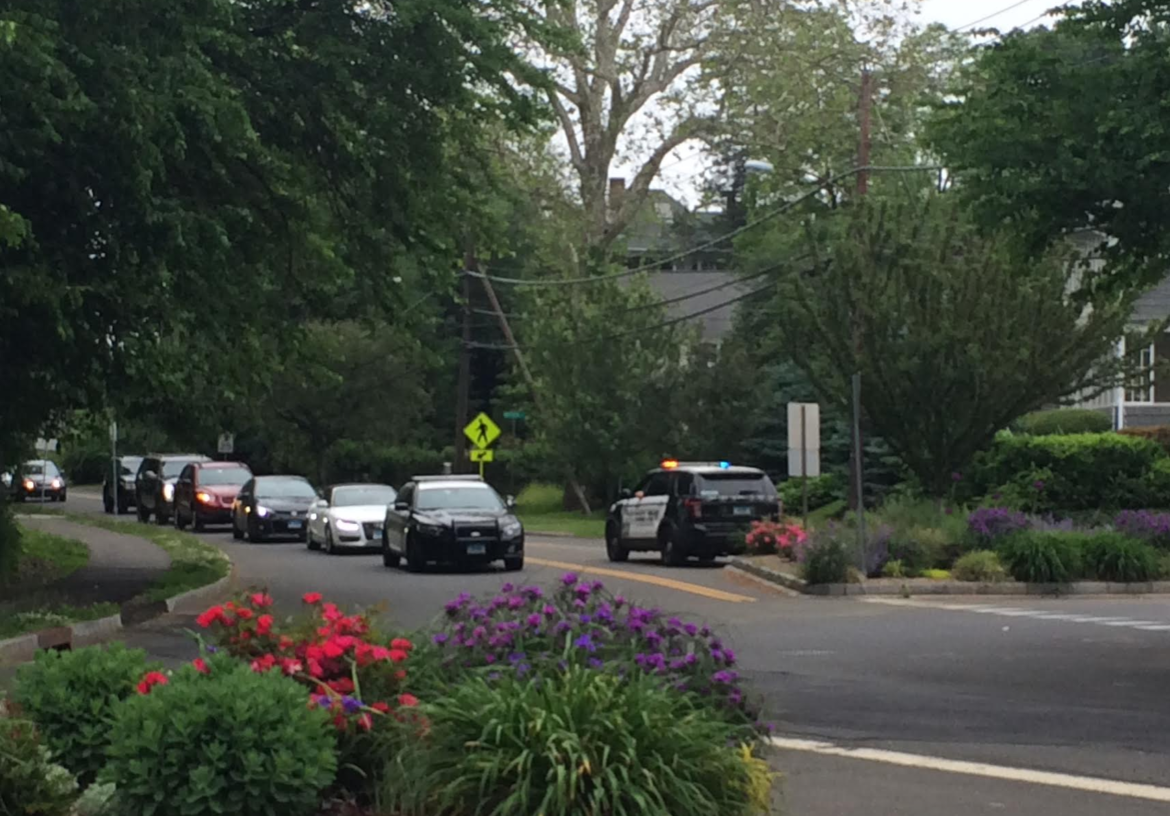 Greenwich Police at the intersection of Bruce Park Drive and Davis Ave, June 3, around 8:40am. Credit: Leslie Yager

No further suspects are believed to be in the area. More information regarding the case will be released after the details have been reviewed.

Original Story: 7:50am Friday, June 3, 2016 At approximately 3:30 am on Friday morning, June 3, a Greenwich Police Officer was on patrol on Hamilton Ave when he observed a vehicle traveling with no lights.

According to Greenwich Police Lt. Kraig Gray, the vehicle had been reported as stolen about week ago from Stamford’s jurisdiction.  The operator of the vehicle engaged the officer in pursuit and drove away at a high rate of speed.

After the operator crashed the car, two suspects fled on foot and have evaded apprehension.

Shortly after the suspects fled, a local resident reported the theft of their car within the vicinity of the search area.  As officers were responding to that theft, they spotted the second suspect still on foot fleeing the area.

As of 7:30am officers continue searching for the suspect in the area of Davis Ave.  The suspect is described as a male of average build, dark complexion, wearing a light colored sweatshirt.  If  anyone sees the suspect  dial 911 and notify dispatch.