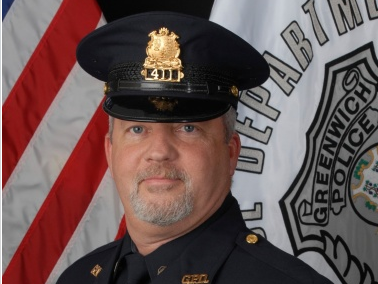 Chief of Police James Heavey has announced the retirement of Detective Timothy Biggs, who has completed 27 years of service with the Greenwich Police Department.

Detective Biggs, a Greenwich native, was sworn in as a Greenwich Police Officer in February of 1986 and would graduate from the 194th session of the Connecticut Municipal Police Basic Police Academy. In 1997 he was promoted to Accident Car Investigator (Master Police Officer) and promoted again in 2002 to Detective. Detective Biggs was also a long serving member of the Departments Special Response Unit (SRU).

During Tim’s early career he distinguished himself by expertly solving many dynamic situations that required a quick and measured response. His success on the road as a patrol officer resulted in a new assignment where for the last 12 years Detective Biggs has been assigned to the Criminal Investigations Section of the Detective Division.

Detective Biggs file contains numerous departmental commendations for excellent police work and actions exemplifying the best tradition of police service. These commendations span his career from Patrol Officer to Accident Car to Detective. Detective Biggs Commendation’s are representative of the full range of crime in Greenwich. He has received Chief Commendations for investigations and apprehensions for: Serious Accident Investigations, Auto Theft, Burglaries, Car Jacking’s, Financial Frauds, Homicides, Kidnapping, Auto and Foot Pursuits, Robberies and not to mention his life saving efforts on medical calls and his professional conduct during security details for Presidential visits and other dignitaries.

His outstanding investigative abilities resulted in his being recognized as the Officer of the Month in January 2011. Detective Biggs efforts were always instrumental to the successful conclusion in so many investigations. Detective Biggs and his partners conducted a 12 month investigation into eleven Greenwich burglaries that would

ultimately result in the arrest of two career criminals and the recovery of thousands upon thousands of dollars’ worth of stolen property.

Detective Biggs file similarly contains numerous letters of appreciation from local citizens. They all recount his professionalism and compassion. Of special note is the letter detailing his act of genuine charity and humanity when he spearheaded to get a destitute and mentally challenged man home to Pennsylvania. He would have to coordinate and cajole many different institutions and a bus company to accomplish the task.

“Tim’s accomplishments are indicative of a highly accomplished and professional police officer who has positively affected so many of our citizens. We are fortunate that Tim will continue to share his institutional knowledge in retirement. Detective Biggs will continue to serve the Town of Greenwich as a volunteer Special Police Officer. I am very proud to have served with Tim and wish him the best in the next stage of his life.”