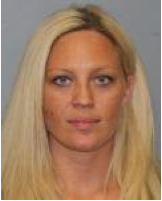 Brooke B. Wilson, 30 years old, of Cos Cob has been charged by New York State Police Bureau of Criminal Investigation from the Poughkeepsie barracks with Criminal Possession of a Controlled Substance 5th Degree, a Class D Felony, and Unlawful Possession of Marijuana, a Violation.

On On Nov. 23, 2014 at approximately 10:40 a.m., New York State Police Troopers initiated a traffic stop on the vehicle Wilson was operating on the Taconic State Parkway for speeding.

While interviewing the operator, identified as Wilson, it was discovered that her New York driving privileges were suspended.  Further investigation revealed that Wilson was found to possess PCP and Marijuana.