I have seen some beautiful stages and sets in my lifetime, but nothing compares to the impact that MISA will have on the music and theater program at Greenwich High School. The new auditorium, which makes great use of its grand space, capitalizes in particular on its height. Specifically, the distance from stage to the back row is short, but the seating capacity stacks up quickly with a combination of orchestra, mezzanine and balcony. 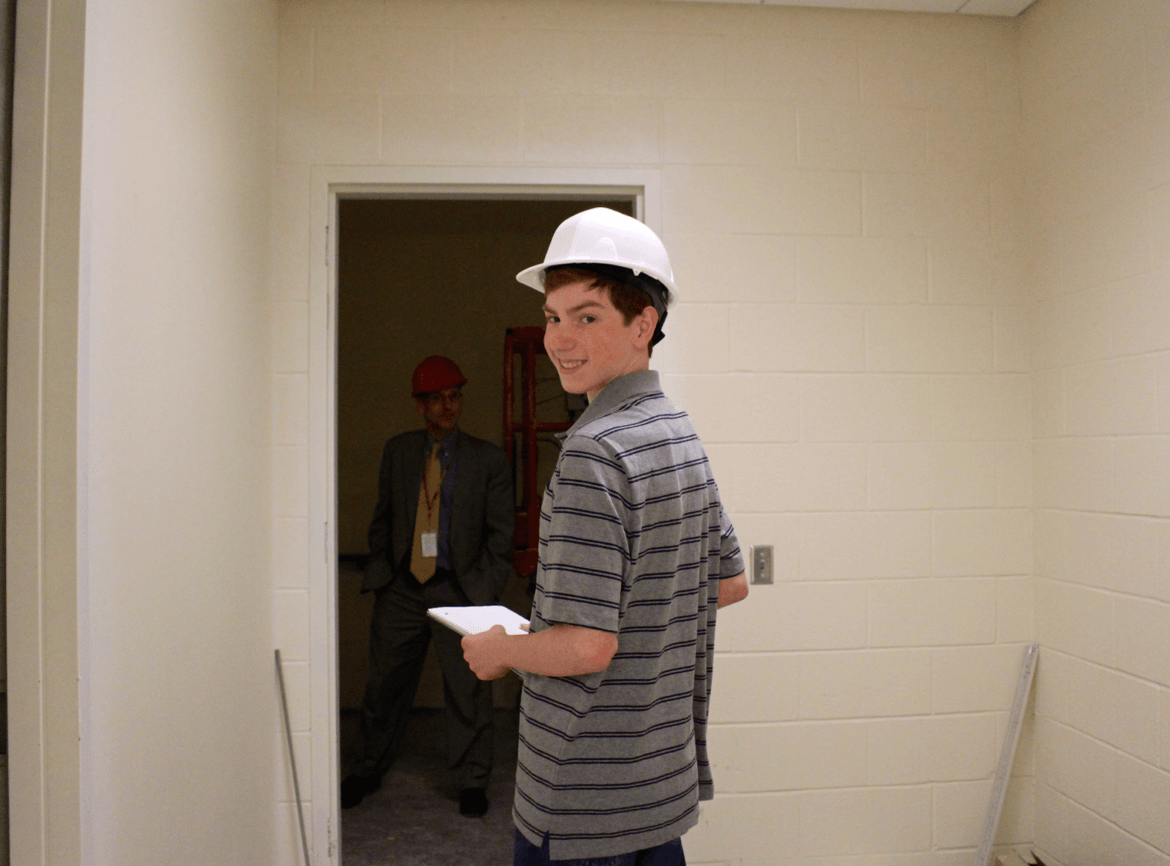 Sadly, GHS students, families, and especially the class of 2015 will have to say goodbye to the old auditorium, attending end-of-year performances and award ceremonies in what we already call “the old auditorium.” In fact, the farewell will be literal, as the dated 1970 auditorium is set to be demolished over the summer. 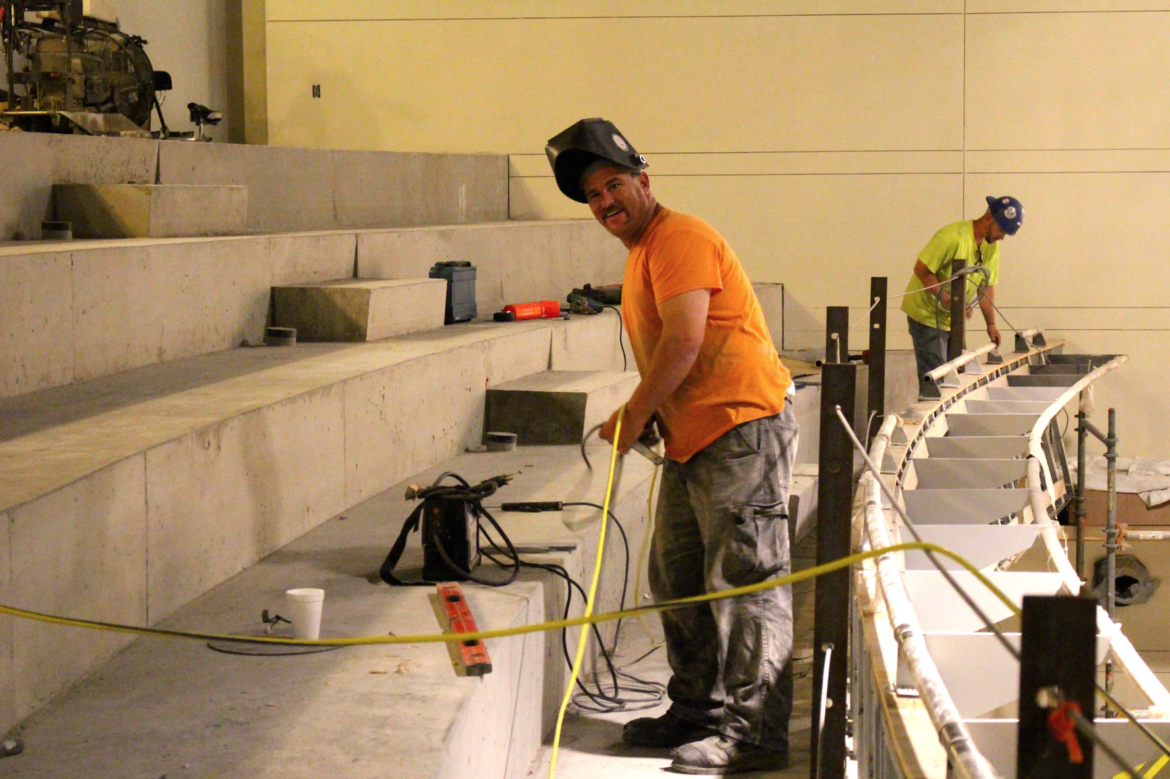 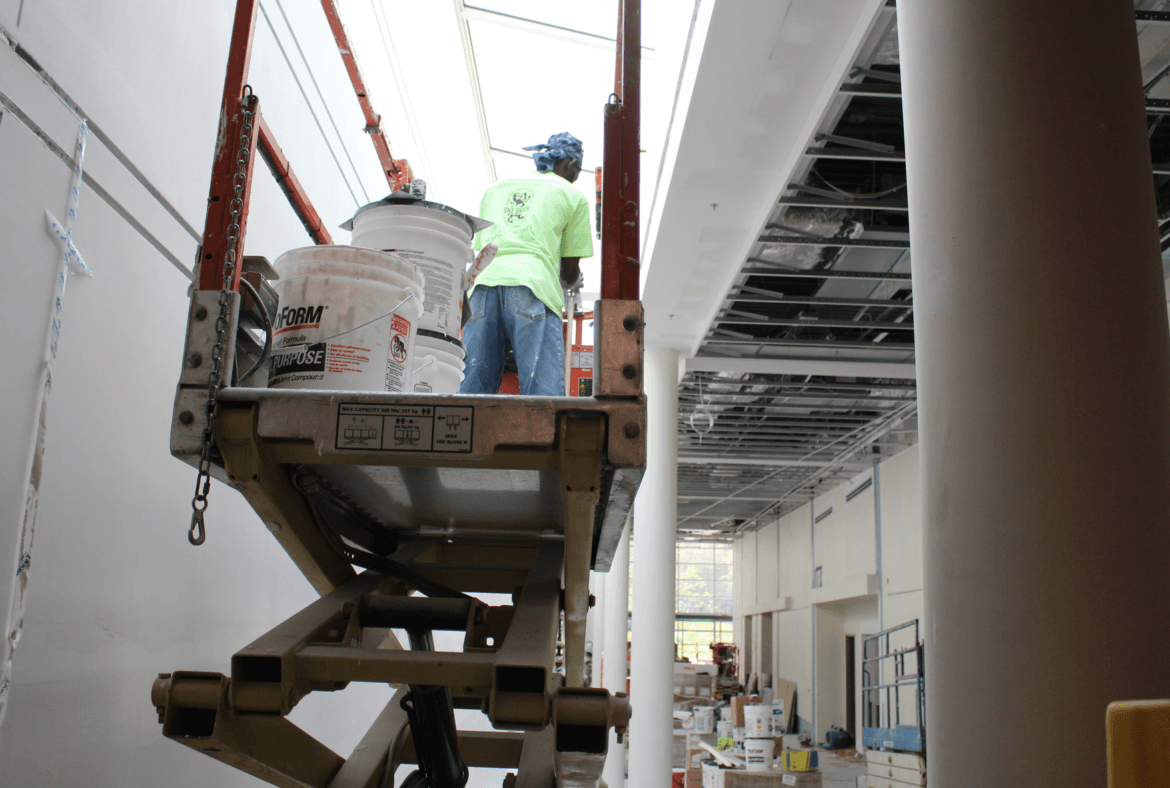 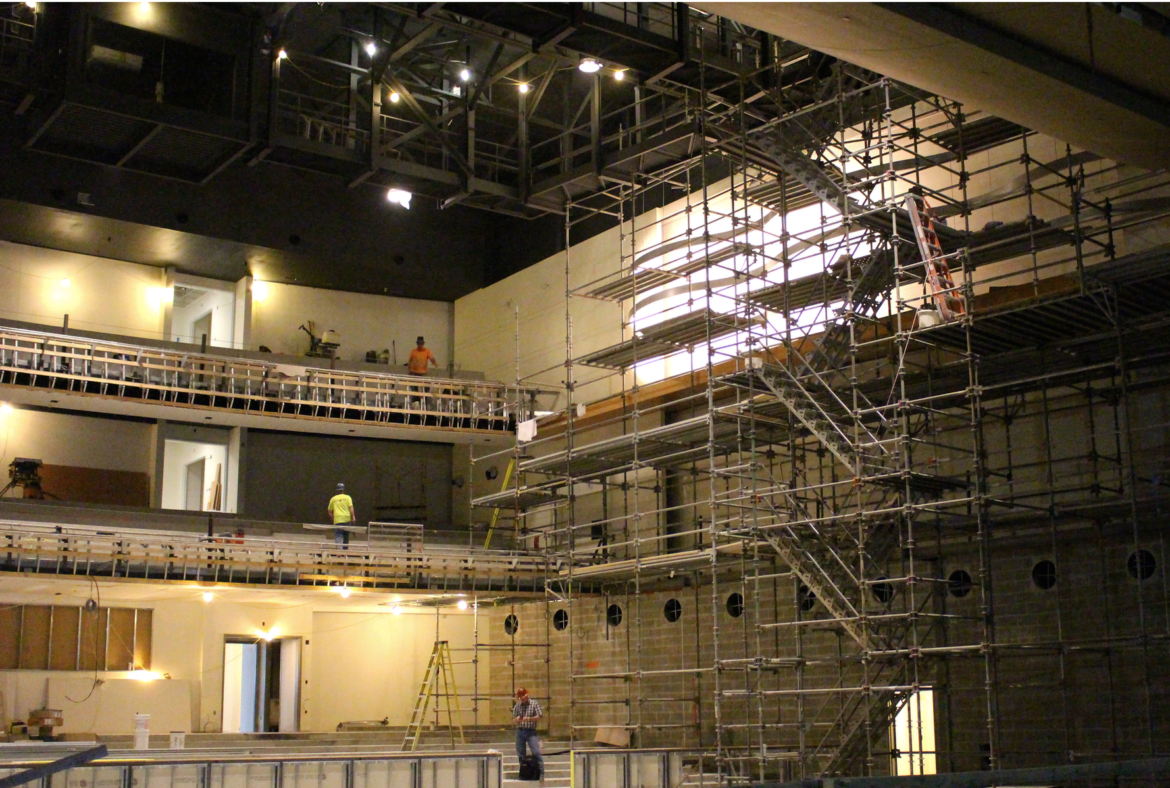 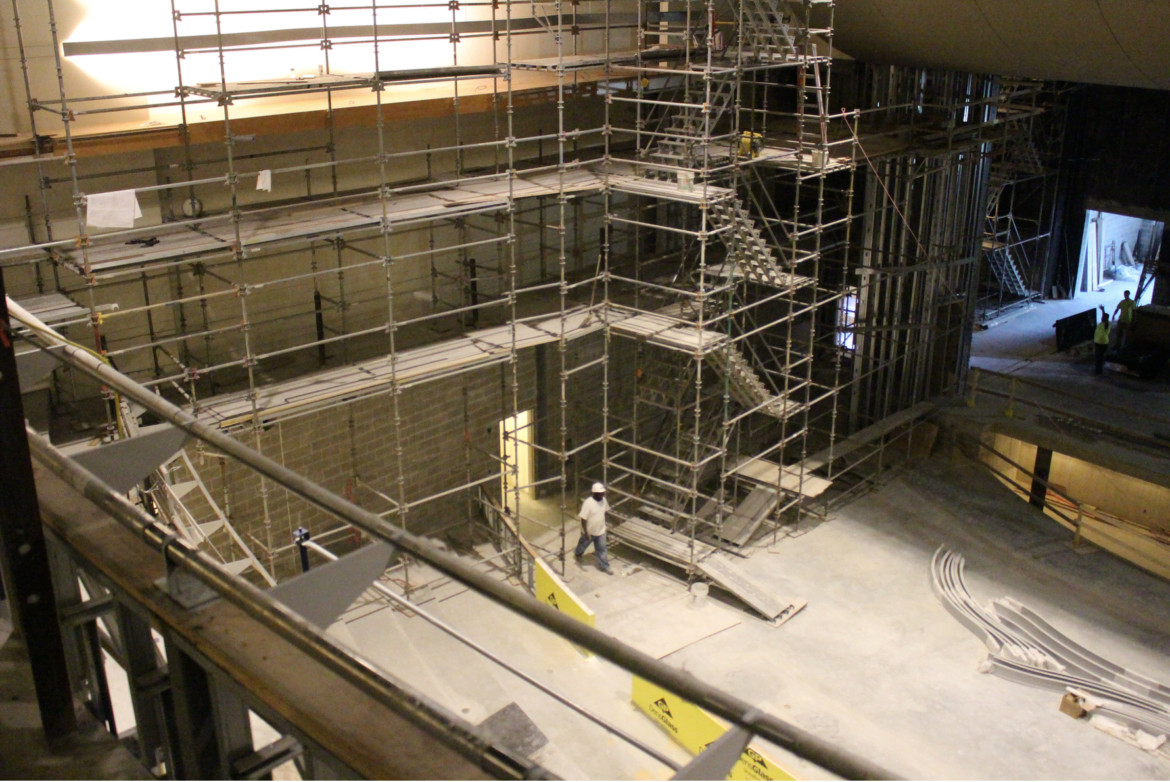 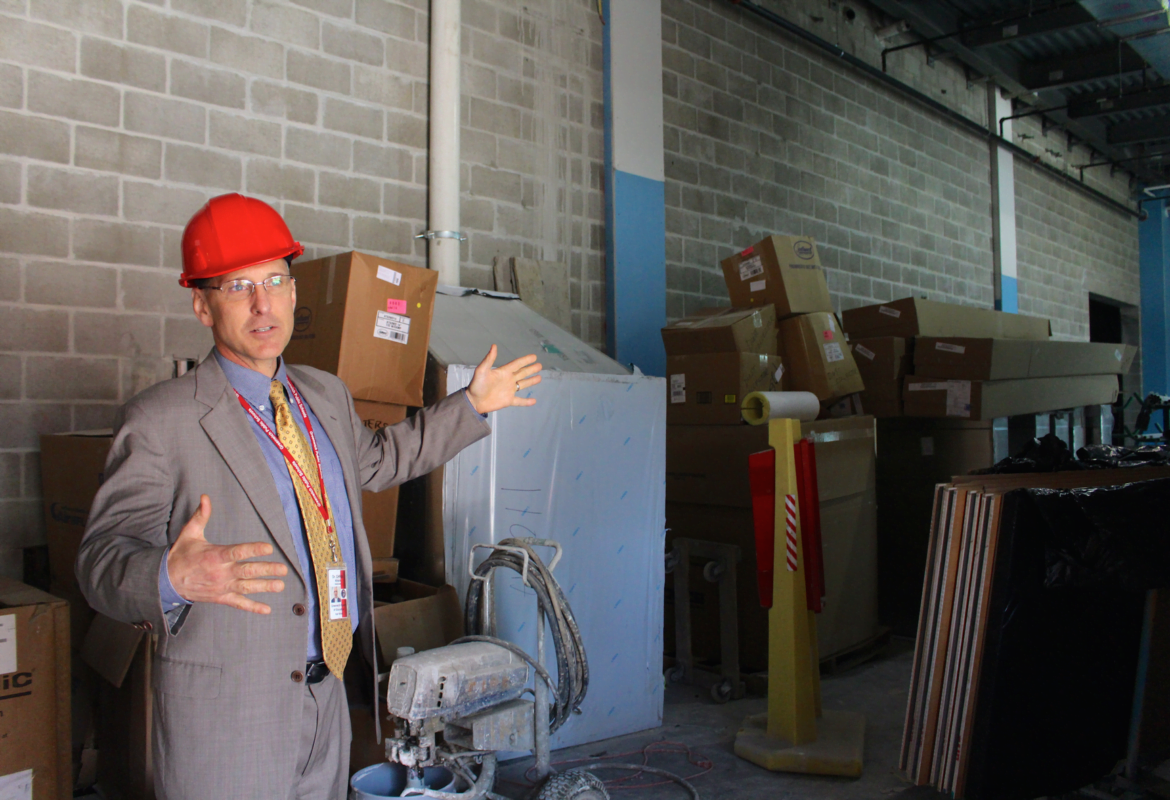 The class of 2015 will be the last class to have performed SRO in the old auditorium, the last of fans to buy a ticket to the spring musical there, and the last to attend the GSA scholarship awards event there.

The new auditorium has a seating capacity of 1,235. Dr. Winters said, for example, that it will be possible to accommodate two grades at a time for orientation in the beginning of the school year. The “old auditorium” seats just 850. 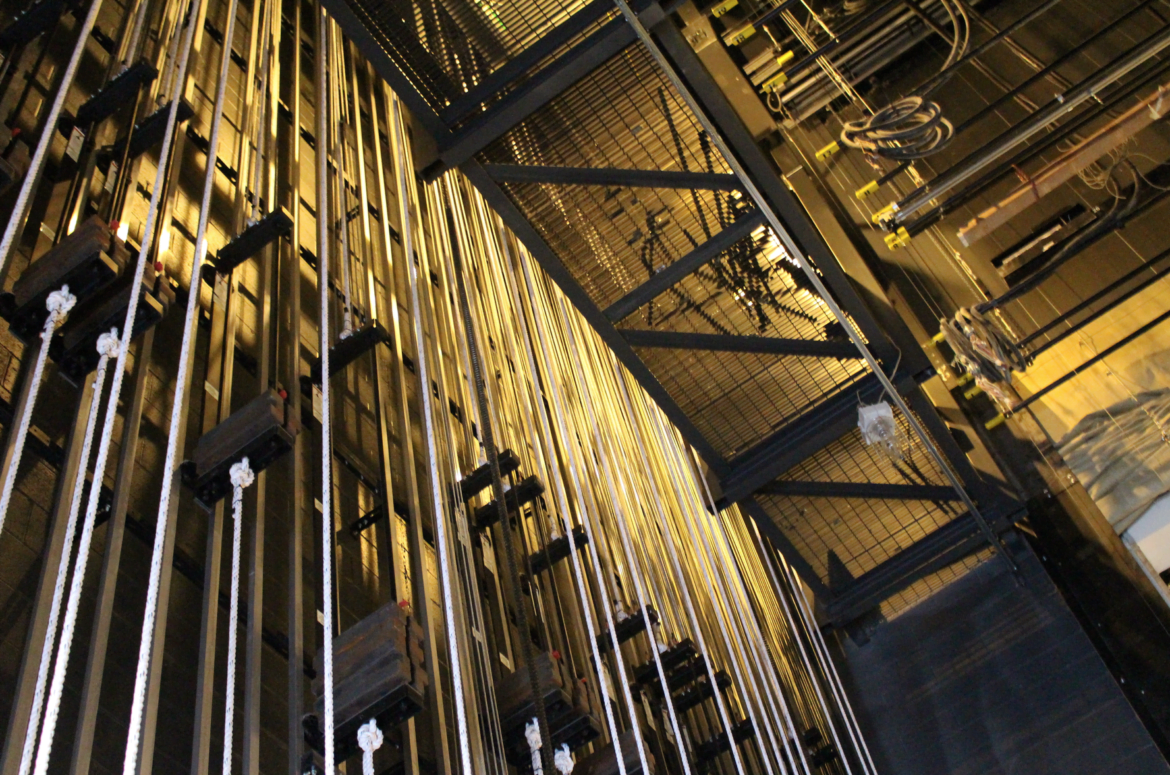 “At some point the students will stop calling this the ‘new’ auditorium,” Dr. Winters said.

The plans for the current auditorium are simple: demolition. Everything will be taken down and current rooms (such as choral rooms, orchestra rooms, and band rooms) will be renovated and converted into one space. The band room will become the new choral space. 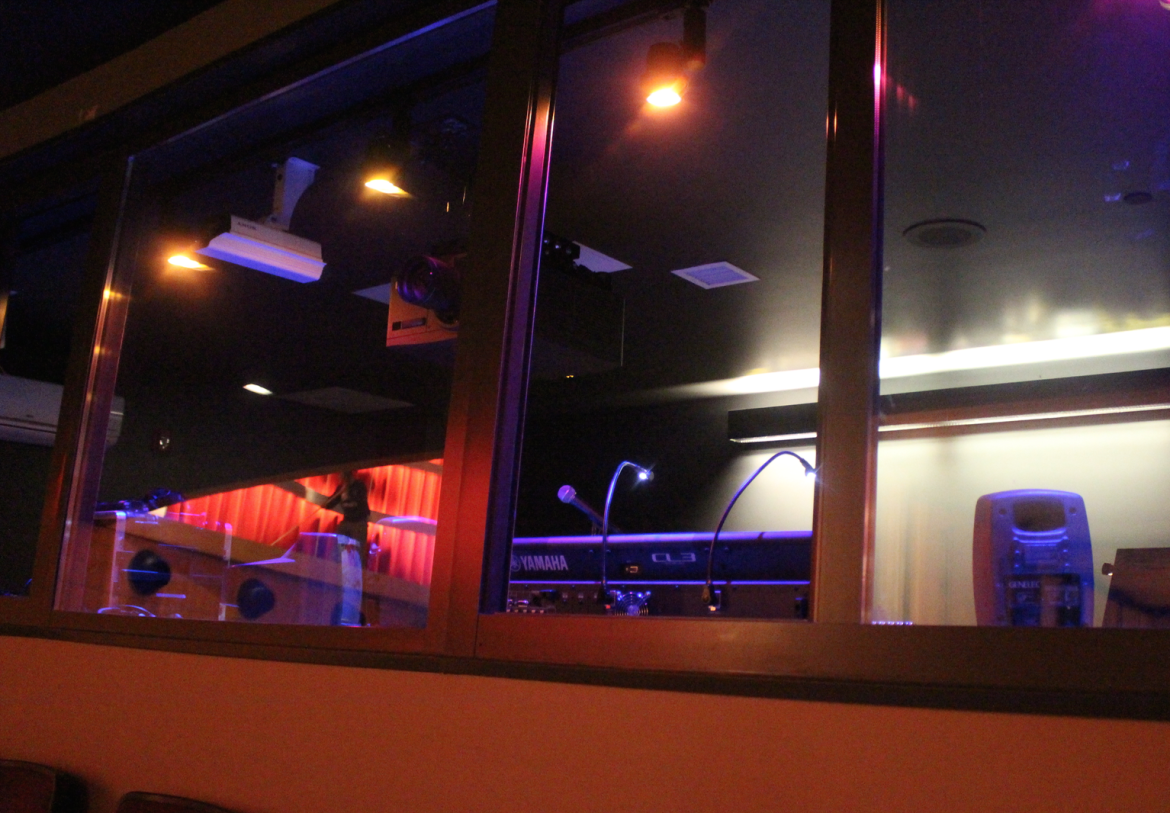 Sound booth at the back of the performing arts center. Credit: Leslie Yager

Dr. Winters was kind enough to show us a good chunk of what’s being kept under wraps, including a set design room where Scott Borowka will no doubt create sets with his theater tech students. Dr. Winters also pointed out the mechanical orchestra pit that elevates to stage level, a “green room,” which will also serve as a chorus classroom, prop storage room, and orchestra practice space.

Dr. Winters said he had been impressed with the tremendous cooperation and sacrifice among music staff. “Next year the music staff are willing to pack into small spaces wile their instructional space is under construction,” the headmaster said. “They have been incredibly patient.”

While the auditorium itself is breathtaking, the vast glass foyer will feature a galleria for student artwork. Even the men’s and women’s bathrooms are spacious. “Every woman knows theaters always have a line for the women’s room at intermission,” Dr. Winters said, as he pointed out the generously spacious women’s rest rooms.

Toward the end of our tour, there was a quiz. Dr. Winters asked what was beyond the giant wall. We guessed wrong. The answer was the gymnasium. Near the elevators is a coat check and ticket room.

You have to be there to experience the awe, radiance, and hard-work that went into this project. While on the tour, we joked about how many times we said “wow.” It’s a challenge to come up with enough superlatives to describe walking into the auditorium for the first time.

With its skylights and wall of glass at the entrance, the foyer itself is almost as awe-inspiring as the auditorium.

Dr. Winters, who said he loved watching the construction progress, said that once the auditorium is complete, Greenwich High School will have priority for its use, but it will serve as a cultural center for the whole town.

The entire GHS campus will be shut down over the summer for work to complete the MISA project, but in the fall the completed auditorium and instructional space will be ready for its debut.