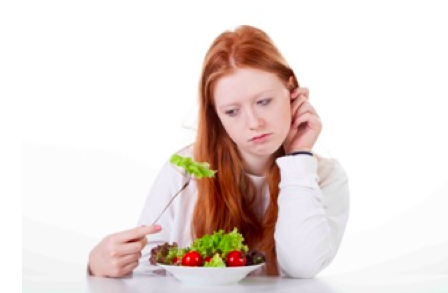 Eating disorders are not a fad, new diet, lifestyle choice, bad habit or even a “problem” that a person can “outgrow.” Eating disorders are a are a complex psychiatric illness. We must eat to live, yet 24 million people in the US of all ages and genders struggle with anorexia, bulimia or binge eating disorder and do not have a healthy relationship with food. Eating disorders have the highest mortality rate of any mental illness.

Early intervention matters
Eating disorders have heartbreaking consequences, but they don’t have to. The right intervention strategies can improve the quality of life—even save a life. I like to use an analogy of a marble rolling down a hill of sand to illustrate the effectiveness of early intervention.

If a marble is at the top of hill, it will roll down whatever path it is pushed. Once a groove is made, the marble will naturally go down that particular path. Eventually the channel becomes so established it is almost impossible for it to go down any other way. But, before too much time has elapsed, if the marble is pushed in just slightly different direction, a new path will be formed and it will naturally go down this one instead.

Early intervention with eating disorders, or disordered eating as it is also called, works the same way. It can help the brain establish new pathways. With encouragement and practice, the patient will adopt and maintain healthier eating behavior.

Variable factors contribute to eating disorders
Disordered eating, which often begins in adolescence when social, academic and family pressures are overwhelming, is a way of regulating negative emotions and coping with stress and disruptive life events. It develops from what we in the medical community call a complex array of predisposing, precipitating, and perpetuating variables.

Predisposing variables are personality attributes—being self-critical, a high achiever, or perfectionist— for example. Other common predisposing factors include suffering from depression and anxiety, past struggles with weight, experiencing a trauma, a family history of eating disorders or poor family dynamics. Genetics and psychobiology play a predisposing role if there is a tendency to like or crave or like certain foods. Cultural messages, which are often unconscious, are also considered predisposing factors.

Precipitating behaviors are things like obsessive dieting or restricting certain food groups. Specific triggering events where disordered eating develops—such as death or illness of a loved one, or weight loss resulting from illness or medical problems, would also be considered precipitating.

Perpetuating variables are the cognitive and behavioral influences that make it difficult to combat eating disorders. Beliefs and attitudes about food, black and white thinking, fear of weight gain, and overvalued ideas about weight and shape are perpetuating variables. These attitudes often precede eating disorders but can also develop as a consequence of disordered eating and weight loss.

Eating disorders lead to physical and mental impairments
Lack of proper food intake has severe consequences. Body functions breakdown. Starvation affects serotonin and dopamine levels in the brain, the neurotransmitters that are critical for positive emotions and personal happiness. A chemical imbalance can also lead to the development of other co-occurring mental illnesses such as anxiety, depression and substance abuse.

February 22 – 28 is Eating Disorders Awareness Week.
There are steps parents can take to prevent eating disorders from developing. Change behaviors, beliefs and thoughts directly related to food that are destructive. Address the psychosocial and personality variables that contribute to the onset of disordered eating. You may need the help of a professional clinician, but a few suggestions are given below. As with the marble rolling down hill, take early action before the pathways become embedded and a life is lost.

So how can you help foster a positive body image in your kids? Here are a few suggestions:

Try to avoid criticizing yourself or others about weight or shape in front of kids.

Avoid talking negatively about food – “I can’t eat potatoes because they’re carbs” or “That cake will go straight to my thighs.” It’s more important to teach the importance of healthy eating and exercise without references to weight.

Compliment children on their talents and accomplishments– A little praise goes a long way especially when it’s well deserved.

Let your kids know that weight gain and changes to body shape are a natural part of the growing process.

Talk to your kids about their use of social media and what they see on TV – Only 5% of American women have the body type that is portrayed in advertising as the ideal size and shape for women. When I look at movies even from the 1980s the tolerance for diverse types of bodies was much richer than it is now.

Dr. Kleifield received her BA from Stanford, Ph.D. from Rutgers, and held a Fellowship at Cornell. She is a Clinical Instructor of Psychology and Psychiatry at Weill Cornell Medical College, and is a member of the Academy of Eating Disorders, the Connecticut Psychological Association, the New York City Cognitive Behavioral Therapy Association, the Association for Contextual and Behavioral Therapy and the International Society for Schema Therapy.