This article was written by Chandra Johnson-Greene and originally published on StamfordBuzz.com

From a national point of view, the sport of squash tends to stand in the shadows of tennis and perhaps even raquetball, but here on the Gold Coast, it is a popular way to maintain both physical and mental health, spend time with friends (or make new ones), and for younger athletes, to gain access to top-notch colleges and universities. 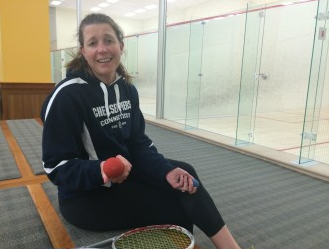 And for southern Fairfield County residents looking to start or improve their game, they’re lucky to have a five-time national U.S. squash champion in their midst to learn from. Natalie Grainger, a former world #1 ranked player, has served as the racquets director at Chelsea Piers CT for the past two years.

For Grainger, who was born in England, raised in South Africa and now lives in Greenwich, squash was in her blood from an early age.

“I wasn’t given a choice,” she told Stamford Buzz. “My parents were both British [squash] champions. My mom taught me how to count by hitting the ball. I played other sports like tennis and field hockey, but I always went back to squash.”

Grainger, 36, competed in her first tournament at the young age of seven and by the time she was in her teens, she was traveling abroad to compete. When it was time to graduate from high school, Grainger said that she was faced with the tough decision of going professional or heading off to college.

“It was difficult because all of my friends were going to college, but after thinking about it I realized that my brain wasn’t going anywhere, so I joined a tour in Britain for the next four years,” she said.

By 2003, Grainger was the #1 squash player in the world. Fast forward to 2014 and Grainger is now spreading her love and admiration for the sport through her work at Chelsea Piers. “There so much going on [for squash] in this area,” she said. “More schools are creating squash programs — it’s such as exciting time.”

Squash, which this reporter can attest to after her very first lesson, is not for the faint of heart, according to Grainger.

“With squash there’s lot of turning and lunging, and the ball is traveling fast. It keeps you moving,” she said. “You’ll get a strong backside, legs and core – it targets all of those elements. It’s great for cardiovascular [strength] because it takes your heart through the roof. It works your heart twice as hard as walking on a treadmill in a shorter period, but you won’t even realize that time has gone.”

Grainger ensures that squash not only works up a good sweat, but can also be entertaining and rewarding.

“Unlike tennis, you’re in close quarters with your opponent, so you become more familiar with them,” she said. “Afterwards, opponents will go and have a drink together… you build friendships.”

In this video, Grainger demonstrates some squash basics for beginners. For more information about the Squash Club at Chelsea Piers CT, which offers private lessons, tournaments, organized leagues and youth programs, call 203-989-1600 or email [email protected].