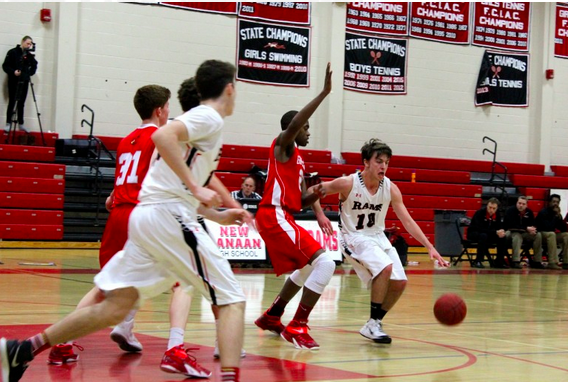 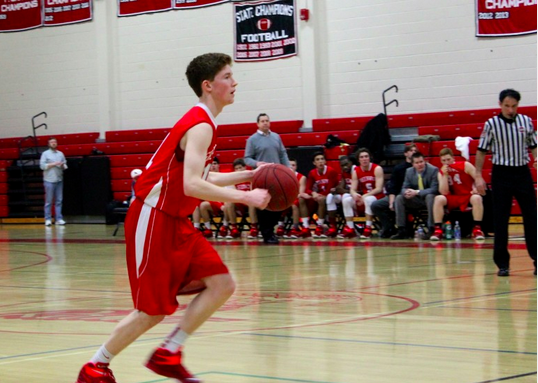 Conor Harkins scored 24 points, including 15 in the 1st quarter to lead the Greenwich Cardinals boys basketball team to a 63-58 win over New Canaan.

With the loss, the Rams (3-12, 1-12 in the FCIAC) now need to win all five of their remaining games to qualify for the state tournament, while the Cardinals improved to 5-10 and 4-9 in conference play.

“It was a great win,” Greenwich head coach Pat Heaton said. “It’s our first two-game win streak so the kids are excited about that. It shows that the kids are better as the season goes on.” 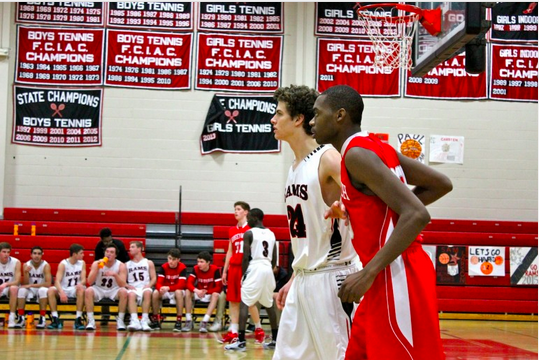 Harkins put on a show soon after the opening tipoff. The sophomore shooting guard drained 4 three-pointers to help the Cardinals open up a 23-10 advantage over the Rams after one quarter. It was a hole out of which New Canaan was never able to dig.

“It’s tough to deal with that,” New Canaan head coach Mike Evans said. “The tougher part is why did we let him shoot after the first make? Unfortunately that’s what kind of defines us as a team. These kids need to play more basketball. I think that’s a lesson you learn on the court—a kid makes the first one, you make sure he doesn’t make the second.” 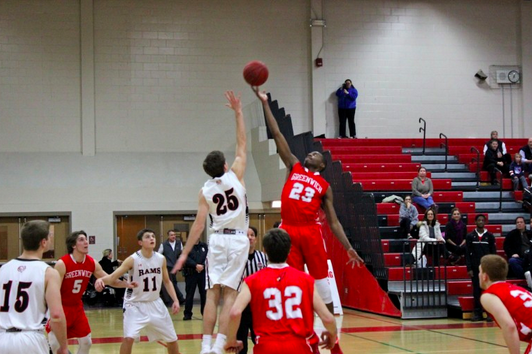 New Canaan was able to hang with Greewich in the second quarter at sophomores Timmy Russo and Michael Svagdis scored three points apiece. Harkins, however, would add another 5 points to his first half total as Greenwich took a 36-18 lead into halftime.

New Canaan would respond after the break, outscoring Greenwich 20-16 in the 3rd quarter as senior co-captain Claude Chandonnet—who was uncharacteristically held scoreless in the first half—scored 9 points. Sophomore James Crovatto added 4 and junior Kyle Smith netted 3 as New Canaan was finally able to gain some offensive momentum. One big reason was the play of co-captain Paul Hagopian, as the senior point guard was able to create shots for Chandonnet with penetrating drives in the paint.

“Paul had a great effort in the second half,” Evans said. “Claude wasn’t keyed on by them. I think when things aren’t working for us all, it’s not going to work for an individual. Claude needs everyone to be clicking to get his shots and we couldn’t get them for him. But you never saw a drop in effort out of that kid and you never will.”

New Canaan continued to claw back in the 4th quarter, pulling to 54-47 after a Crovatto jumper and sophomore Tyler Sweeney’s pair of free throws with 3:09 left to play. Harkins and senior Griffin Golden hit foul shots to put Greenwich ahead 58-48, but a three-pointer by Sweeney would get New Canaan back to within 7, trailing 58-51 with 1:18 left. Another Sweeney trey pulled the Rams to within 6, and a Hagopian layup got New Canaan back to within 5. Unfortunately for the Rams, time ran out before the comeback could be completed.

“We don’t give up,” Evans said. “Our kids play really hard. It’s a trait of New Canaan kids overall I think, which was remarkable. The problem is that we go into debt so deep, that if we had the effort when we’re down, we’d probably win a lot more games.”