Although the weather doesn’t make you think of baseball, the season is right around the corner.

The Yankees made many moves with Carlos Beltran, Masahiro Tanaka, Brian McCann, Jacoby Ellsbury, and Robinson Cano leaving. The situation has  changed a lot during the off season. Along with the additions and subtractions in free agency, Derek Jeter announced that this is his final season. So it is sure to say that this baseball season will be interesting to watch for Yankees fans.

The Yankees open the season on Tuesday night April 1st at 7:00pm in Houston, playing against the Astros. CC Sabathia will start the game pitching. That brings me to one of the question marks the Yankees have to start the season. Will CC Sabathia return to his pre-2013 form? He might be a good pitcher, but if he is he won’t be the same as before. His maximum velocity is around 88-89 MPH. He is known for having an overpowering fastball around 95 MPH. CC is going to have to learn how to use his location rather then just mowing down batters with fastballs. It didn’t work out last year, as Sabathia had a down year as the Yankees number 1 starter.

It seems that the Yankees pitching is in place. After Sabathia, Hiroki Kuroda, Ivan Nova, Masahiro Tanaka, and the long awaited arrival of Michael Pineda will happen this year in the final spot for the starting rotation.

There are questions with Kuroda and Tanaka, but Kuroda in my opinion will have a good first half like last year and fall off a little bit in the second half from fatigue, because that just happens to old guys like Kuroda.

As for Tanaka, nobody knows. Not even the Yankees. On a positive note, the Yankees have scouted him since 2007, and they are the Yankees. They have money, so their scouts in my imagination should be top notch. I can’t imagine that this guy is going to be a complete bust. It also seems certain that he is a solid guy and could have a personality like Hideki Matsui.

As for the lineup I think that will depend on whether they key guys stay healthy. As much as center fielder Jacoby Ellsbury gets hurt, I wouldn’t be overly concerned with him. The injuries that have happened to him include situations like running into a teammate for a fly ball. He plays the kind of baseball that you like to have. It’s aggressive. Also if he needs a day off, the Yankees have the kind of depth in the outfield to do that. They can simply move Brett Gardner to center field, and put Soriano out in left field for a day while they move Ellsbury to DH or rest him the whole game. They could also do that with Carlos Beltran who is on the older side. They can put Soriano out in right field for a game or two and give Beltran a day off or move him to DH for a day. That is also a good upside of being in the American league is that they have the DH. So there could be a rotation in the outfield throughout the season.

Another important question for the Yankees is whether Mark Teixeira can come back and be himself again. He might not be himself right away. He always gets off to a cold start with the bat in the beginning of the season, then heats up after the first month or couple of weeks. So coming back from a wrist injury, it is almost certain that his bat won’t be so lively for a little bit of the season. But people tend to forget that Mark Teixeira is one of the best defensive first basemen in the league. Although his bat might not be there at the beginning, I’m sure his defense will be top notch like usual or at least close to it.

The infield will be the biggest challenge for the Yankees. They could possibly improve this by having Ichiro Suzuki on the Trade block and picking up another infielder. But their infield could be hard to fix completely. The shortstop position will be taken by longtime Oriole Brian Roberts. He is known for getting hurt. But if you have been paying attention to spring training, Yangervis Solarte has been tearing it up. He could possibly step up and play second base for a little bit while Brian Roberts could be out. Derek Jeter in his final season could have some trouble staying on the field. So that is why the Yankees have brought back Brendan Ryan. He is statistically one of the top defensive shortstops in baseball. He seems like he uses a toothpick for a bat. But his defensive play will be important as he is not a starting shortstop. Third base will be a mix up this season. It will probably be a platoon with Eduardo Nunez and Kelly Johnson. Eduardo Nunez surprisingly looked good near the end of last season and Kelly Johnson could be a guy who could fit in temporarily. This year at third base is clearly going to be a wash.

So this year is obviously going to be a lot different for Yankees fans or any baseball fans. The Yankees get a lot of attention because they are from New York and have the most championships.

So here is the moment of truth: predictions. If I were to make a prediction for how well they will do, I’d say around 90 to 92 wins and a couple of games behind the rival Red Sox for the division and in the first wild card spot. If you want to know playoff predictions I have them winning the wild card game and meeting the Red Sox in the ALDS. 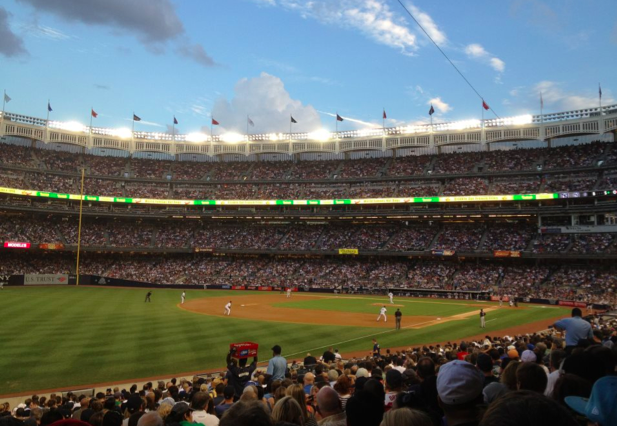