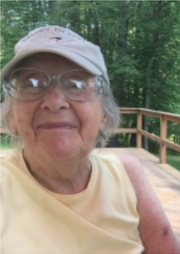 Anne Guest Ameden of Fairlee, Vermont died on May 3, 2016 at Mertens House, Woodstock, Vermont according to her daughter, Andrea Ameden Abbott of Greenwich. Anne was born in New Rochelle, New York on May 8, 1924 to Edwin H. and Katherine Twohey Guest. She spent her youth growing up in New Rochelle and Mamaroneck, New York, while summering on Lake Morey in Fairlee, Vermont.

After graduating from high school, Anne attended Stephens College in Missouri. After graduation, she returned to New York where she worked for a number of years before being introduced to Kent Ameden on a blind date. They married on June 7, 1947 in New Rochelle, New York.

During their 61-year marriage Anne and Kent led an active life raising six children and moving several times throughout New England as Kent pursued his career. These travels included living for five years in Cos Cob until 1964, and then returning to Greenwich again in 1972. At this time, Anne became a real estate broker and spent a number of years in this field until she retired in 1997. In retirement, Anne enjoyed traveling with Kent throughout the United States and the Caribbean. In 2002 they moved to Fairlee, a natural choice given their affection for the area. Anne had introduced Kent to Lake Morey in Fairlee where Anne’s family had a summer cottage. They were both fond of boating, fishing and swimming off the dock of the cottage, leisurely activities they loved to share with their children and grandchildren. Throughout her life, Anne had a passion for art and painting, which she was able to pursue in her final years while enjoying the natural surroundings in Fairlee.

Anne is survived by all of her six children, ten grandchildren, her brother, Pete and his wife Jen. She was predeceased by her parents, Kent, and three grandchildren, Lua Ameden and Jonathan and Gregory Abbott. A family memorial service will be held on Lake Morey at a later date. The family would like to express their deep gratitude to all of the caregivers who helped keep Andy in her home as long as possible, as well as Mertens House in Woodstock for providing her with their kind love and attention these last three months. In lieu of flowers the family asks that you make donations in Anne’s memory to the Lua Ameden Campership Fund, c/o The Aloha Foundation, 2968 Lake Morey Road, Fairlee, Vermont 05045.