Government transparency has been a topic fervently discussed in recent years.  The perceived trend in relation to this is a decrease in knowledge of one’s government.  On Tuesday May 19th, the League of Women Voters of Greenwich acted to combat that trend.

The purpose of the discussion was to better inform the audience of the RTM of the Town of Greenwich.  The RTM was founded in 1933.  Its role is similar to that of the U.S. Congress; its members vote on issues as representatives of their districts.

The government of the Town of Greenwich may easily be described as decentralized.  Contributing to that is the size of the RTM, which includes 230 members.  A level of distribution of power is maintained among the relatively large number of representatives, and thus among the citizens themselves who are represented. The body is nonpartisan. Although there is party affiliation among members, there is also a designated minimum percentage of minority party representation. The committee is structured to promote discussion of an issue from all sides.

Of Greenwich’s RTM Byrne had this to say: “We have in place what approaches pure democracy.”

The RTM has maintained a high level of transparency aided by the use of computerized technology since 1998 to both archive its meetings and make them available to anyone via the internet.  All RTM meetings are public.

The members of the RTM are essentially volunteers who are, in Wells’ description, “Interested in their town government, who want to do their civic duty, who want to volunteer their time.”  Elections are held every odd year corresponding to two year terms, with a turnover rate reaching almost seventy new members after every election.  The  results of this rate are a higher level of representation and less political stagnation, but also a possible risk of instability.

Those interested in running for RTM membership must be registered to vote in Greenwich, and file by mid September a petition signed by at least twenty five registered voters from their district.  Current members often sign the petitions of possible new members. 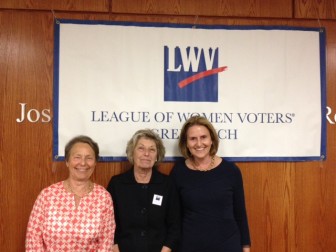 Members of the Steering Committee of the League of Women Voters of Greenwich: Caroline Adkins, Cyndy Anderson, and Sara Burnett. Credit Nadeau

“The League of Women Voters, a nonpartisan organization, encourages informed and active participation in government, works to increase understanding of major public policy issues, and influences public policy through education and advocacy.”

The next meeting of the League of Women Voters of Greenwich will take place on June 3rd at the Riverside Yacht Club.