If Howard Richman has it his way, he will win the elected position of Tax Collector for the Town of Greenwich, and quickly pivot to have the elected position eliminated. Specifically, Richman feels that since tax collector does not have to have any particular qualifications, it is a patronage position.

“I am running for the position of tax collector because it’s the time for Greenwich to have the position become appointed and not elected,” Mr. Richman said, likening the transition of the job to one that is hired through the human resources department as similar to the Assessor’s job.

“The assessor’s job has been appointed since the early 1990s,” he said. “Previously that was an elected position.”

Richman said that if the Tax Collector job is hired through the traditional hiring process, the employee might potentially receive BET oversight. Also, he said,  “The work load would be overseen more than it has now.”

“This is a referendum on whether the tax collector position should be appointed in November or elected,” Richman said of his candidacy.

The tax collector is in charge of  five professional individuals who are hired by the Town, which Richman pointed out is significant for a couple reasons. First, he said, one of those professionals might make a good candidate to become Tax Collector, and in the process eliminate the current $96K+ tax collector salary plus benefits.

“My understanding is that if it becomes an appointed  job, the personnel department would do what they do in any instance when they’re looking for a person to fill a job,” Richman said.

“The other idea is to explore whether some of the people working in the department could possibly be shifted to other departments when they are not needed in the tax collector office. Most of the reports come in in August and February,” Richman suggested.

Mr. Richman said his goal is to get elected and become certified by the Connecticut Tax Collectors Association, the organization that certifies tax collectors. “You simply take a course through them,” Richman said.

According to Mr. Richman, an attempt has been made to change the Tax Collector from elected to hired by the town twice in the past. He said the proposal was initiated by the BET, but it was rejected by the RTM in 2002. “The issue has not been looked at in 13 years,” he said. “I would do is work with the BET and RTM as closely as possible. There are both Democrats and Republicans on the BET who want this to happen.”

Mr. Richman, who is passionate about Greenwich, having moved here in 1992 for our town’s public school system, in which both his children thrived. He has 30 years of magazine publishing corporate experience and has worked at his own small business. He is the Treasurer for the Democratic Town Committee. “The responsibility is there to keep the finances correct. I have to answer to a higher authority which is the state elections enforcement commission. Each quarter I file a Form 20 with all contributions and expenditures. If it’s incorrect, I’m liable for a fine,” he said.  “This certainly qualifies me for the tax collector position.”

“The job of the Tax Collector is to collect the taxes and that entails getting them in and deposited in a timely fashion,” Richman said, adding  that of the 200 taxing authorities in Connecticut, about half are elected, and about half are appointed.

More significantly, he pointed out that there are 12 municipalities with a population the size of Greenwich (60,000+). “Of those twelve municipalities, ten have tax collectors who are hired employees,” Richman said.

“When my opponent took office there were some serious issues about when the tax bills went out. There were lost checks,” Richman said. “But I’m not running this race to criticize my opponent, because it’s not about his performance in office. We had a lively debate on Thursday night with a healthy turnout. It was evident to me that my opponent and I have different positions on the elected versus appointed and I got my message out.”

As to whether Mr. Richman would accept the $96K+ salary, he replied, “I’m always been paid for the work I’ve done, and since I would be losing my source of income if I were to win, and giving my full effort and time, I would take the salary.” 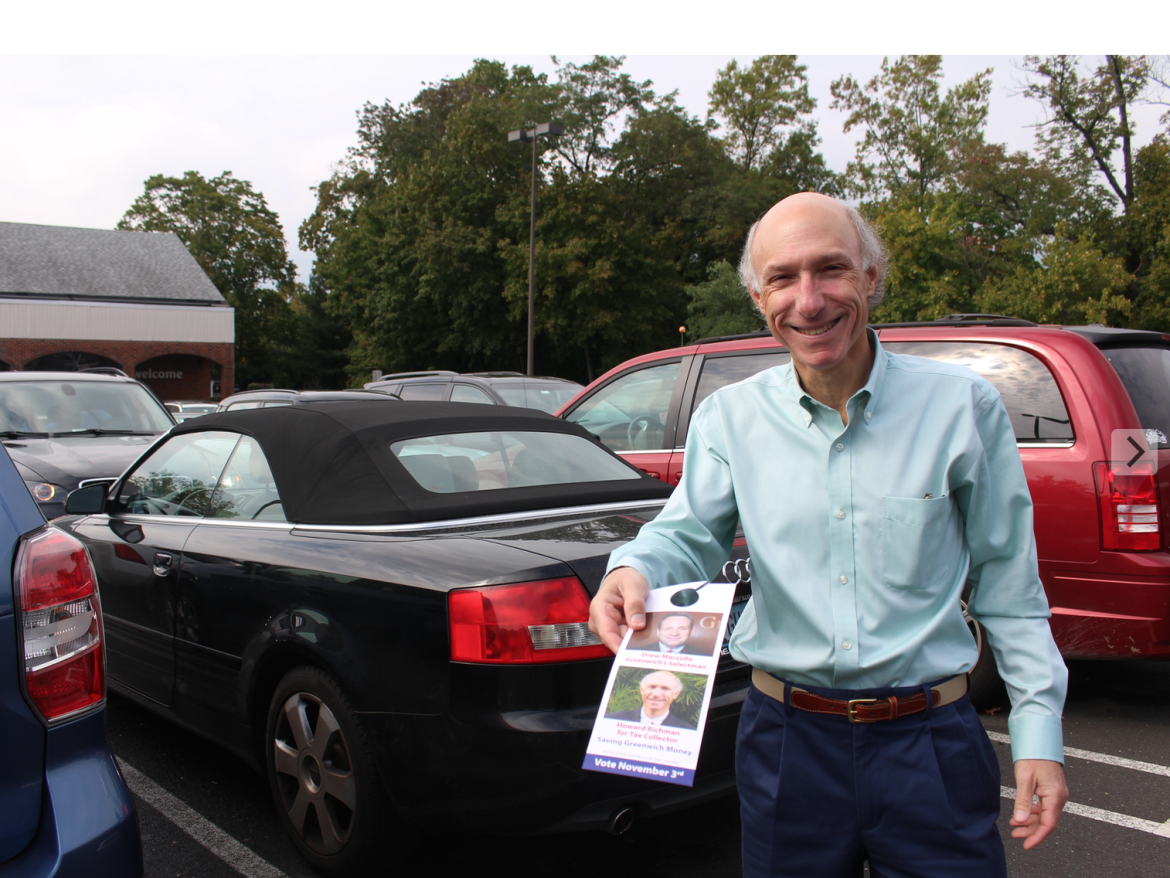