Part Two in a Series on Heroin Addiction

Everyone is talking about heroin in Norwalk.

Along with their parents, children as young as grade school and middle school attended the 10th annual Courage to Speak family night on Tuesday at West Rocks Middle School to talk about drugs. 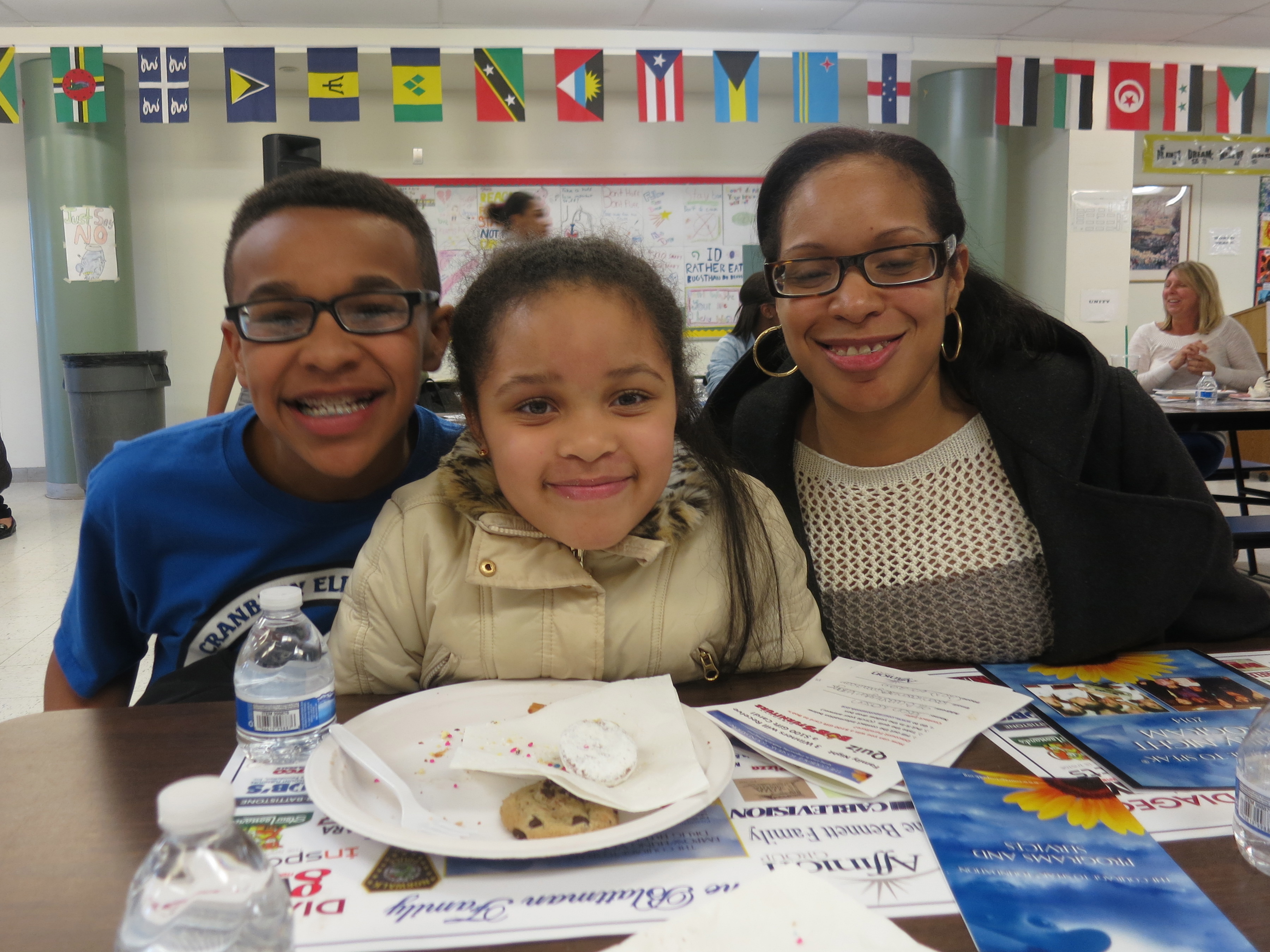 Seventh-grader Jason Iverson with sister Bryana, a third grader, and their mother Firmina King who grew up in Waterbury in the 90s when she said the drugs of choice were cocaine and acid.

“It was sad and emotional,” West Rocks 7th grader Jason Iverson said, describing Ginger Katz’s visit to his school to talk about her 20-year-old son’s death in 1996 of a heroin overdose.

“Most people were crying. Boys too,” Iverson said.

Seated beside his younger sister, Iverson explained that he had asked his mom, Firmina King, to bring them both to family night.

“I had already signed us up,” said King who had received a letter in the mail. “This is very helpful. It’s good to expose them to this information.”

King, who grew up in Waterbury in the early 1990s recalled that when she was a teen the drugs of choice were cocaine and acid.

Iverson brought the conversation back to the present. “Now it’s inhalants. It’s Sharpies. It’s spray paint,” he said. “It was like scared straight,” the seventh grader added, referring to the Courage to Speak curriculum. “You learn the effect and damage drugs have on your family members.” 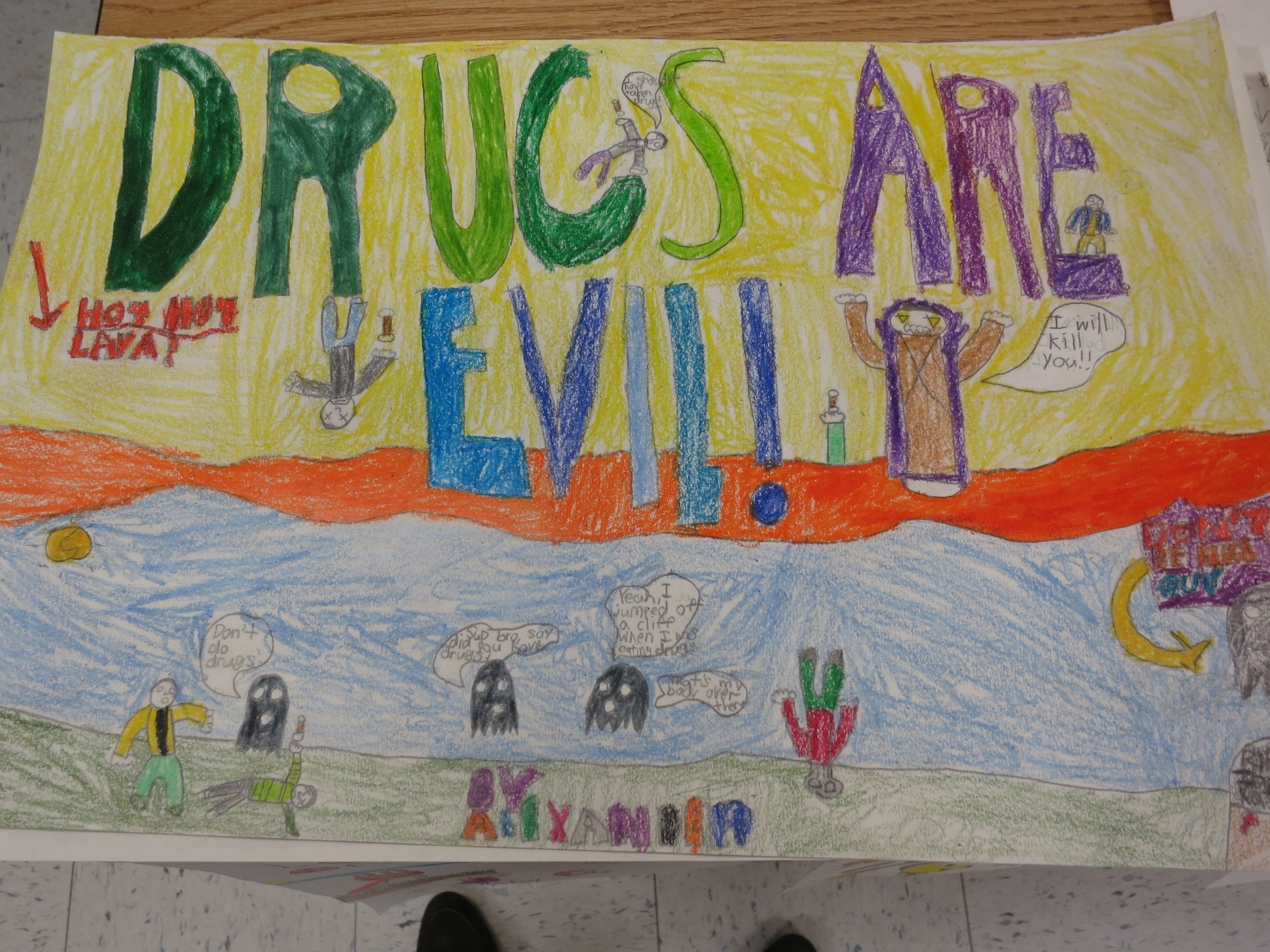 During dinner the cafeteria was flooded with student posters warning of the dangers of drugs.

“Ginger provides us with the materials,” said Lois Snelson a Health Ed teacher at Roton Middle School. “This is the tenth year it’s been in the curriculum.”

Snelson said the youngest children read Sunny’s Story about Ian’s decline and death from heroin written from the point of view of the family’s pet Beagle. 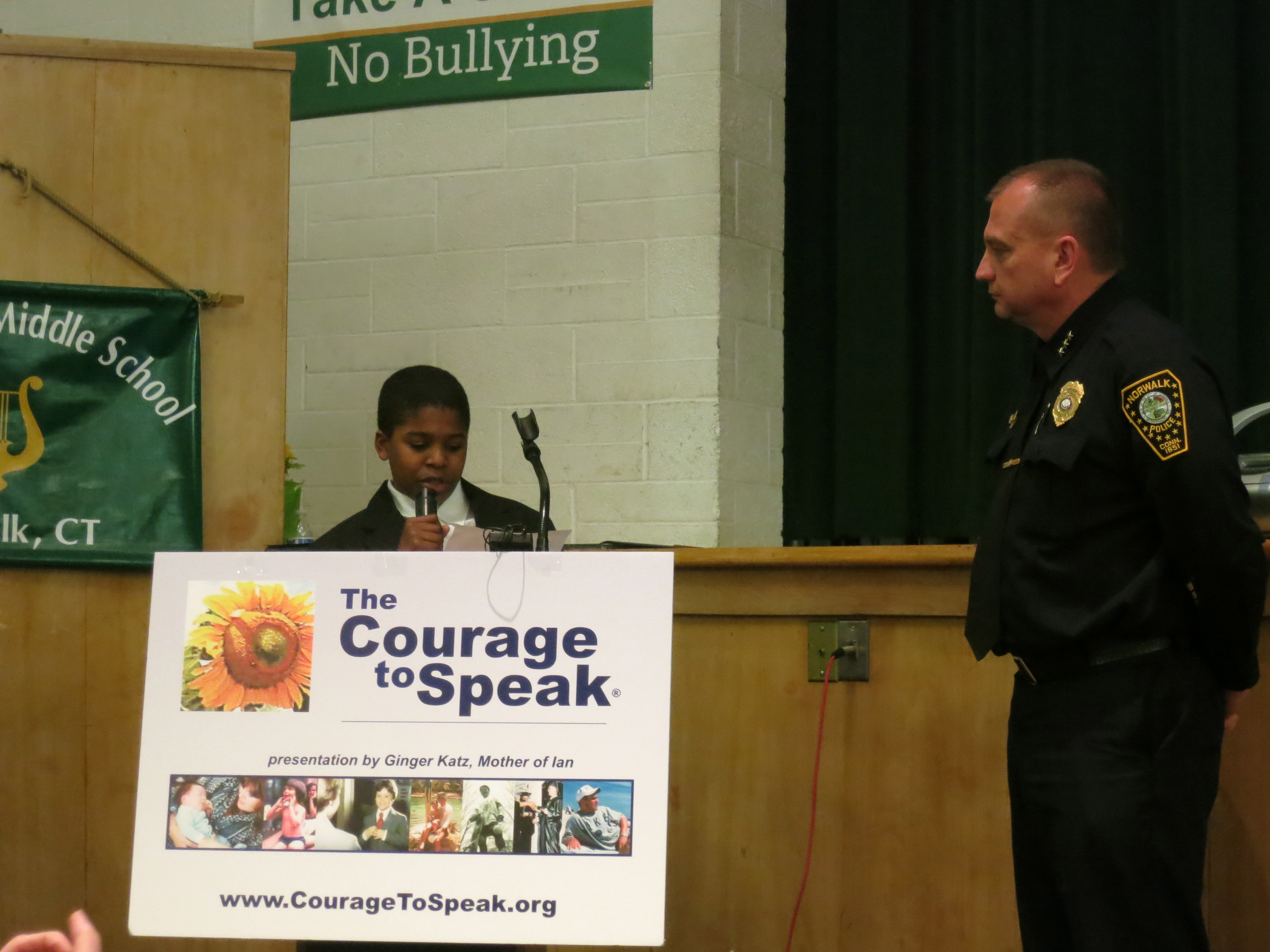 Police Chief Kulhawik introduced a series of students who read aloud their letters to Ginger Katz.

Family Night was attended by the police chief, the mayor, state representatives and senators, the DARE officer, the public schools superintendent, and health & wellness staff.

High school students were on hand, volunteering in the parking lot and greeting guests.

The message was one of prevention and education. Jim Himes and Sen. Blumenthal both sent letters of support that were read aloud. Michael Bodicelli, White House Acting Director of National Drug Policy, sent a taped video that likewise supported the mission of Courage to Speak.

The emcee was State Rep and Minority Leader Lawrence Cafero, a former social worker, who explained that in his role as expulsion officer for Norwalk Schools he has come to view heroin as an epidemic in Connecticut and across the country. “I see a lot,” Cafero said. “Drug use is one of the most persistent problems, though the drugs of choice change over the years.”

Gateway Drugs
Cafero joined Police Chief Kulhawik and Mayor Rilling in lamenting the legalization of marijuana, which they view as a gateway drug.

“It tells kids it’s okay,” said Cafero who said that he can tell from a student transcript when they started smoking marijuana, and what starts with “12-year-olds getting high at the bus stop,” leads to a steady decline in grades and withdrawal from activities.

“We’re at a crossroads,” Police Chief Kulhawik said. “We’re sending mixed messages to our young people. With legalizing, decriminalizing marijuana, and misuse of prescription drugs by adults every day, which is leading to kids becoming addicted to the same drugs, which is leading to heroin and other things. As adults, perhaps we’re failing our children — how we’re conducting our lives.”

The Story of a Family
Ginger Katz said her son Ian had a big heart, which she attributed partly to his sister, Candace, who has Downs Syndrome, and that he had a talent for karate and lacrosse.

Katz spoke of her son’s long battle with drugs and categorized much of the reaction among adults as “enabling behavior.”

There was the cop who caught Ian smoking in the park and sent him home with a free pass. There was the time she waited an extra day to demand a urine sample, giving Ian time to get a clean sample.

Drugs and Violence are Connected
Katz said Ian showed signs of trouble in high school. Senior year, Ian received a Jeep from his biological father as a gift. One night, according to Katz, around 2 am, the car exploded in the family driveway. Flames  shot up over the house.

“The car was fire bombed by a molotov cocktail, Katz said the family learned after an investigation. “Drugs and violence are connected. Ian was in over his head. We never found out who did this.”

After a Death, Secrets Unearthed
“After his death a lot of his friends would visit me because they wanted to see Ian in my eyes,” said Katz.  One boy confided that he had done a lot of drugs before getting straight and that drug dealers had him do favors, including firebombing cars.

“Ian was in over his head,” Katz concluded.

In college Ian was involved in a violent fight, but instead of being kicked out of school, his biological father pleaded with the dean and Ian was allowed to do community service. Before he completed his hours of service, an adult waved the remainder.

Katz next described how Ian began snorting heroin and became hooked, but that he convinced his biological father to keep it secret from her when he went to a rehab facility several blocks from college.

Ironically, Katz said that at one point, she asked a doctor about Ian’s situation, and was told it was confidential because he was over 18 and therefore an adult.

Katz said her son moved from marijuana to cocaine in his freshman year in college. “Then, sophomore year…  Heroin comes in small packets that can be snorted or smoked. Kids back then thought it was no a big deal,” Katz said. “A boy in his dorm, a heroin addict, gave three boys heroin one night. One got scared. One got sick. Ian got hooked.”

Secrets and More Secrets
After Ian’s death, two of his girlfriends said Ian had told them he had been inappropriately touched by a babysitter when he was 10. Katz said that one of the most important part of her program is that every child find 3-5 adults they trust and share secrets with. “Don’t keep your pain inside. Have the courage to speak.” 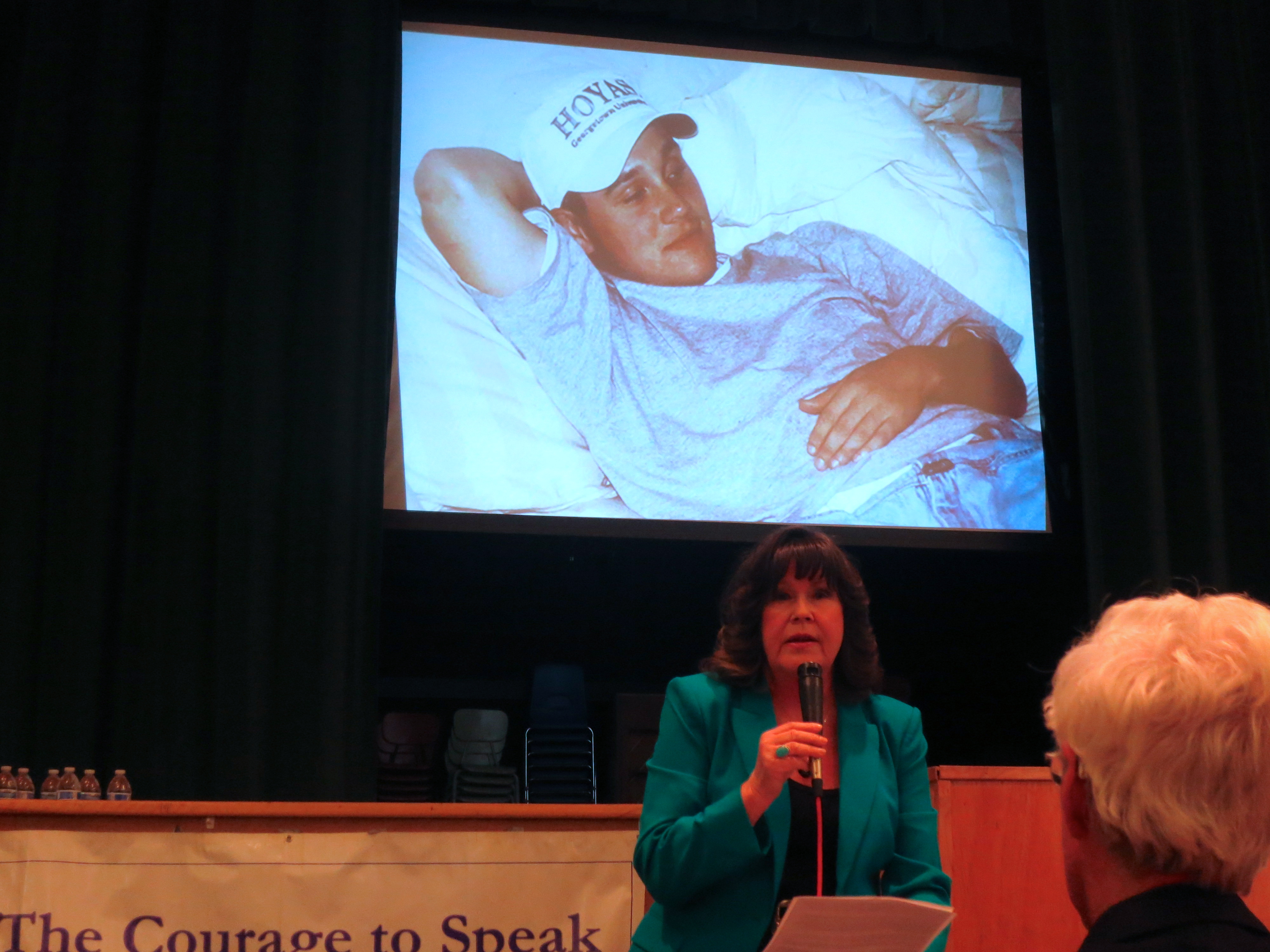 Katz said that after Ian’s death, she was told the toxicology report on Ian’s death would take some time. “But we knew. Doctors told us to tell people Ian died of an aneurysm or a heart attack and that wasn’t the truth… I had a vision of speaking out. I said if this is happening to us, it’s happening to other families. And I never lied about Ian and wasn’t going to start lying after his death. I was not ashamed of him,” she said, adding that the next day she and Larry buried Ian and began speaking out.