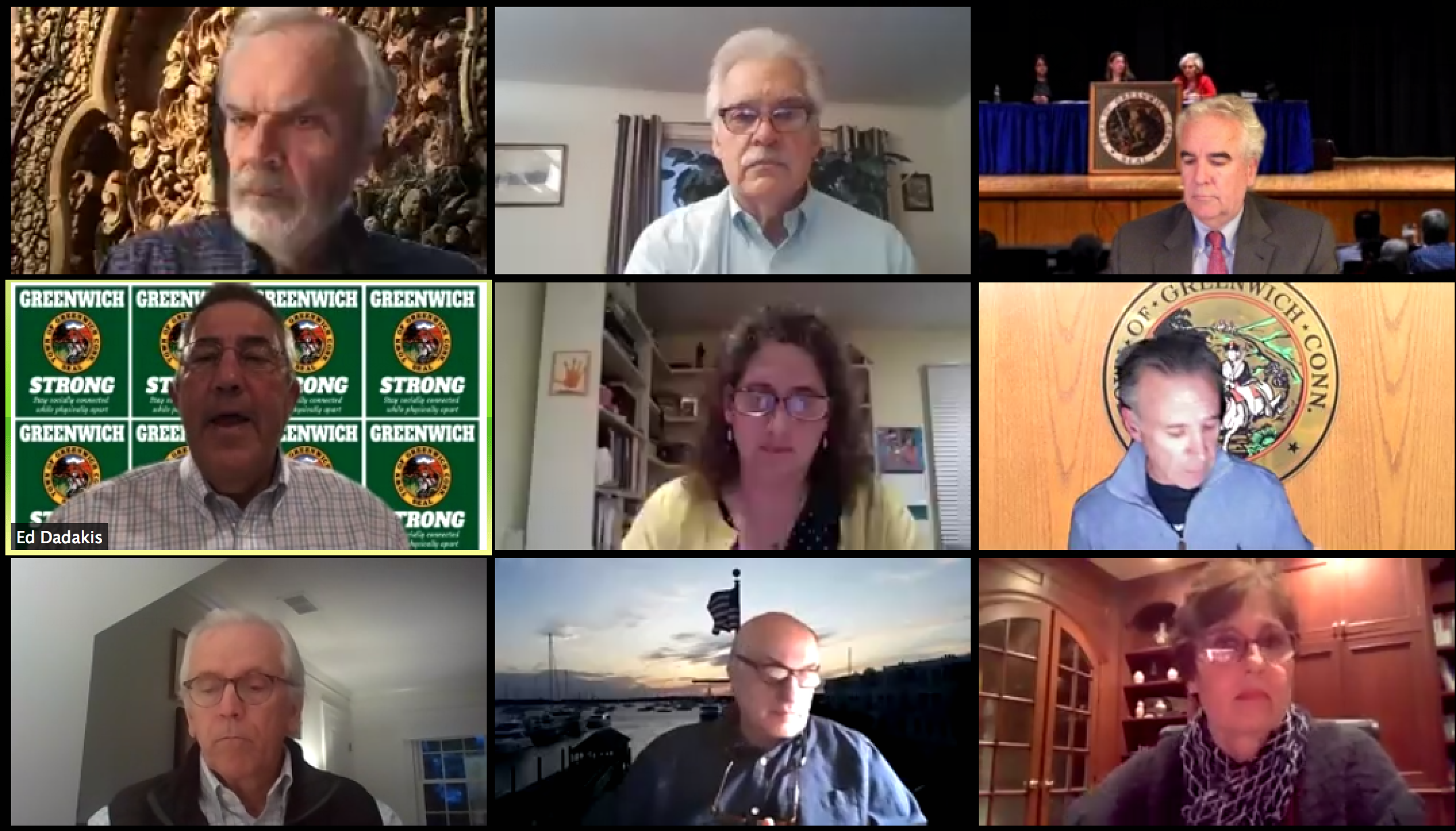 On Monday night, item 1 on the RTM agenda was a Sense of the Meeting Resolution that initially contained two parts, with one relating to reopening Greenwich parks and beaches, which were closed on March 22 per order of First Selectman Fred Camillo to slow the spread of COVID-19.

A petition was submitted to the Town Clerk, and the SOMR was on the call Monday night.

However since that petition was submitted, Mr. Camillo partially reopened town parks, beaches and golf course, so that aspect of the SOMR was moot.

The other half of the SOMR asserted that the $100,000 the First Selectman and the BET approved for the Greenwich United Way denied the RTM its statutory authority to vote on any expenditure $5,000 or greater.

People in support of Camillo’s decision said that back in mid-March there was no known means to involve the RTM.

Camillo said that back on March 16 no one knew about the possibility of meeting virtually. “The first practice run (on Zoom) the RTM did was three weeks later,” he said.

He explained that he had collaborated with members of emergency operations task force and consulted the town attorney.

“We all donate to charities and we do not need the government to decide where our charitable donations should go.” – Laura Gladstone

“We decided to go to the BET, and 12 members – 6 Republicans and 6 Democrats – asked a lot of questions and found it was really an emergency and voted 12-0 to support it,” he said.

“There was not one penny that went to administrative costs,” Camillo added, noting there had been a rumor the town money was going to United Way Salaries.

“In an international emergency I made decision in real time in collaborating with the emergency task force and the town attorney,” Camillo said. “At the end of the day, we made decisions with the health, safety and welfare of our citizens at heart. We did the right thing here. Shame on me if I had waited.”

“I find this last hour and a half to be an enormous waste of time. Business owners in town need our help and this is what we’re wasting our time on? If you want to go on record to feel you’re right about holding up badly needed funds for people, congratulations, when they write the book on the pandemic, history will judge you accordingly.” – Gary Dell’Abate

“While the broad impact (of the pandemic) was becoming more evident each day, there was no immediate financial emergency to appropriate money to the Greenwich United Way, that day or the next,” Galvin said. “While the funds were dispersed to the Greenwich United Way on March 21, the United Way grants weren’t granted until a month later, on April 21 – something not indicative of a financial emergency.”

“The town has a system of checks and balances so decisions are made by the many, not the few.” – RTM moderator Tom Byrne

“In the past we’ve had situations that might constitute emergencies, but in all of those, May 1998 a sewer line on Steamboat Rd broke, but a call was made to the RTM moderator to see how to work together…A call to the moderator allowed the RTM to remain in the process,” Byrne said.

“The approval of spending is the most important authority that the RTM has,” Byrne added. “If we can’t make an accommodation, so be it, we’ll deal with the emergency under Section 28. But the point is no effort was made to reach out to the RTM here. The moderator found out 10 days later in an email he sent to the BET.”

“This is about process. I’m shocked more people aren’t shocked this happened with out consultation of RTM.” – Brian Raney

“The route to hell is paved with good intentions,” Raney said.

Gary Dell’Abate commended Camillo. “We live in Connecticut but really we’re in a hot spot. …I thought Fred did a really good job when put on the spot and having to make a decision quickly. I think in a pandemic, some moves have to be made without consulting everyone in every moment.”

“Some people have concerns about the establishment of a dangerous precedent. I think a precedent has been established, and fortunately it’s one that sets a very high bar for approval.” – Mike Basham

“What we’re experiencing in this country at this moment is characterized as the worse economic crisis in generations,” Basham added. “I’m confident that future attempts to circumvent the appropriations process will undoubtedly be measured against this very high bar, and found wanting.”

Basham said the Greenwich United way acts as a conduit, and the organization is in the best position to determine who needs contributions more than others.

“The excuse that there was a pandemic does not hold up,” she said. “We’ve been through many emergencies – 9/11, hurricane Sandy and the great recession of 2008 – and in those instances the RTM was not circumvented for a charitable donation using the State of Emergency clause.”

Gladstone argued the First Selectman could have easily met with the RTM by calling a special meeting via phone.

“The First Selectman misrepresented to the BET whether intentionally or not that the $100,000 donation with our money would lead to a $5,000,000 private donation to help Greenwich families that never materialized and was never pledged in writing,” Gladstone said.

Dan Ozizmir said having so many Sense of the Meeting Resolutions come before the RTM was not a good use of time.

“I’d love to see the moderator, First Selectman and BET look at what happened and have a gentlemanly or ladylike conversation about the future,” he said.

Dan Quigley, RTC chair, supported Camillo. “I’m surprised that this evening we’ve heard this is about process and procedure. But let’s not forget where this started. On April 22 when this hit the press in Greenwich, 40,000 Americans were dead. Today 80,000 Americans are dead. We have a viewpoint from the First Selectman acting in real time, in the moment, to try to protect the health and life of its citizens, and expedite funds to the neediest people in the town.”

“We had another side of this argument, that proposed the SOMR, that referred to this as the greatest assault on our freedom, that they were ‘shocked that there was not revolution in the streets.’ This is not language about process. This was a SOMR that was meant to go after the First Selectman in my opinion.”

“The town is also getting back the money that it put in,” Quigley added. “I believe Fred Camillo, the Board of Selectmen and BET acted the right way.”

Ed Dadakis also opposed the SOMR. “It’s important to put it in the proper perspective of what was going on when these things took place…The world was chaotic. Greenwich was chaotic. People had lost their jobs. People had been furloughed. People’s paychecks were reduced. People were hungry,” he said. “I’m really a little sad we’re having to decide whether to vote on a SOMR that criticizes our First Selectman and our BET….I’d prefer to be voting on a SOMR that thanks Fred Camillo and our town leaders for all the hard work they have done keeping us safe.”

The RTM first voted to strip down the SOMR to just include the United Way appropriation. Then they voted to suspend the rules requiring a second read.