On Tuesday the Connecticut Appellate Court heard arguments in two cases in the performing arts center at Greenwich High School. The event was attended by the junior class as part of their social studies program.

The visit was part of the Appellate Court’s “On Circuit” program, launched in 1996, and, out of concerns for the COVID-19, was likely the last event of over 100 attendees to take place at the school for a while.

Bella House Administrator and Social Studies Program Administrator Lucy Arecco said the event was in the works for a full year and that both the Appellate Court and Supreme Court travel to either a high school or university annually.

Local attorney John Heagney coordinated with the Appellate Court for volunteers through the Greenwich Bar Association. Stephen Walko and Andrew Gould prepped the students on the two cases earlier in the week. 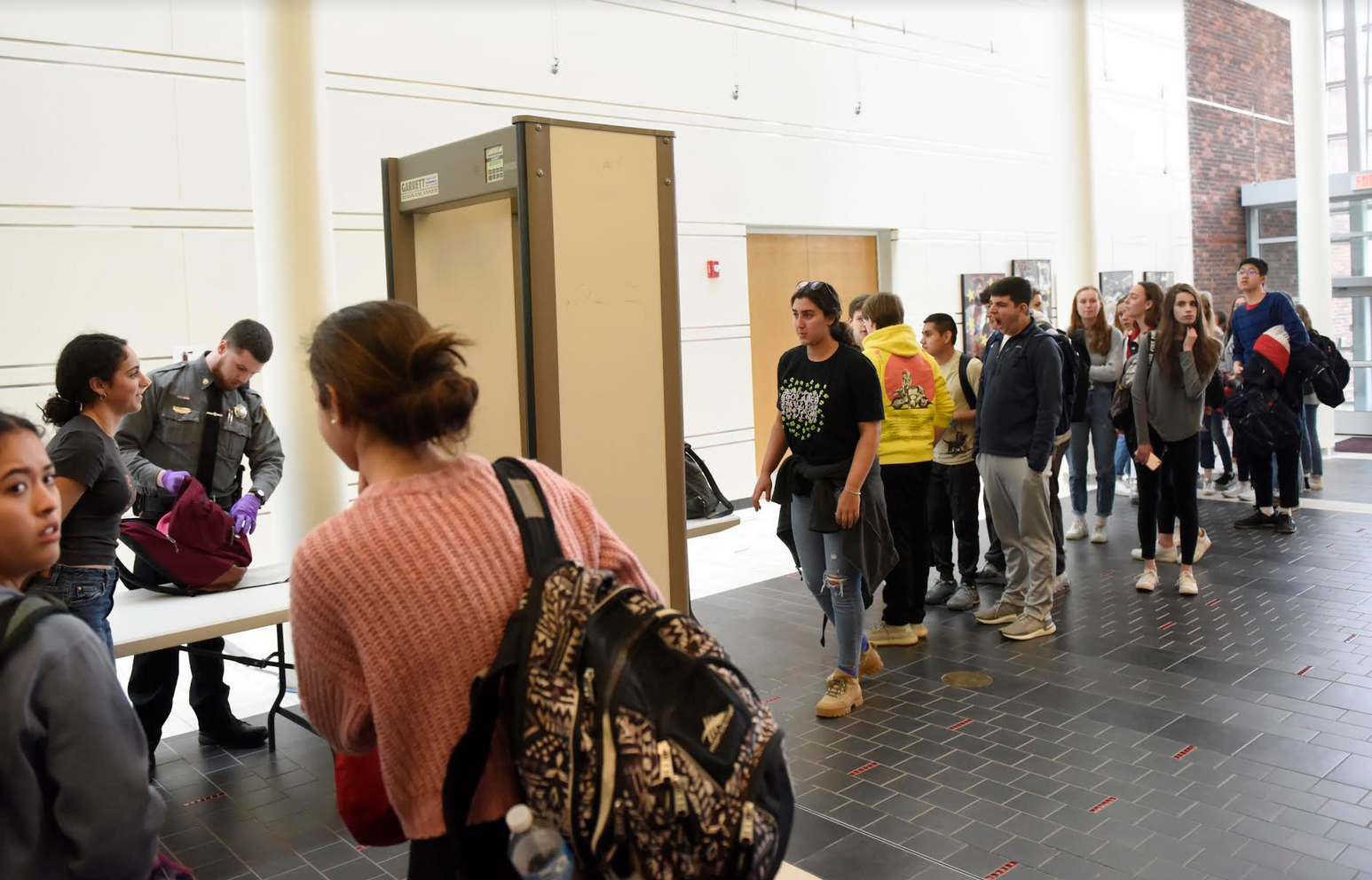 The presence of about a dozen uniformed State Marshals, who had set up a series of metal detectors in the gallery, did a good job of mimicking the experience of Stamford Superior Court.

During the proceedings students were not allowed talk or use cell phones. Nor were they allowed to wear hats or chew gum.

Each case lasted about 40 minutes, followed by a 20 minute question and answer session, and the students were not shy.

The first case was a search and seizure case out of Court in Waterbury in which the defendant Charles J Ingala of Watertown claimed he had a reasonable expectation of privacy and a warrantless search was not justified by exigent circumstances.

On Aug 28, 2016 a Watertown Police Officer arrived at the scene of a motor vehicle accident to learn that one of the vehicles involved had left the scene.

The officer was flagged down by a motorcyclist who reported that a man involved in the crash had just pointed a shotgun at his head.

The motorcyclist led police to Mr. Ingala’s home, a two-family building where the entrance was via a deck at the back of the house. Police spotted a car with heavy front-end damage in the driveway.

Officers proceeded with weapons drawn, identifying themselves, and called for Mr. Ingala to come out with his hands up. Handcuffed and detainied, Ingala repeatedly denied that there was a shotgun on the premises. He invited the police to look for one “anywhere they wanted.”

The police searched the interior of the defendant’s apartment and searched the grounds with flashlights, finding no gun. The police removed the handcuffs and announced that they were leaving.

However, the police did not leave. A short time later they observed the defendant using his cell phone light to look for something in a corner of the property. The police converged on the area and found a sawed-off shotgun in some brush.

Ingala was charged with Criminal Possession of a Firearm and Possession of a sawed-off shotgun.  He filed a motion to suppress the evidence obtained by the police, arguing that although he consented to the first search which he acknowledged was under exigent circumstances, the second search, which included the back yard, was warrantless and therefore illegal.

The trial court denied the motion to suppress, saying the defendant had no reasonable expectation of privacy for the shotgun because he had abandoned it, and that the second search constituted a reasonable continuation of the original search Ingala had consented to, and that it was carried out for the narrow purpose of recovering the shotgun. Lastly, they determined the search was justified under the “exigent circumstances” exception to the warrant requirement.

On the denial of his motion to suppress, Ingala entered a plea of nolo contendere, which is when a defendant in a criminal prosecution accepts conviction as though a guilty plea had been entered but does not admit guilt.

Also, Ingala claimed on appeal that the trial court wrongly determined he abandoned the shotgun when he threw it into shrubbery at the edge of his back yard, and that the second search conducted after the police pretended to leave exceeded the scope of the his initial consent. Finally, Ingala claimed the second search was not justified under the “exigent circumstances exception” because there was no evidence he ever fired the shotgun.

The search and seizure case was less technical than the second case, a slip-and-fall from the New London Judicial District, in which a woman fell on ice and landed on the back of her head, injuring her neck. 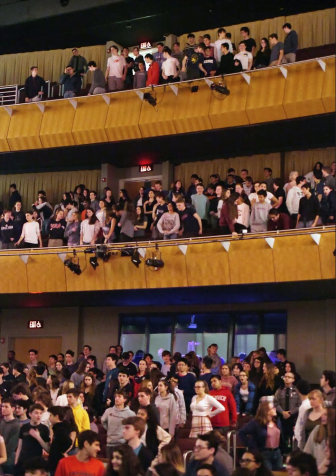 Students peppered the attorneys with questions, including why Mr. Ingala was not present at the event at GHS.

“He made a choice not to be here and subject himself to your questioning,” replied Adele Patterson, who is Assistant Public Defender in the appellate court, to a roar of disapproval from the students.

Mr. Ingala was charged with Possession of a sawed off Shotgun, an offense of itself, and possession by a Felon of a Firearm. Patterson said Ingala had a prior felony conviction, so his possession of a weapon added the second charge.

Patterson said that if Ingala wins his appeal it would go back to trail Court and his convictions would be vacated. Also, she said, he has been out on bond the entire time. “And he’s had his knee fixed. He could not run anywhere,” she said.

A student asked how the case might have been different if police had obtained a search warrant.

“A search warrant allows the police to go to a particular place defined in the warrant to get particular things also described in the warrant,” explained Assistant State’s Attorney Timothy Sugrue. “They can trespass. They can break down doors. They can overcome obstacles to execute the search for the most part.”

“They would have done exactly what they did, but lawfully,” Patterson said to applause.

“How often do cases like this turn out in favor of the defendant?” another student asked.

Patterson said the overall the reversal rate on criminal cases is very low.

Attorney Sugrue estimated the reversal rate to be in the area 10% to 15%, but estimated it would be a higher percentage in the Supreme Court than Appellate Court.

A student asked, “From the understanding that attorney Patterson’s client lied to the police and then hid the weapon, how does that play into this?”

“It doesn’t matter at all,” Patterson replied to a roar of disapproval from the packed PAC.

“Why didn’t they keep searching instead of saying they were going to leave and get a warrant?” asked a student who wondered why the police lied.

“The officers didn’t know more after their re-entry than they would have been able to do with a warrant, and when they re-entered they didn’t ask Mr. Ingala, ‘Can we come in. can we come in and search?'” Patterson said.

There was a moment of levity when one student asked Attorney Patterson, “Do you want to go to prom?”

A student asked the attorneys if they knew they wanted to be attorneys when they were in high school.

Attorney Sugrue said he hadn’t, but when he decided to become an attorney he knew he wanted to be part of the Appellate Court.

Attorney Patterson said she had loved social studies as a teenager and as a History Major in college.

“It seemed to me that I was less likely to spend my life as a poor person if I went to law school than if I went to journalism school,” Patterson said.

A student asked about the definition of “plain view” and probable cause.

Attorney Sugrue explained, “Plain view is the doctrine where if the police are lawfully in the position they are in and they see, feel or touch something, they can take that into consideration.”

Sugrue explained that a search warrant is required and must be signed by a judge based on probable cause or an exception to that requirement, including “exigent circumstances.”

“The general rule is plain view does not allow you to go into somebody’s house or back yard for the most part,” he said.

After the Appellate Court renders its decision, whichever party loses has the option of appealing to the State Supreme Court.

After the second case, a student asked the attorneys whether they get along outside court.

“The benefit of being in Connecticut and it being a small state is we see each other a lot,” said defendant’s attorney Richard Fennelly. “In New York they don’t have that type of relationship and civility with each other.”

A student asked if attorneys ever argue cases they don’t agree with.

Attorney Fennelly said, “That’s the beauty of it. You can’t take it personally. Sometimes there are people who walk in the door who I might not personally agree with. But my duty is to represent them to the best of my ability.”

Still, Fennelly said, “That does not mean you take on every case. But in terms of the person himself, that’s something we deal with all the time.”