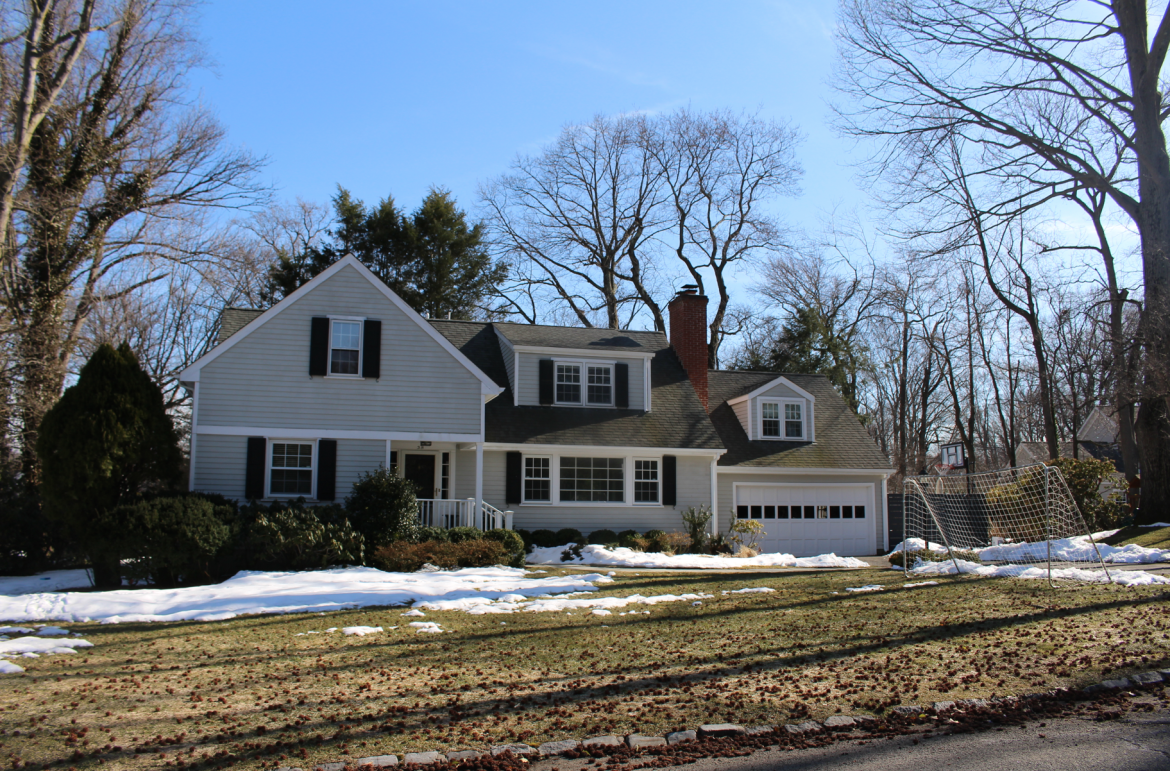 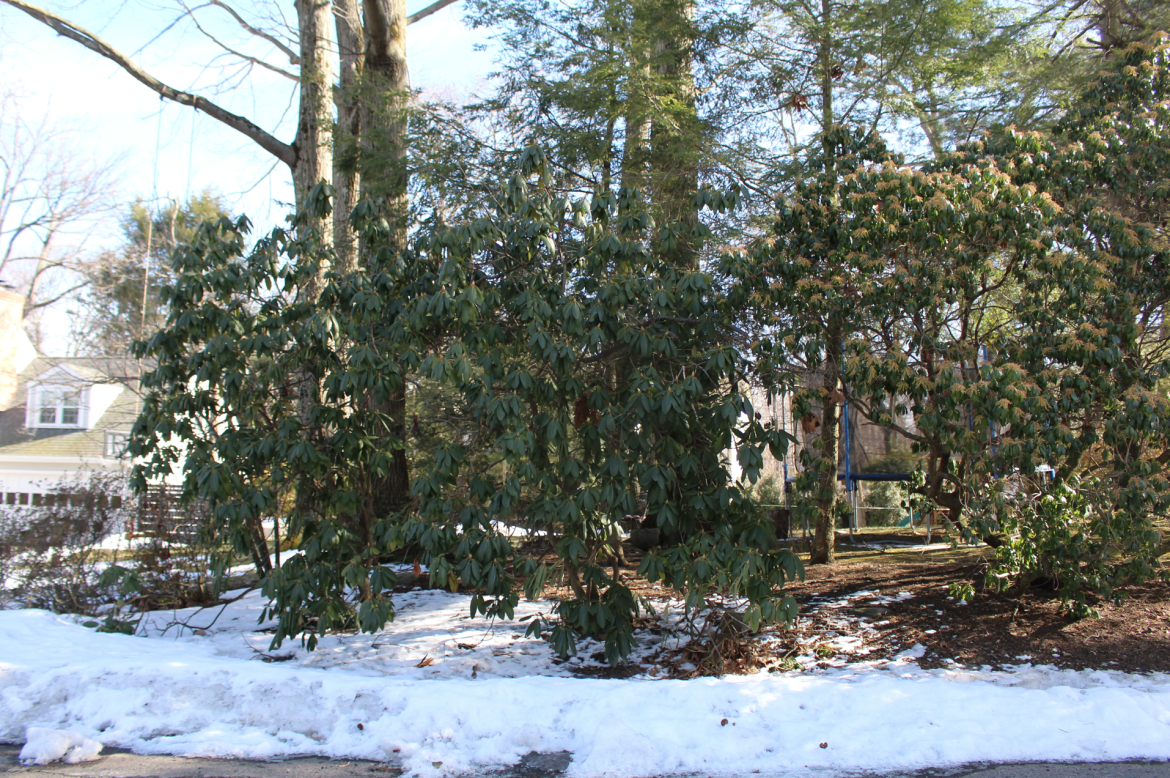 Updated March 26: On Thursday night the Zoning Board of Appeals rejected the Appeal of Leo Biagini for a variance for required lot area to permit the division of a lot located at 38 Hidden Brook Rd in the R-12 zone.

Original Story: Planning & Zoning Burns Midnight Oil on Controversial Hidden Brook Subdivision
It was getting close to midnight when attorney Thomas Heagney, representing the owners of 38 Hidden Brook Road in Riverside, the Biaginis, addressed the Planning and Zoning Commissioners.

Neighbors sat for hours waiting for the Hidden Brook agenda item #10 to have its turn, but each had a chance to speak after Mr. Heagney described the proposed subdivision and fielded questions from P&Z commissioners.

The proposed subdivision features two driveways and the demolition of the existing dwelling’s garage and relocation of its replacement to the other side. Heagney said he and engineer Mr. D’Andrea had ideas for ways to reduce the amount of grading and fill required, and offered that their client would agree to a conservation easement to the plan. (see green triangle in attached map presented on Tuesday night). 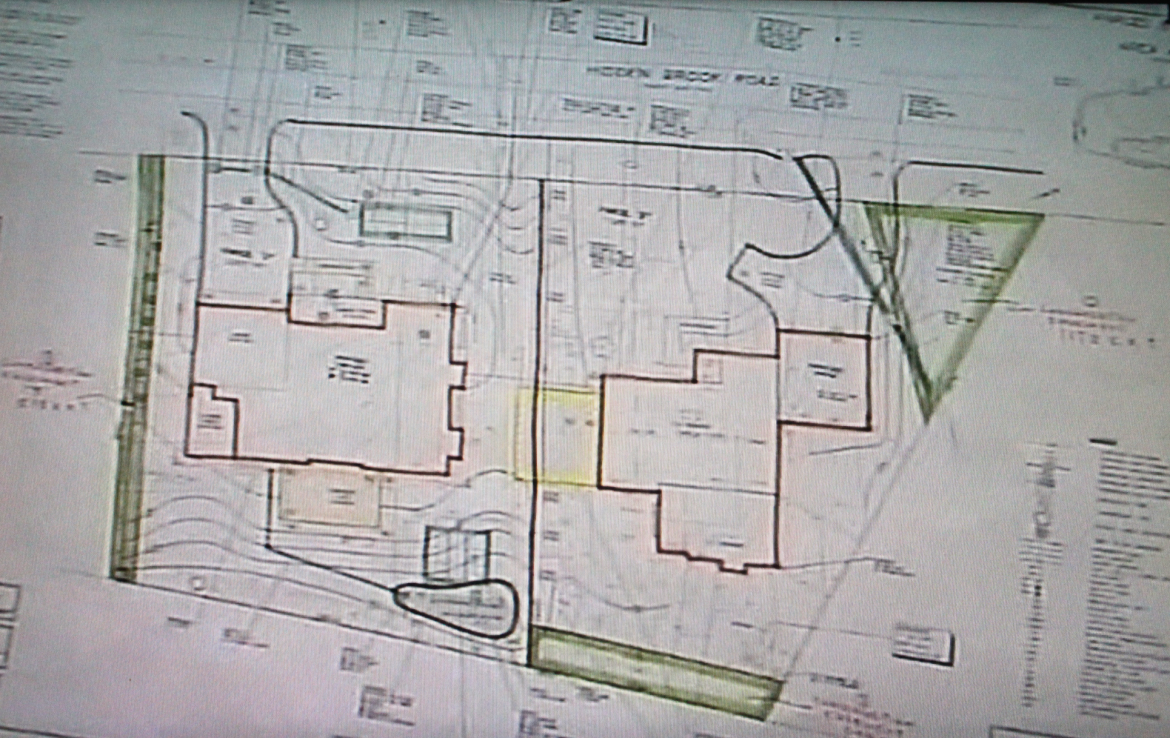 Commissioner Alban asked Mr. Heagney how the proposal was consistent with the POCD.

Mr. Heagney responded by saying there was a very small 61 sq ft of lot area the proposal was short. He said there are 21 parcels in the immediate area are smaller than the one his client is proposing.

“We have a set of rules…and this does not meet the minimum legal lot size,” Commissioner Ramer said. “It is contrary to our regs…The concept is supposed to be reducing nonconformity and a variance would be in support of continuing a reduction in nonconformity,” she said.

Attorney Heagney cited the example of a subdivision on Nicholas Ave in Glenville, but Mrs. Alban noted that the surrounding neighborhood and its character was already far more dense and comprised of multi-family homes. She asked for a more comparable example and pointed out the POCD’s emphasis on preserving a neighborhood’s character.

Mr. Heagney cited a property on Charles Street and another on Moshier Street, which had been denied by P&Z but okayed by the Zoning Board of Appeals (ZBA), but Ms. Alban again said those neighborhoods were  denser.

“When it’s just 61 sq feet in question, I don’t see why that’s not in keeping with the neighborhood,” Mr. Heagney argued, referring to the proposed conservation easement in the corner of the property as an offer of goodwill.

Mr. Heagney said the conservation easement and changes to grading that would result in less disturbance to the site as gestures. He said he had already filed an application for a variance with ZBA.

Walter Lorenz of 35 Hidden Brook Rd, directly across the street spoke against the subdivision. Lorenz himself received subdivision approval last year for his own lot, but pointed out that he left the requisite 15% open space.

“Clearly it doesn’t meet the regulations in terms of lot size,” he said. “The open space issue is big with me…This development jammed in there at under 12,000 sq ft with a 3′ ft retaining wall one one side, a 2′ ft retaining wall on the other side, and 19 trees cut down.”

“It’s at one of the highest points on Hidden Brook Road, so you’re going to have this house just sticking up on a plynth. I’m not sure what a conservation easement means for the people on the street. I know what open space means, and I urge the commission to reject the application and not take it down the road to ZBA.” – Walter Lorenz of 35 Hidden Brook on proposed subdivision at 38 Hidden Brook

Curt Jomo who lives at 27 Willow Rd behind 38 Hidden Brook also spoke against the proposed subdivision.

“This is an open lot on high ground with open space with a number of heritage trees, all of which are proposed to be cut down,” Mr. Jomo said, adding that in addition to eliminating the open space, with zero open space and, in fact, a 61 sq ft shortall 29 neighboring families had submitted a petition from 29 families against the proposed subdivision. He described the petition as a remarkable statement on how the neighborhood feels on the potential change to the character of the neighborhood.

Mr. Jomo said he’d been at the IWW discussion the previous evening, and that the proposal, with its absence of open space, hadn’t necessarily sailed smoothly, triggering the offer of the conservation easement form Mr. Heagney’s clients.

Craig Picket of 50 Hidden Brook listed there are three reasons to decline the proposal. One is the void of open space that would result. Second, the proposal’s shortfall of 61 sq ft, and lastly, the issue of wetlands on adjoining property where the garage and driveway are proposed.

“I ask you to do the right thing and be consistent with our vision as a neighborhood and community,” Mr. Picket said. “Mr. Heagney’s depiction of the Hidden Brook is inaccurate. The lots on Hidden Brook are larger as you move toward the water, and smaller as you move closer to the Railroad and highway,” he said. “To say there are all these lots that are smaller and non conforming is not the case.”

“If I was here to protest change I would have been here a year ago. This has been a real lightning rod in the neighborhood,” she said, adding that more neighbors would have been in attendance but that it was school break for many families.

Asked to point out wetlands on the map of the property, Mr. Heagney said there is in fact a hidden brook on the property.

“It comes from the north side of the road and exits adjacent to a head wall on 38 Hidden Brook, and then goes south and east,” Mr. Heagney said.

Mr. Jomo returned to the microphone to say that at the previous night, the Wetlands commission approved a conceptual subdivision, but clearly stated the garage proposed on the side of the property would not be approved unless redesigned. He said there had been talk of a single shared driveway instead of two separate driveways.

Since the subdivision would result in a non conforming lot, it must go before ZBA for variance.  P&Z chose to leave the applicaiton open while the applicant goes to ZBA. Two P&Z commissioners supported the subdivision (Maitland, Brooks) and three did not (Ramer, Macri and Alban).

While the Planning and Zoning commissioners were split in opinion on the subdivision, the application will nevertheless go before the Zoning Board of Appeals on Wednesday night and remain an open item with P&Z.