Architects presented the educational specs for the New Lebanon School project at Thurday’s Board of Selectmen meeting. Michael Tribe and Peter Gisolfi of Peter Gisolfi Associates joined Ben Branyan, School Dir. of Operations, at the mic. The trio fielded questions from the selectmen, and at times members of the Board of Education and Superintendent, principal of New Lebanon School and Town attorneys were all called upon for answers.

The project will require the Selectmen to grant Municipal Improvement status before proceeding to Planning & Zoning Dept, which did not happen on Thursday.

However, the Selectmen did vote to approve the Board of Education application  for the state grants for school construction, moving the application along to the RTM.

Mr. Branyan was in the unique position of presenting to his future boss, First Selectman Peter Tesei, while still working alongside his current boss, Schools Superintendent McKersie. Branyan he will become town administrator on June 1 and move from the Havemeyer building to Town Hall.

The trio of Branyan and the architects presented plans for a new school, focusing primarily on “Scheme C,” which would spare the playing field that many in the community refer to as the Town Green, and create an entirely new school rather than a renovation of a sub par and dated building. The architects estimated the project price tag at about $31 million, but the presenters were all optimistic that the potential for state funding might be higher than 80% considering the new school works toward solving a nagging racial imbalance at the school. The state proscribes the racial balance formula.

The existing New Lebanon School is a mere 37,000 sq ft and has an enrollment of 262. The plan mapped out by the architects in Scheme C emerged last November as the preferred scenario among the school community.

Whereas Scheme A meant an addition to the existing building and scheme B would have meant sacrificing the ball field, Scheme C  would result in a spacious new freestanding school in the ravine behind the existing school. 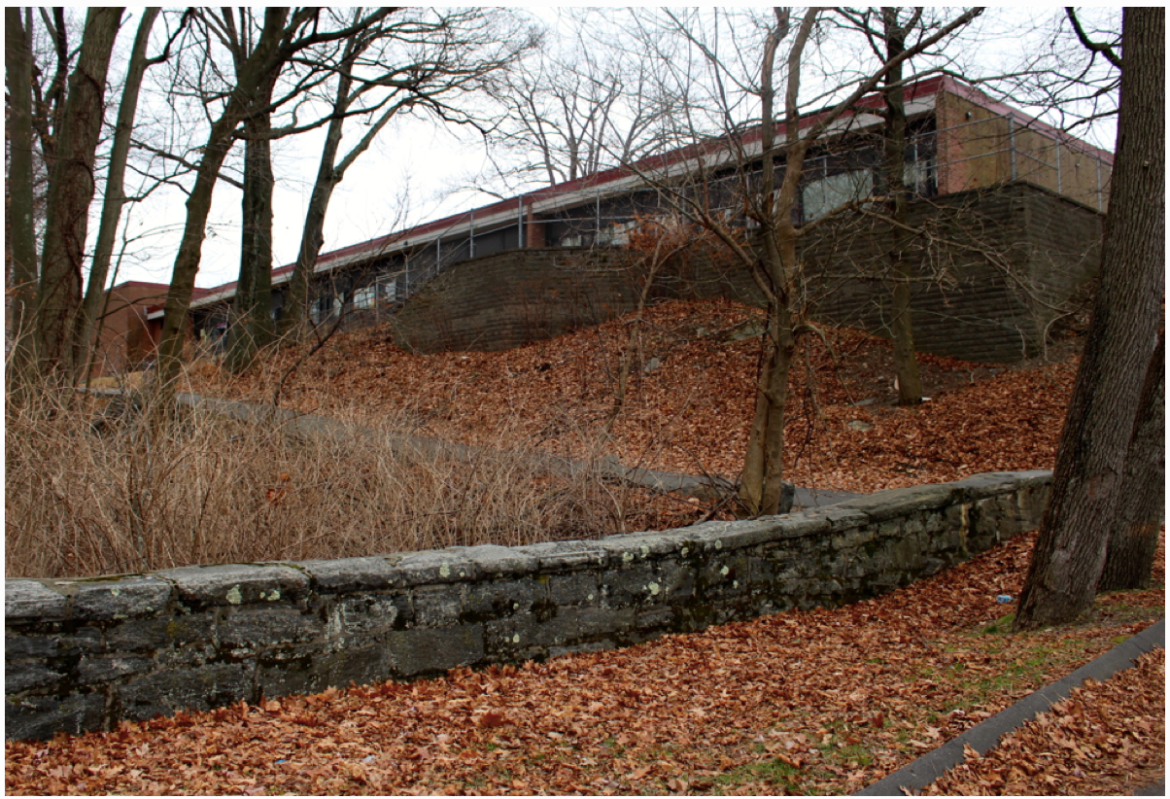 Partial view ravine at the back of New Leb School. Credit: Leslie Yager 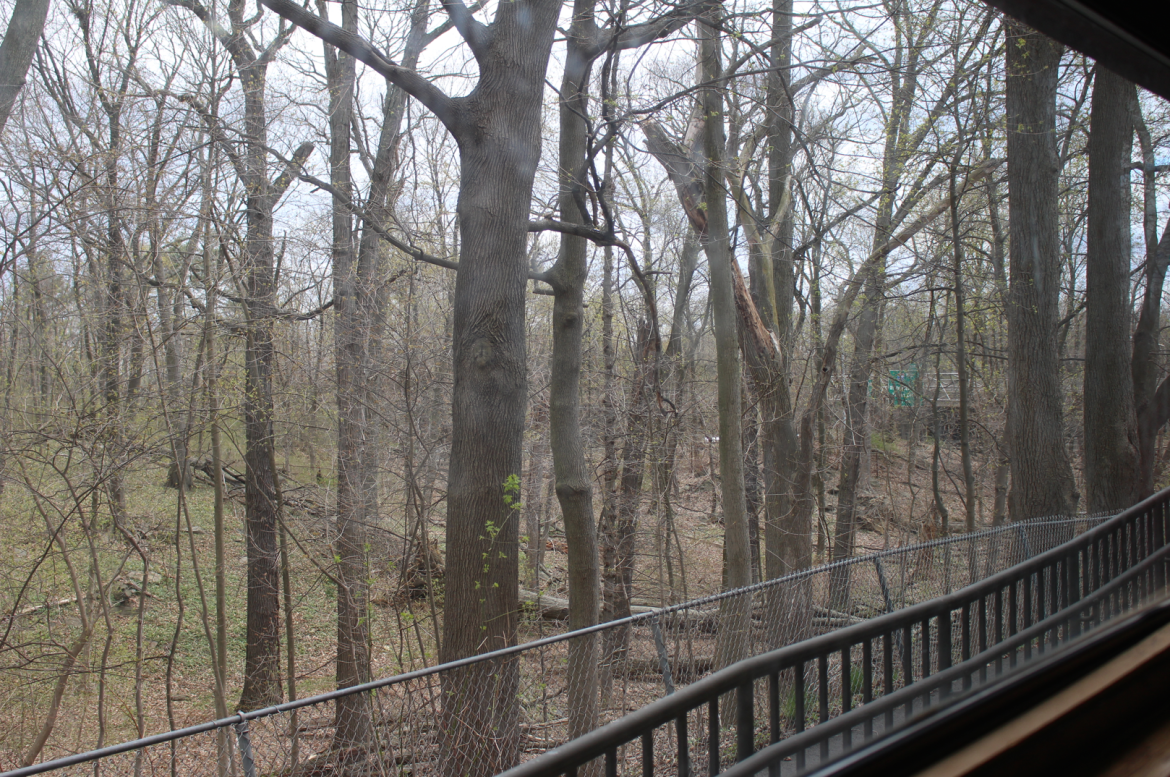 View of the ravine from the window of the existing New Lebanon School gymnasium. In background, note the green sign on I-95 for exit 2 southbound. Credit: Leslie Yager 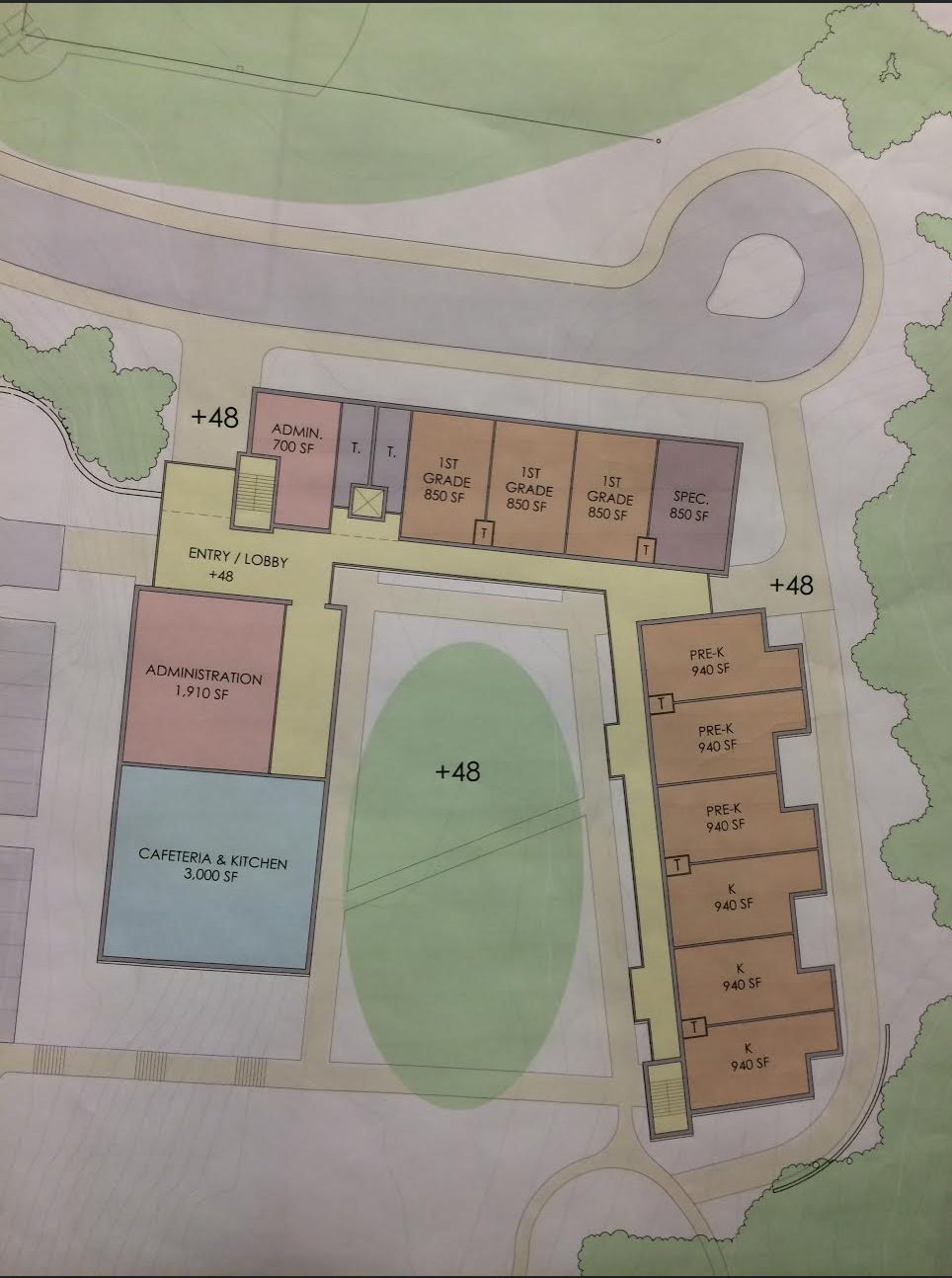 Mr. Tesei asked about the possibly relocating the school population to Parkway school during construction. Parkway school’s enrollment has dipped significantly, and there is room to accommodate a number of additional students. However, that option would mean imposing a 40 minute school bus ride imposed on a population that prizes walking to school.

Barbara Riccio, principal of New Lebanon School, emphasized that an alternate site such as Parkway wasn’t necessary as that the bulk of heavy construction would take place during summer months.

For years, Riccio and the New Lebanon community have been nothing if not flexible in a less than ideal situation, which includes the achievement gap challenge, overcrowding and racial imbalance.

Due to overcrowding, the current New Lebanon kindergarten classes are being housed offsite at the Byram Archibald Neighborhood Center “BANC,” a windowless former candy factory that has also served as a Masonic Temple. At BANC, professional staff are working out of former closets. On a daily basis, students move back and forth across the street from New Lebanon to the BANC satellite. Every afternoon about 65 children in grades K-3 are collected in person from New Lebanon School by a team of 10 staff from the after school program which  runs until 5:30pm. The children are walked in rows of buddy pairs across Delavan Ave to BANC. 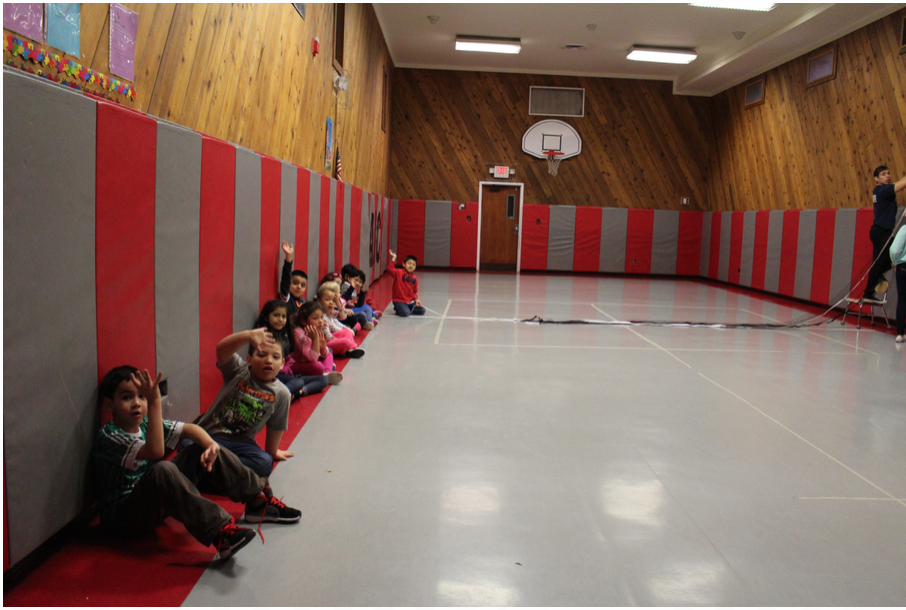 Gymnasium at the Byram Archibald Neighborhood Center,where current New Lebanon School kindergarten has its classes, but not its specials. About 65 students in grades K-3 are walked by staff from new Leb to BANC every afternoon. For many kindergarteners this represents the second daily trip across Delavan Ave to BANC. Credit: Leslie Yager

When there was a question about safety in locating a new school even closer to I95, specifically intruder situations, Superintendent McKersie assured the Selectmen that there was strong collaboration with local Police and compliance with national standards for safety.

Another concern was whether Planning and Zoning might reject Scheme C and dictate an alternative. Greenwich Town Attorney John Wayne Fox, who briefly consulted his colleague John Wetmore before replying that in their opinion that Planning and Zoning didn’t have that authority.

When it came to decision time, the Board of Selectmen agreed they were averse to granting MI status until environmental tests are complete.  Preliminary environmental assessment have revealed the presence of arsenic. Portions of the site have been fenced off pending remediation. Also, the First Selectmen reminded the audience that the standard procedure is to entertain a proposal at one meeting, and vote at subsequent meeting. They agreed to hold the MI decision for Mid-May.

The selectmen did vote in favor of advancing the application to the RTM for state of Connecticut Services in order to be eligible for a school construction grant. 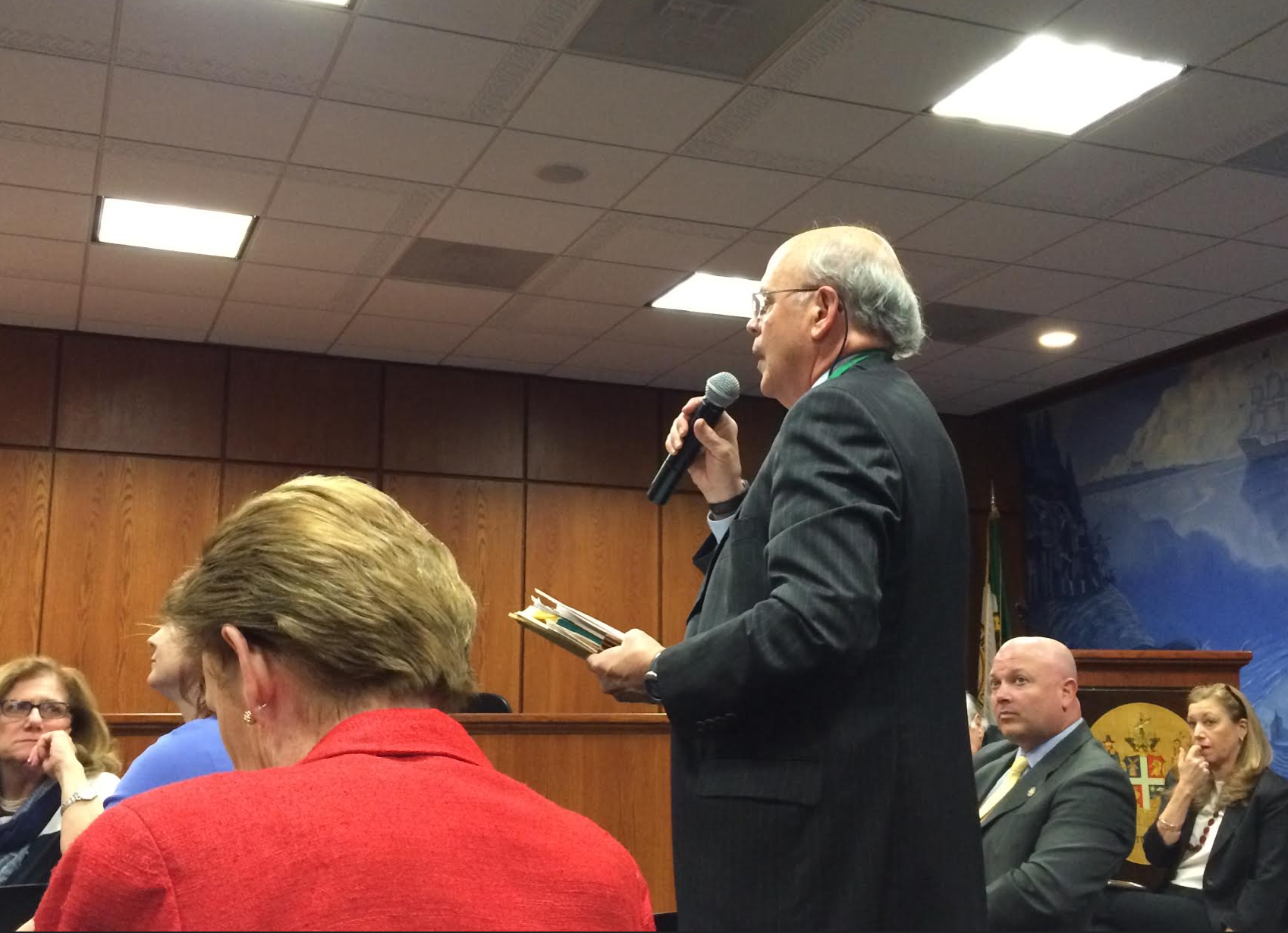 In the mean time, Mr. Tesei requested a visit to the proposed construction site, but was concerned that would constitute a meeting. Attorney Fox joked that it might indeed be construed by the Freedom of Information Commission as such. It was agreed that a visit would be scheduled, billed as a meeting and open to interested parties to attend.

First Selectman Tesei complimented New Lebanon’s principal, Barbara Riccio on her fortitude and flexibility in what has been a long road toward a new school. Along the route to replacing the building with its teeny-tiny cafeteria and gymnasium, the school has been cited by the state for racial imbalance and struggled with narrowing the achievement gap.

The proposed New Lebanon Elementary School aims to attract students from the entire town who are interested in an International Baccalaureate (IB) education. The facility must be sized to accept the larger enrollment from the catchment area, add space for magnet students, and add classrooms to restore the pre-kindergarten program. 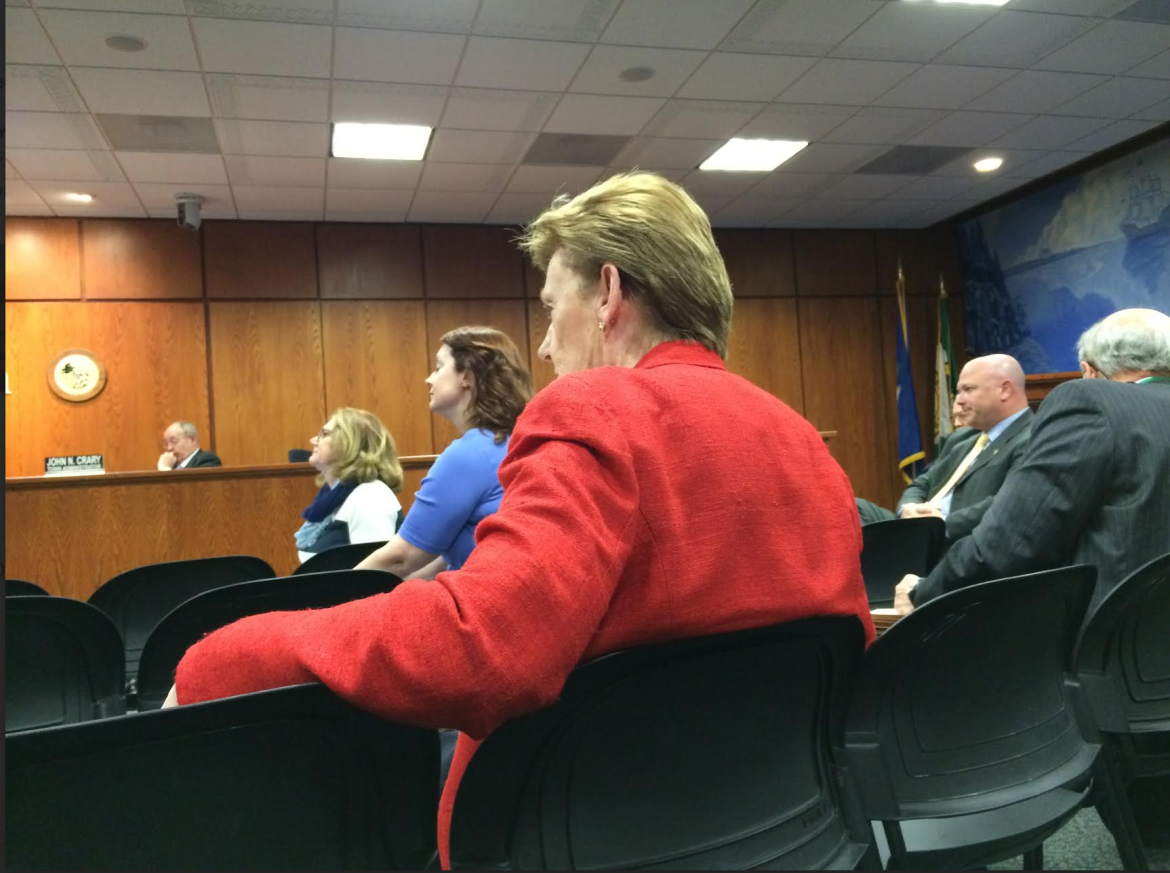 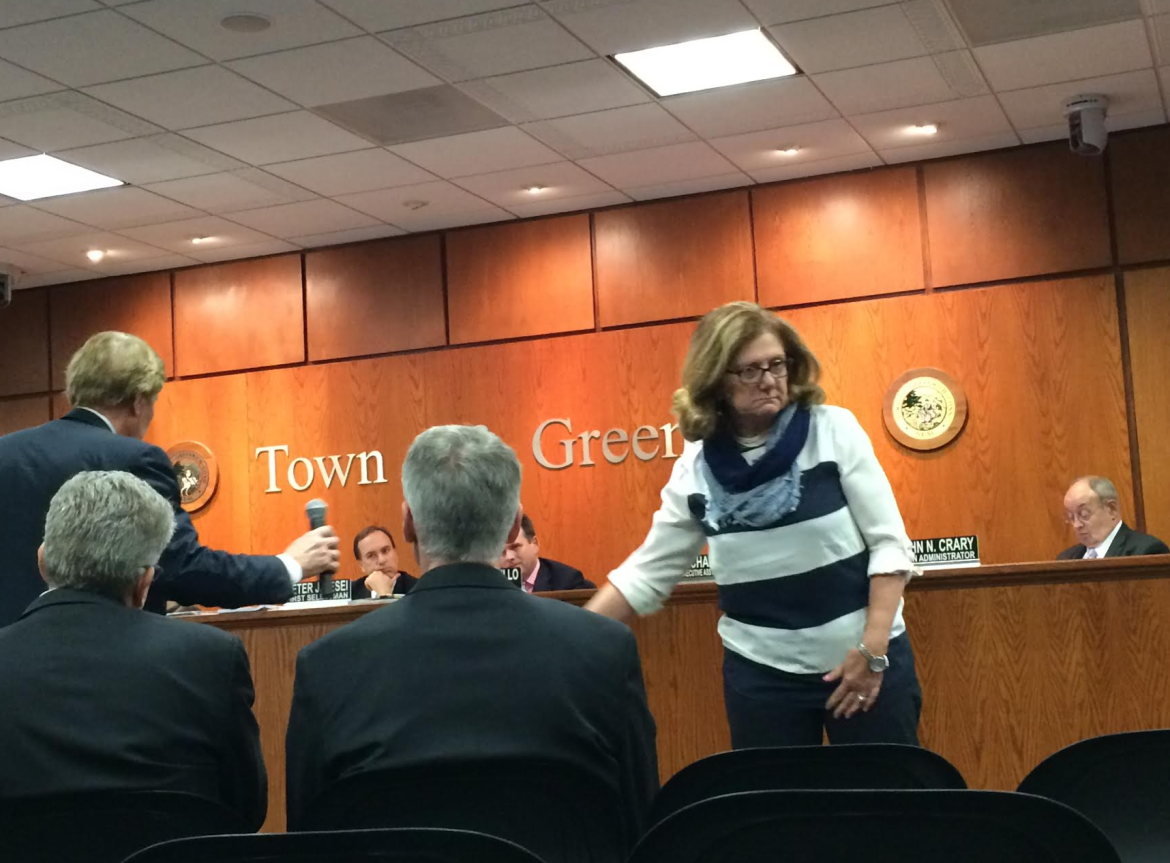 The Board of Selectmen directed questions about the New Lebanon School proposal to Peter Grisolfi Associates architects, Mr. Grosolfi and Mr Tribe. There was input from the Schools Superintendent Bill McKersie, and New Lebaon School Barbara Riccio. Credit: Leslie Yager