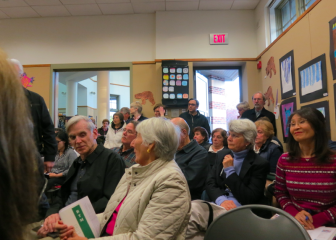 By Leslie Yager
The community room at Cos Cob Library was packed to the gills and a standing room crowd overflowed into the library’s front room, eventually filling the doorway of the exit and the landing outside.

Once a microphone was activated, Diane Fox, Greenwich Town Planner, discussed the top priorities in the Cos Cob Neighborhood Plan (available on the Town’s website ). “Obviously we need a larger community room in Cos Cob,” Fox said, kicking off her remarks. 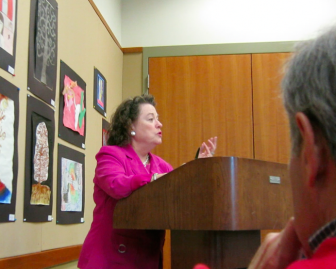 Fox, who lauded Peter Berg for performing what she described as yeoman’s work on the Cos Cob Neighborhood Plan, said that comments on the plan will be included in an addendum and that residents should email comments to: [email protected]

Fox said a strong Cos Cob Association is critical to seeing action on the items in the plan. Friends of the Library, Merchants Association, Cos Cob Association and RTM district leaders all need to be grouped together “to make a push to the appropriate departments and agencies to act on the recommendations in this plan,” she said, likening the situation to previous efforts in Byram. “You want your government to work from the ground up, not the top down, which requires an organized approach.”

Fox dedicated much of her allotted time to reviewing Cos Cob’s Environmental Issues, which are are one of five priority areas for action in the plan.

Mill Pond Dredging. Fox said the good news is that Cos Cob Harbor is going to be dredged. However, she said that although dredging of the Mill Pond might be good from an environmental standpoint, “you have to dredge for the right reasons.”  DPW, she said, objects to dredging Mill Pond from a standpoint of flood control, and that because there is salt water incursion – fresh water and salt water combined – the Army Corps of Engineers would need to become involved.

Strickland Park. Parks & Rec and Bruce Spaman, Superintendent of Parks and Trees Department are overseeing a plan and design of Strickland Park. Fox said the design is not finalized, and that there is a good opportunity for community to become involved. She said there is the park might become more of a focal point for the community for activities or recreational events, but that there are parts of the park that are currently blocked off by plantings and bushes. She said that residents should share their input with Mr. Spaman.

Fox next noted that the Town has a 10’ easement behind the Cos Cob Starbucks building. “We approached the President of Starbucks via a letter from First Selectman Peter Tesei, asking them to participate in an ‘opportunity’ to enhance the property using the 10’ to connect from the Post Road, behind the building and into the park area.”

“Unfortunately Peter Tesei’s letter did not result in an outstanding cheer from the President of Starbucks,” Fox said. But as the Town does have the easement and, though it does involve wetlands, she said there is an opportunity for a walkway along that area.

“Educationally speaking, particularly for children at Cos Cob School and Central Middle School, this gives an opportunity for children to understand the tidal effects and salt water effects and a chance to learn about flora and fauna,” Fox said.

Public Waterfront Access Along Mill Pond, River Rd, Cos Cob Park and Strickland Rd. Fox said that in the recent Survey Monkey online survey, residents indicated they want more access to the waterfront. She explained that the Town’s P&Z policy is to require 10’ easement from every project submitted along River Rd, with an eye to the DPW’s design for a pedestrian/bike path from the Post Rd (At River Rd and at Mead Ave), down Strickland to the Train Station and the new Power Plant Park site.

Flooding Issues. Fox said when coastal flood tide comes in, there are well known flooding issues in the built-up areas of Cos Cob, but that problem-solving has to start upstream, said Fox.

“There is only a certain capacity for retention in this area,” she said. “A lot of it is related to development pressures, but is also related to storm issues.” She described the challenge as a long term project that DPW is having consultants work on. “It could take 20 years,” she said.

Protection of Coastal Resources. “Now that we have a Harbor Management Commission, we need a harbor management plan,” Fox said. She urged the community get involved and monitor the plan as it is developed, with an eye to moorings and dredging. The commission meets the third Wednesday of the month.