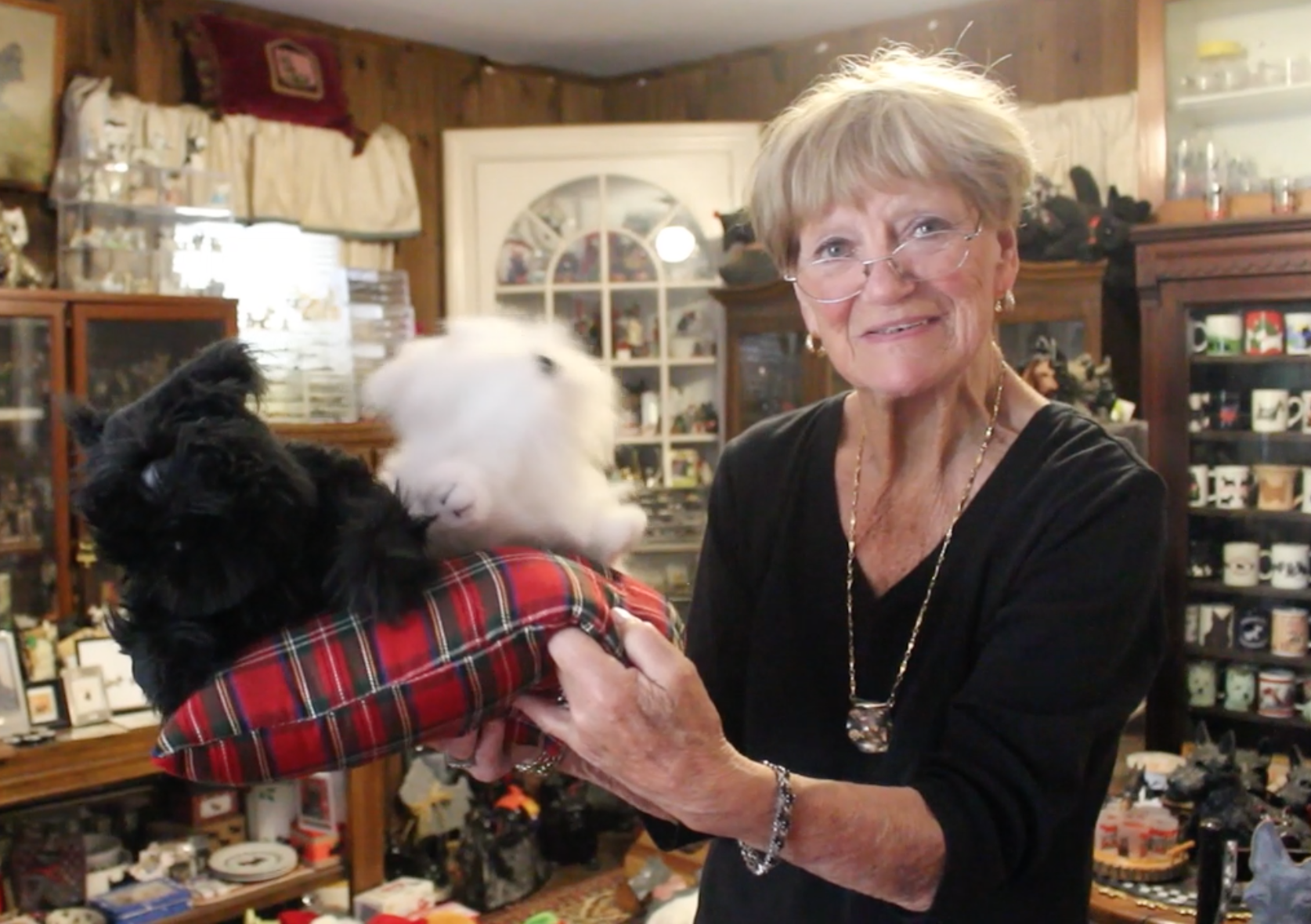 Carolyn Antonik in her home where she enjoys her extensive collection of all-things Scotty dog. July 11, 2016 Credit: Leslie Yager

Carolyn Antonik is glad that the Town of Greenwich will take over the care of the historic cemeteries adjacent to her home in Byram. In fact, the Antonik house is a living piece of history itself. 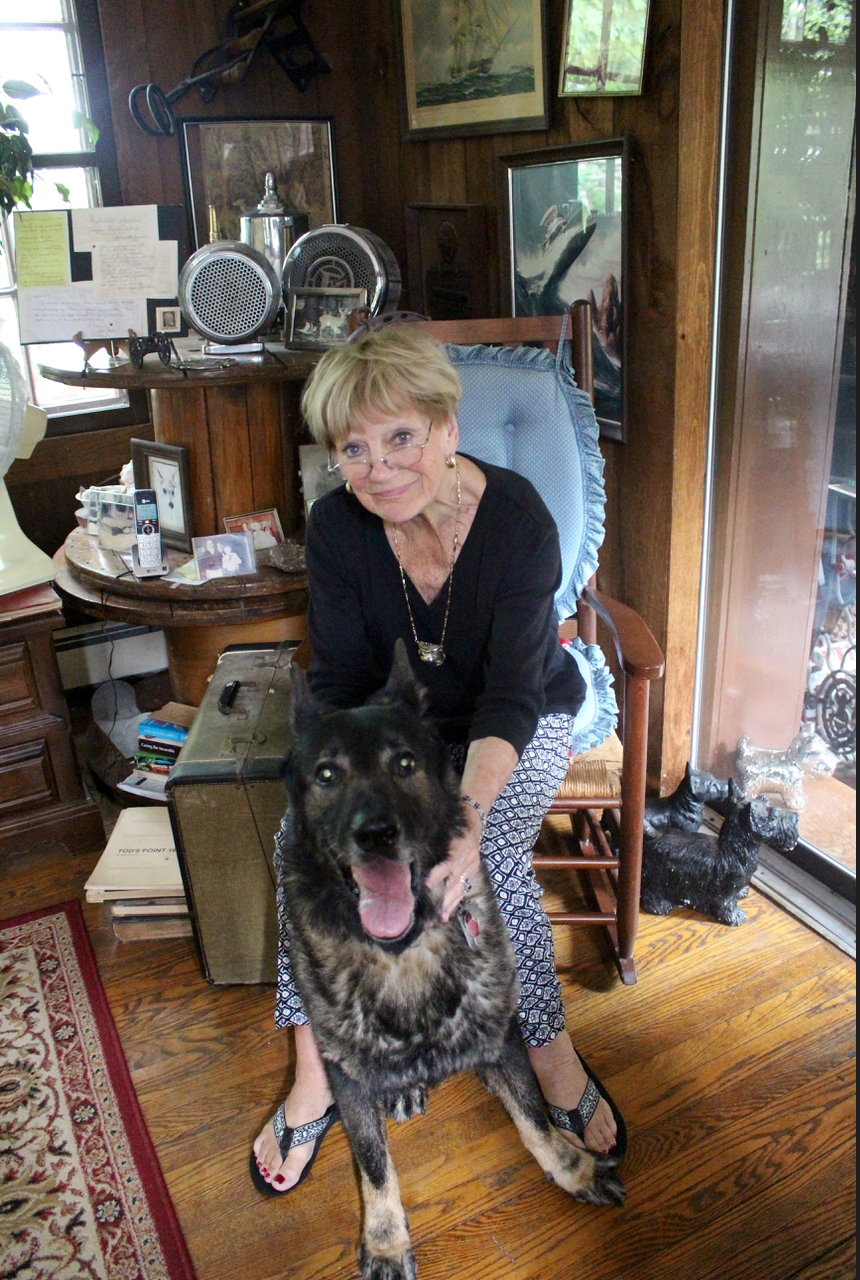 Though it has a historic plaque dating it to 1750, Carolyn, who has lived there for 50 years, said she believes the home dates back to 1690.

Adjacent to historic cemeteries and Byram Park, the house is situated on sloping terrain that descends to the beach, marina and Long Island Sound.

The property has lovely views from back of the house where a basement dining room has its massive original stone fire place and a thick fieldstone foundation. The finished lower level is delightfully cool on a hot summer day, and Carolyn said the original owners did all their cooking in that fireplace. In fact, in the summer Carolyn spends most of the day down in the lower level, which opens onto a sprawling yard, and benefits from the water views.

Around the side of the house, past massive rock outcroppings, are the three historic cemeteries that were the subject of an agenda item before the Planning & Zoning Commission on July 6. 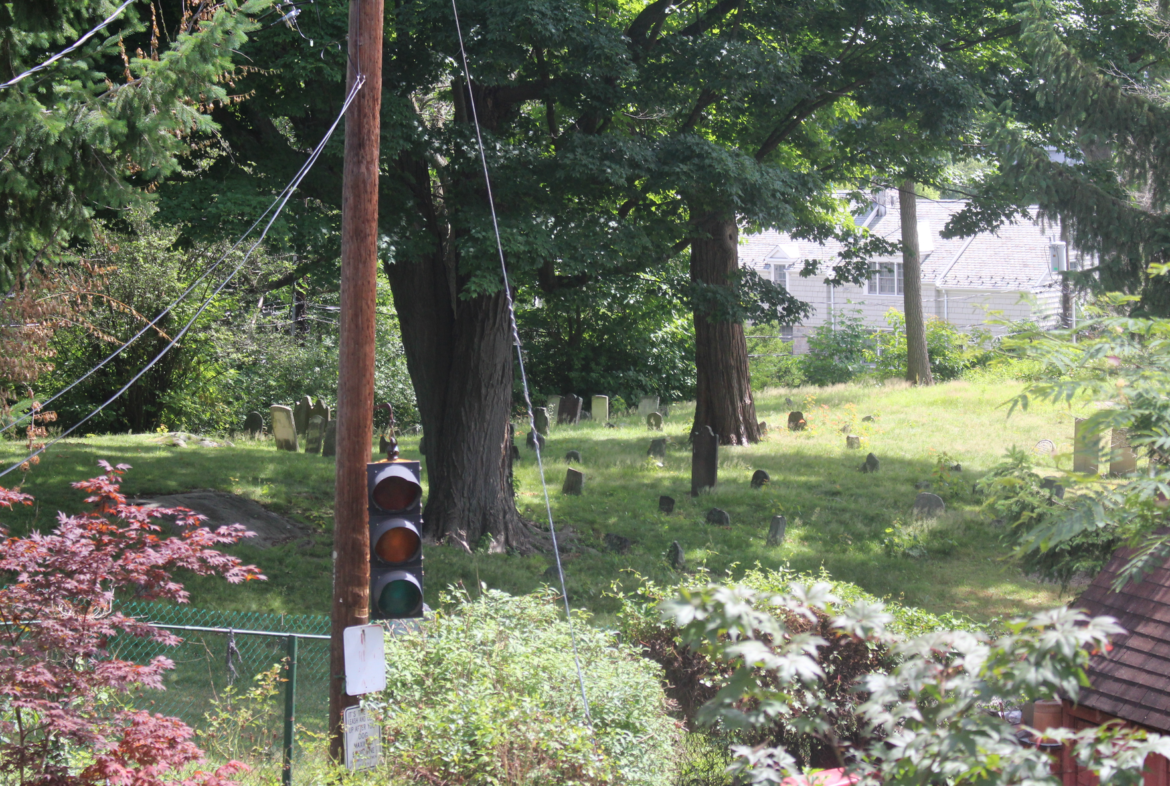 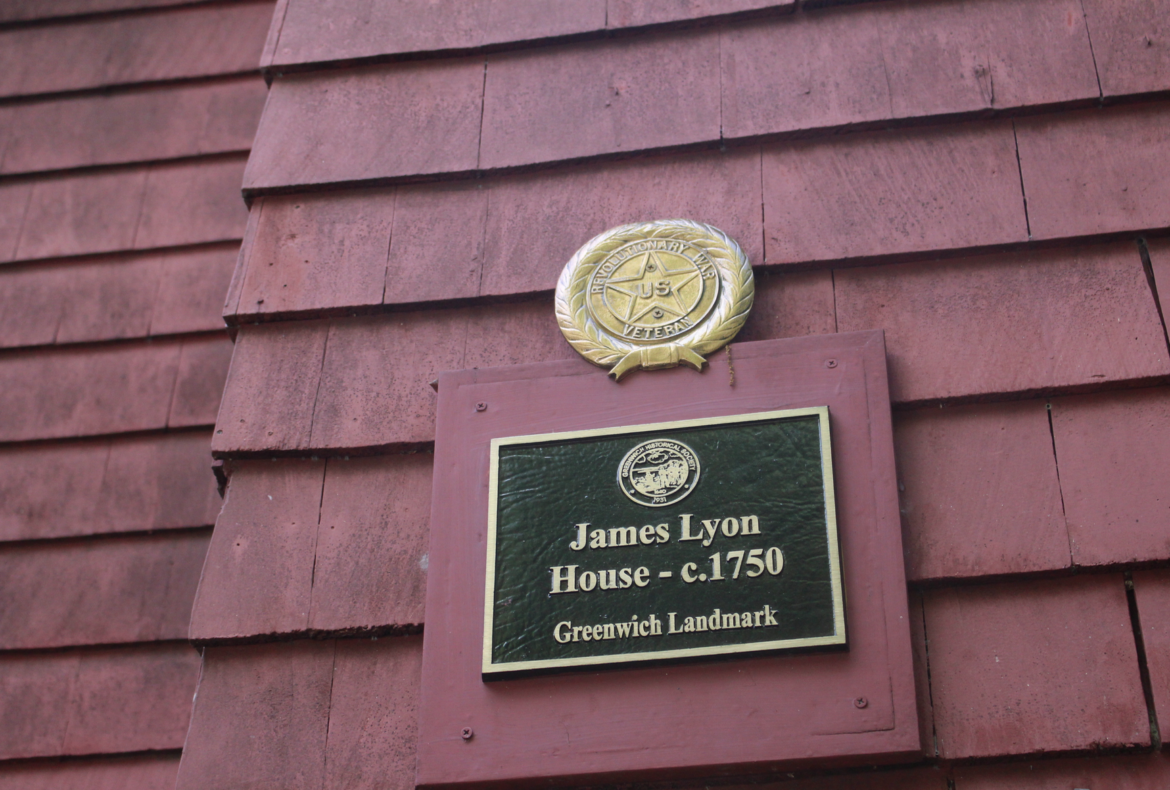 Earlier this month, the Planning & Zoning commission voted to approve a Municipal Improvement for the Town to acquire the three cemeteries – Byram Cemetery, Lyon Cemetery, and the Byram African-American Cemetery – on the grounds that they represent historical and archaeological resources and require maintenance and care.  There had been no clear ownership before, and the cemeteries benefited from no formal protection.

Carolyn, who appeared in person to address the commissioners on July 6, said her late husband Chris had mowed and tended to the weeds in the expansive cemeteries for 30 years.

Chris Antonik also tended to the traffic island at the intersection of Byram Shore Rd and Byram Dock Street, and was honored by Greenwich Green & Clean for doing so.

Carolyn said it broke her heart to see the weeds invade the cemetery she loves and associates with her late husband.

She recalled how after he passed, the family dog, an 11-year-old Czechoslovakian Shepherd named Bruno, went with her to play fetch in the cemetery as he had many times before.

“He refused to run and fetch the stick,” she said. “He zig-zagged around the headstones. He was sniffing. He could smell Chris. He was looking for him,” she said.

As she is not in a position to undertake the landscaping work herself, Carolyn has been fretting about the care of the cemeteries she loves.

She is also worried about one particular cable wire that spans the width of the cemetery, dipping dangerously low.

“Someone tall could get it right across the neck,” she warned. 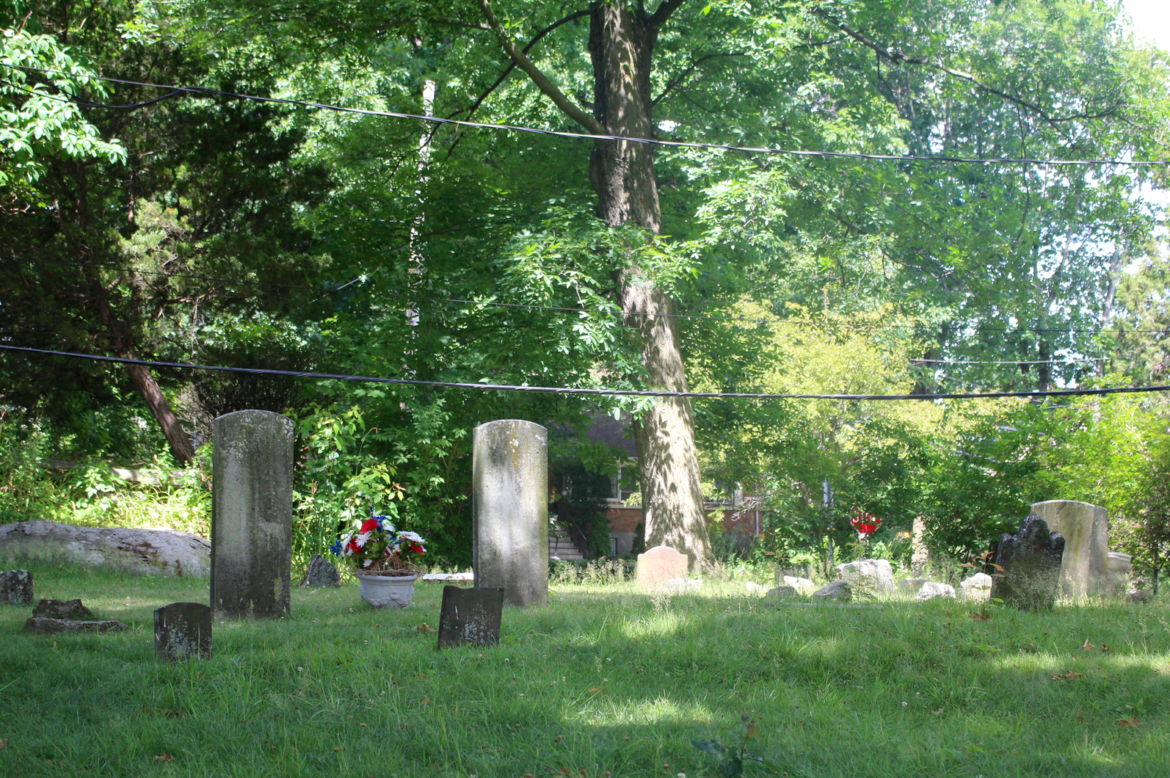 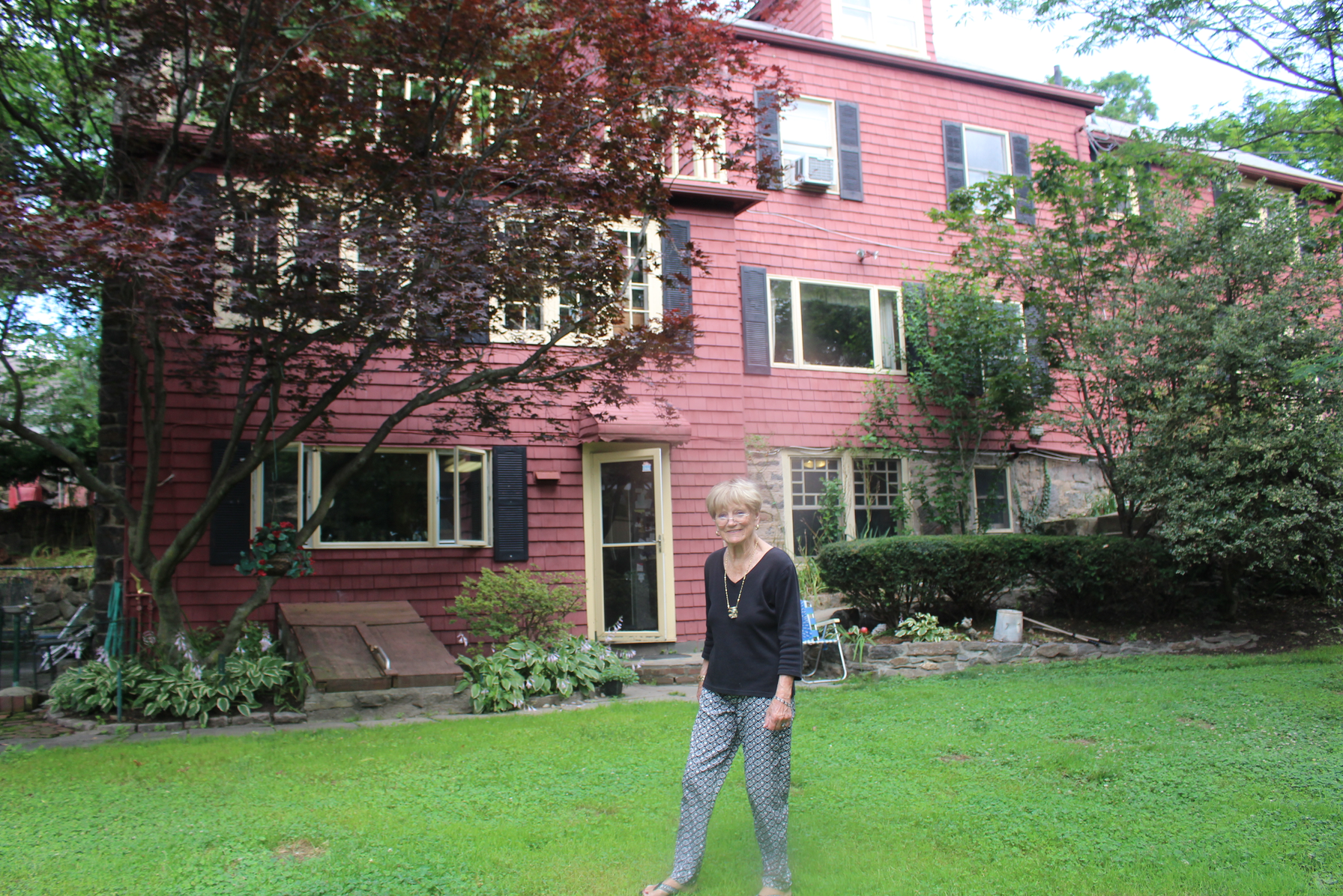 Carolyn Antonik in her back yard in Byram. Credit: Leslie Yager

“It wasn’t his property,” she said, adding that Mr. Antonik had worked for the parks Dept for a time, enjoyed landscaping and appreciated the area’s natural beauty.

“He respected the history of the landscape,” Hull said. Greenwich Green & Clean’s goal is to find individuals who like to improve the Town and make it both beautiful and loved. “They commit to their neighborhood because they care – without saying ‘Not My Job,'” Hull said emphatically.

“There isn’t enough money to pay for the kind of care you give in your own back yard,” Hull said, adding that when a resident spends five extra minutes in a traffic circle or mowing alongside of the road makes all the difference. “People can walk, jog or walk their dogs, and go along unimpeded – especially when there isn’t a sidewalk.”

Of Chris Antonik and his widow Carolyn, Mrs. Hull described them both as incredibly committed to both the traffic island and the cemeteries. “They saw the importance of them both historically and aesthetically,” she said. 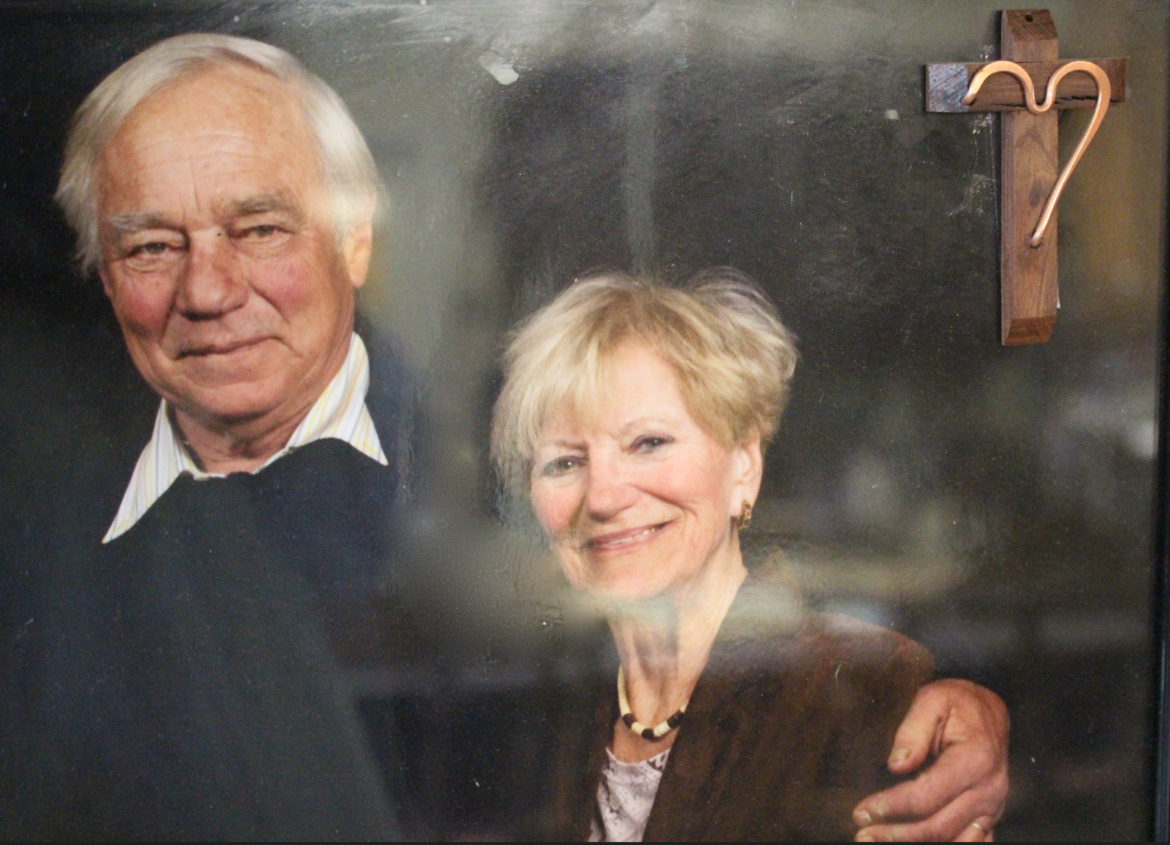 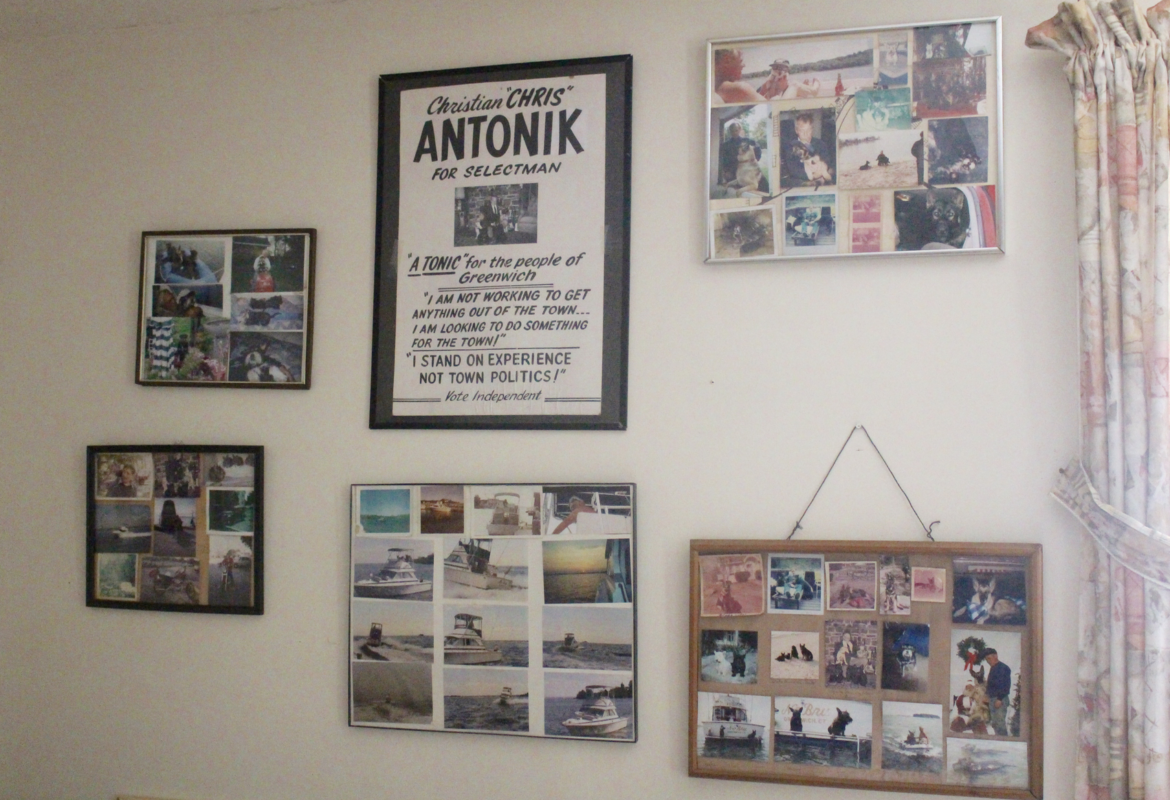 Mr. Antonik, who died on January 29, 2015, and Carolyn were also known for their many pets.

For dogs, they favored Scotties, West Highland White Terriers, and Czech Sheperds, but they also had a menagerie that included cats, parrots and even a pet deer. 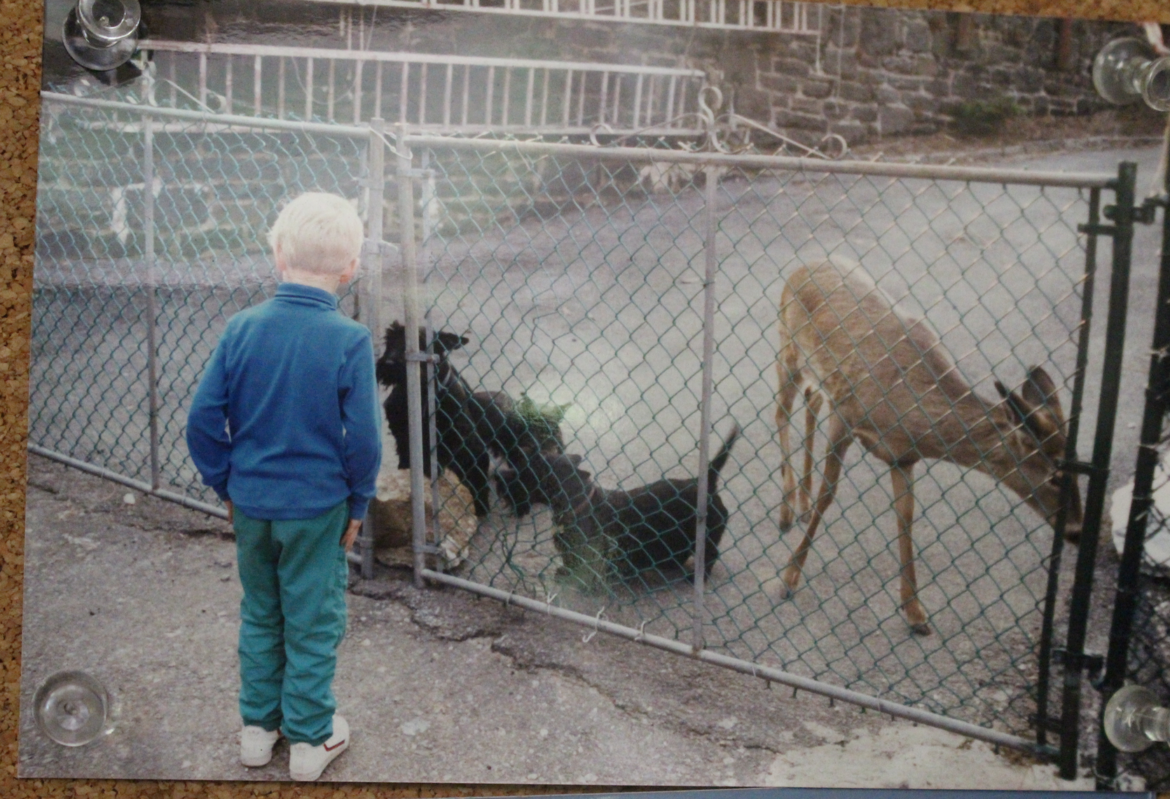 Antonik photo of Scotty dogs and pet deer fenced inside a portion of the long family driveway in Byram. July 11, 2016 Credit: Leslie Yager 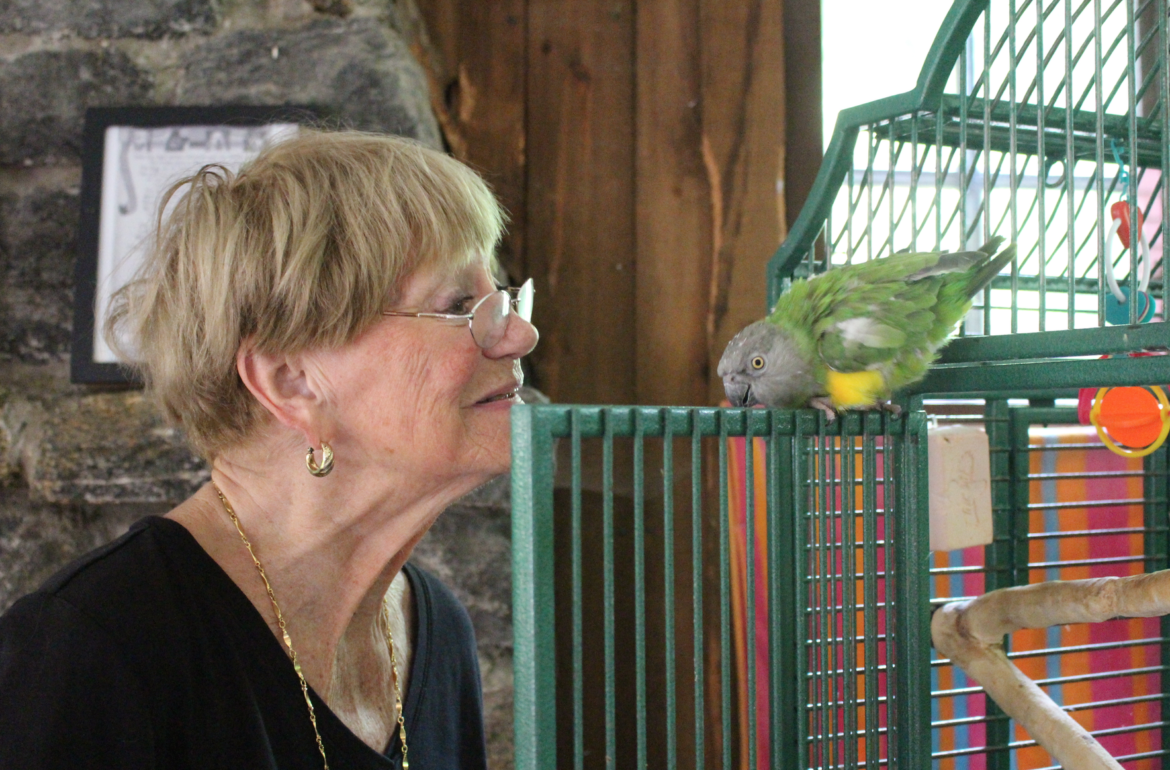 Carolyn recalled the week a black squirrel occupied the house. “He ran around the house all day, and he got along with all the dogs and cats,” she said, gesturing to the expanse of original wide plank floors in the living room where dogs, cats and squirrel had played.

“But we were planning a party and we felt we should have him leave before guests arrived.” Carolyn said the couple used a Have-a-Heart trap to engage the squirrel in a gracious exit.

The historic red house with its proud plaque, and impressive wide plank floors, is home to Carolyn’s extensive collection of everything-Scottie.

Carolyn and Chris, who raised her three children from a previous marriage – a son and two daughters – were married 42 years.

Carolyn said she would organize treasure hunts in the cemetery and under the ancient Sassafras tree for her children’s birthday parties when they were young.

“I’m very pleased the Town is taking over the care of the cemeteries,” she said. “I don’t like seeing the weeds and the grass needing to be cut. My husband replaced many parts on his lawn mower and weed whacker — going around every headstone.” 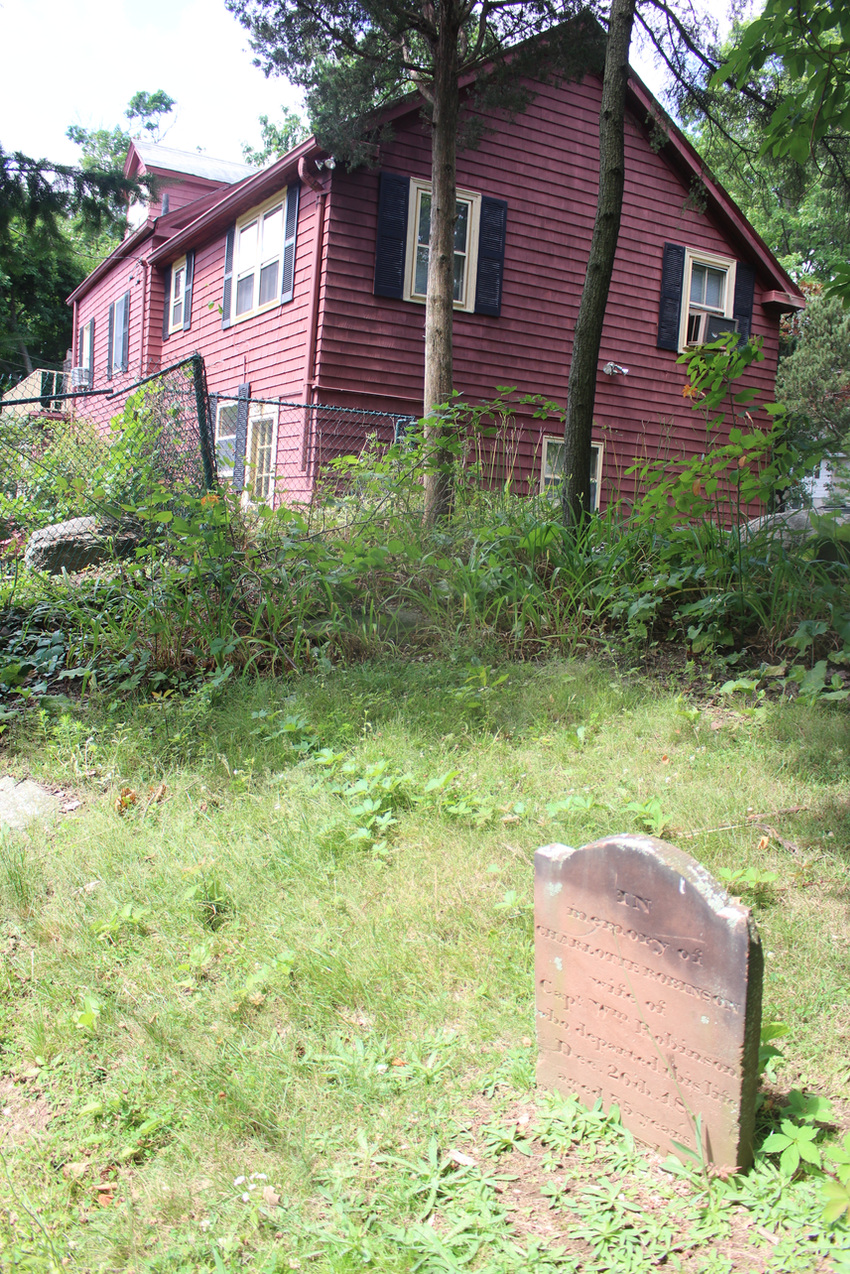 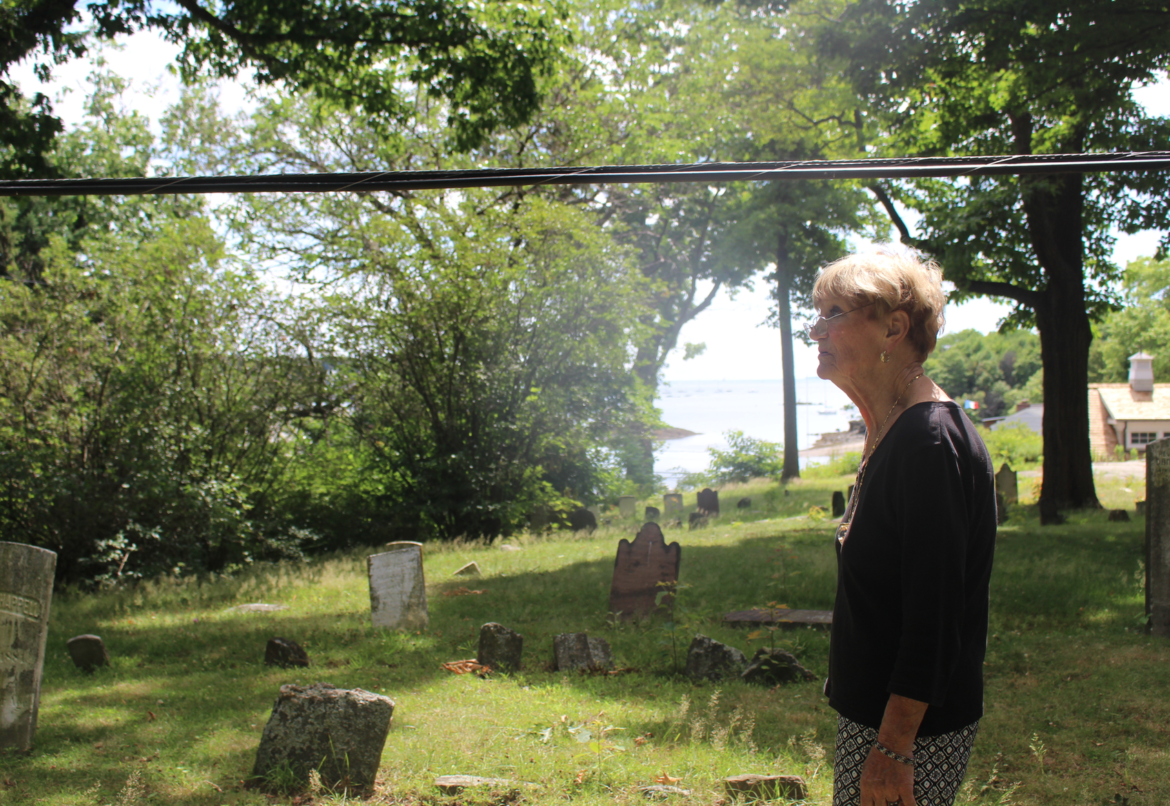 Carolyn Antonik is concerned about the massive cable that spans the cemetery next to her home at on Byram Shore Road. July 11, 2016 Credit: Leslie Yager 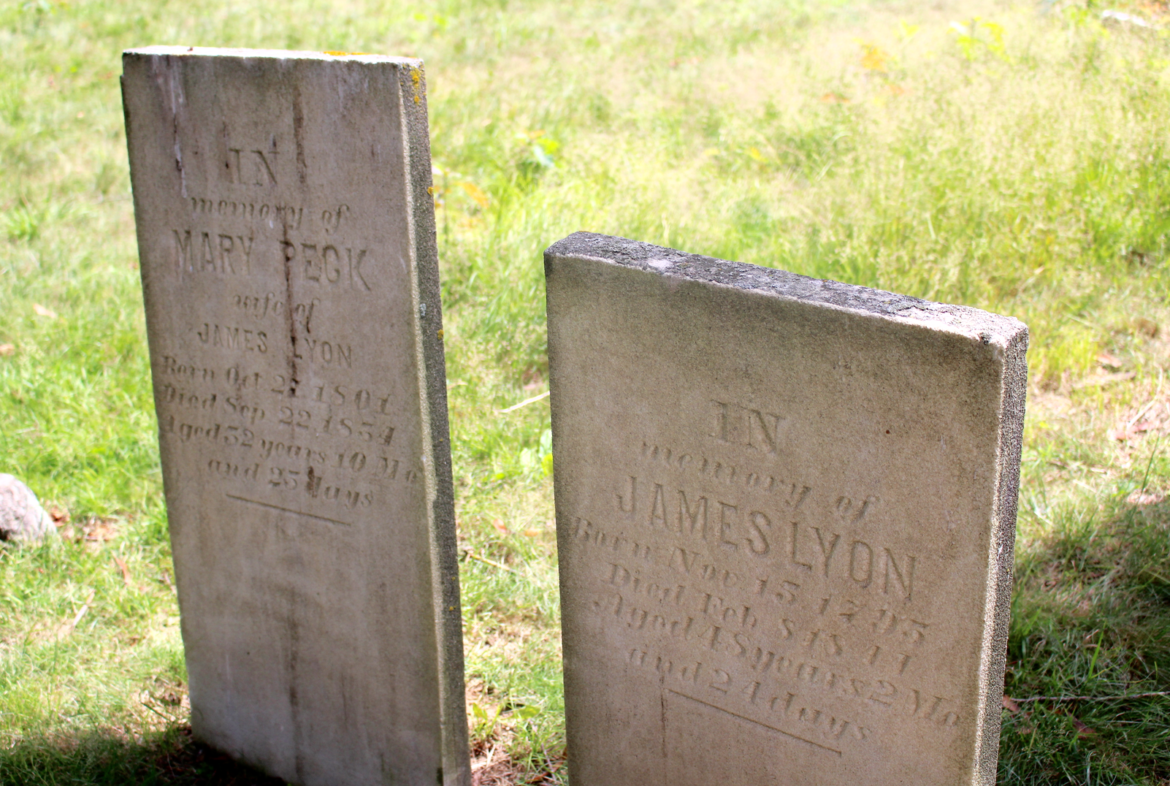 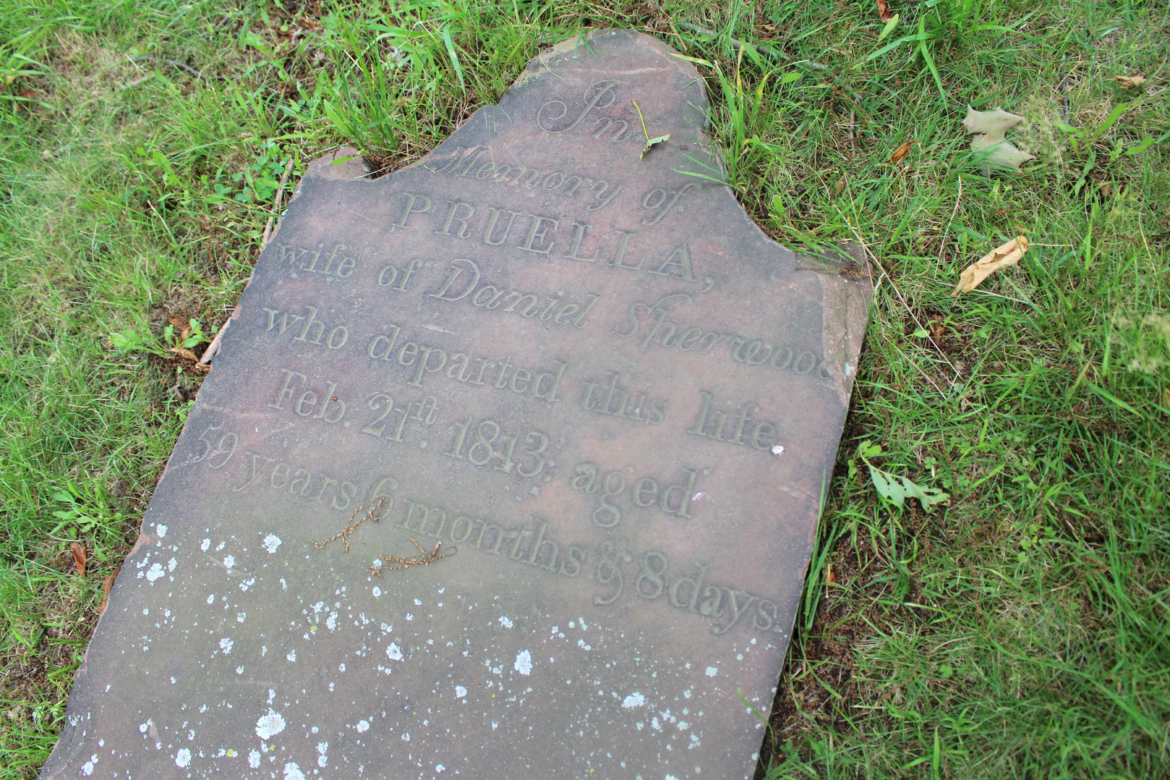 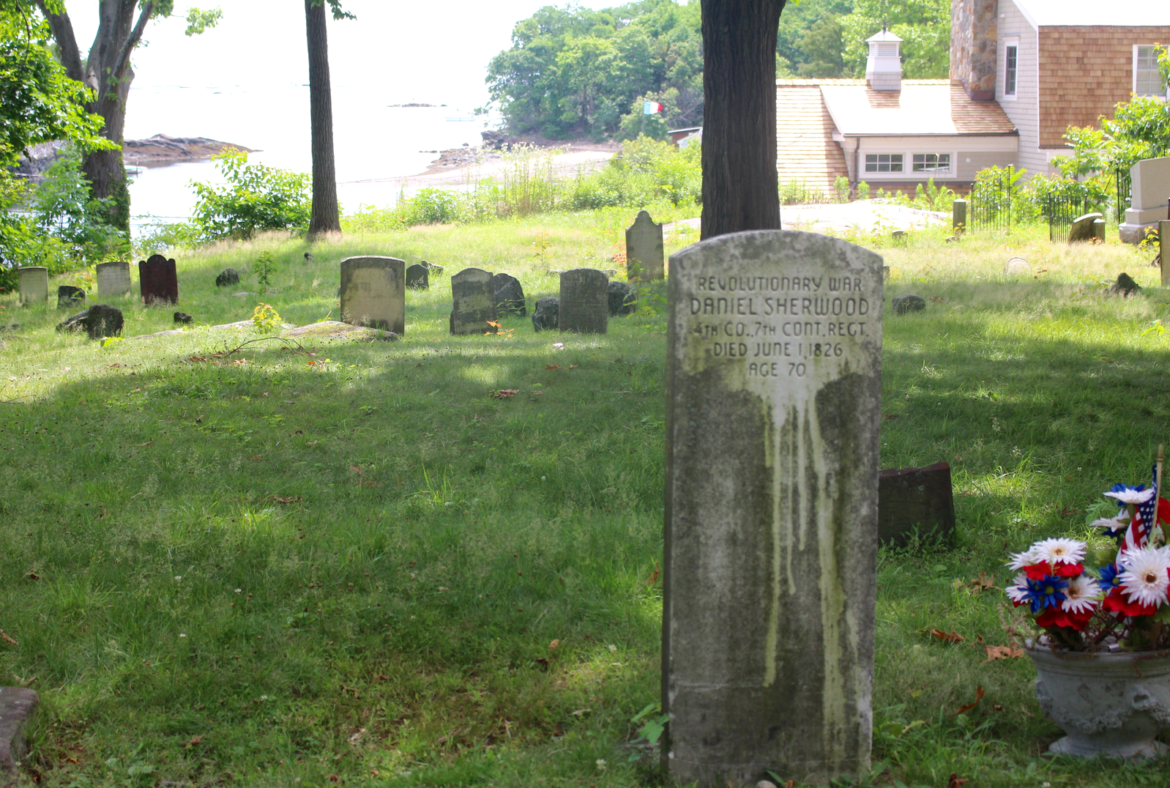 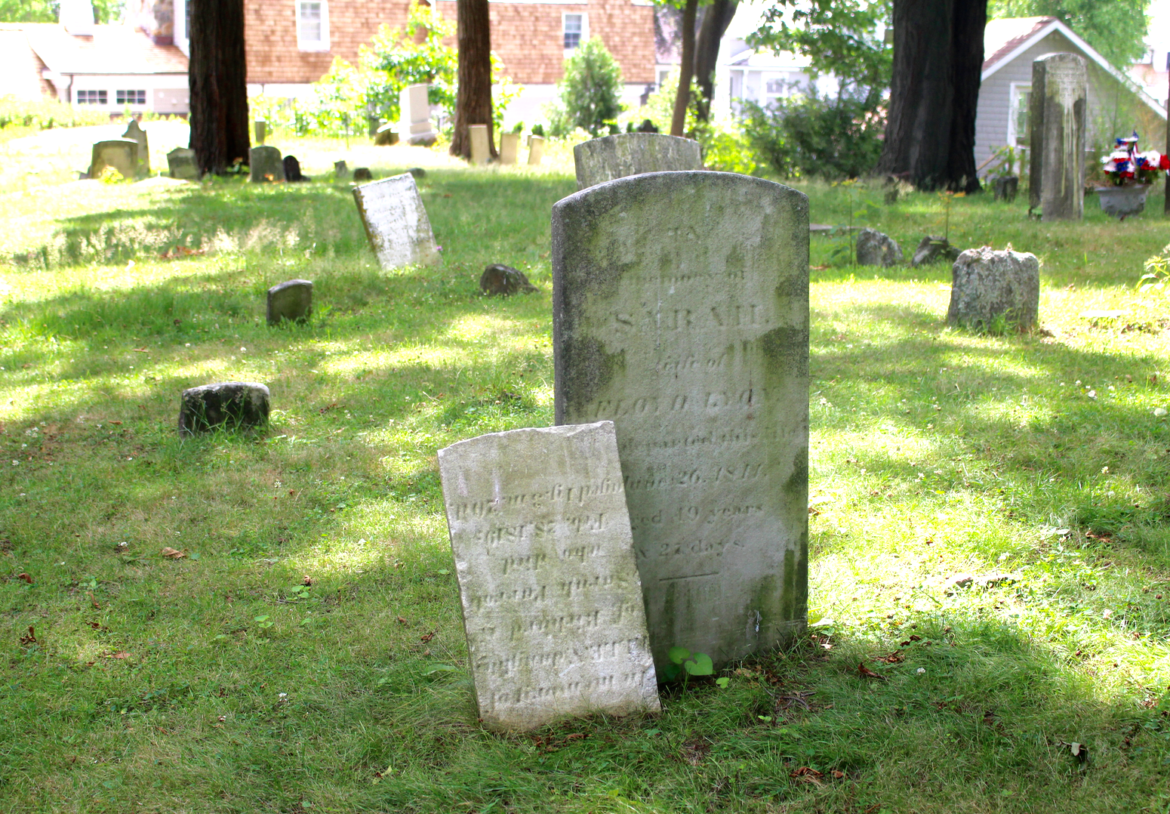 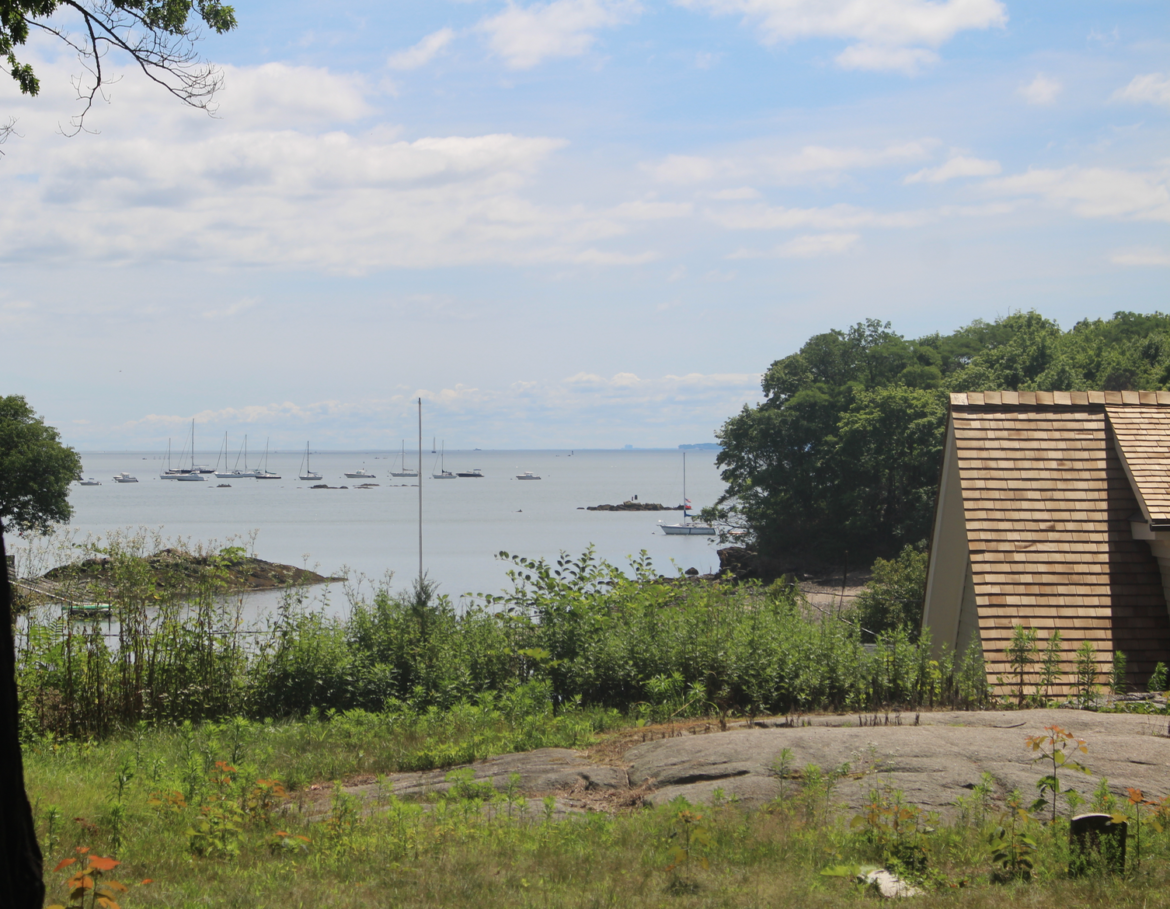 View of the water from the foot of the historic cemetery adjacent to the Antonik house on Byram Shore Rd. July 11, 2016 Credit: Leslie Yager 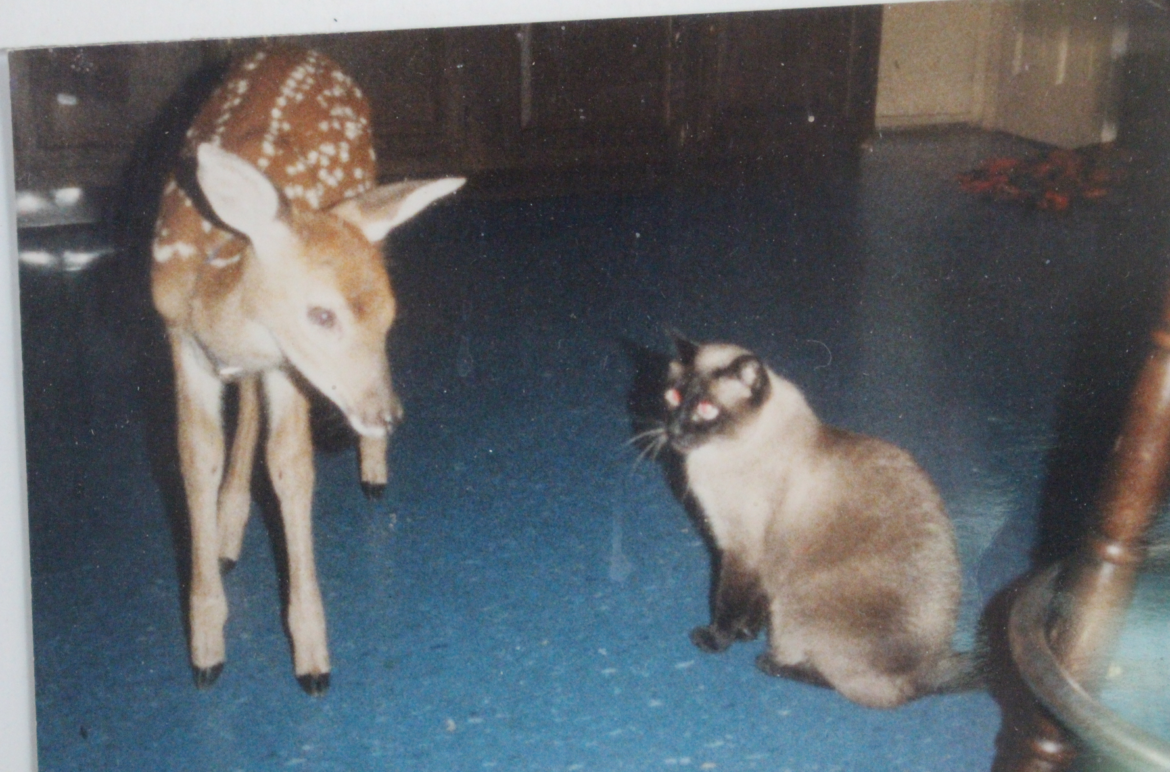 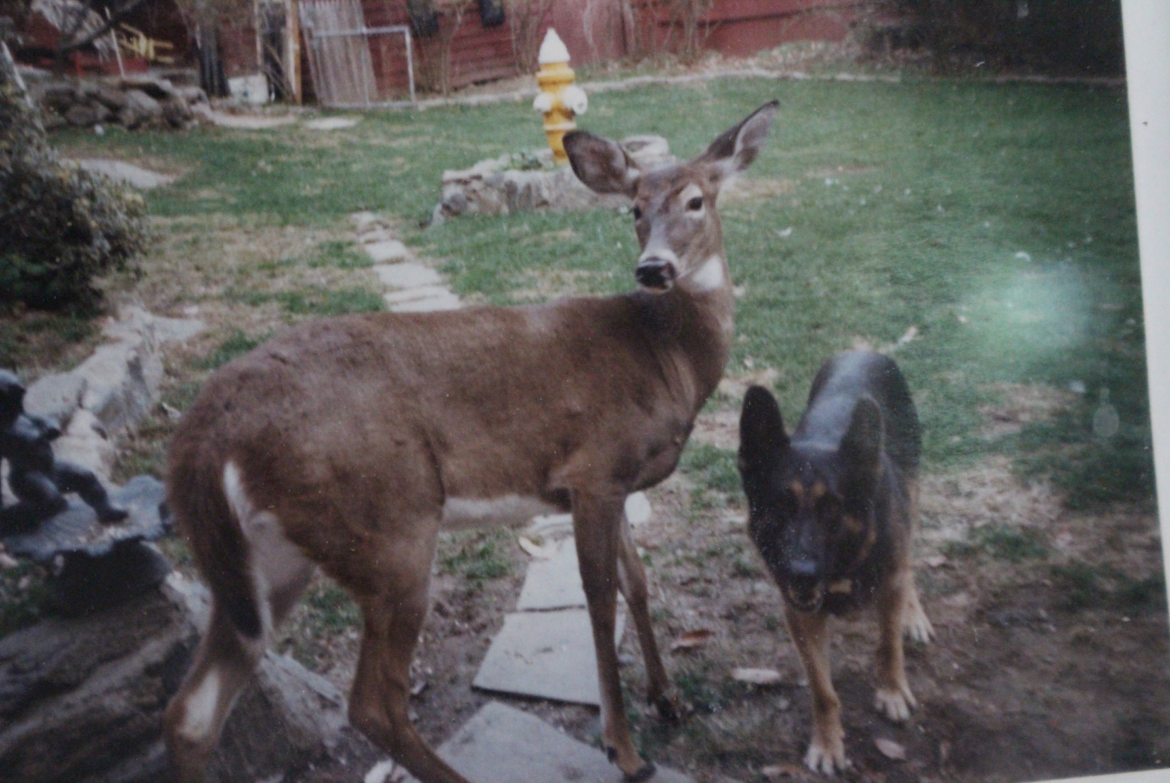 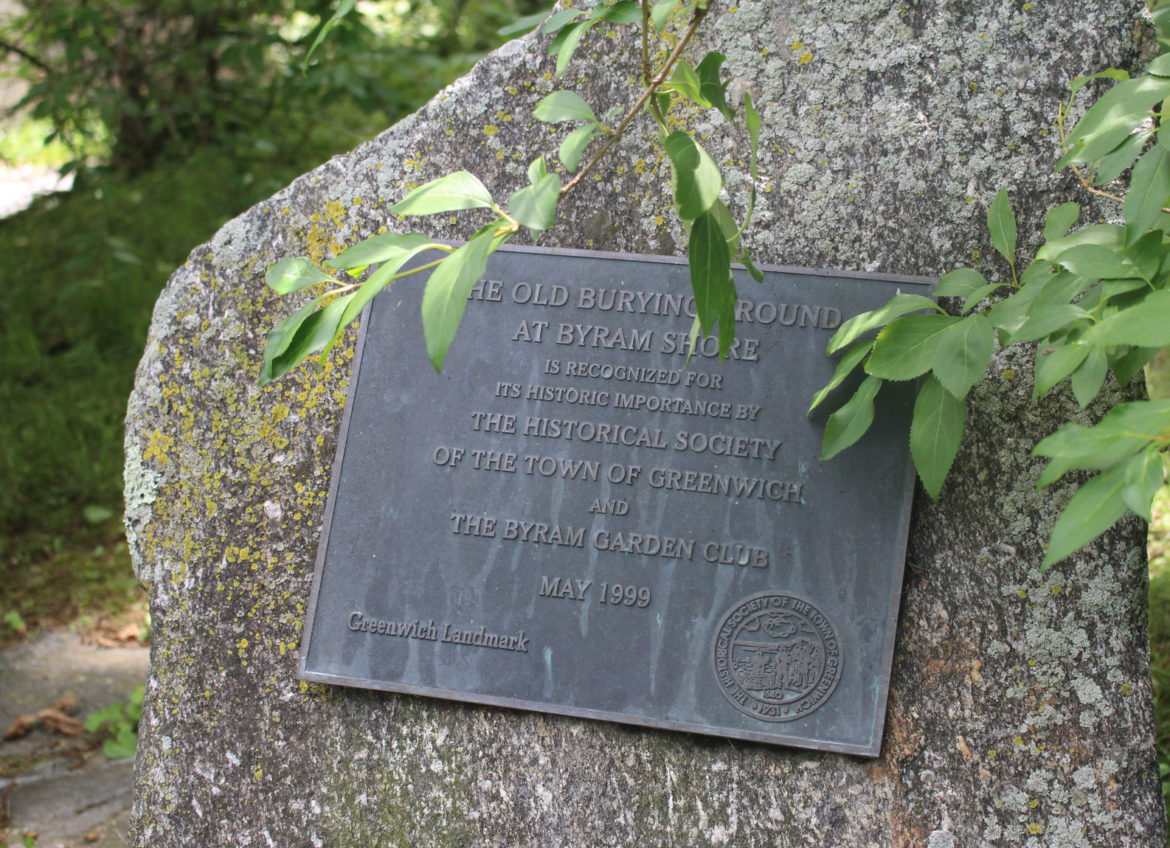