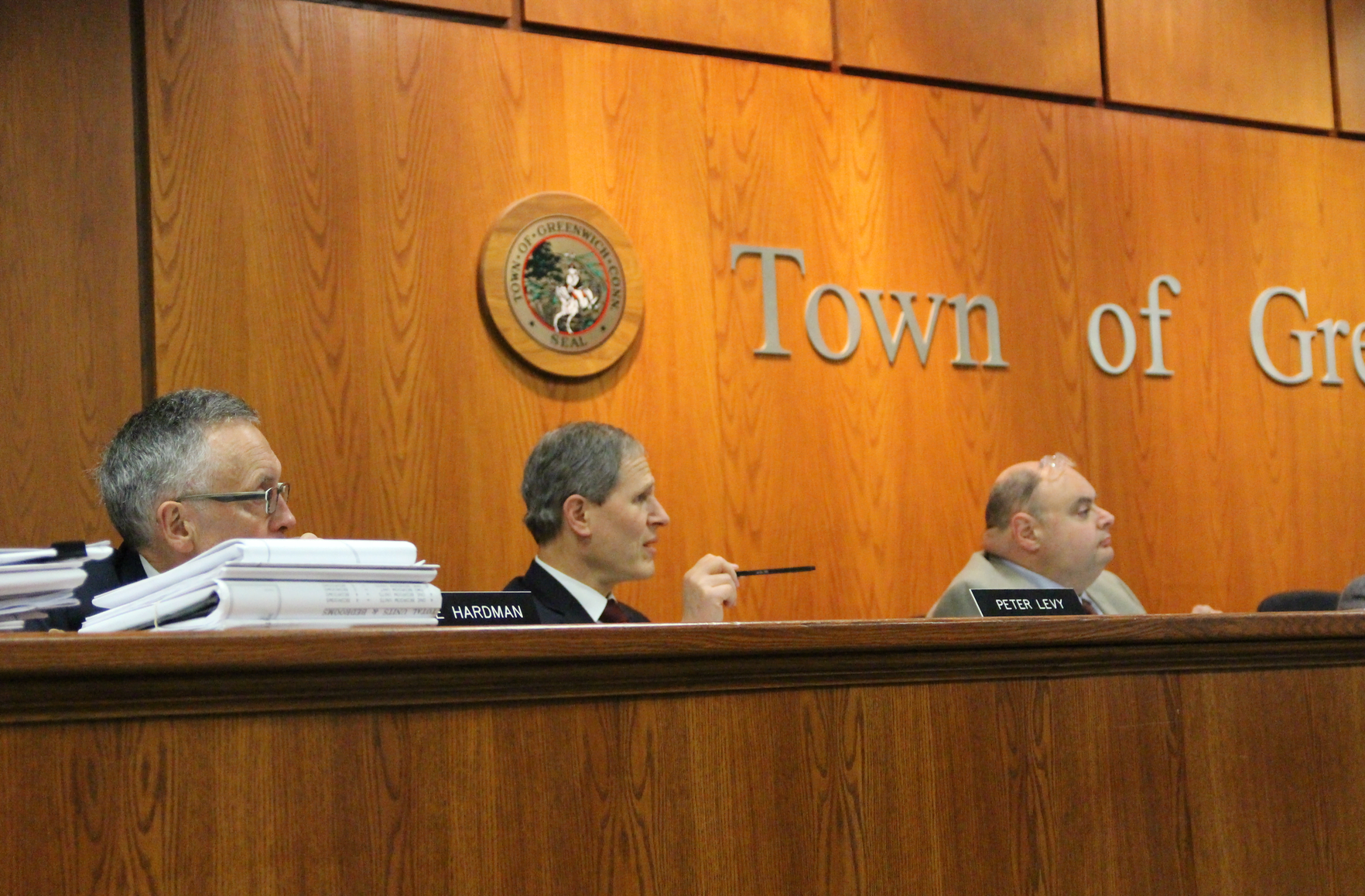 On Nov 20 a proposal to convert office space at The Mill into 69 residential apartments went before the P&Z commission.

The application was before P&Z on Oct 30. Again, on Nov 20, residents voiced concern about increasing traffic congestion in this area of Glenville overall and about the dangerous intersection of Pemberwick Rd and Glenville Rd (by Glenville Pizza.).

The applicant’s proposal is to swap 28,515 sq ft of office space for 33 apartments on the east side of property. This includes 8 apartments in lowest level of the central Mill garage (under Centro).

The East side of the property includes

– The Central Mill building which has a restaurant, yoga, hair salon on one side and 12 rental apartments on the other.

– The “Railroad building” which is home to Bamboo restaurant and a hot yoga studio downstairs, and office space on the second floor.

Since the last meeting the applicant’s traffic engineer Michael Galante, analyzed traffic and parking for the east separately from west.

“Apartments generate less traffic than offices,” Schacter said, adding that the his proposal might even slightly alleviate traffic. “The complaints, however well founded, that Glenville St and Glenville Rd are congested, are worthy of study by the Town, but nothing in our proposal will exacerbate that congestion. Nothing about our proposal will make it more difficult to make a left turn onto Glenville Rd from Pemberwick Rd or from our driveway onto Glenville Street.”

According to the traffic study, in the morning there are 77 cars entering the west side of the site (excluding River Run condos) in the morning. After conversion to apartments, there would be just 3 cars coming in.

In the morning, currently there are 12 vehicles exiting the west side (excluding River Run), whereas there would be 12 cars leaving after the conversion to apartments.

“So that’s a wash. And no change in existing River Run use,” acting P&Z chair Ms. Alban said.

Ms. Alban pointed out that there is currently queuing in the morning to exit the site, even with low occupancy in the offices.

That, she said, is a reflection of existing Glenville traffic which the Dept of Public Works intends to address.

Neighbors have said it takes 5 to 10 minutes queuing to exit.

Attorney John Tesei said, “It probably feels like 5 minutes, but it’s not true.”

Grant to Study Intersection of Pemberwick Rd and Glenville Road

The Dept of Public Works has secured a CMAC grant, which stands for Congestion Mitigation and Air Quality from the Federal Highway Administration to study and execute improvements to the intersection of Pemberwick Rd and Glenville Rd.

Mr. Michel said in a memo that Ms. DeLuca shared the Town is working on the paperwork to start the design process. The paperwork requires RTM approval. There will be a public meeting in spring 2019 that will be noticed a month in advance.

It will take approximately 3-1/2 years to execute improvements to that intersection. Mr. Schacter said his project will be completed in about two years.

During public comment, Karen Matrunich a 14 year resident of Pemberwick Road, said she was sympathetic to the owner of the Mill who has seen office vacancies increase.

“I’m not necessarily opposed to development but I’d like to see successful development for both the developer and residents.”

“The situation for residents of Pemberwick and the Glenville community has changed. We’ve seen in increasing level of traffic and congestion to the point that it’s now a safety situation and we are asking for help,” she said.

Matrunich said the situation has worsened since the revitalized Western Greenwich Civic Center where a preschool operates and ball fields are active. There are new commercial establishments, dry cleaners, deli, liquor store, and more traffic coming from King Street with the expansion of Brunswick School.

“Increased traffic on clogged and congested highways, whether I95 or Merritt, make the Glenville corridor a convenient alternative,” she said.

Matrunich said comparing the residential use to diminished office vacancy is a false choice.

“I think it’s time for the Town to hit the pause button and say do we have the infrastructure in place. Can we find some other solution?” she said.

Katie DeLuca offered to set up a meeting with herself, resident Jean Jacolo, First Selectman Peter Tesei and Jim Michel of Dept of Public Works to discuss issues at the intersection of Glenville Rd and Pemberwick Rd.

Catherine Eskerski said an extension of the application to Feb 7, 2019 would give the community a chance to continue to work with the commission “to make something work well for the community, the Town and the developers.”

Attorney for the applicant John Tesei said the traffic concern was a “community concern that would not be exacerbated, but would be improved by the project,” he said, to laughter from the audience.

Tesei said he was confident the application would receive a FEMA LOMR.

“Would your applicant accept an extension as requested by the public?” Macri asked.

“No,” Mr. Tesei replied. “Giving people false emboldenment with respect to an objection to this project when there should be none as a matter of law, fact and logic. We’ve had empty buildings for a significant amount of time. It has been a hardship,” he said, adding that his client had a good reputation and no complaints for management of The Mill complex.

“This is not just theoretical, it’s intuitive,” he said. “Apartments generate less traffic than offices.”

Mr. Fox shared an idea. “It  appears from Google Earth that you have a lot of space in front to widen Glenville Road,” he said. “Would you be amendable so they don’t have to go through the Condemnation Commission to widen the road if you don’t lose any FAR?”

Attorney Tesei said he’d be happy to explore that with the Town. “That’s a good example of working together,” he said.

“Is your client prepared to direct traffic at peak times?” Mr. Hardman asked.

Mr. Tesei laughed. “I think said putting someone at the intersection of Pemberwick Rd and Glenville Rd is not the greatest thing to do.”

Glenville resident Andrea Blume described having seen raw sewage flowing down the the Byram River during a recent heavy rain and said she was concern that 69 new apartments would further burden the sewer system.

The commissioners said the sewage must have come from upstream, possibly Port Chester. 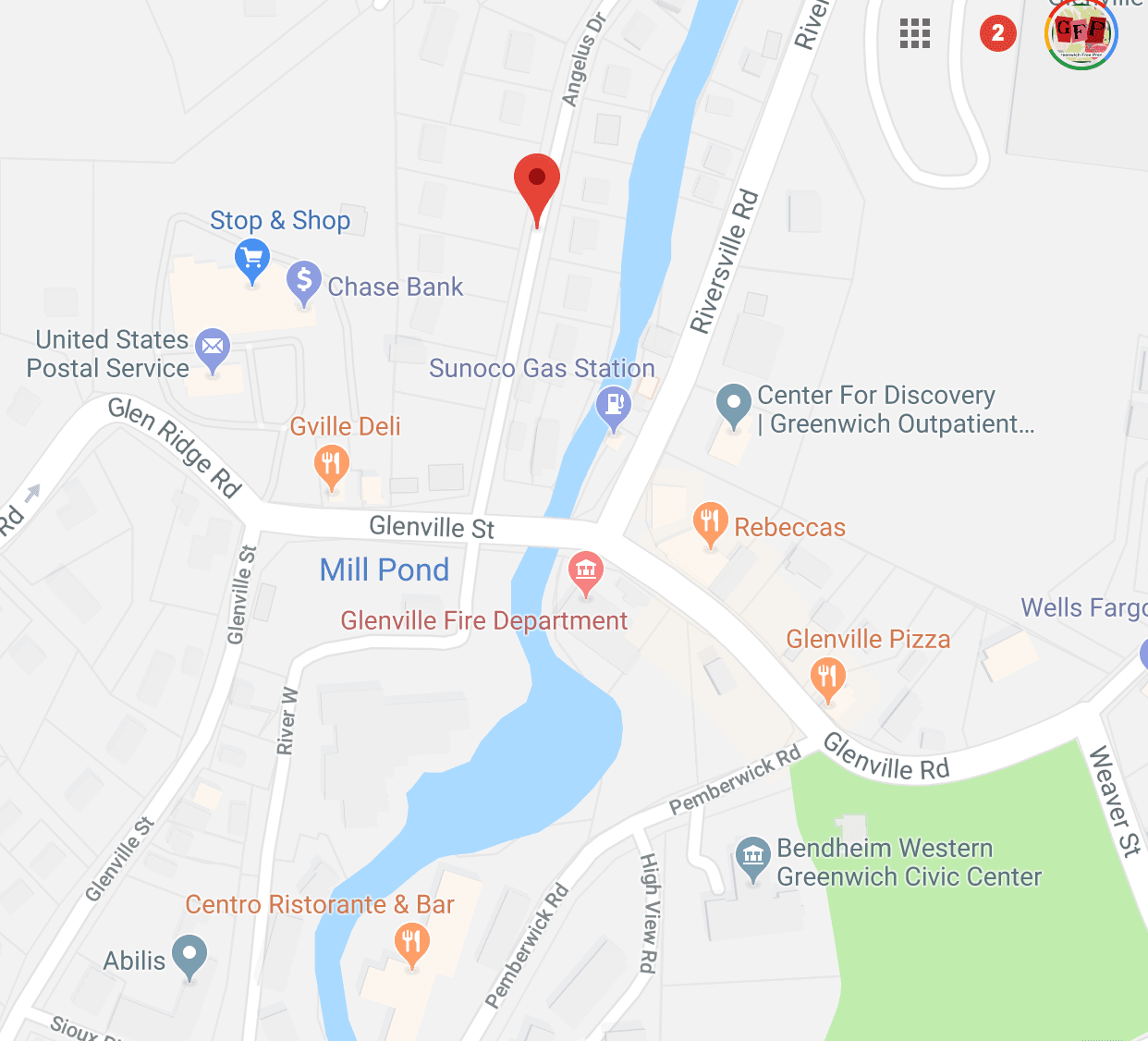 Mr. Yeskey wanted to keep the application open until that was explored.

Mr. Levy asked how long it would take to determine if the block the box X was viable. “Jim Michel is the person to speak with,” Ms. DeLuca said.

At the Oct 30 P&Z meeting residents suggested a bloc the box X at the intersection of Pemberwick and Glenville Rd. They pointed out that the block the box X in front of Whole Foods is effective.

Since Oct 30 GFP spoke to to Greenwich Police who said the X in front of Whole Foods was painted without State permission and is unenforceable from a police standpoint. All markings, signage, lights, etc have to be approved by State.

At the end of the lengthy discussion, the commission declined to vote until the “block the box” was explored further.