The giant purple bows along lower Greenwich Avenue are impossible to miss.

Volunteers for The Alzheimer’s Association, Connecticut Chapter benefited from glorious sunshine on Wednesday morning as they set about festooning trees with purple bows to raise awareness of Alzheimer’s disease and promote the third annual Celebrating Hope event. The event is set for Friday, May 1 at Richard’s on Greenwich Ave. 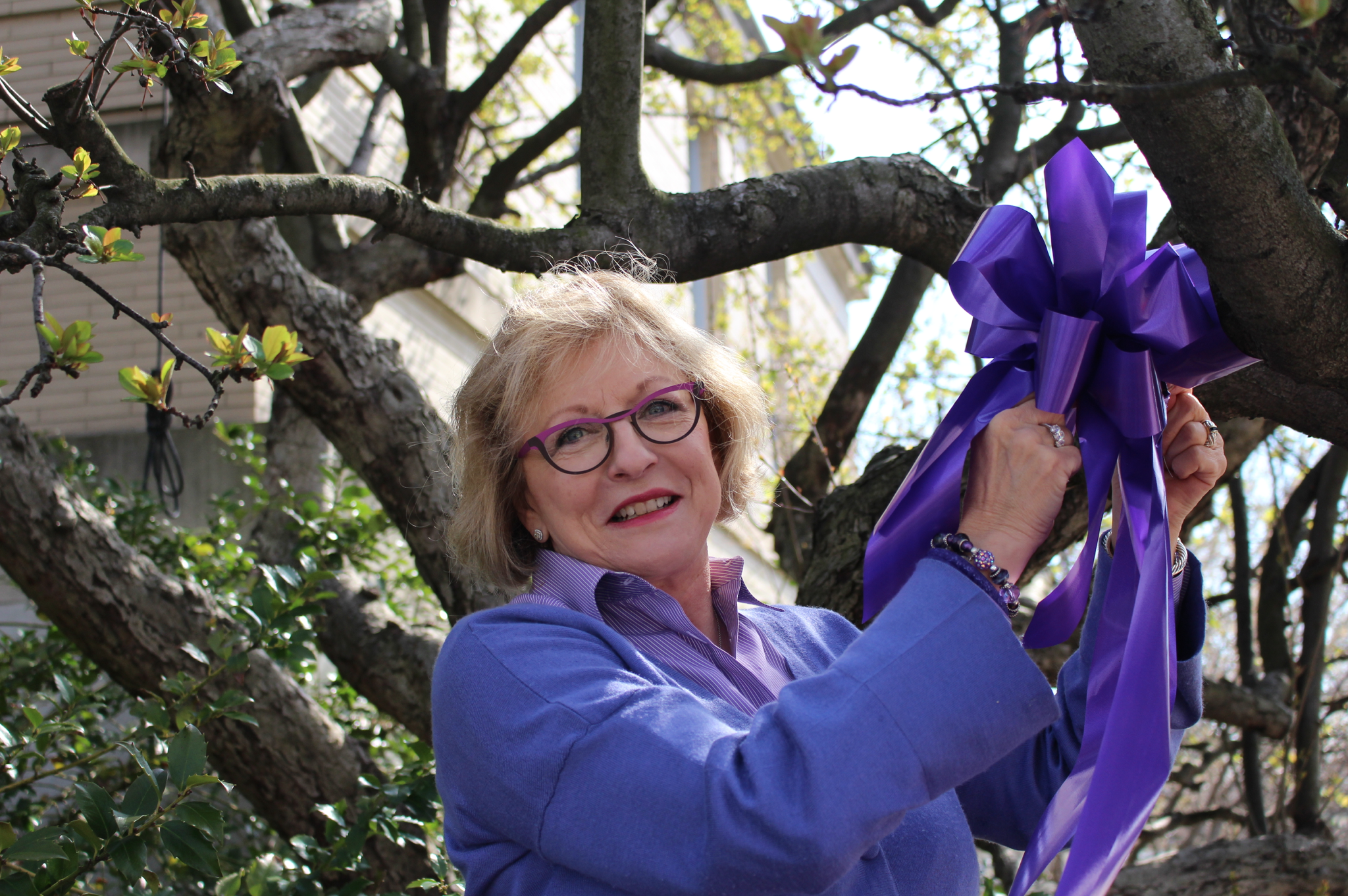 Sharon Parker, marketing chair for the Celebrating Hope event on May 1 attached a purple bow to a tree outside the Greenwich Senior Center. Credit: Leslie Yager

Even better, this year 44 retailers have joined the awareness effort by displaying window clings and decorating display cases and flower planters with purple. At Yogasmoga, a purple window display is on its way, but in the meantime, employees donned purple yoga outfits. At Brooks Brothers Bill Burns, Glenn Lloyd and Shane Hange wore purple ties. At Lux Bond & Green the planters and window displays are all purple-themed.

“It was unbelievable. The number of stores that came out to be community partners this year,” said Sharon Parker, the marketing chair for the Celebrating Hope event, which is set for Friday, May 1 at Richards on Greenwich Ave. 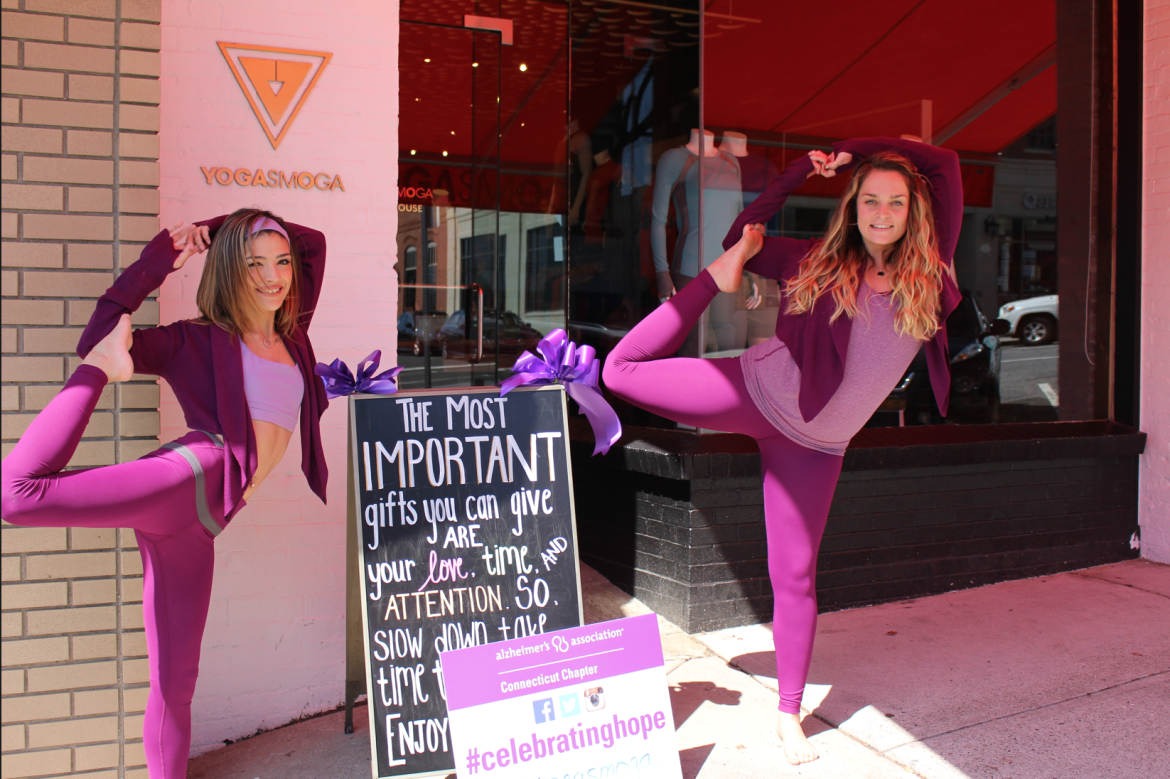 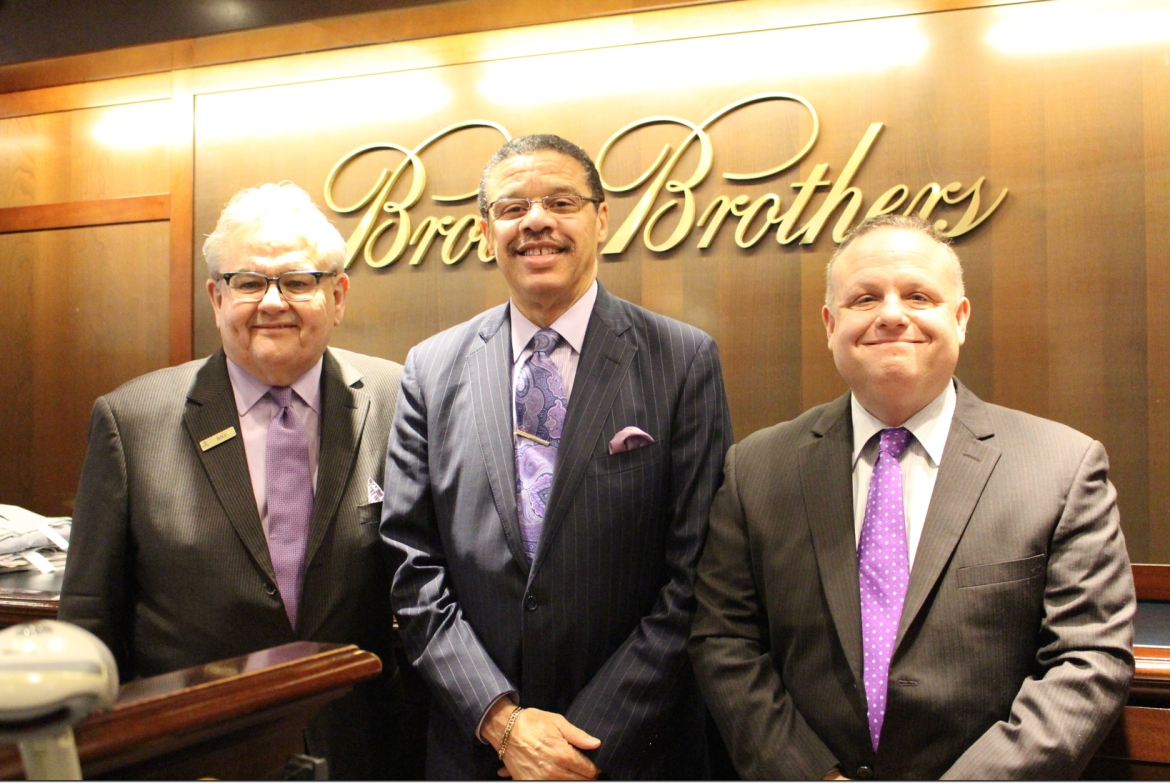 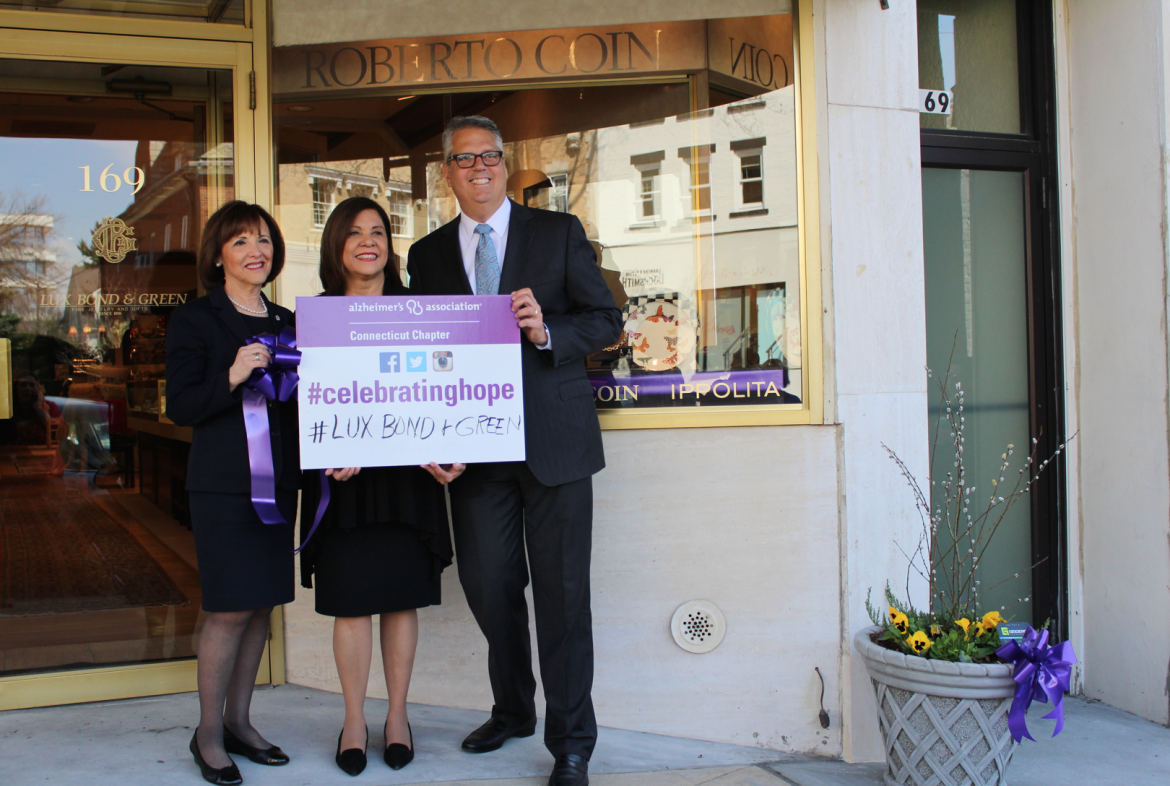 At Lux Bond & Green the window displays are purple-themed to promote Alxheimer’s awareness. The jewelry store is one of 44 retailers displaying their support for the Celebrating Hope event on May 1. Credit: Leslie Yager

Lynn Hagerbrant, one of the co-chairs of the Celebrating Hope event said that since the first fundraiser three years ago, there has been a groundswell of support and awareness of the disease.

“More people are talking about it,” Hagerbrant said. “In the past no one wanted to admit it was part of their family. There is a lot of passion in this group because everyone is effected by Alzheimer’s,” she said of her committee as they walked up and down the sidewalks with their jumbo ribbons.

Hagerbrant, trained as a critical nurse, said she is the primary caregiver for her 81-year-old mother who suffers from Alzheimer’s. “This is the hardest thing I’ve ever done,” she said. “It took me seven years fighting to get the proper diagnosis for my mother. It was a very, very painful time,” she continued, adding that her mother’s doctor initially diagnosed her as having Post-Traumatic Stress Disorder.

“He wasn’t hearing what I was saying because of HIPAA (Health Insurance Portability and Accountability Act),” Hagerbrant said, adding that doctors too often block family input, which complicates diagnosis. “Memory loss can be the result of multiple causes — not necessarily Alzheimer’s. There needs to be a full work-up.”

“I think of all the others out there with the wrong diagnosis,” Hagerbrant said, adding that she also wonders how many homeless people suffer from Alzheimer’s.

This is the third year the Alzheimer’s Association Connecticut Chapter is holding the Celebrate Hope event. Cristin Marandino said the first year the event committee sold 300 tickets for a simple cocktail party that lasted just a couple hours. They raised $100,000.

“They are a small group,” she said of the Alzheimer’s Association Connecticut Chapter. So this is huge for them. What they do with their limited resources is phenomenal,” Marandino said.

The Alzheimer’s Association, Connecticut Chapter is the primary source of information and support to the thousands of Connecticut residents dealing with the effects of Alzheimer’s disease or a related dementia. 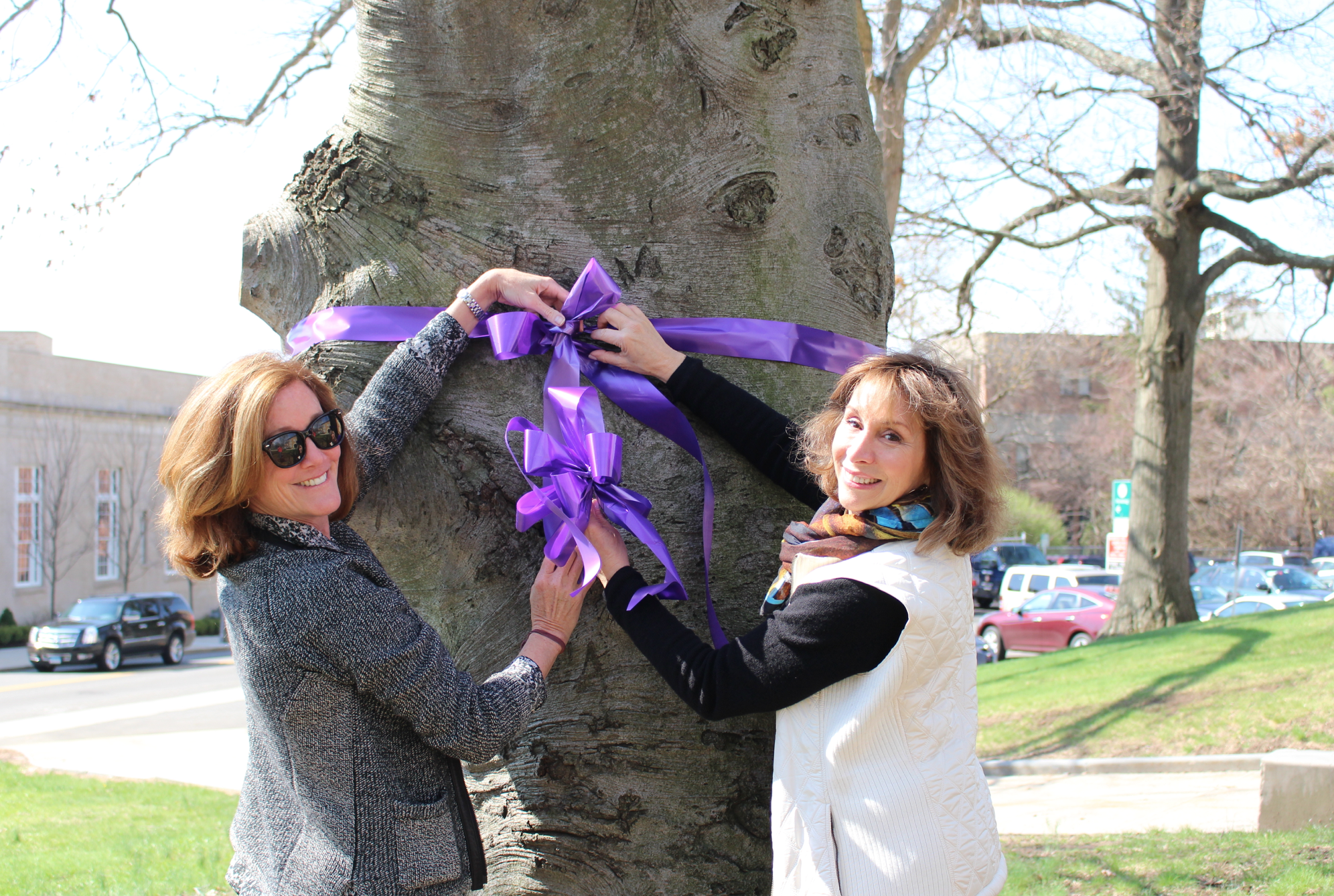 In honor of Alzheimer’s awareness and in advance of the 3rd annual Celebrating Hope event on May 1 at Richards, Allison Constantine and Joy Mindlin tie a purple bow to a tree outside the Havemeyer building on Wednesday. 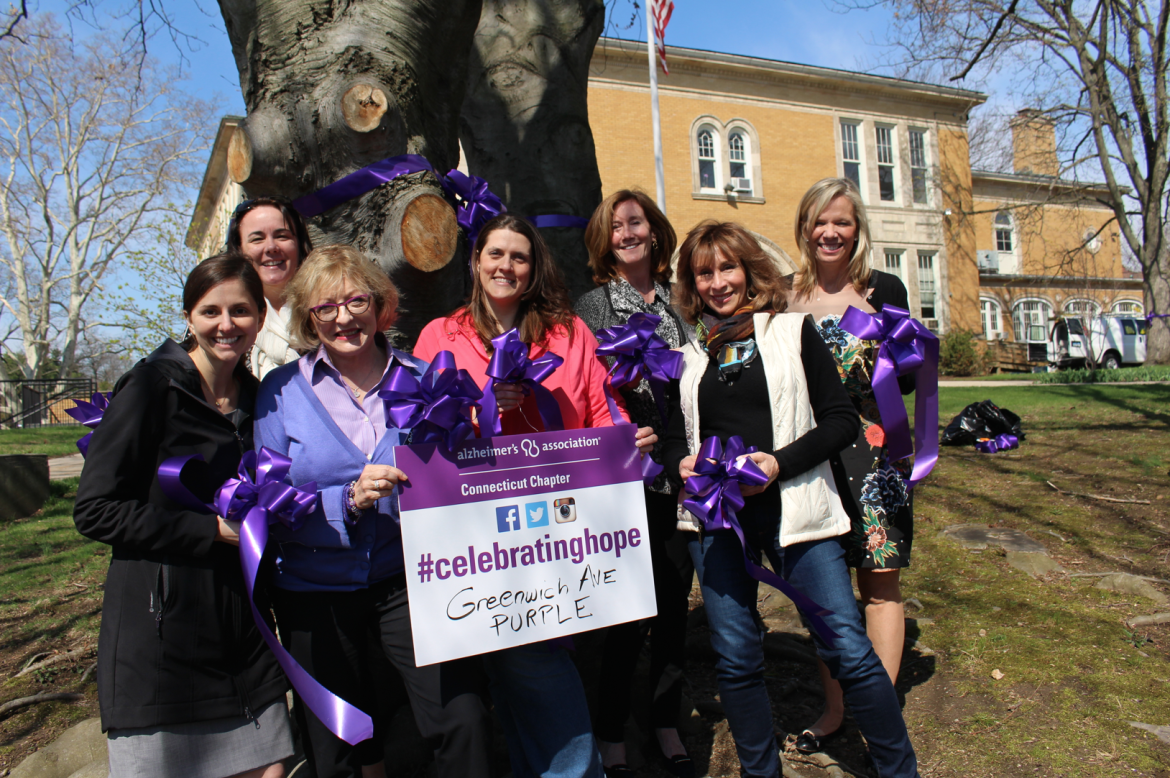