The café at the YWCA Greenwich on East Putnam Avenue is now run by Arcuri’s.

“We took our most popular menu items and added a twist,” said Jamie Arcuri, who got his start in the food business in the 1980s helping his father Vincent at “Old Greenwich Deli” on Sound Beach Ave.

“I started at the age of 12 and worked there all through high school,” Arcuri said this week at the new café inside the YWCA where there is ample parking, abundant seating, and free Wifi. Patrons can also eat outside at picnic tables in nice weather.

Jamie said much of the Cos Cob eatery’s familiar menu has migrated up the hill to 259 East Putnam Avenue where patrons experience “Arcuri’s with a twist.” 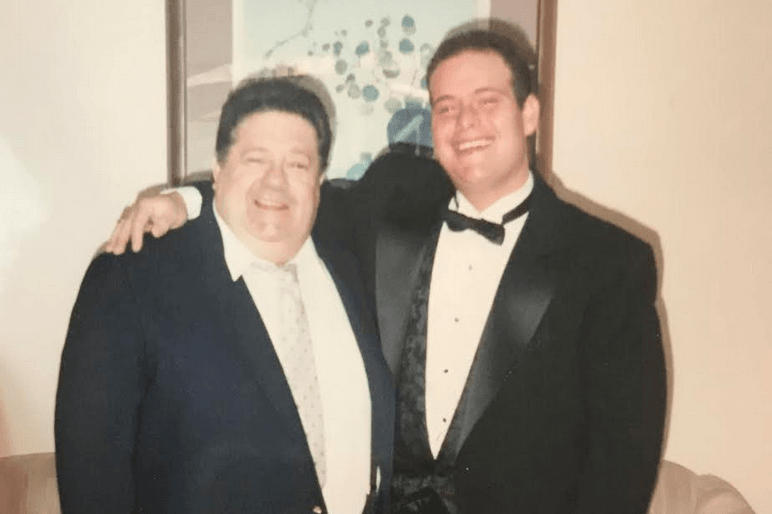 Vincent Arcuri opened Old Greenwich Deli in 1971. Jamie Arcuri started working there in the 1980s when pizza was added to the menu and the name changed to Arcuri’s Deli & Pizza.

In the early 1980’s Vincent introduced pizza to the business and changed the name to “Arcuri’s Deli & Pizza.”

In 1992 the Arcuris expanded to the familiar Cos Cob location, known today as Arcuri’s Pizza & Salad.

Jamie took over the operation in 1995 and said today there are 11 delivery cars driving around Greenwich on any given day.

It was in Cos Cob where the Arcuris perfected their ever-popular salad dressing and home made bread.

“I would later introduce a full line of wraps, burgers and entrees,” Jamie said.

All told, Arcuri’s has been serving the Greenwich community for over 48 years.

“We are honored to expand as part of the YWCA Family,” Jamie said noting that his Cos Cob location does not have the ample seating the YWCA affords.

Unique to Arcuri’s Café – Breakfast!
And Arcuri’s Café at the YWCA offers breakfast, which is served from 8:00am to 11:30am. (The Cos Cob location does not offer breakfast.)

“We use cage-free eggs for omelettes and egg platters. We offer whole grain pancakes, and our very own ‘Bri’s Breakfast Burrito,'” Jamie said nodding to his fiancé Brianna. “It has scrambled eggs, bacon and a cheddar and jack cheese blend, avocado home fries, and chipotle aioli,” he said. “It’s to die for!”

Also, the café bakes their own muffins every morning. Varieties include blueberry, orange cranberry, and corn. They source their bagels from Upper Crust Bagel Company.

There are also super healthy breakfast wraps including The Chipper with egg whites, turkey bacon, swiss cheese, spinach and roasted peppers, and served on a whole wheat wrap.

All breakfast wraps have a gluten free version for $1.00 extra.

As Jamie talked about his venture at the YWCA, an assortment of customers arrived.

“We’re seeing employees, parents who bring kids for swim practice, kids with pocket change and lots of moms, nannies, dads and babysitters,” Jamie said. “Everyone has been warm and welcoming at the YWCA.” 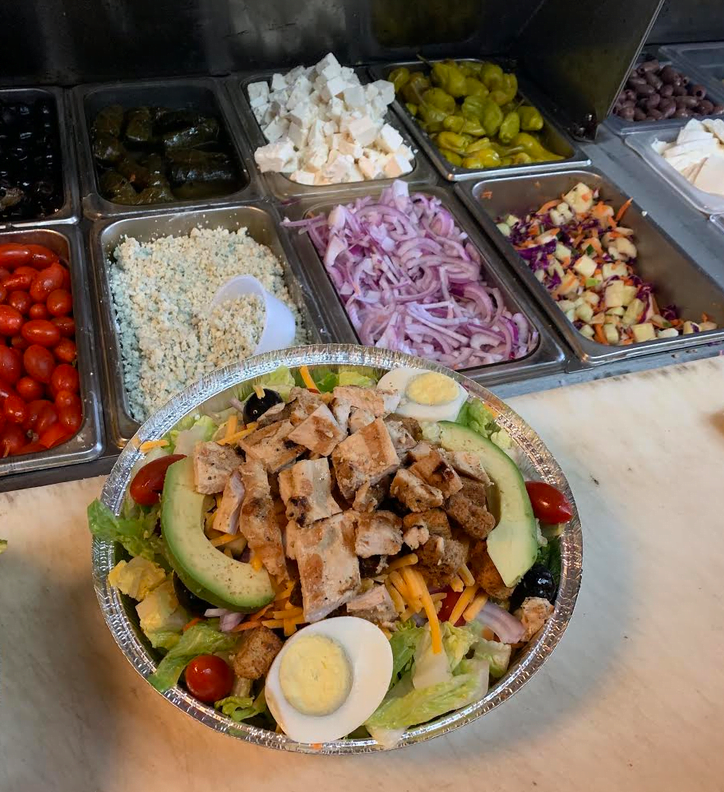 The Cos Cobb salad available at the Arcuri’s Café at the YWCA Greenwich. 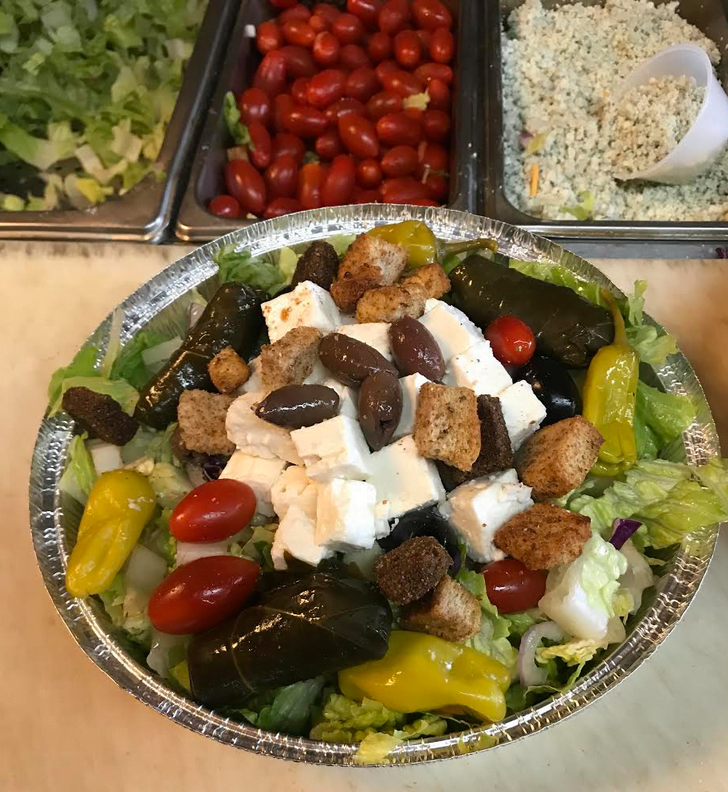 Greek Salad available at Arcuri’s Café inside the YWCA Greenwich.

Best Salads in Town
There are also abundant salads, which Arcuri’s is well known for. A large version of each salad is available.

There is The California with spinach, Gorgonzola, avocado, pine nuts, golden raisins, grape tomato and croutons. 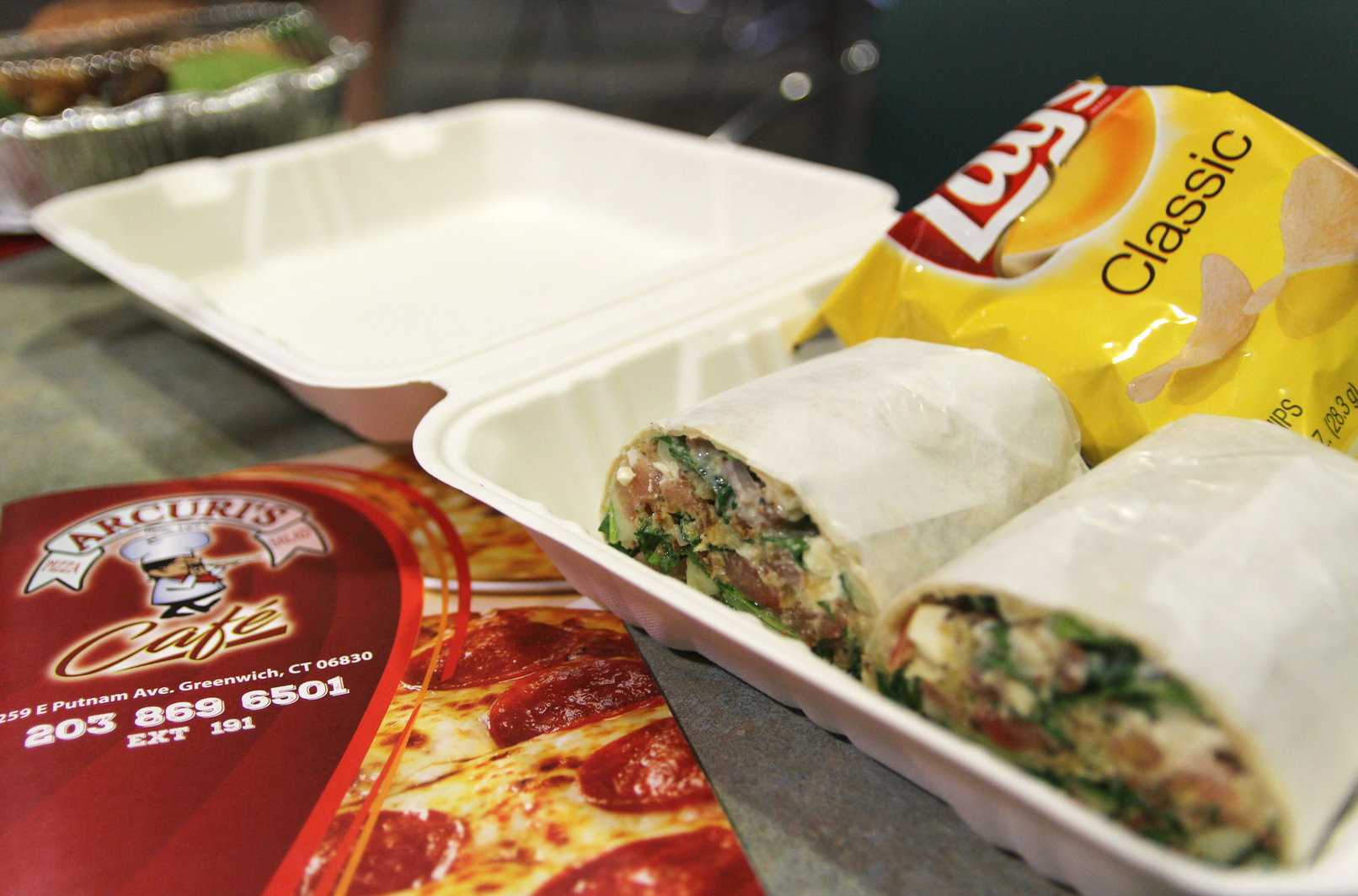 New items exclusive to the café  that Jamie hopes people will try include the Falafel Wrap (we loved it!) with feta, spinach, cucumber, tomato, onion, house dressing and tzatsiki.

The Falafel is also offered as an appetizer with five Falafel balls and tzatsiki dipping sauce.

“You can get a chicken parm here too,” Jamie said, adding, “We offer Greek truffle fries, which are to die for.” 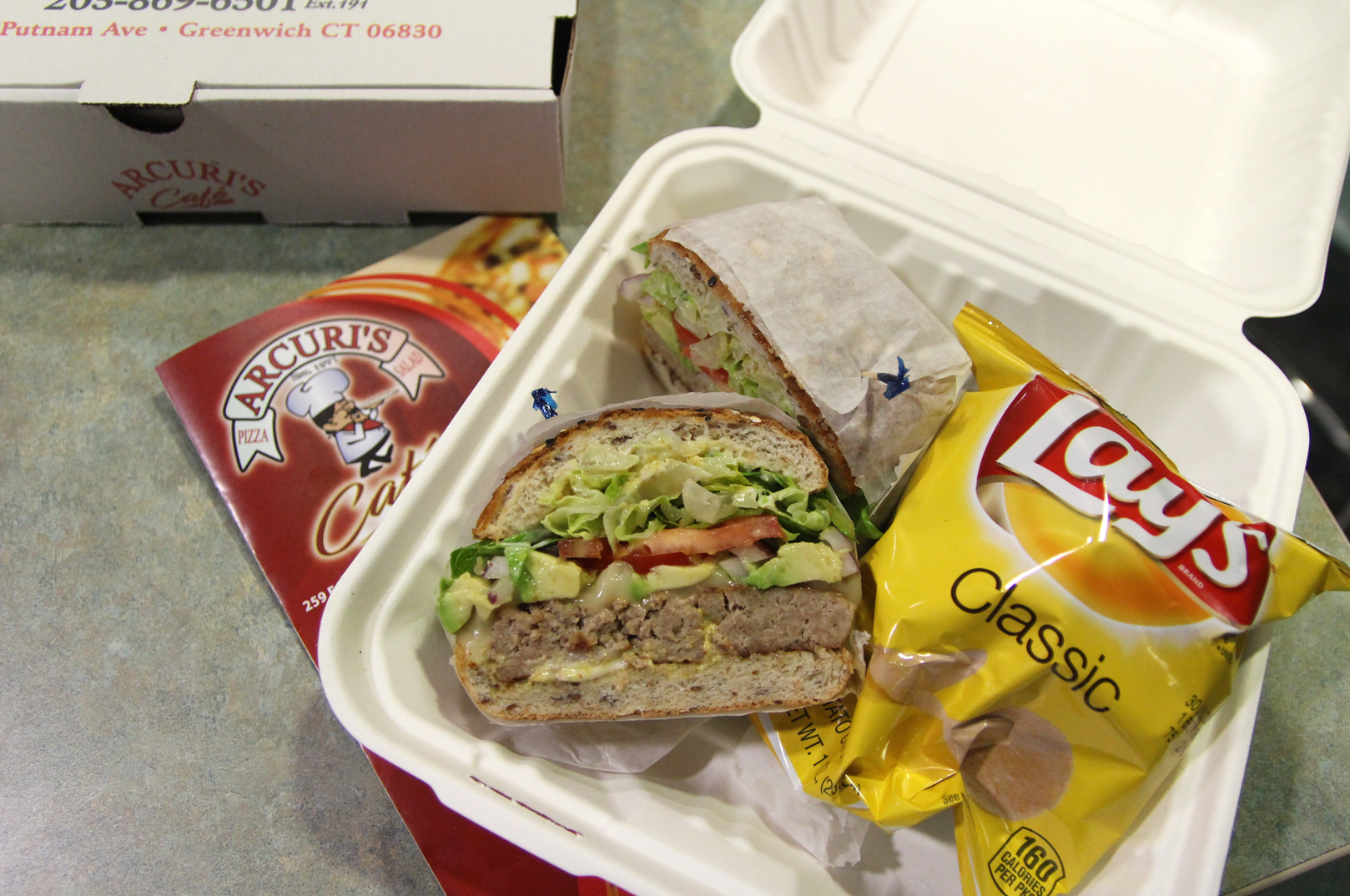 A delicious turkey burger is a unique feature of the Arcuri’s Café inside the YWCA Greenwich. Photo: Leslie Yage

Another item exclusive to the café menu is the Turkey Burger made with jack cheese, lettuce, tomato, red onion, avocado, mayo, spicy brown mustard on an ancient grain bun.

Jamie said Arcuri’s had their soft opening at the YWCA on June 3.

Personal Pizza – The Bambino
“That was the day people asked if I could make a personal pizza?'” Jamie recalled. “‘Yes we can. It’s called the Bambino.”

“The Bambino is a perfect 10″ pizza with six small slices. It’s not small,” Jamie said. “It’s perfect for one person. The YWCA wanted pizza and brought in the pizza ovens for us.”

Pizza favorites include the Buffalo Chicken pizza, Bacon Chicken Ranch pizza, and the Margarita. There is also also a gluten free pizza option. 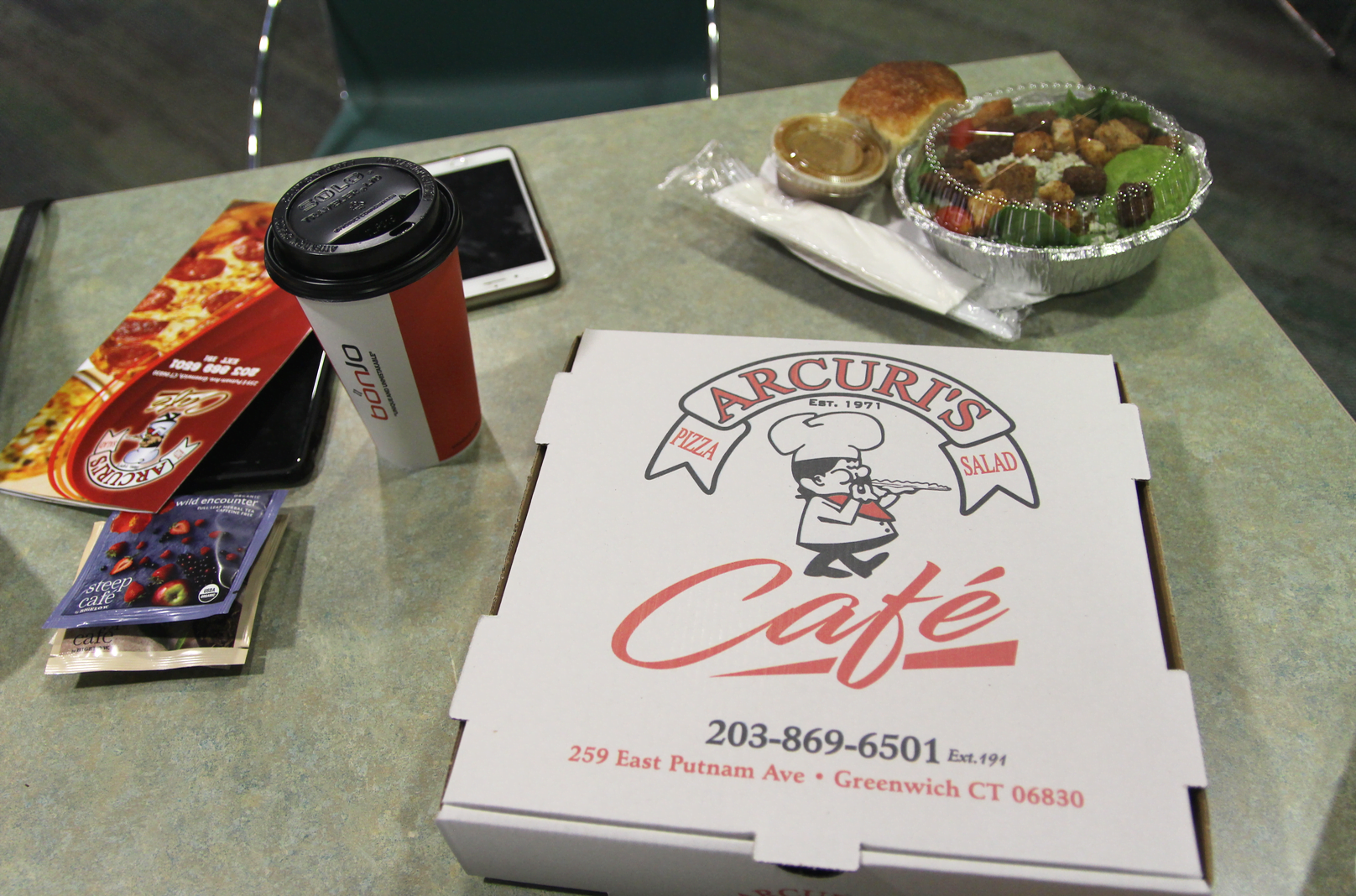 Arcuri said for beverages, patrons can order anything from a Coke to a Kombucha from Kevita, which is an organic, fermented drink with live probiotics typically sold at health food stores.

Also the menu includes organic juices and organic milks for the kids.

Jamie said they are proud to offer coffee from Bonjo Gourmet Coffee, a coffee roaster in Stamford. The coffee is designed to taste great either hot or iced.

They also offer Organic Steep Tea which is delicious both hot or iced.

They are in the process of adding smoothies, including strawberry and banana which they will call “The Classic,” and a green smoothie called “The Staycation,” that features spinach.

Jamie said his manager Rafael who has worked in Cos Cob for 20 years has been busy at the YWCA running the crews and dialing in all the food and making sure it is consistent.

“He is the backbone,” Jamie said. “He has made it seamless so the pizza tastes the same here as from Cos Cob.”

Also, Nick Glekas, will be a steady presence at the Arcuri’s Café at the YWCA.

For now the hours are 8:00am to 3:00pm Monday through Friday. (Down the road Arcuri said they might expand through the dinner hour and hopefully open on Saturdays.)

It is not necessary to be a member of the YWCA Greenwich to come to Arcuri’s café.