Letter to the editor from Janet Stone McGuigan, Old Greenwich

It is a challenging time to be the parent of a high school junior and college freshman.  As concerns about COVID-19 prompt school and campus closures, including my children’s, I stress about the impact this disruption will have on their academic experiences.  Will my junior be able to learn the material he needs in order to do well on his AP and SAT subject tests?  Will those tests even go forward as planned?  What about the Promposal he was planning, with the mix of nerves and excitement that are so typical of the teen social scene?  Will there even be a Junior Prom?  And what about the college visits we were planning for the April break?  Campus visits have been suspended until the fall, so we will take virtual tours, but will that give my child the feel of the place we were hoping these visits would provide?  Will my college freshman be able to complete his classes remotely?  How does one even take a lab course remotely?  A pre-med student, will he be able to volunteer at a city hospital this summer as he thought he might?  I realize these disruptions could be worse.  My elder son has asthma and my spouse and I are admittedly middle-aged, but otherwise my family is not especially at risk.  My college student’s campus is a several hour drive from our home, but at least it is a car ride away and not a plane trip away.

Still, I find myself exhausted from these worries.  So I have thrown myself at a project that the forced quarantine has created time for – sorting through the personal papers, letters and photos belonging to my parents that I moved to my house after the recent sale of my childhood home.  My mother passed away in 2013, after declining for several years with dementia.  My father passed away last year at the age of 92, after a very brief illness.  It feels strange to be grateful that he died when he did, but I AM grateful that COVID-19 did not make its appearance last year.  The flu is a horrible end, and the thought that he could have been isolated and alone makes me so sad.  My thoughts are with our elderly and their families.

My parents were born in 1926, and lived long, healthy and productive lives.  By the time I was born in 1968 (also a year of disruption!), World War II was something of a distant memory, a generation removed.  But as I sift through the mementos my parents held on to, in photo albums, cigar boxes, even old Army ammunition boxes, it is clear that the war years were not a footnote in their lives.

My mother graduated high school in 1943.  Even as she recorded in her journals the fun and gay memories that populate early adulthood, she, her siblings and my grandparents had to be strong not knowing the fate of my mother’s older brother, an Army Air Force tail gunner based in England. 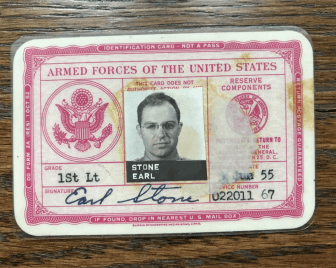 My father graduated high school in 1944, and was told not to make plans, that he would certainly be drafted.  He dutifully sat for entrance tests, and ended up training to be a radio operator with the Great Lakes Naval Station.  His college entrance was delayed until 1946, but at least he was able to enter college with an ROTC scholarship, though it did not pay for much beyond basic boarding costs.  He transferred from a junior college to Clarkson Memorial Institute of Technology (today’s Clarkson University) and took on a demanding course load so that he could graduate in 1950 with a civil engineering degree.  Then again, as he was starting to put together his professional career, first with the US Geological Survey and then with Hughes Aircraft, his plans were disrupted and he was sent to Korea for two years as a lieutenant in the US Army Corps of Engineers.

As I look back at my childhood through the lens of an adult, it is notable that none of the adults in that childhood complained about the disruption that the war years imposed on them.  I know they were stressful years, no one called them happy years, but when they were referenced they were called “formative” years.  I never heard a first-hand account of my uncle’s war time experience until my wedding.  My husband and I were living in Brussels at the time, and my uncle remarked that he had been to Brussels and remembered seeing the Mannekin Pis.  To my stunned ears, he shared that he was in Brussels because he and his bomber crew had been shot down over Belgium and had managed to connect with a local cell of the Resistance, which heroically found them a plane – that did not have a functioning radio.  So they flew back to England not knowing if they would be shot down again – possibly by friendly fire – and upon landing were committed to two weeks of isolation to treat their PTSD.  In comparison my household’s quarantine seems like a vacation.

It is a testament to my parents’ generation that they graduated from the war years stronger for the experience, the way metal is made stronger by fire.  Veterans entered college in unprecedented numbers.  When my uncle started at Cornell University in the fall of 1946, there were so many GI’s entering college there were not enough dorm rooms to house them and they started the year in tents on the Arts Quad.  The nation, concerned about war readiness, created the Interstate Highway System, which bolstered the American economy, even if that was an unintended consequence.

The current State of Emergency prompted by COVID-19 may not compare with the disruption and trauma of World War II.  That is for individuals and history to decide.  But we are certainly capable of using this disruption to make our world a better place.  That is not unprecedented.