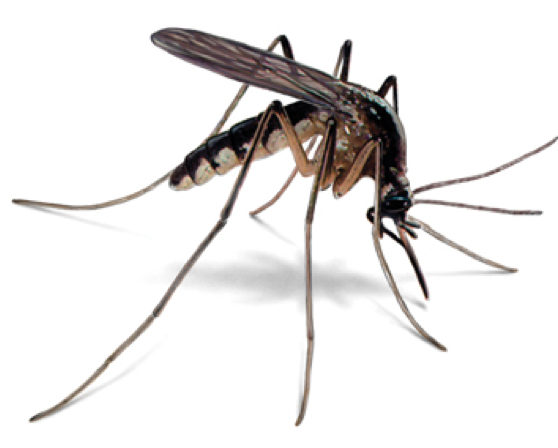 With the warm weather comes the mosquitoes and with the mosquitoes the threat of West Nile Virus. As of June 5, 2017 the State of Connecticut began their mosquito trapping and testing for the virus.

In conjunction with the State and other Towns across Connecticut, the Town of Greenwich has begun the fight against West Nile Virus this month and will continue through October, 2017. The program involves conducting a preemptive larviciding program that will include the treatment of public and private roadway catch basins, public school ground catch basins and other property owned and operated by the Town if necessary.

Director of Health, Caroline Calderone Baisley stated, “Controlling the mosquito population in the larval stage through the application of larvicide has been found to be very effective over the years, so it is prudent to continue this action.”

The Town, along with several State agencies will implement an integrated mosquito management program that includes monitoring and surveillance, education and prevention. Adult mosquito control will only be considered if necessary. In Connecticut, in 2016, mosquitoes, domestic animals and humans were included in surveillance systems. The following is a list of those results:

• Mosquitoes were collected at 91 permanent mosquito-trapping stations in 72 municipalities throughout the state. A total of 173,988 mosquitoes were trapped and tested for WNV, Eastern Equine Encephalitis (EEE) and Zika virus. WNV positive mosquitoes were found in twenty (20) Connecticut towns. The Zika virus was not isolated from mosquito pools in Connecticut in 2016.

“Although the town’s larvicide program will treat catch basins, the general public must be vigilant in eliminating standing water on their own properties and protecting themselves from biting mosquitoes at all times,” said Director of Environmental Services, Michael Long. “It is important to recognize that the highest risk of exposure to West Nile Virus infected mosquitoes is during the months of August and September.”

When bitten by an infected mosquito, most people are able to fight off the infection and experience either mild symptoms, such as headache and fever, or no symptoms at all. It is believed that approximately one in 100 persons bitten by an infected mosquito become ill. In a minority of infected persons, especially those over 50 years old, West Nile Virus can cause serious illness, including encephalitis and meningitis. Infection leads to death in 3 to 15 percent of persons with severe forms of the illness. The virus is spread to humans by the bite of an infected mosquito, which becomes infected when it bites a bird carrying the virus. West Nile virus is not spread by person-to-person contact or directly from birds to people. Although there is no specific treatment or cure, the symptoms and complications of the disease can often be treated. Most people who become ill recover.

In some individuals, including the elderly and persons with compromised immune systems, WNV can cause serious illness that affects the central nervous system. At its most serious, it can cause permanent neurological damage and can be fatal. General symptoms occur suddenly between 5 – 15 days following the bite of an infected mosquito and range from a slight fever, headache, rash, swollen lymph nodes, nausea, malaise and eye pain, to the rapid onset of severe headache, high fever, stiff neck, disorientation, severe muscle weakness, gastrointestinal symptoms, coma or death. Residents are encouraged to see a physician immediately if they develop any of these sudden symptoms.

“Personal measures are extremely important to protect ourselves against biting mosquitoes during the day and at night,” says Michael S. Long. The following precautions should be taken:

• Avoid outdoor activities at dawn and dusk when mosquitoes are most active.

• If you plan to be outdoors for a long period of time, wear long sleeved shirts, long pants and use mosquito repellent according to the manufacturer’s directions on the label (10% or less DEET for children and no more than 30% DEET for adults). Avoid application of repellents with DEET on infants and small children.

• Don’t camp overnight near stagnant or standing water where mosquitoes are most active.

• If you dispose of a dead animal – handle with gloves or bag the animal without touching it.

In addition, Greenwich residents are urged to continue to participate in the Town’s mosquito control effort by eliminating areas of standing water around their homes which includes:

• Fill in or drain any low places (puddles, ruts) in yard.

• Repair leaky pipes and outside faucets.

• Empty plastic wading pools at least once a week and store indoors when not in use.

• Make sure your backyard pool is properly chlorinated every day.

• Fill in tree rot holes and hollow stumps that hold water with sand or concrete.

• Change the water in birdbaths and plant pots or drip trays at least once each week.

• Ponds and stagnant water bodies that do not support fish, frogs or other amphibians that eat mosquito larvae may be treated with a biological control agent such as Bacillus thuringiensis israelensis (BTI) and Bacillus sphaericus (BS).

It is suggested that the Department of Health or Greenwich Conservation Commission be contacted when treatment is considered. 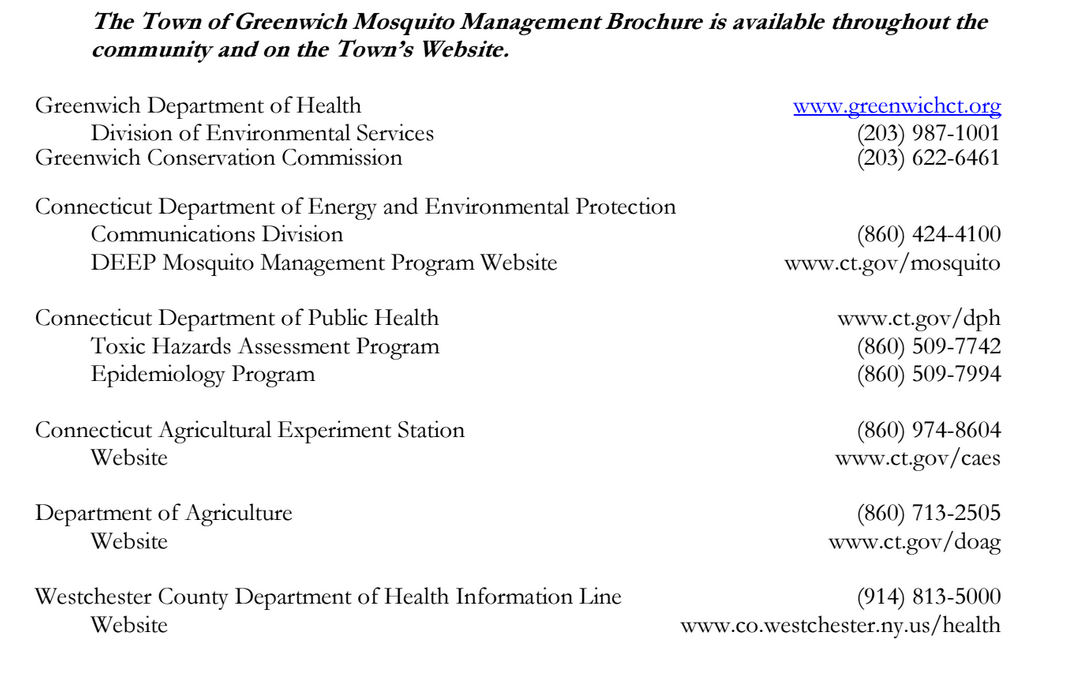