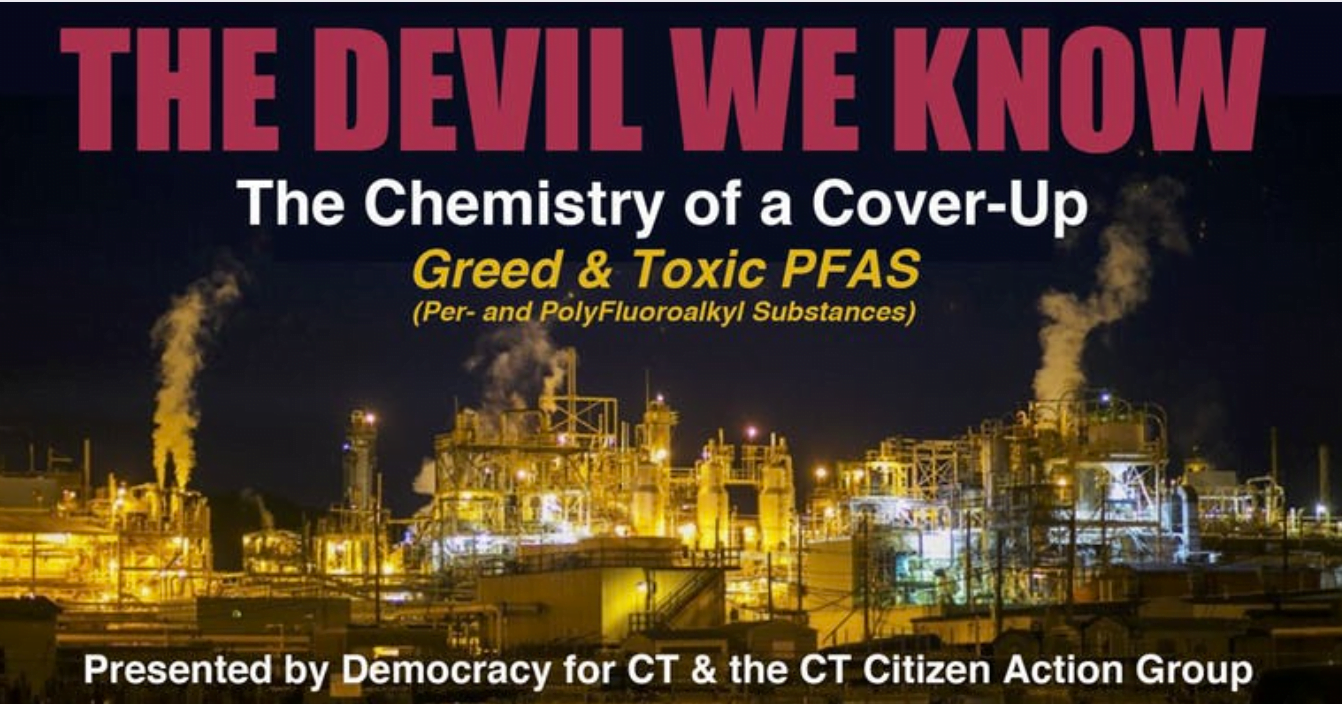 It wasn’t long ago that  officials from the Greenwich Health Dept and State Health Depts answered questions about potential well water contamination in northwest Greenwich.

At the time a chemical called Perfluoroalkyl Substances (PFAS) had been determined to have contaminated well water in the King Street area, near the airport.

Ten wells were tested and one well was found to have PFAS at a level of 70 parts per trillion.

Fast forward a year. On Wednesday, Dec 4 from 7:00pm to 9:00pm there will be a free screening of the environmental film The Devil We Know at the Wall Street Theater in Norwalk.

Tickets are free and can be reserved online.

The film is presented by Democracy for Connecticut and the Connecticut Citizen Action Group, with support from Clean Water Action, the Norwalk River Watershed Association, the Wilton Quaker Meeting, Members of

The Fairfield County Collaborative is a grassroots initiative that focuses on three areas:

Environment and Climate Change, Health Care, and Affordable Housing. This event on Wednesday will focus on the environmental and health hazards of so-called PFAS chemicals.

PFAS (Per-and PolyFluoroAlkyl Substances), a class of more than 4,700 synthetic organic chemicals, have recently entered the national spotlight due to concerns about their potential risk to human health and the environment. They have been manufactured and used worldwide since the 1940s.

They are chemically very stable, heat-resistant, and oil- and water-repellent.

They also have numerous industrial applications such as the class of firefighting foam used to extinguish high-hazard flammable liquid fires at places like airports.

Unfortunately, the unique chemical properties that make PFAS desirable also make them pervasive and persistent once released into the environment.

Since PFAS are not currently known to break down by natural processes, they could persist in the environment indefinitely, earning them the nickname “forever chemicals.”

PFAS compounds bioaccumulate in humans and animals and are suspected in human health problems ranging from physical and developmental issues in fetuses and infants to certain forms of cancer.

“In many other countries, government regulators practice the cautionary principle where new chemicals can only be introduced into the market after they have been proven safe,” said Doug Sutherland of Democracy for CT. “In the US however, chemicals are often not regulated until after they have been on the market for years, distributed throughout the environment, and then are shown to be a hazard. Such is the case with PFAS.”

The Devil We Know is a documentary film about corporate greed, toxic chemicals, and the failure of our government to safeguard our citizens.

Unraveling one of the biggest environmental scandals of our time, a group of citizens in West Virginia took on a powerful corporation after they discovered it had knowingly been dumping a toxic chemical (PTFE aka C8 which is used to manufacture Teflon – now found in the blood of 99.7% of Americans) into the drinking water supply.

The film is a cautionary tale about how corporate profits often trump pubic safety and even commonsense.

Prior to the screening, Louis Rosado Burch from the Citizen Campaign for the Environment and Diane Lauricella, local environmental consultant, activist, and former Fairfield County Sierra Club Chairwoman, will lead a discussion about the PFAS concerns here in Connecticut.

In addition to Greenwich, low levels of PFAS have been found in wells in Norwalk and a large, accidental spill of firefighting foam at Bradley Airport contaminated the Farmington River in June of this year.

In July, Governor Lamont called for the creation of a PFAS Task Force led by DEEP and the Dept of Public Health and in early November, they released their Action Plan.

Lou and Diane will discuss these issues and the legislative agenda for the 2020 session that will focus on curbing the use of PFAS chemicals in Connecticut and setting standards for testing and water quality.

Tickets are free and can be reserved online.

More information about PFAS and the state’s efforts to address the issue can be found at the following links: