The preliminary application for Greenwich train station redevelopment was moved forward to final on Tuesday by P&Z. The vote was unanimous.

The $45 million project includes both a new north and south train stations, elimination of the taxi stand, new drop-off and pick-up lanes, new retail stores, a park with a water feature at the corner of Railroad Ave and Steamboat Rd, and creation of six small movie theaters that would be located on the west side (by Arch Street). The existing theaters would be demolished and replaced with the park.

There was no talk about a deal on air rights, which would ultimately go before the BET and RTM for approval.

Before the end of his last term as First Selectman Peter Tesei put the issue of an MI for the project on “hiatus.”

Incoming First Selectman Fred Camillo has been on record saying the air rights are too valuable to give up and that he’d like to see the Town give Ashforth Company either a tax abatement or pay them.

P&Z has nevertheless continued to work with Ashforth Company on the site plans and gave very positive feedback on Tuesday night.

“I think the applicant has a good sense of what needs to be done and next steps. We need to move from preliminary to final to let them do that.” – Nick Macri

Nick Macri outlined three areas for continued work, including that the train station be user friendly, that the buildings reflect Greenwich’s character, and that the public benefit be adequate.

As for character, he said public input was that the proposed architecture was at odds with input for the POCD.

“It was near unanimous preference that our small town feel, New England charm, and historic character, and the POCD, the station, the retail and cinema were not consistent with what people were saying in the POCD,” he said.

“We’re in support of a bright and airy interior, but recommend the exterior have a far greater preference for Greenwich’s historic character,” he added.

Also, he said, “Even more green space would be beneficial. Even some additional seating outside. We encourage the applicant to reconsider developing a downtown transit overlay. We’re looking at how does it work? How does it fit in? Is it a transit overlay zone? Is it just opening things up? What is that actual benefit?” 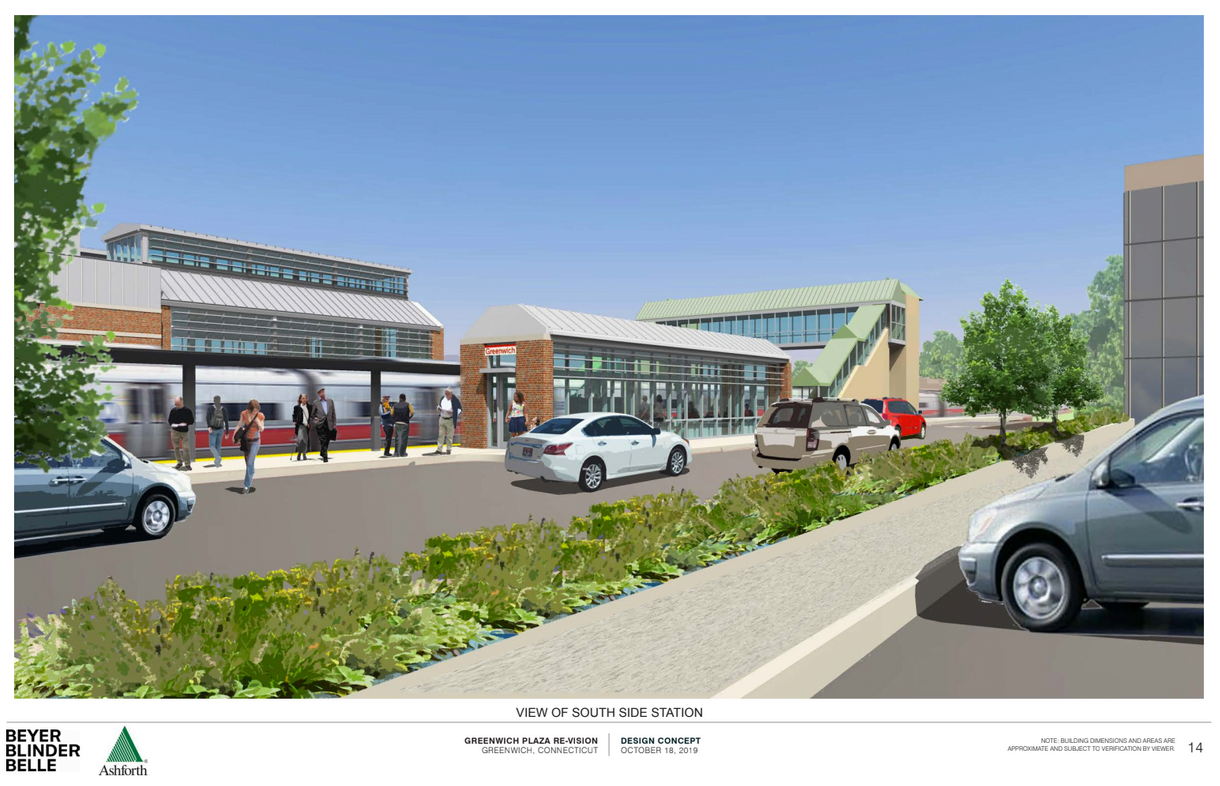 Macri said data from the applicant had been forthcoming, including data on ridership and how amenities increase ridership, but that it might be worth enlarging the station on the south side and possibly including an amenity there.

“People are coming to the station from the west a lot more now,” he said.

There was discussion about the steep slope from the movie theater down to Arch Street and the challenges to growing trees there. Mr. Levy said that issue is unresolved and, over time, there would be similar issues with the park at the corner of Steamboat Rd.

“Be careful about what kinds of plantings you do put in there because there’s not going to be full sun in there, and trees generally like full sun,” Mr. Levy said.

“I think the bottom line is they go work on the design. They have got the input. They know we’re looking at traffic, circulation, effective pick up and drop off, making the station user-friendly,” Ms Alban said. “We’re looking for a station that works as fluidly and effectively as possible, but at the same time that’s part of the community, has amenities we want, and it becomes a hub in town.”

Alban confirmed the commission is very much in favor of retaining the movie theater, the pocket park concept, and the connectivity between downtown and down Steamboat Road, particularly in improving the area of the overpass.

She said the commission hopes the ARC will continue to work with the applicant on architecture, specifically with reference to late 19th century/early 20th century architecture that is prevalent on Greenwich Avenue, and on massing of the buildings and tree-scape.

The vote was unanimous to move the application forward.