After a two hour search, they were returned safely to their home, but the pet’s guardians, The McGoldrick’s, aren’t sure if their outing should be billed as Tobias and Henrik’s Excellent Adventure…or was something more sinister in the works.

You be the judge. 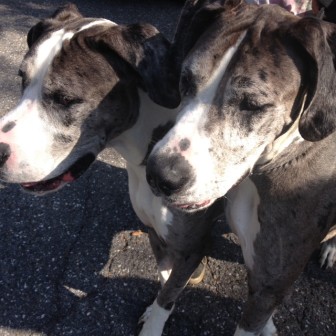 Henrik, right, has a thin white line between his eyes. Tobias has a thicker patch of white fur between his. Credit: Rose Zivic

Last Monday Robert McGoldrick, and his dogs finished their early morning routine; a brisk walk followed by some down time on the secure porch, where they like to lounge and get some fresh air.

When Robert and his dad left for work, the dogs were sunbathing on the porch, in what started out as a typical morning for Tobias and Henrik. But about a half-hour or so later so when Robert’s brother came outside to let the dogs back in…they were gone.

“It had to be Tobias who figured out how to break out. He’s the more adventurous of the two,” said Robert. He adds that Henrik is the dominant dog, but Tobias is definitely the busier one always looking for the next cool thing to discover, bark at, sniff, or eat…like his dog tags that he’s prone to ‘munching’ on from time to time. 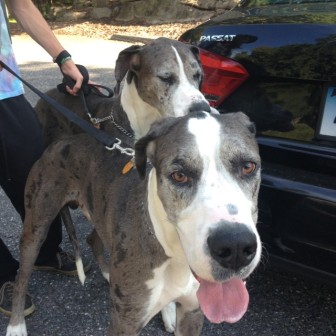 With the dog’s missing Robert and his dad came barreling home from work in Stamford. They spent the next two hours driving and walking through the neighborhood asking anyone and everyone if they saw two Great Danes roaming about. A sight that would not be lost on anyone.

Robert’s dad remembered the first and only other time they broke out two years ago. At that time, they wound up at the Mercedes dealership, not too far from their home. Back then the staff was kind enough to bring them home. 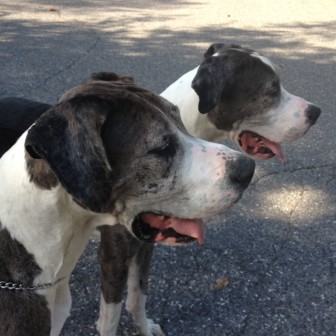 Henrik, foreground, and Tobias are brothers from the same litter. Credit: Rose Zivic

Tobias and Henrik must have remembered that random act of kindness, as they did pay the Mercedes dealership a visit this time around as well. But the workers now were different, and they did not know who the dogs belonged to. They did, however, chase them away from Putnam Ave and back into the neighborhood, hoping they would eventually find their way home.

That news gave the McGoldrick’s some hope…which would quickly be dashed. 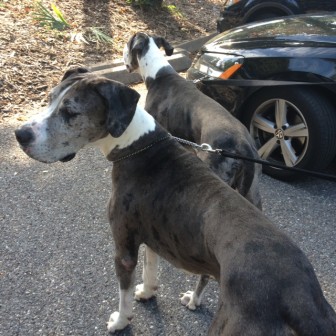 Henrik strikes a regal pose. But does Tobias see something worth ‘exploring’ in the brush?

Back canvassing the neighborhood, one of the neighbors on their street said she saw the dogs walking down the street where they live, seemingly headed back home, when a silver Sienna pulled up and stopped. Two men got out of the vehicle and came onto the neighbor’s property. They told her they were ‘taking the dogs’, and put Tobias and Henrik into their car and drove off.

Both dogs are registered with the town and had their tags on.

At that point Robert and his dad believed Tobias and Henrik were stolen. Not an unusual thought as a neighbor’s dog was stolen off their street a few years back. 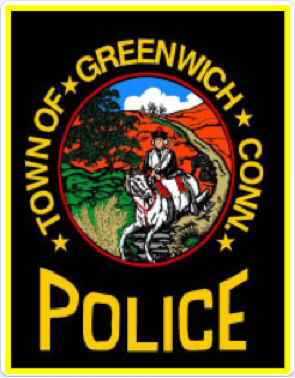 Robert believes, once in the strange car, his dogs must have sensed something was not right.

“I think they must have started barking and growling and freaking the guys out,” he said. If that did happen, Robert added, it would have been Tobias who started the whole thing. “Yeah, I could just see Tobias getting rowdy in the back seat, which may have led to them being dumped out of the car.”

And dumped they were.

The last reported sighting was them driving off in a vehicle with two men. Shortly after, they were spotted roaming on Oak Street, by the McDonald’s, dangerously close to the bustling traffic on the Post Road. It was then that someone called the police, which led to Tobias and Henrik being reunited with Robert and his dad.

You have to wonder…if you found two dogs roaming the street as stunning and well maintained as Tobias and Henrik and you kindly took them into your car, then felt uneasy by two dogs the size of ponies in your back seat, wouldn’t you call the police to come give you a hand?

And if you felt the need to let them out of your car for whatever reason, wouldn’t you have kept the police on the line as your tried your best to follow them, giving details of their whereabouts as you trailed behind?

Whatever these men had in store for Tobias and Henrik, we will never know for sure. Possibly they just ‘gave up’ on a good deed. Possibly not.

The only thing we do know for sure? Robert says he is reinforcing the porch to make it “Tobias-proof.”