The Nathaniel Witherell recently hosted the first of its quarterly “Pooches on Parade” programs for 2015.

The highly anticipated event attracted 14 four-legged friends that mingled with dozens of Witherell residents in the facility’s spacious auditorium.

The dogs were joined by their human companions, including staff, family members, volunteers, and members of the community.

During the program, each owner came up to the microphone, and introduced their dog to the crowd.

For the remainder of the hour, the dogs and their owners “worked the room” and socialized with Witherell residents. 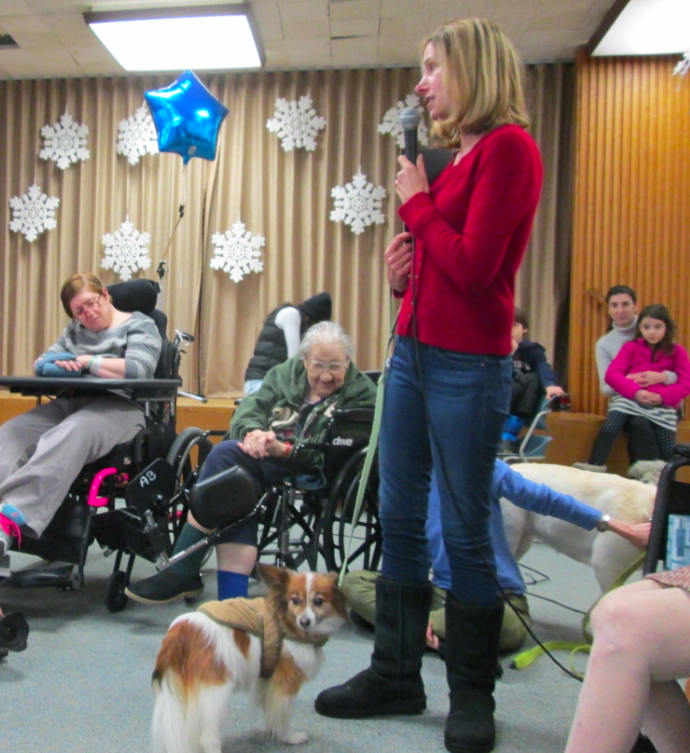 Greenwich resident Lisa Wysocki brought her Papillon “Jean Pierre,” a rescue dog that has attended Pooches on Parade many times. Wysocki also brings her cat, Jackson, twice a month to Witherell’s “Cat Club.” A lap cat, Jackson enjoys being passed around by our cat lovers. Wysocki, a true pet advocate, is co-founder of Fido Fixers, a charity that sends mobile units around the southeastern part of the United States to provide spaying services.

“The informal part is the individual dog and owner teams who come in and go around the building on their own, coming when it is convenient for them and working it into their own schedules,” Van Leeuwen said, adding, “The Witherell has regular weekday as well as weekend pet therapy volunteers. They usually spend 30 to 60 minutes going around the building and interacting with any dog lovers they come across.”

For more information on bringing your dog to an upcoming Pooches on Parade and/or becoming a Witherell pet therapy volunteer, please call Sally Van Leeuwen at 203.618.4228 or email her at [email protected].

Eleven-year-old Jackie Erensen, a sixth grader at Central Middle School in Greenwich, CT, came with her dog Lucy, a mixed breed that Jackie’s family adopted from the ASPCA in New York City. Erensen, who came with her mother, brother and grandmother, told the Witherell that she enjoyed the event so much that she would like  to come back on a regular basis as a pet therapy volunteer.