The dogs stole the show Monday morning at Town Hall during the celebration of the 25 year anniversary of the American’s With Disabilities Act.

Alan Gunzburg attended with his Fidelco service dog, “Kili,” who was exemplary.”Before ADA was passed in 1990, every state had a different rule about service animals,” said Gunzburg, who is a member of the First Selectman’s Committee for People with Disabilities. “If we didn’t have social inclusion — whether it’s the size of buildings, how big doors are, or do the bathrooms work for people –the ADA made that possible.” 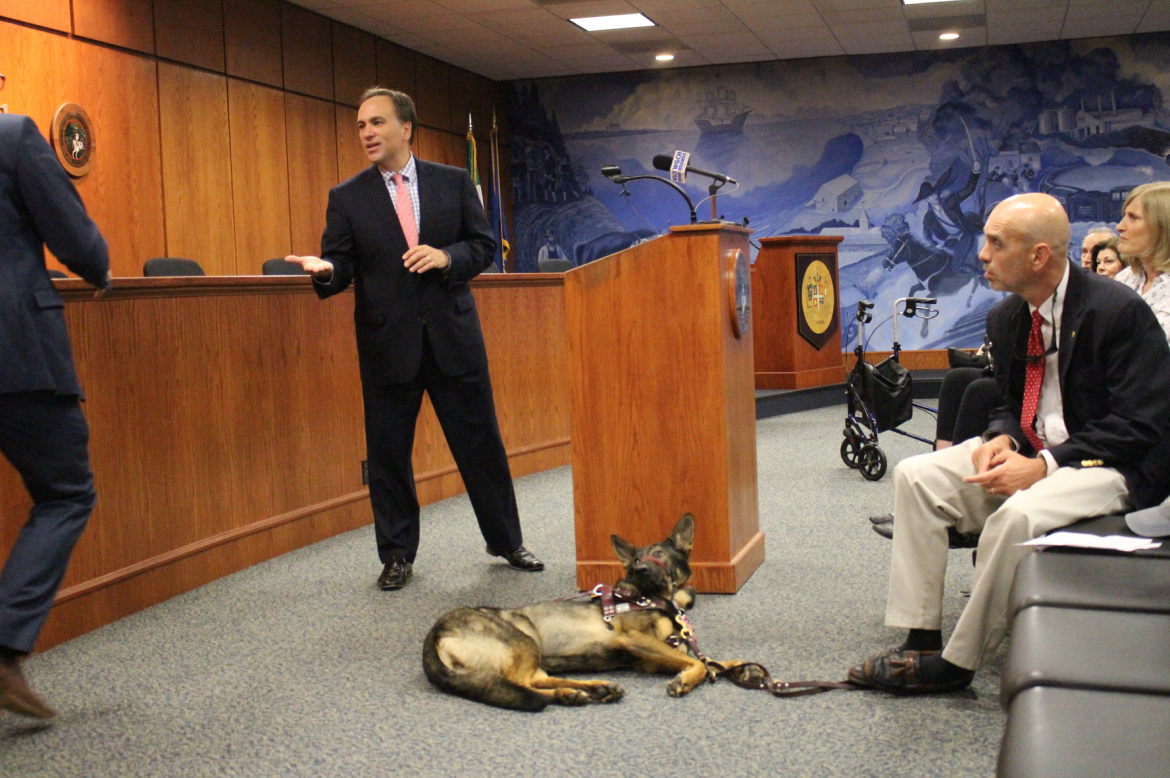 First Selectman Peter Tesei, “Kili,” and Alan Gunzburg in Town Hall on Monday for the 25th anniversary of the Americans with Disabilities Act. Credit: Leslie Yager

In addition to Kili, there were two service dogs in training at Town Hall on Monday morning. Tango, a 9-month-old black Lab is being trained as a service dog for the blind while he stays with Liz Wilbanks.

Wilbanks, who lives in Greenwich, said she’s had Tango since he was 8 weeks old. “He’s just a pleasure to have,” Wilbanks said. “I’ve had dogs all my life and he’s one of the best dogs. He’s very even tempered. The Guiding Eyes for the Blind Foundation has a breeding colony. They’re incredibly intelligent and patient.”

The state law says that Tango can also go to the restaurant as long as he sits quietly under the table. “If he doesn’t behave, I would leave the restaurant,” Liz said. “But up til now he’s been perfect.”

The third dog that attended the celebration of the ADA anniversary was “Norrie,” a beautiful shepherd pup who is staying with Patty Doyle and her family. Doyle, who has five children and two other dogs, said Norrie plays nicely with the other dogs, but when the vest goes on, it’s time to work. 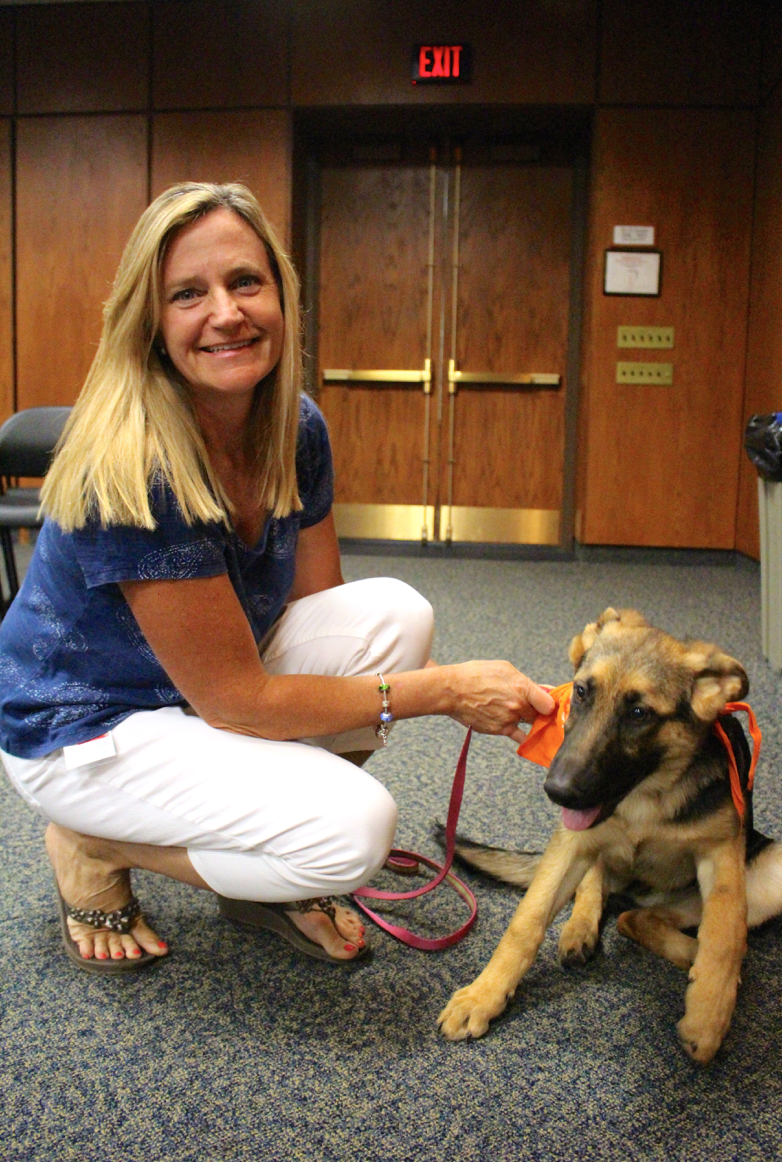 Patty Doyle and “Norrie,” who is in training to become a service dog for Guiding Eyes for the Blind. Credit: Leslie Yager

Part of the training includes a two week swap with another puppy raiser. “It’s to get the dogs used to being with other people and doing the same commands with them,” Doyle said.

Doyle said she was inspired to raise a dog in training from Wilbanks. “I saw her walking Tango and the next day I made a phone call.” Like Wilbanks, Doyle said she tries not to think about the day she’ll have to say goodbye to Norrie, but it is always the first question people ask when they meet her with the puppy. “They ask, ‘How will you ever be able to say goodbye?'” she said.

Gunzburg said the hardest challenge first year was the distractions from other dogs. “That first year I had Kili was rough,” Gunzburg said, using the example of walking at Greenwich Point in the winder when other dogs are allowed in the park. 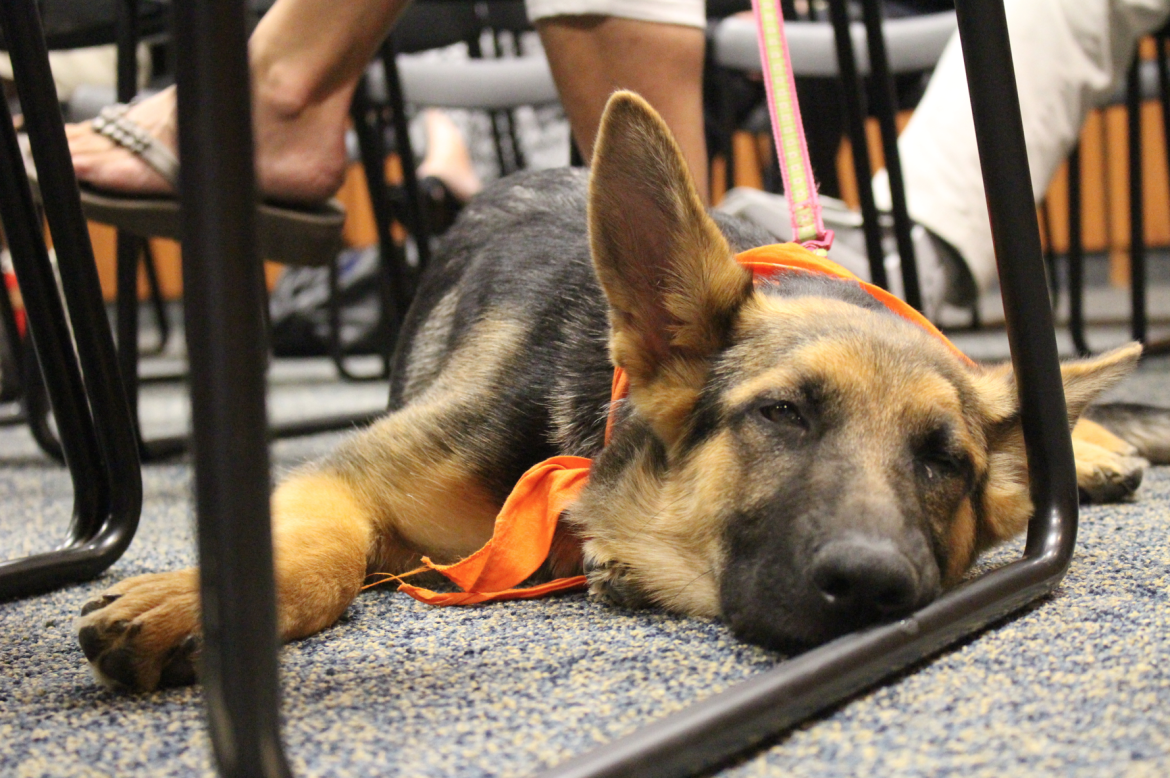 Norrie is living with Patty Doyle and her five kids and two dogs while he learns to be a Guiding Eyes for the Blind dog. Credit: Leslie Yager

“Animals that provide comfort for one person do not qualify as service animals. Under the ADA animals who provide emotional support or companionship have not been trained to perform a specific job or task,” Gunzburg said, though he said therapy dogs do perform an important function. “I see them in hospitals, nursing homes and schools, but they don’t belong in a supermarket.

Gunzburg said he’d stopped at a diner on the way home from visiting his daughter at camp in New Hampshire. According to Gunzburg, the manager approached him to say that just days earlier had had a customer come in with a dog who was barking and making customers unhappy. 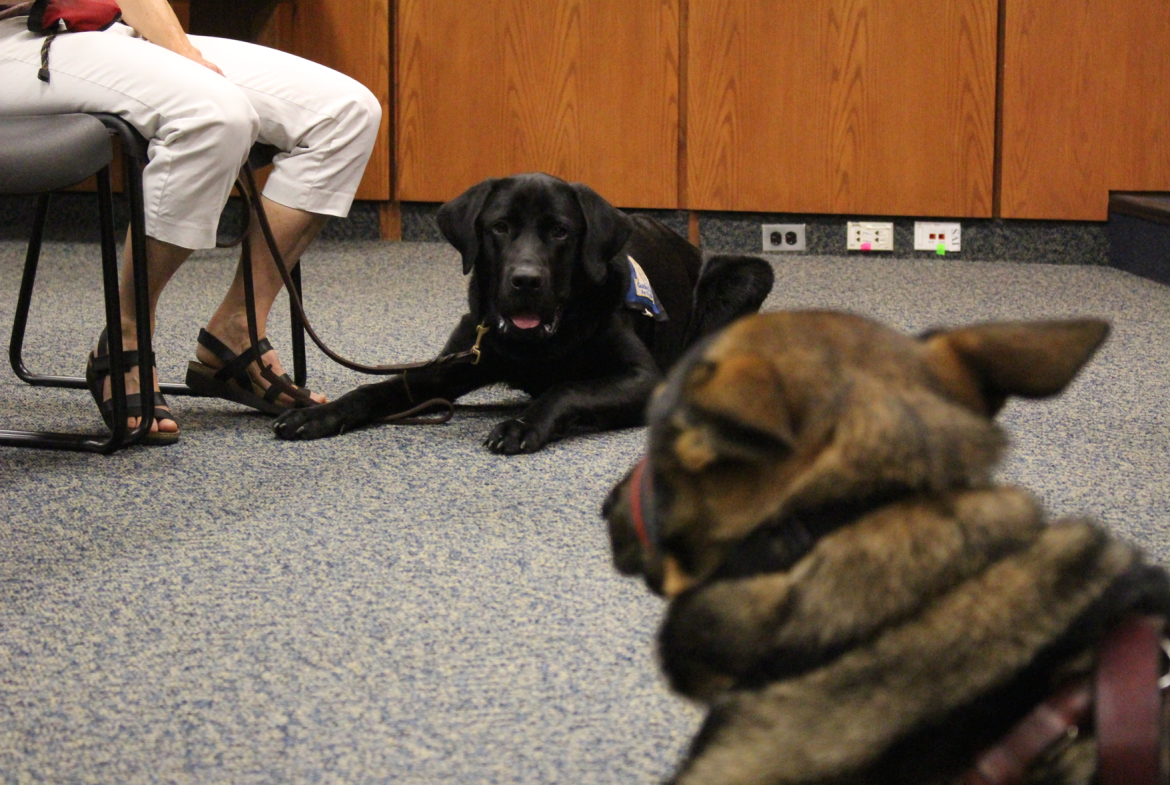 Tango and Kili at the 25 year anniversary of the Americans with Disabilities Act on Monday in Town Hall. Credit: Leslie Yager 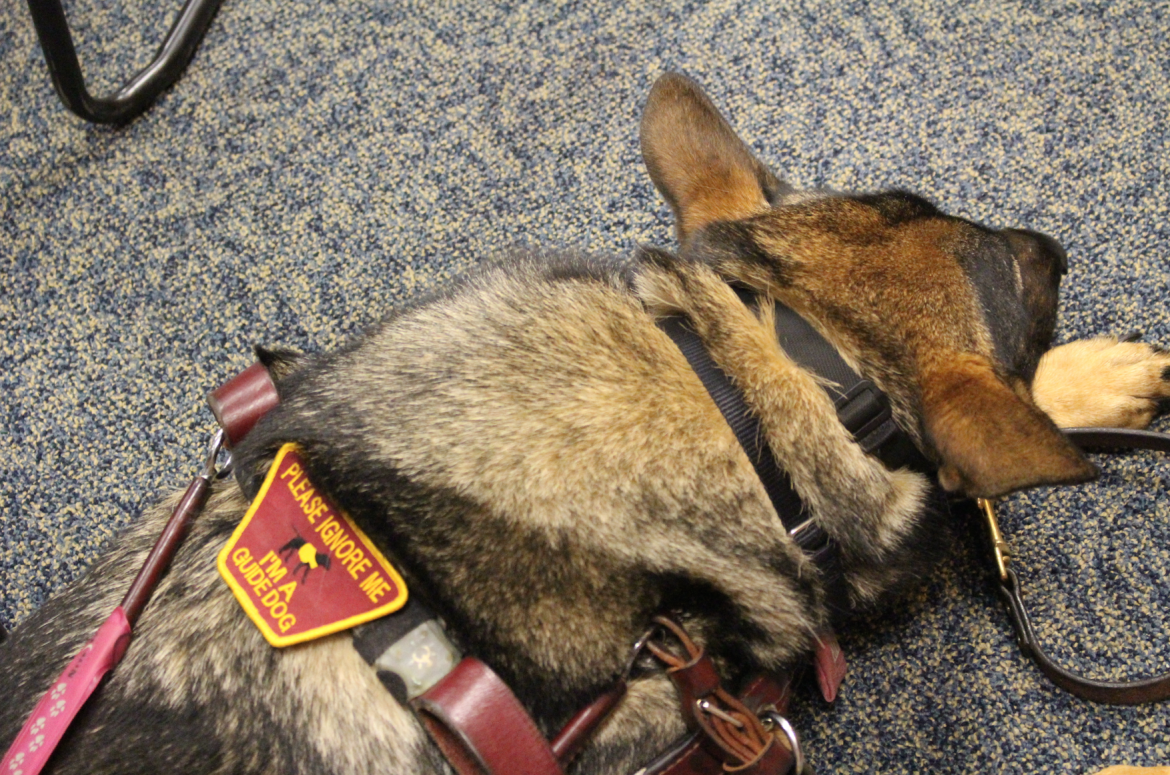 Kili knows when the harness goes on that she is working. She was trained by Fidelco and given to Alan Gunzburg free of charge. She enables him to take brisks walks around the the park at Greenwich Point, among other adventures. Credit: Leslie Yager 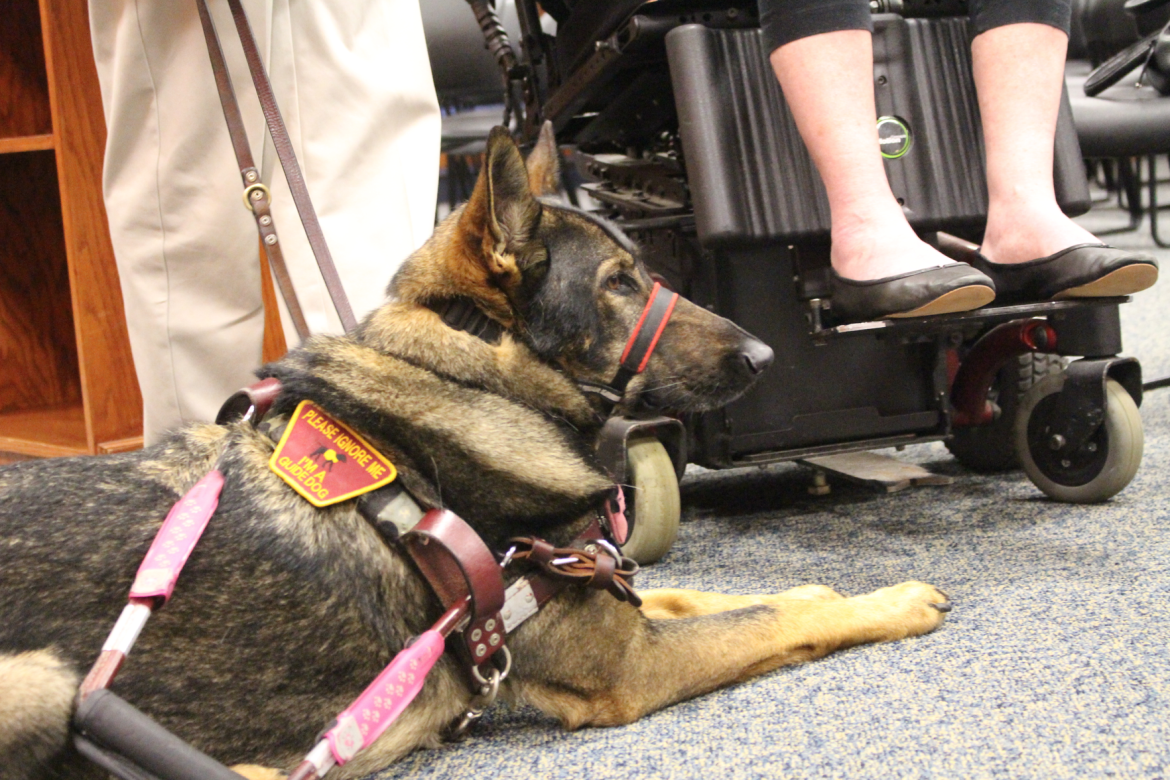 Kili knows when the harness goes on that she is working. She was trained by Fidelco and given to Alan Gunzburg free of charge. She enables him to take brisks walks around the the park at Greenwich Point, among other adventures. Credit: Leslie Yager

That said, Gunzburg said there are is a law for fair housing that says you’re allowed to have a dog when they aren’t otherwise allowed. “That dog doesn’t need special training. It just makes you feel good. There are ‘Emotional Support Animals that can come on the plane with you. According to FAA regulations, that dog is allowed to come with you on a plane. There are therapy dogs who get trained to go to nursing homes, libraries, schools and hospitals. They get public access but they don’t serve the person all day long and help them get around in public. That’s the difference,” he said.

Gunzburg also said there are a lot of fakes and phonies. Online all I have to do is search online for service dog authorization and there are at least a dozen companies that want to sell me an ID. “Neither state nor federal law require an ID for your dog,” he said.