This summer Greenwich Free Press featured the Mondschein family and their two rescue black labs. A few days ago Carol Mondschein shared Double Dog Rescue’s plea for foster families for dogs on their way up from Alabama. 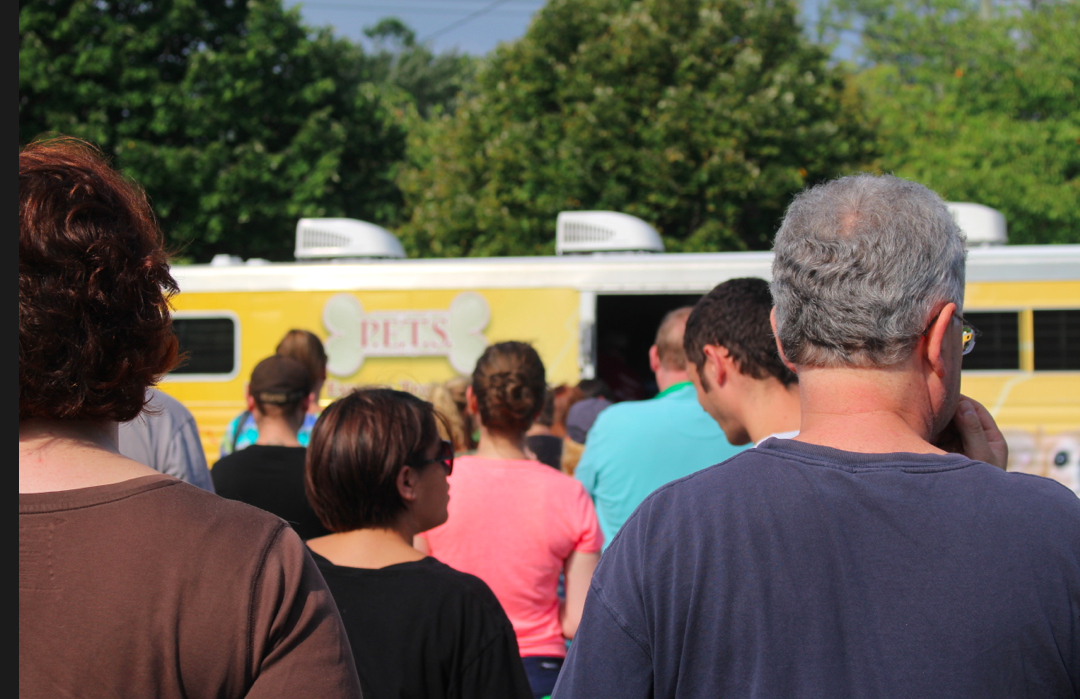 Foster and adoptive families line up in a commuter parking lot in Glastonbury. Dogs destined for volunteers from multiple rescue groups are unloaded. Credit: Leslie Yager

On Saturday a number of families lined up in a commuter parking lot in Glastonbury, awaiting a dog transport. The dogs’ journey had spanned three days.

There is something emotional about watching the extra long truck pull into the parking lot. There is the excitement of saving lives. 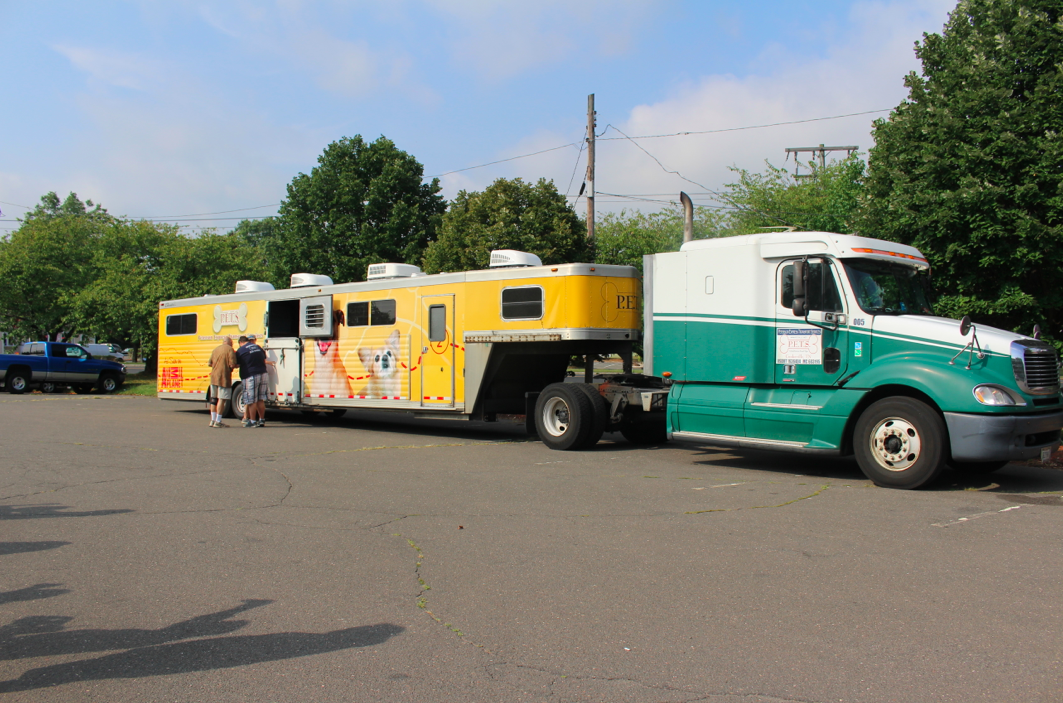 You can see the shadows of the people lined up in the parking lot for the dogs to come off the transport. Credit: Leslie Yager

There is the attempt to imagine the sweltering shelter in Alabama where temperatures reach 105°, with little relief provided by fans. Rumor has it there are a number of dogs down there who succumb to the heat. And, there is the understanding that for every dog on the transport, a much bigger number will be less fortunate. 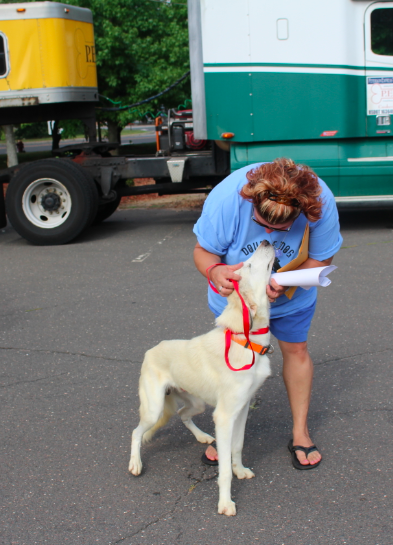 Some volunteers wipe away tears. Some foster families do likewise.

Still, there is busy work to distract us from from thinking too much.

The rescue volunteers who have worked email, Facebook, and phones round the clock for what they joke is “big bucks” with great sarcasm. In the parking lot they have clip boards and printouts. Each foster is provided an envelope containing the dog’s paperwork. A photo of the dog is glued to the outside. 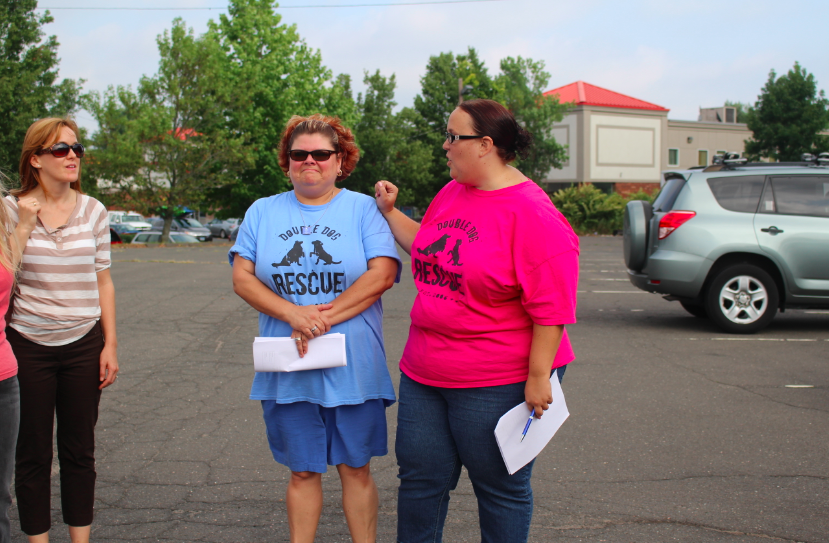 Wrap the temporary leash around your wrist three times to be safe, they say. Expect the dog to be very afraid, or very jumpy. Bring treats, water and a leash with a clasp. Get directions from the rendezvous point to the veterinarian in Windsor and coax a reluctant dog into the car. Treats at the ready, they do make a difference. 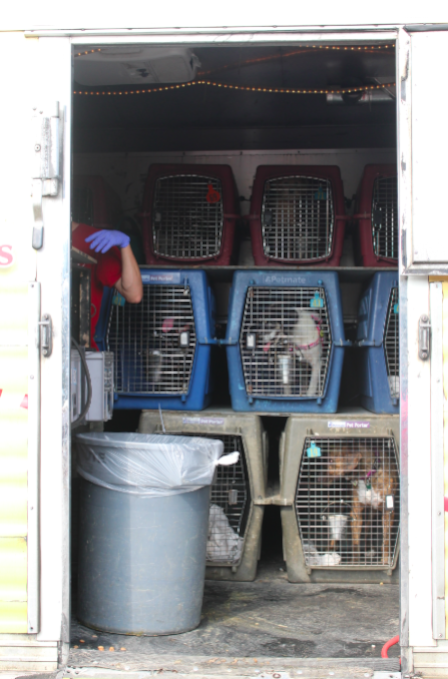 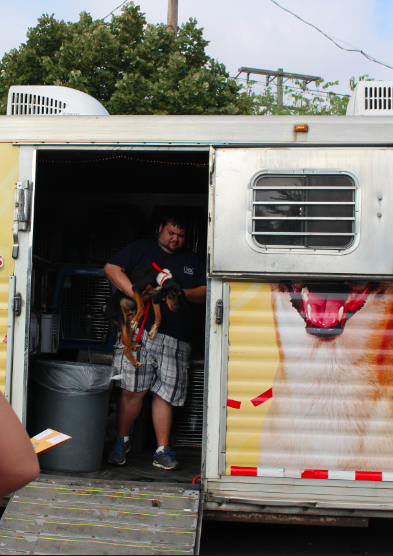 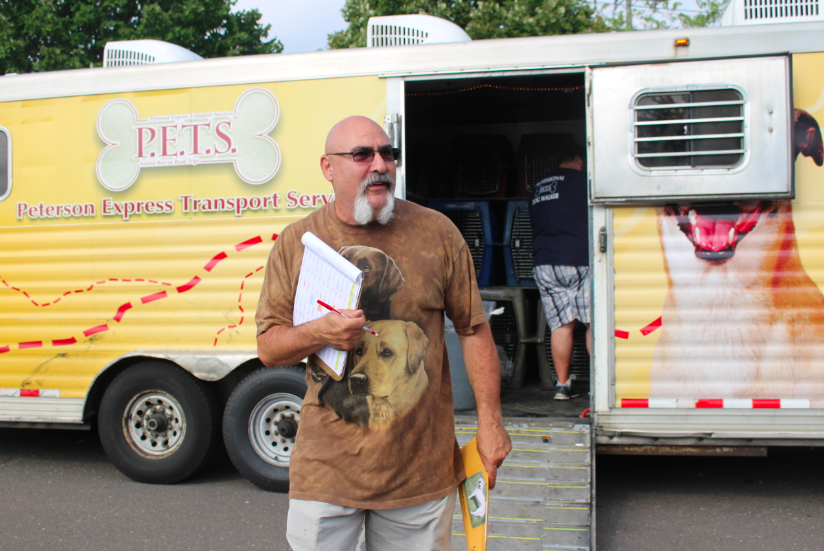 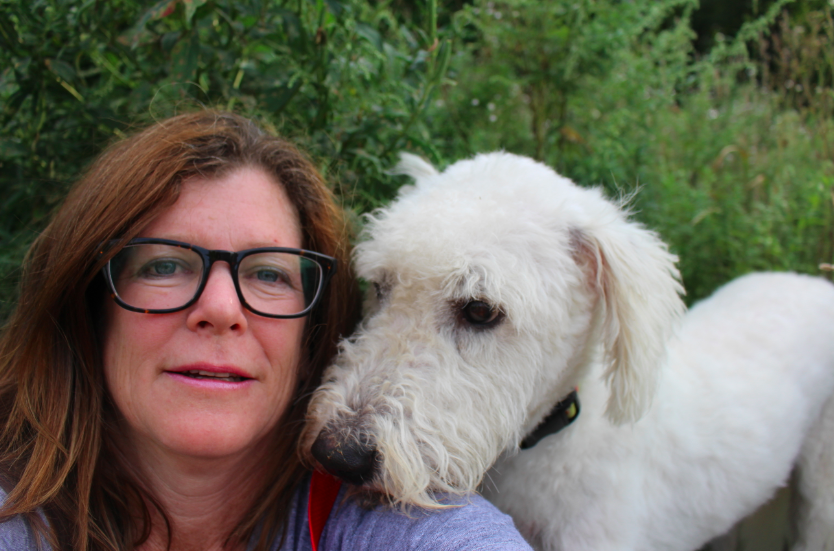 He takes treats very gently and leans against his person. He doesn’t wag his tail. It dips down, but is not wrapped tightly underneath in fear, like one of the other dogs. We take a selfie before rejoining the group. 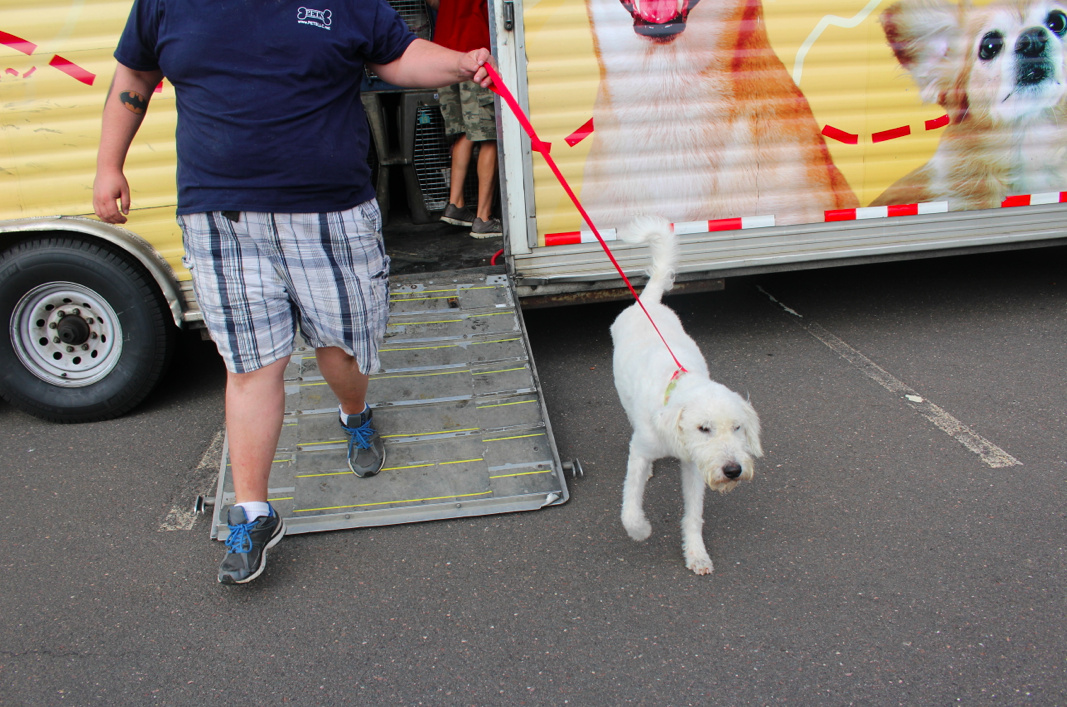 In Glastonbury, Buddy retains his dignity as he is escorted off the transport from Alabama. Credit: Leslie Yager 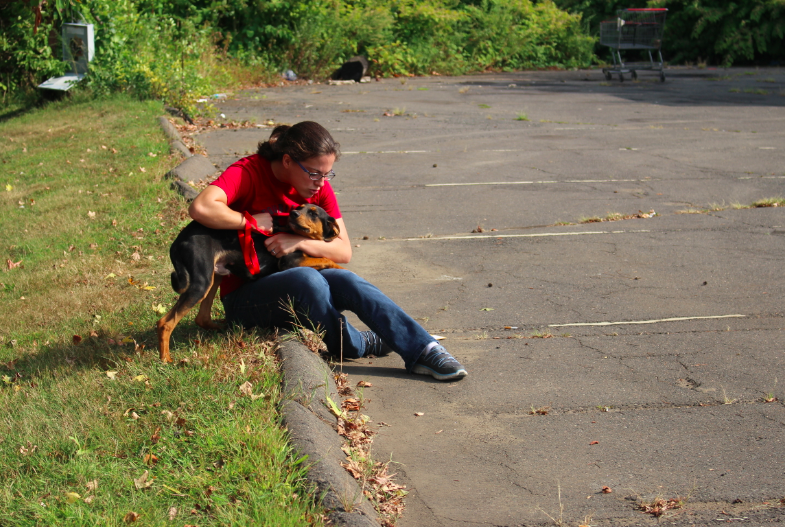 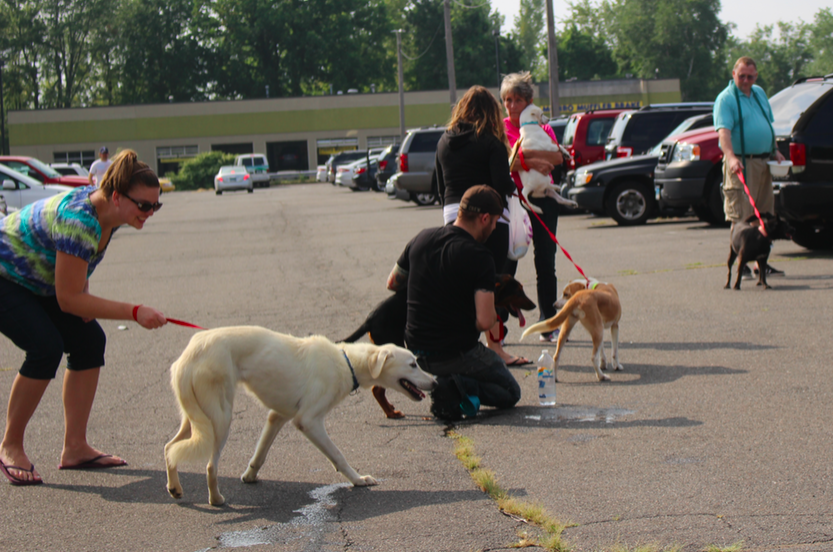 At the New England Veterinary Center and Cancer Care in Windsor, Dr. Mohan Sachdev weighs each of the 17 Alabama dogs who fill the lobby. 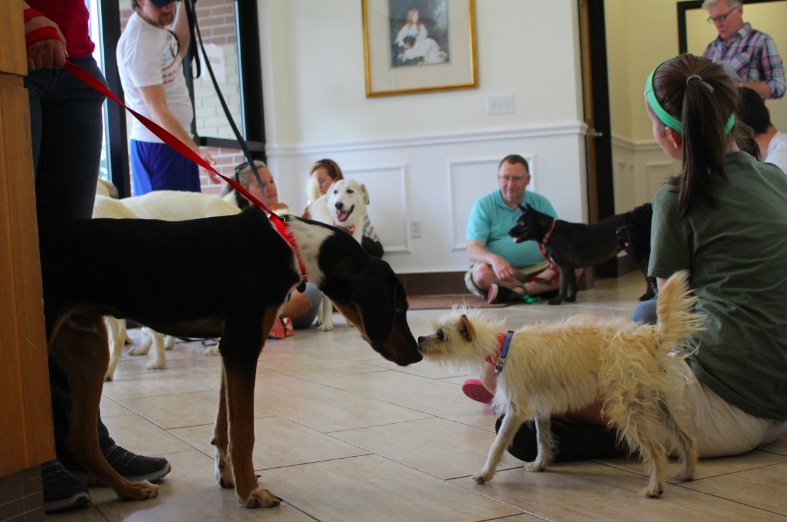 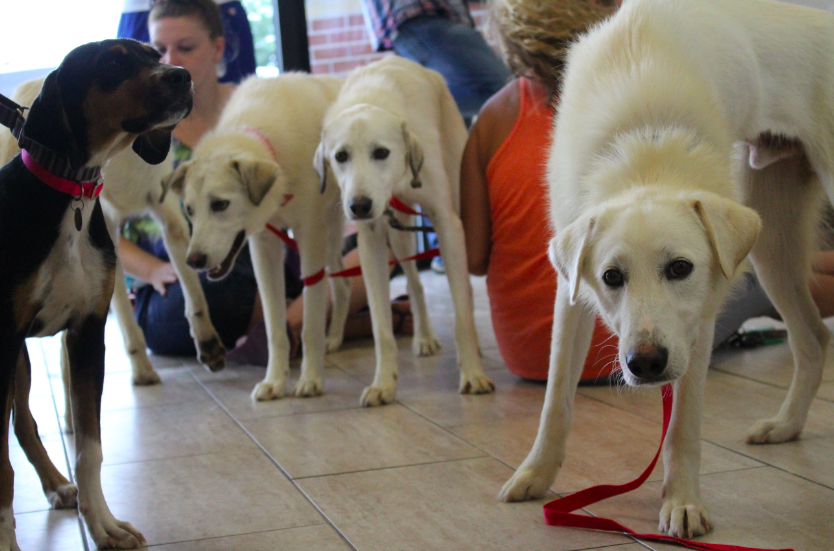 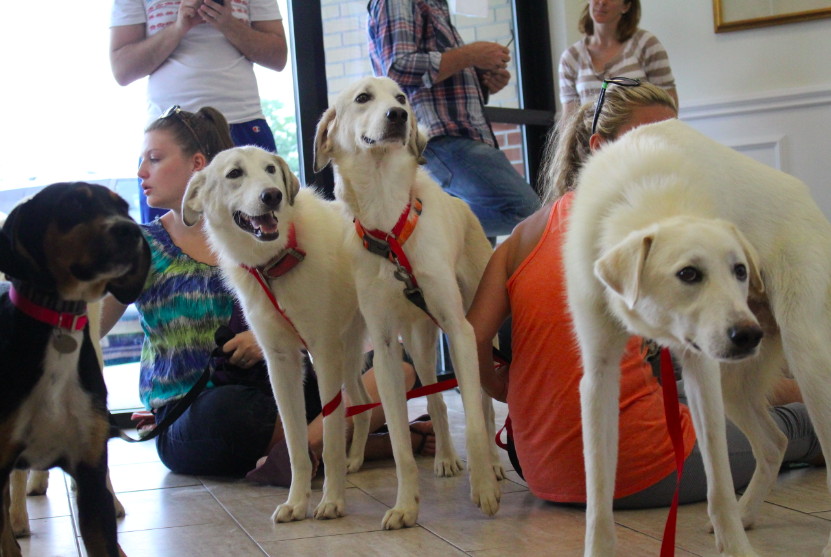 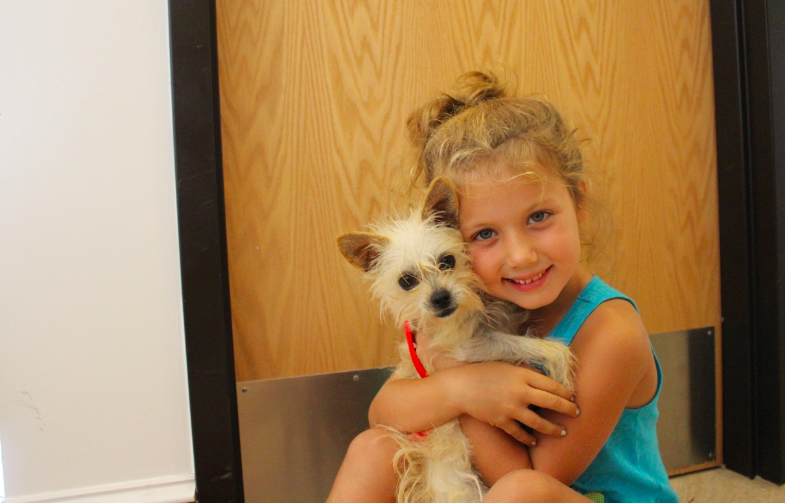 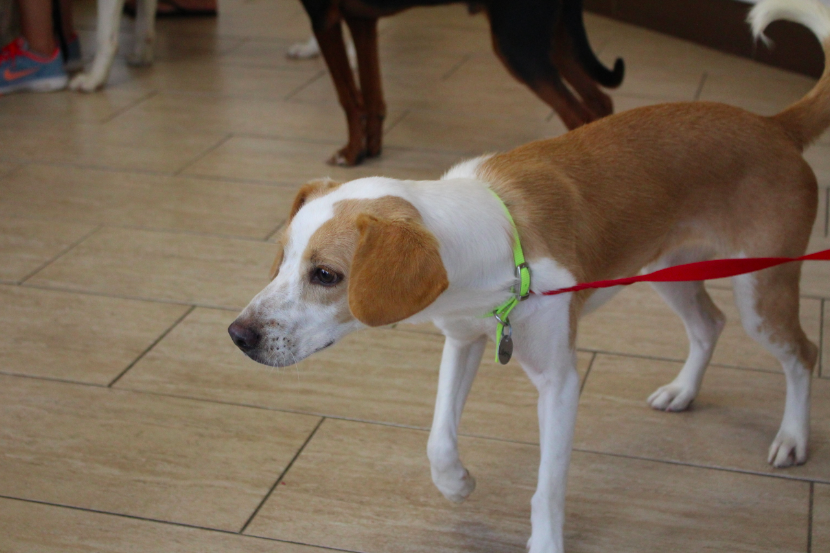 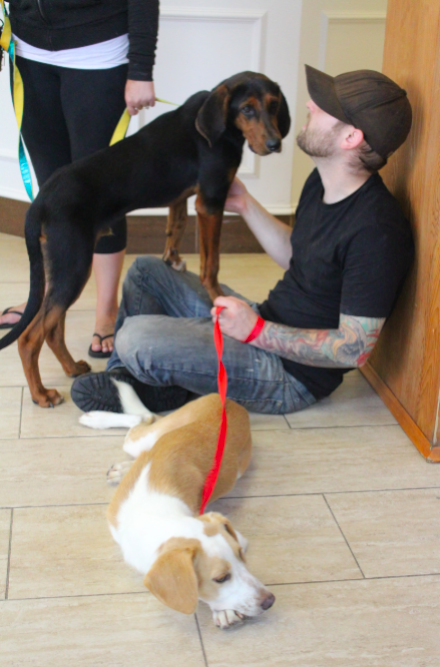 Buddy weighs in at 61 lbs, though his Petfinder page says he weighs 69 lbs. Dr. Sachdev notices a dead flea in Buddy’s recently shaved hair, which reportedly had been badly matted when his owner surrendered him. Buddy complies and steps on the scales with dignity. Or maybe it’s appreciation. Next.

All 17 dogs and their foster families work through the line at the vet. None are small puppies. But none are much older than a year or two.

Buddy, a Great Pyrenees-Poodle mix is estimated to be 1-1/2-years-old. He is a total gentleman. He has long legs and likes to lean against people. He makes great eye contact. Will my two black labs be nice to him at home? I surely hope so. 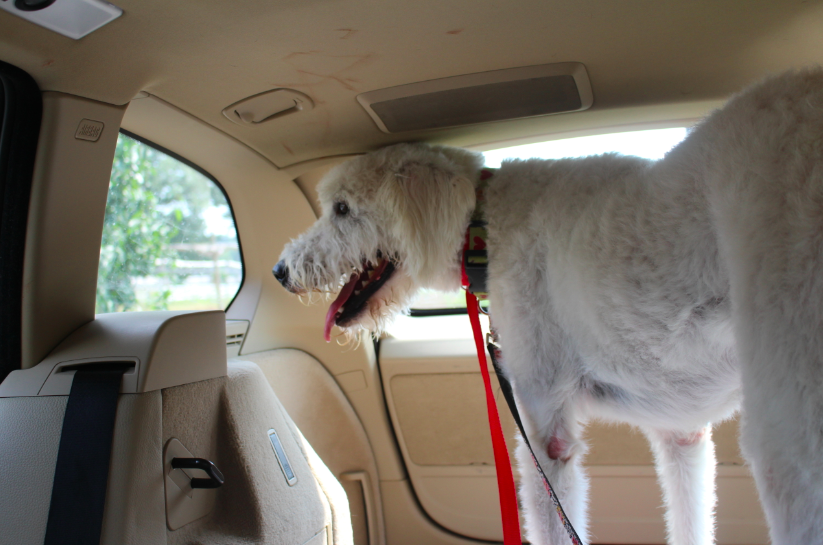 We drive from Windsor back to Greenwich in about 2 hours, and walk all three dogs around the block. Uneventful. This is good. The dogs seem like they already know each other. We invite Buddy up the front steps. There are only four. The two black labs fly up the steps as they’ve done thousands of times. Buddy stops dead at the first step. He’s never been inside a house.

He is perplexed. He puts one tentative paw on the first step and then steps back. A gentle push and instinct kicks in. Sort of. He hops. He trips. Fortunately, he doesn’t fall. He makes it to the front porch and paces every inch, but doesn’t lie down. 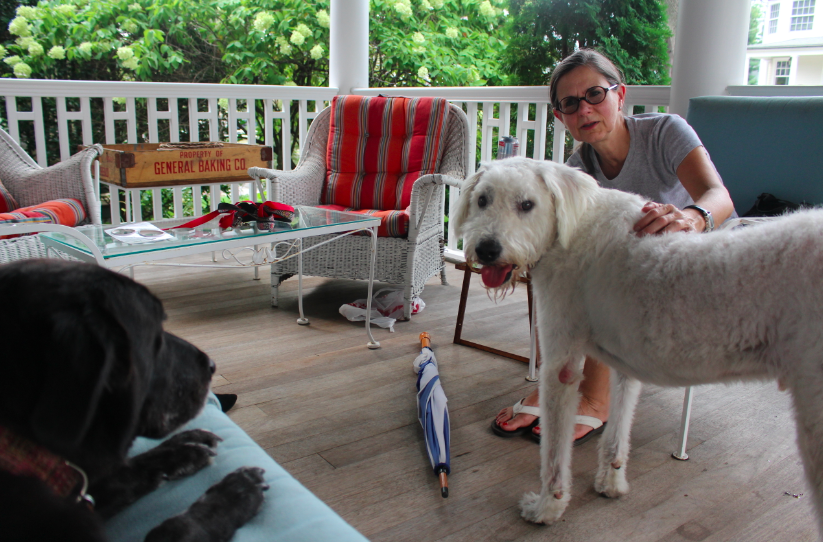 We sit on the porch. It’s hot and humid. Thunder showers are predicted. The dogs are aware of each other but don’t seem bothered. Buddy remains standing, as though he knows he’s the guest. Or maybe his joints are too tender to lie on the hard floor. They are worn bald and are pretty pink. 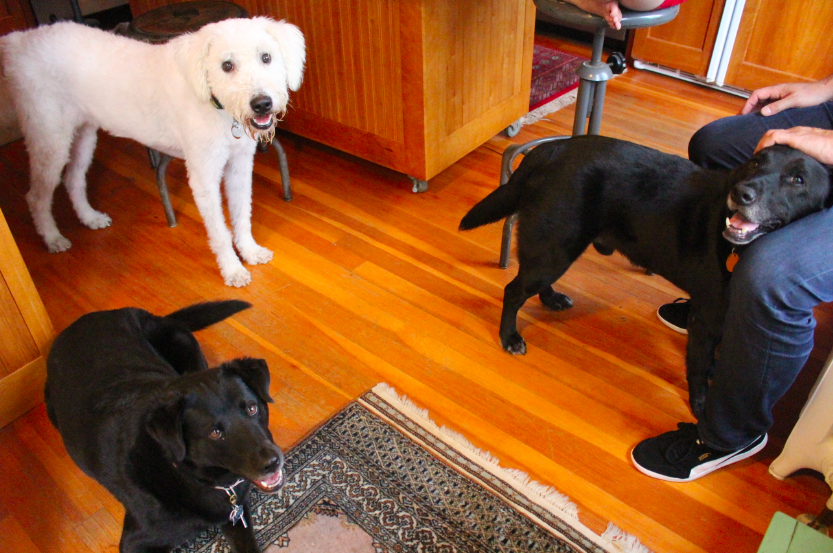 After an hour, we invite Buddy into the air-conditioned house and wonder if he’d ever experienced air conditioning, except maybe inside the transport truck. He doesn’t want to come in the front door. He has never been inside a house. We put the leash back on and nudge him across the threshold.

He explores the rooms, the furniture. Looks out every window. He decides he likes the kitchen and finally lies down on the runner in front of the sink.

Dinner time comes early because Buddy guzzled 4 bowls of water since getting off the truck and is probably as hungry as he was thirsty. 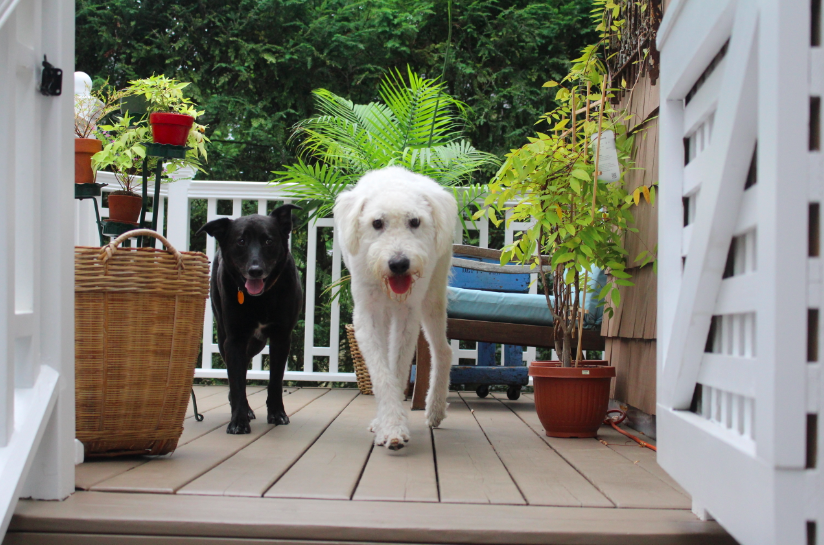 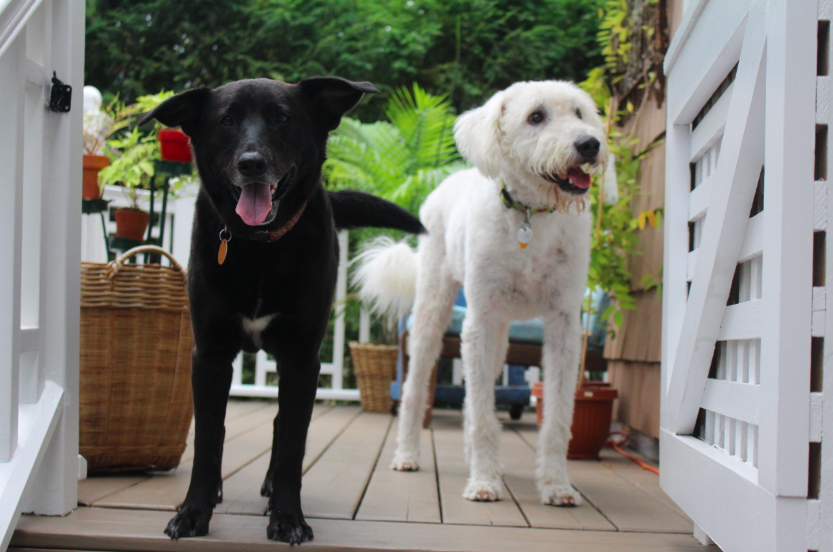 A minor set back. Buddy stands at the top of the stairs to the back yard and looks down with what? Trepidation? It takes three of us to help him down the stairs. He has such long legs. He’s so overwhelmed when he gets to the back yard that he forgets to relieve himself and, after a clumsy, assisted retreat up the back stairs, he relieves himself inside the front door. It’s okay.

It’s 8:00pm and Buddy, who decided looks more like a Henry, is asleep on the kitchen floor.

Anyone looking to adopt Buddy should go to his Petfinder page on Double Dog and contact his adoption coordinator, Jane at [email protected]

He is being fostered by the editor of Greenwich Free Press in Greenwich.

Every word of the description on Petfinder rings true. This is a gentleman who has not given up on people by any means. The only inaccuracy is that he no longer weighs 69 lbs. The vet in Windsor said he weighs 61 lbs. Maybe he lost weight due to stress and being given up by his neglectful owner.

For more information on Double Dog Rescue visit their website.