Over the weekend a photo posted on Facebook by a relative of Donald Repaci drew internet gasps.

Where once there was a majestic Oak tree memorializing the Vietnam War hero, three mounds of wood chips surrounded the bronze plaque dedicated to the Byram Boy who gave his life at the age of 20.

On Saturday, Liz Eckert wrote on a public Facebook group “YA PROBABLY FROM BYRAM IF……” that she had visited her brother-in-law’s memorial only to find that the Town had cut down his monument tree.

Without knowing the Town’s reason for cutting the tree, Eckert and the numerous members of the community were outraged.

“The town of Greenwich cut down his monument tree at the Byram School without informing anyone in our family. This pile of sawdust is what we arrived to today. There are no words…,” Eckert wrote in her post.

She posted a second photo of Repaci’s medals and a memo from the Dept of the Army 9th Infantry Division dated April 15, 1969 on his award of the Bronze Star metal for “heroism in connection with military actions involving conflict with an armed hostile force in the Republic of Vietnam: Private First Class Repaci distinguished himself by valorous actions on 21 March 1969 while serving as a Rifleman with Company D, 3d Battalion, 39th Infantry on a night ambush patrol near Vinh Kim. After sighting an enemy element approaching, Private Repaci courageously exposed himself to warn his comrades of the encroaching danger. Daring the ensuing battle, Private Repaci was critically wounded, but moved through the hail of enemy fire to aid other casualties until he succumbed to his wounds. Private First Class Repaci’s personal bravery and devotion to duty were in keeping with the highest traditions of the military service and reflect great credit upon himself, the 9th Infantry Division and the United States Army.”

Repaci’s plaque is one of 13, each of which is mounted to a stone pedestal, to represent 13 Byram School alumni who perished in service of their country in WWII, Korea and Vietnam.

A 2016 piece for Veterans Day in Greenwich Free Press, “Byram Veterans Memorialized for All Time under Magnificent Sycamores at Former Byram School,” featured the monuments including Donald Repaci’s. 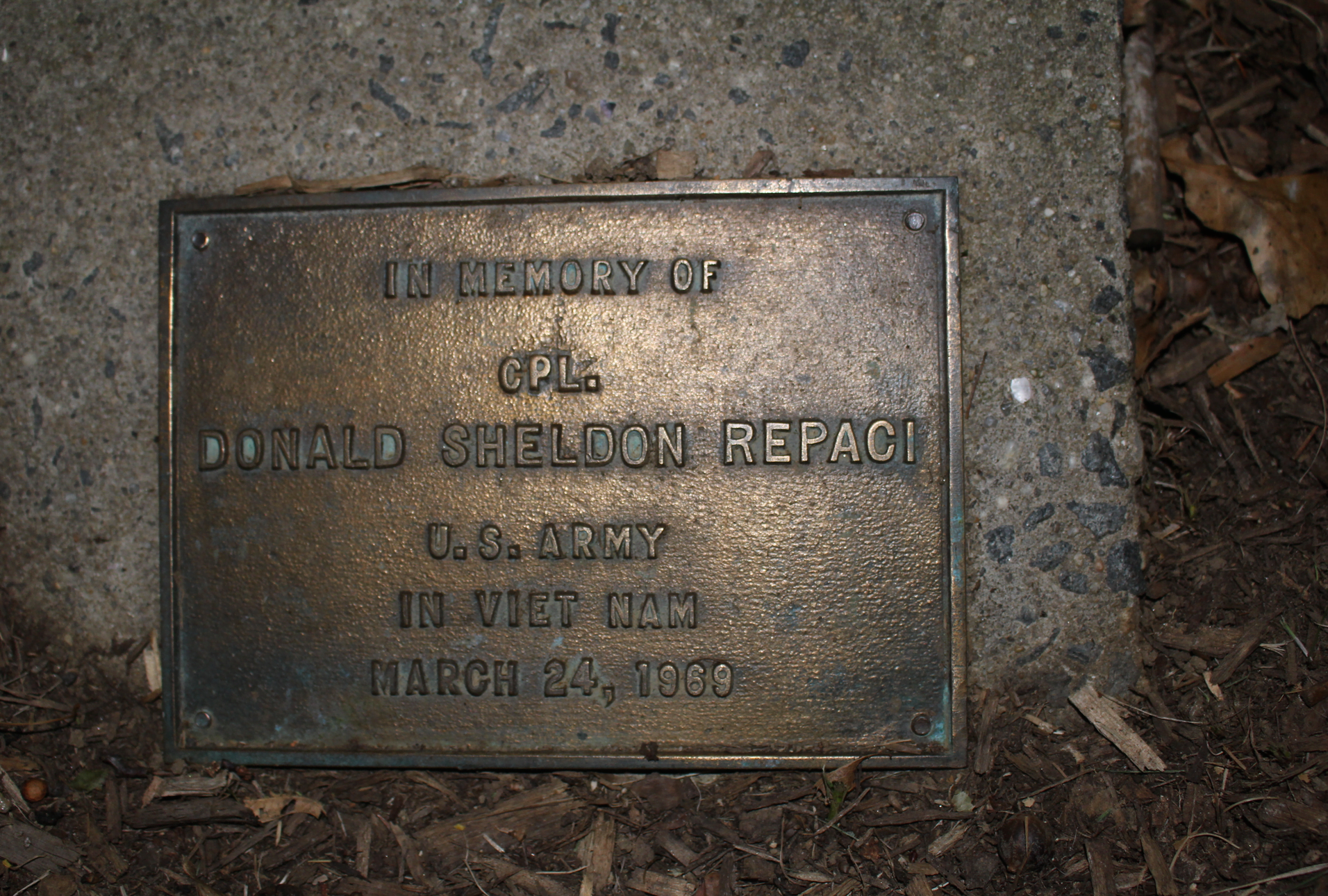 At the time, a new playground at Byram Park was in the works to be dedicated to Anne M. Kristoff, a nurse, parent and longtime Byram resident who died of lung disease at just 46, but left her mark on Greenwich.

Kristoff fought to preserve the trees on the property of the former Byram School, and in 1986 fought the Town after veterans markers were removed.

Kristoff’s daughter, also named Anne, told GFP in 2016 that her mother had been relentless when the veterans markers were removed and mounted onto a black piece of marble, and would not take no for an answer. The plaques were returned.

Fortunately, the deputy tree warden, Steve Gospodinoff, got word of the Facebook thread and jumped in to explain the situation.

He said the Oak tree came down in a storm and regretted it could not be saved.

“I was born and raised in Greenwich my uncles were war hero’s in WW2 as well as my dad a WW2 and Korean War vet. I hold this ground SACRED!” Gospodinoff wrote in his post. “Unfortunately this tree broke in half during one of our winter storms. We are going to replant another Oak Tree in that same spot.”

Gospodinoff explained that the saw dust was the result of stump grinding to prepare the area for a new tree.

“In the future, if any other Tree is damaged in this area as a result of a storm. I will communicate with the Byram Vets,” he added.

“I take full responsibility for this. Next time if any veteran memorial tree is damaged I will report to the appropriate organizations,” Gospodinoff promised.

And while the comments lamented the family had not been informed of the tree coming down in advance and had to find out in the way they did, the comments in response to Mr. Gospodinoff were forgiving and respectful.

This story will be updated when there are specifics about the new Oak tree and the dedication on Memorial Day this May. 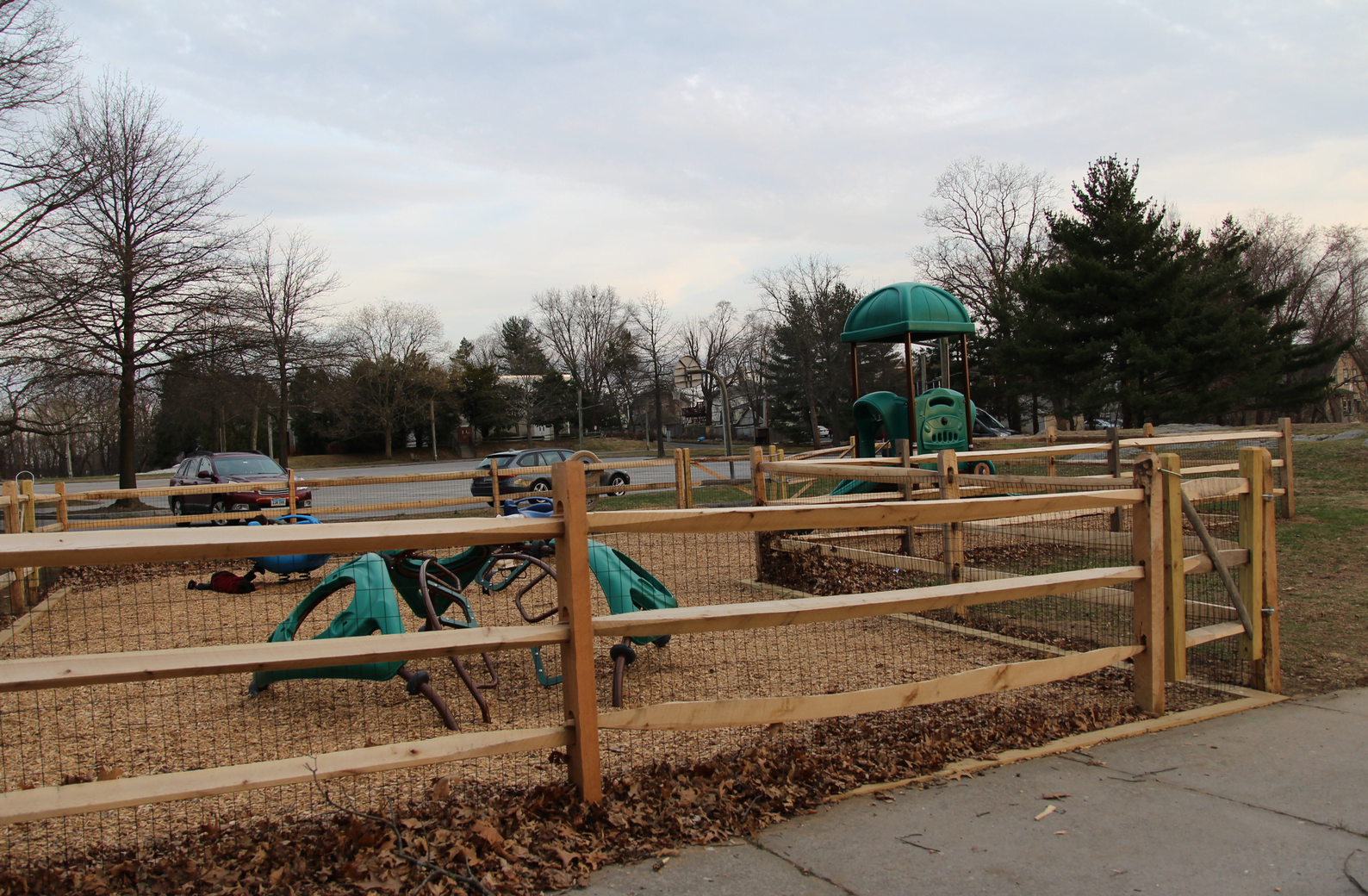 In Byram, a new playground adjacent to the 13 plaques for Greenwich men who served to their country in WWII, Korea and Vietnam. March 30, 2019 Photo: Leslie Yager