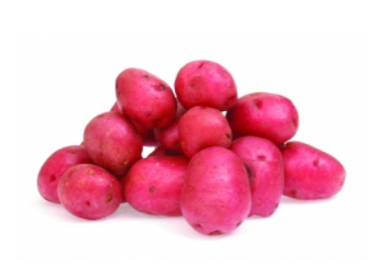 Everyone likes potatoes so I’ve put together three separate potato recipes to pair with whatever you’re main dish happens to be. 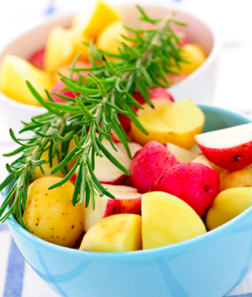 Preheat oven to 425 degrees. Brush potatoes with olive oil to coat. Spread
potatoes in shallow baking pan. Bake for 15 to 20 minutes or just until
potatoes are barely tender. Do not overbake potatoes, as they will need to hold their shape. Remove from oven and cut each potato in half crosswise.

Meanwhile, in a small-size bowl blend ham, pineapple, chives, and cashews. Using a melon baller (or spoon) gently scoop centers from cut side of potatoes. Leave at least 1/4 inch shell. Place removed potatoes into bowl, cover with plastic wrap, and place in fridge for a future use. We here at Tiny New York Kitchen never like to throw food away! Stand potato shells upright (you may need to cut a very small piece off bottom to make
them stand upright). Take about 1 tablespoonful of ham mixture and place  into each potato shell. Garnish with additional chives if desired. Serve immediately. Serves 4

Preheat oven to 425 degrees. Wash potatoes and pat dry. Place potatoes in 3 quart saucepan. Cover with water. Bring to boil and cook over medium heat for 10 minutes or until slightly tender. In roasting pan combine potatoes, olive oil, balsamic vinegar, rosemary, thyme, kosher salt and pepper. Toss to coat. Place in oven and roast for 20 minutes or until tender and golden brown. Stir once or twice during roasting. Remove from oven and transfer to serving bowl. Serve warm. Serves 4 to 6